When Artists Map Memories of Home and Exile

Imperious power narratives have been blind to the lived reality of rootedness, from Partition to the CAA and NRC. It is artists who ask, what constitutes home and belonging? 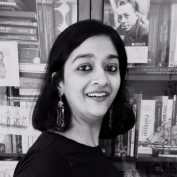 In a country that marked the beginning of 2020 with peaceful, nationwide protests against the Citizenship Amendment Act (CAA), saw an unimaginable dislocation of migrant workers during the COVID-19 lockdown and is days away from the 73rd anniversary of Partition, the need to question exclusionary narratives has assumed utmost urgency.

In over seven decades, South Asia has seen more than its share of political ruptures and conflicts, sectarian strife, environmental disasters, and pandemic, triggering forced displacement. It has provided many a context for artists to explore the idea of home and exile, contoured by memory.

By re-imagining their – and our – relationship with our pasts, individual and collective, artists emerging from a South Asian context have created maps of empathy that question unidimensional power narratives largely impervious to the human cost they exact.

One artist who immediately comes to mind is the internationally acclaimed, minimalist printmaker Zarina Hashmi (1937-2020). Born in Aligarh, India (her family migrated to Pakistan in the 1950s), she lived in several cities across the world with her diplomat husband and, following his untimely demise, decided to base herself out of New York in the mid-1970s. On her passing, critic and curator Ranjit Hoskote posted, “She was 10 when borders not of her choosing changed her life; she spent her life defying borders and the exclusionary claims of territories, learning from diverse teachers, always true to the compass of a lost home”. Zarina’s monochromatic works such as Dividing Line and Atlas of My World, (woodcuts on Indian handmade paper, 2001) denaturalise the idea of borders and boundaries. In the former, the irregular line drawn across a page, recalling the Radcliffe Line which cleaved the Indian Subcontinent, is a forceful pointer to the arbitrary way in which political boundaries are drawn – it subverts the fixity of the official narrative built around Partition.

About the work, which was part of the artist’s exhibition, Zarina’s show Zarina: Paper like skin, at the Guggenheim (New York) in 2013, art critic Karen Rosenberg said, “To represent the border between the countries, she did not simply carve the snaking diagonal out of the wooden printing block; instead she gouged out the surrounding space, making clear that adjusting national boundaries is never as simple as drawing a line on a map.”

Also read: Through the Lens of History: How the Past Serves the Present

Similarly, it is Zarina’s personal memories which define the cartography of her Atlas of life and journeys. The absence – loss – of the home is the biggest presence in her autobiographical works. Sometimes it’s a map, with words written in Urdu, her mother tongue, sometimes the abstraction of Mughal architectural markers as pure geometric abstraction, and at other times it is the memory of travels with her sister Rani – all of them markers of her personal history set against the backdrop of the larger, imperious and impervious framework of geo-politics. 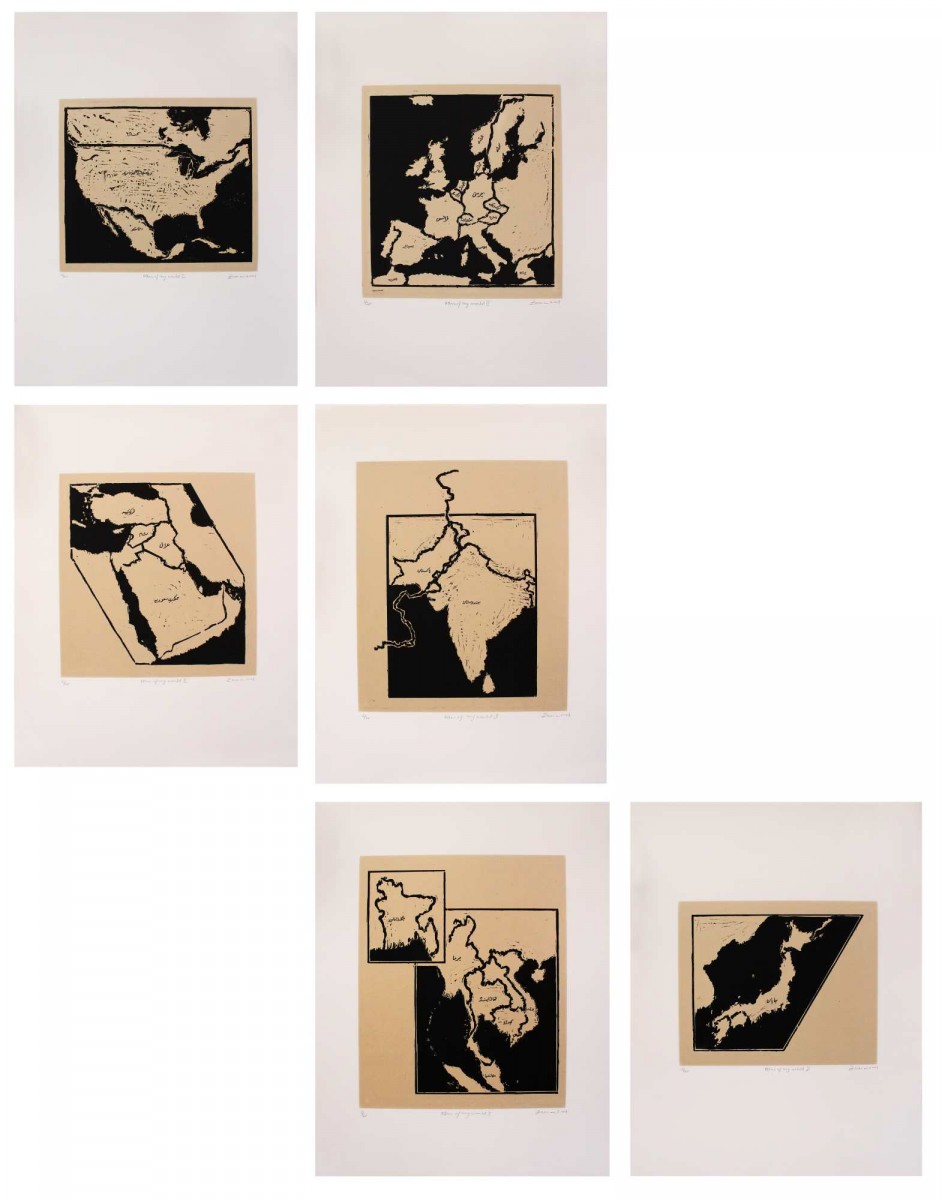 ‘Atlas of My World’ (2001) by Zarina; portfolio of six woodcuts with Urdu text printed in black on Indian handmade paper. Photo: Courtesy of Gallery Espace

These journeys of memory were made on paper, Zarina’s favourite medium. It was almost like skin, she said. As she told S. Kalidas, “It can be stained, pierced and moulded and it still has the capability of breathing and ageing. It has a fragility and resilience.” A perfect medium to trace the fragility and resilience of the human spirit, paper became an extension of her experience of displacement as well as the home and universe that was lost to her in 1947.

While describing her artwork, Cities I Called Home (2010) she remarked, “There is truth to the phrase, ‘You can never go home again.’ I do not feel at home anywhere, but the idea of home follows me wherever I go.”

The thread of personal histories trapped in the official narrative of geo-politics is to be seen across South Asia. In Bangladesh (which became East Pakistan post-Partition and declared its independence in 1971), Dhaka-based multimedia artist Mahbubur Rahman (b. 1969) seeks to challenge the very idea of citizenship as a ‘permanent’ truth, in his on-going project Counter Enclave, which started in 2017.

The multimedia project, which has been initiated by the Britto Arts Trust, led by Rahman and Tayeba Begum Lipi, focuses on the lives of those people who were condemned to what was a virtually stateless existence for almost seven decades, following the hastily conducted exercise of marking the international border between India and the then East Pakistan, in 1947.

These were the 50,000 odd people of the ‘Chitmahal’, or enclaves – pockets of the territory of one nation located within the other nation – who suffered neglect from both sides. In 2015, as India and Bangladesh swapped the enclaves under the Land Boundary Agreement, about 35,000 people in the 111 Indian enclaves in Bangladesh became its citizens and the 14,000 odd people in 51 enclaves of Bangladesh, in India attained Indian citizenship. They were given the option of choosing their citizenship. 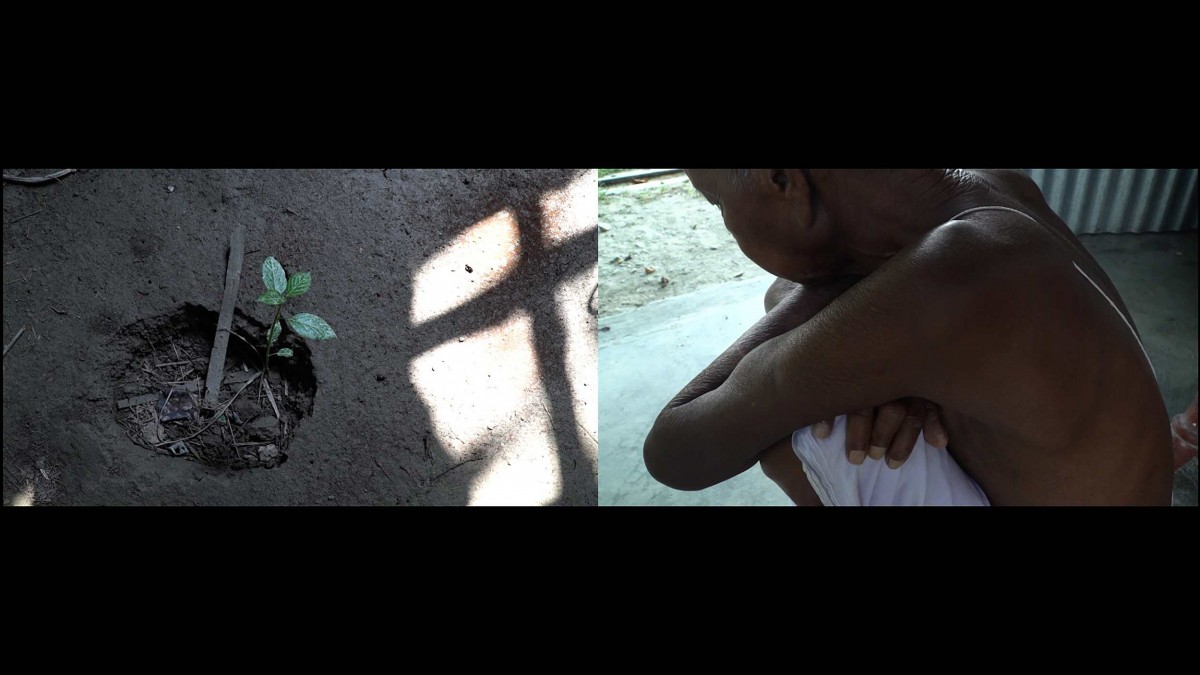 Counter Enclave seeks to capture the human tragedy of people buffeted by the currents of history thus. For the project, Rahman visited the largest Chitmahal at Dasiar Chhara, in Kurigram district (Bangladesh). He also visited several Chitmahals in India and the temporary settlement camps at Dinhata and Mekhli Ganj in Cooch Behar, district where those who chose to move to India, were staying.

For the dual-channel video (two videos running simultaneously on a single screen), Replacement Rahman chose to present the story of the brother who was separated from his sibling in 2015 of his own volition. The younger brother continues to live on their ancestral property in Dasiar Chhara (in Bangladesh) while the elder brother, who opted for Indian citizenship, has moved to the temporary settlement camp in Dinhata.

Also read: The Song That Encapsulates the ‘Afsana’ of 1947

The video shows the fragile figure of the elder brother who moved to India alongside the dilapidated state of his home in Dasiar Chhara, as if to say that he may have replaced his Bangladeshi address with an Indian one, but his memories of the home remain divided.

Rahman says, “I decided to juxtapose his ageing body with the abandoned house. Both the human body and the ancestral house seemed similar in terms of their delicate state.” 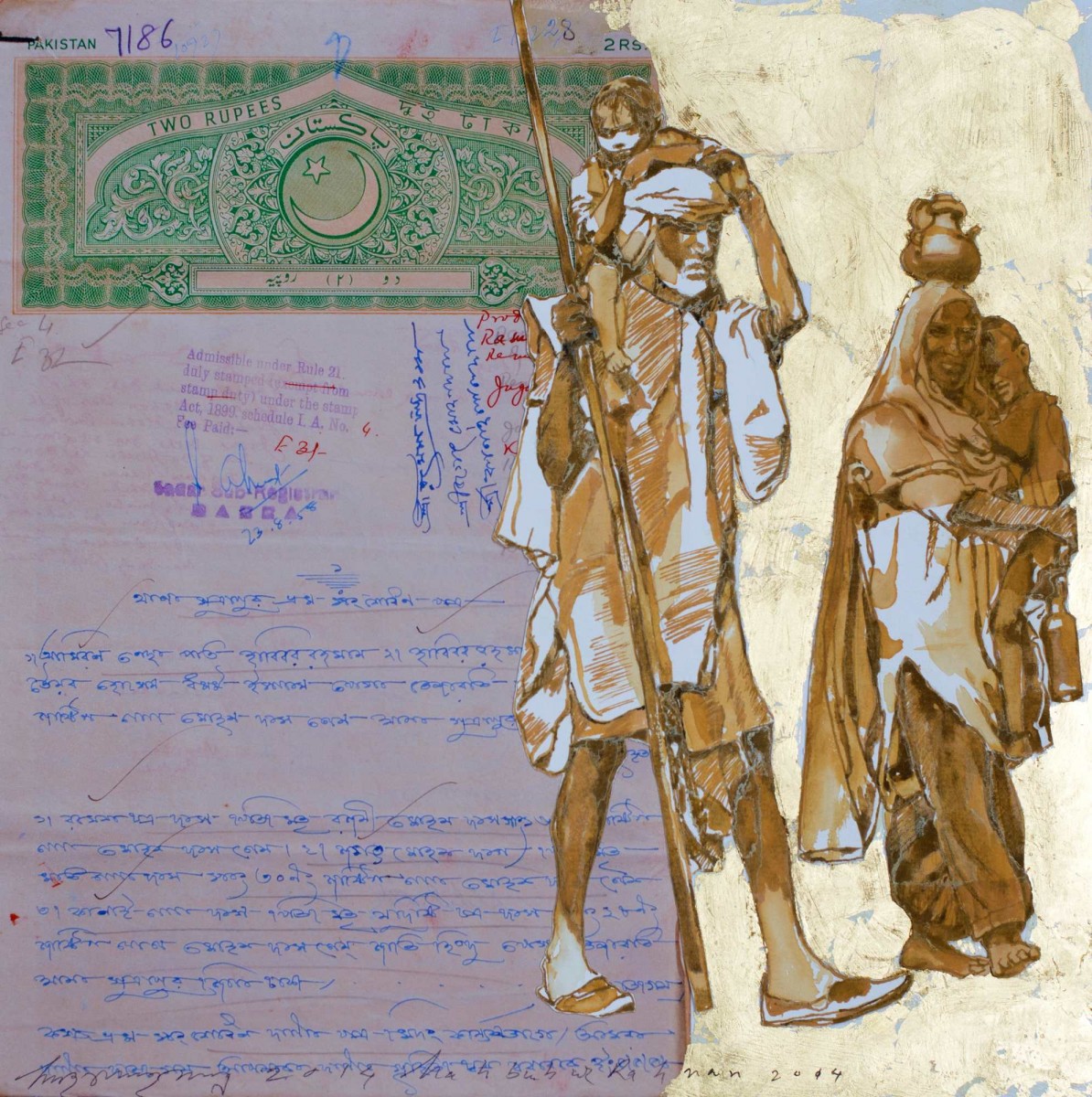 The artist’s series, Dislocation (2018), comprising ink drawings on stamp paper, is also in line with his artistic practice of being sensitive to the humanitarian crises triggered by political decisions that have engulfed the land he calls home, from the time of the influx of refugees post-1947 to the present-day distress wave of Rohingya from Myanmar to Bangladesh.

On stamp papers of land and other property sourced from his family archive – bearing colonial era, Pakistani and Bangladeshi revenue stamps – Rahman creates images of the mass migration of people rendered helpless due to forced displacement, and its impact on the socio-economic scenario and emotional well-being of society. As Rahman sees it, the idea of home is always in flux for large sections of humanity.

For Karachi-born and Berlin-based multimedia artist Bani Abidi (b. 1971), it was the trail of tastebuds, spoken language, and musical cadences and rhythms which enabled her to retrace her way home – a home that was physically divided in 1947 but can still be experienced in a seemingly abstract but vivid manner.

In her trilogy of short videos, Mangoes, News and Anthems (2000-2001), Abidi draws upon the similarities of food and music that connect the people of India and Pakistan. The artist, who also performs in the videos, says, “It is a trilogy I made 20 years ago. I was studying in Chicago at the time and from a distance, I understood that food, language, music, the particularity of certain smells and sounds, the real visceral stuff was what longing was made of.”

“And obviously,” Abidi recalls “the only people who relished and marked these instances of familiarity with me were my North Indian friends. We were talking hyper geographic locality, like when is the best time to eat mangoes and in what manner. Borders and religions are minor blips in this realm of collective gluttony!”

Also read: A People Ravaged: Peeling off the Many Layers of Partition Trauma

The experiences she narrates with a droll sense of humour reveal the significance of seemingly “little” things that actually make up the sights, sounds and smells of a shared culture in the most evocative manner – a shared culture that is held hostage to the exigencies of politics at home but can be experienced in all its vibrancy from a distance. 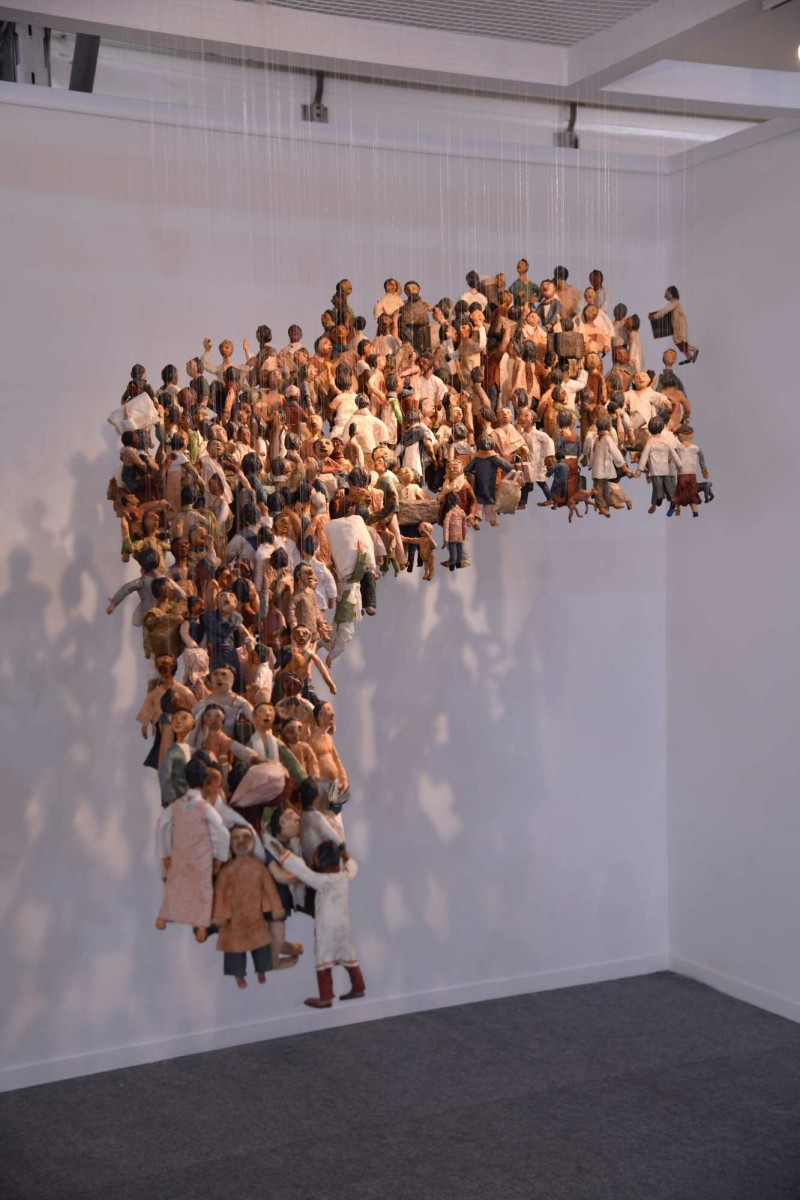 ‘Soaring to Nowhere’, from the show ‘The Exodus of Eternal Wanderers’ (2020) by Sudipta Das; mixed media with Hanji paper. Photo: Courtesy of Gallery Latitude 28

If Abidi focuses on the memory of home that she shares with people across the border, Baroda-based artist Sudipta Das, in   her recent installation, The Exodus of Eternal Wanderers (2020 Delhi), seeks to capture the distress migration triggered by the annual occurrence of floods in her hometown Silchar (the city is located on the banks of the Barak river, in Assam).

The installation – a mass of paper figurines symbolising the civilisational journey of the dispossessed – is striking. The small size of figurines is a reminder of ordinary lives that are up against overwhelming forces, man-made or natural.

Through the mass of figurines as well as the individual ones reflecting the personal – and universal – travails suffered by those who live in constant fear of displacement, Das captures the fragility of existence and the resilience of the human spirit. 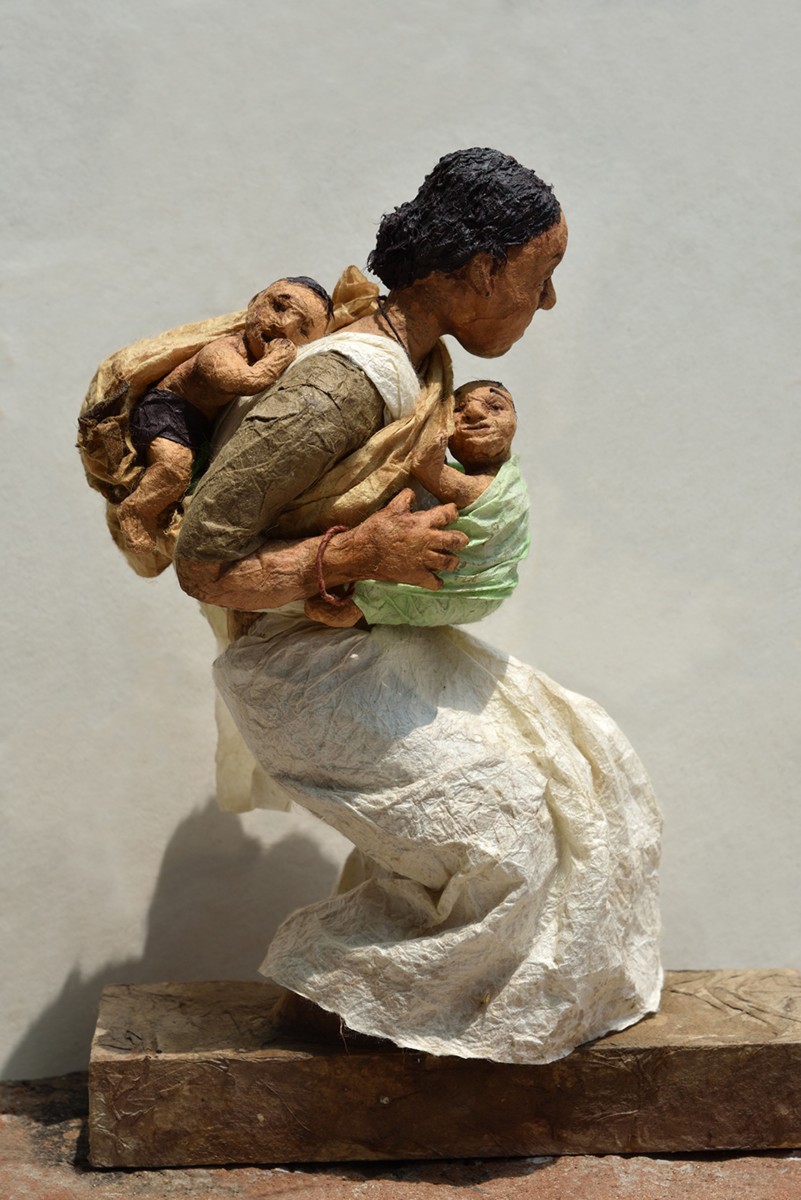 ‘Mother and Child’, from the show ‘The Exodus of Eternal Wanderers’ (2020) by Sudipta Das; Hanji paper, rice paper and watercolour. Photo: Courtesy of Gallery Latitude 28

The artist has used the Korean Dak-ji doll-making technique to create her figurines. She has used the quality of the paper itself – Han ji paper made of wood from the Dak tree – to underscore the fact that like the handmade paper, which is soft but not fragile, migrants who are pushed to the edge also display the resilience to confront their circumstances.

This theme is part of her personal history too – her ancestors migrated from the erstwhile East Bengal to Assam four generations ago.

Das says, “Through my work, I seek to draw attention to the uncertain state of human lives forced to be on the move. In my portrayals of displaced people living in temporary settlements, I am thinking of home as a ‘shelter’ than a physical space.”

In her “eternal wanderers”, one catches a glimpse of those hit hard by catastrophes of various kinds in the absence of people-sensitive policies in her state – be it the threat of flood, pandemic or the ramifications of the Citizenship Amendment Act (2019) and the National Register of Citizens.

On one side is the extraordinary minimalism with which Zarina, one of the most prominent artists of her generation, captured the essence of histories of displacement and migration in her ceaseless search for a home. On the other side are present-day artists like Mahbubur Rahman, Bani Abidi and Sudipta Das working in their own dynamic contexts.  The attempt to prise apart grand narratives and highlight the human predicament they give rise to, continues.

Dilpreet Bhullar is a writer and researcher based in Delhi.