The Making of Khwaabgaon: How an Idyllic Village in Bengal Became an Artist's Canvas

For residents of Khwaabgaon, located a few kilometres away from Jangalmahal town at Bengal's western end, art is life, and it even influences local politics. A painting in Khwaabgaon depicts a scene from a local community festival. Photo: Special arrangement.

This summer, it is hard to escape the political heat in Bengal. Tea stalls, street corners, trees, walls, everywhere you go, the election follows you. As one travels from one area to the next, flags, festoons, cartoon characters, among other forms of campaign paraphernalia that fill streets indicate the dominance of one party over the other.

This holds true for the Jhargram district as well. As one of the main centres of the Jangalmahal area on the western end of the state, which polled in the first phase of the ongoing Assembly election on March 27, the bustle of the polls is still quite alive here.

But just around four kilometres away from the town, a journey on a road of dry red soil through sal forests leads to a tiny village of around 80 people making you wonder if you are in a dream world, or as this place is called Khwaabgaon.

Cut off from the cacophony of densely populated areas, mud walls in Khwaabgaon present images of community festivals, COVID-19 awareness and even an imaginary city painted in bright colours. There are no political posters, flags, or symbols anywhere. This was painted in August 2020 in Khwaabgaon urging people to wear masks to keep COVID-19 at bay. Photo: Special arrangement.

But the absence of posters or a political tussle was not what Mrinal Mandal, a Kolkata-based painter and sculptor, who led the transformation of this village, had initially envisioned. Mandal first visited this village of the Lodha community, one of the most backward communities in the state, in 2014 when he had come back to his hometown, Jhargram.

“There is a dense forest on one side, and on the other, you can see a picturesque landscape that is no different from a European classic painting of the countryside. There was a tremendous positive vibe,” he recalls.

That is when he had decided that he wanted to do something here. Mandal had co-founded an organisation, Chalchitra Academy, with fellow artist Jayati Banerjee in 2012. So, as an initiative of the academy, they started teaching art and craft in the village from 2018 onwards.

It began with 20 students, but slowly more people joined in. In early 2019, they painted the first wall, and by October 2019, the village turned into a canvas for Mandal and the people of the village. Every autumn, after Kali puja, people in the village ceremonially put a fresh coat of mud on their walls. Now, they also start painting the walls in the season.

While Mandal is based in the village, other members of the academy keep coming down from time to time to teach and live there. Their efforts have helped a slow but definite realisation of the talents of the people in the village. Some of them have even started selling their craft on a regular basis. Like Shashthi Charan Ahir (42), a differently-abled farm labourer, now earns around Rs 4,000 a month by selling his craft. Most of his work is in the style of katumkutum in which figurines are made from wood, twigs roots and even coconut shells.

“This has given me a new life. It is not just about the money, I look forward to creating something new. Whenever I am in the forest now, I check things lying around that can be shaped into a figurine,” says Ahir.

The name Khwaabgaon was suggested by scholar and writer Shivaji Bandopadhyay. And it fits right in. Every member of this village is in some way involved with art now. They show people around, sell the creations, or at least practice and aspire to create something to sell. Children from nearby villages come here now to attend art classes and Mandal is often asked to expand this project there.

“The name suits the place very well because here people from a very deprived community have started to dream. Dreaming or imagining a better life and world is the very beginning of any kind of social change,” says Mandal. 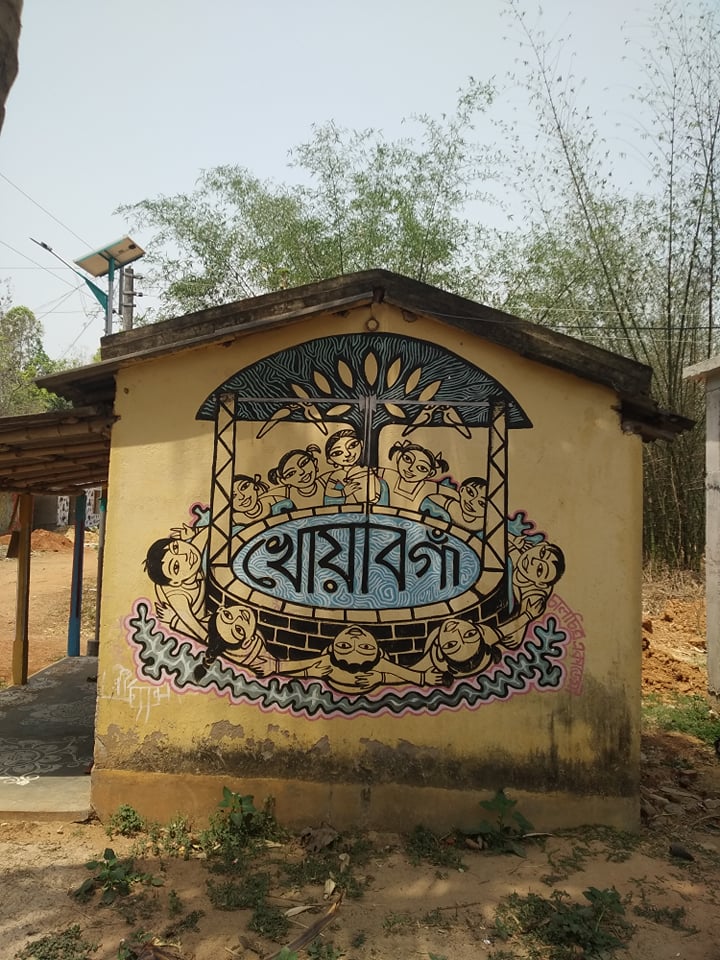 A painting on a mud wall in Khwaabgaon. Photo: Special arrangement.

The change in values has been so powerful that local politicians decided to respect the space too. What has also helped is that both the major contesting parties, Trinamool Congress and the Bharatiya Janata Party (BJP), have artists in senior positions locally. Trinamool leader Debjit Manna and BJP’s Sukhamay Satpathy, both artists, have been effusive in praise of the effort.

Manna, who has also been partially involved with the village, says, “No one wants to disrupt something so beautiful. In fact, if we can contribute in some way, it speaks well for our politics.”

While the popularity of the village has meant tourist footfall and buyers for crafts of the village, Mandal is apprehensive about too many visitors affecting the idyllic life. “That is why we have not put up any signs on the route. It makes it tough for people to visit but that is the only way we can protect the rhythm of life here,” says Mandal.

But he doesn’t want it to be a closed place either. In fact, he is planning new ways of creative exchange between the people in the village and artists.

“We have already had multiple exhibitions. We are planning residency-like arrangements where writers, artists and creative people can stay in the village for a period and create something. Moreover, the children here feel very encouraged when talented outsiders stay with them,” he says.

Dipanjan Sinha is an independent journalist based in Kolkata.