The artist continues to be exhibited worldwide even as financial statements submitted to the Delhi high court paint an incomplete picture. 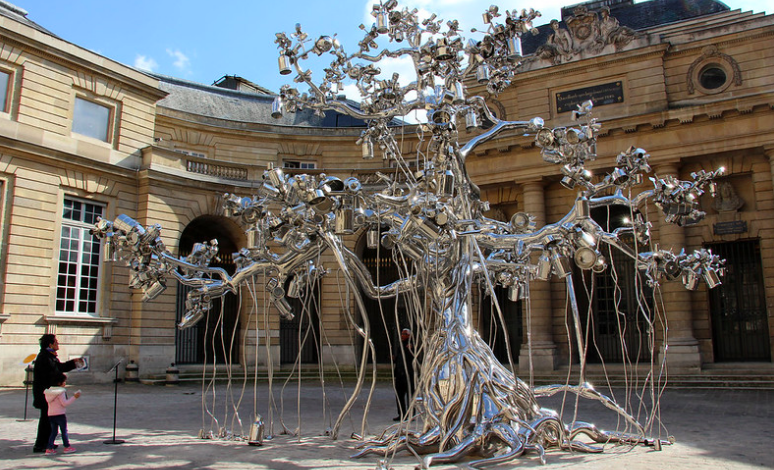 Subodh Gupta's 'Bodhi Tree' installation in Paris. The same work of art is currently displayed at the NGMA in New Delhi. Photo: Fred Romero/Flickr (CC BY 2.0)

New Delhi: Earlier this month, artist Subodh Gupta was in Poitiers, France for the opening of an art exhibition. His installation was a house made entirely of stainless steel pots and pans – the kind that are fixtures in any Indian kitchen.

Standing inside the installation, Gupta donned an apron, rolled up his sleeves and stood before a counter stacked with ingredients to address an audience about his interest in cooking: “I’m taking a glimpse of it. And making my own pleasure out of it. Since I love cooking…”

Gupta is participating in a show called ‘Traversées/Kimsooja: Cooking the world’, which is being headlined by famous South Korean artist Kimsooja. Gupta is one of 20 international artists taking part – a sign of his continuing appeal and demand in the international cultural circuit.

Just a few weeks ago, however, Gupta had told the Delhi high court in a defamation case he has filed against unknown persons that “all art galleries that once covered and sold” his work have “actively distanced themselves” from him.

He had informed the court that this was “severely impacting the sale of his art works and thus distressing his source of livelihood.” He also said that he and his family were facing “immense social and professional embarrassment” because of the allegations of sexual harassment that were posted about him on the ‘Scene and Herd’ Instagram account last December.

While the #MeToo movement in India saw dozens of women in the media and art world come forward with accounts of sexual harassment, the allegations against Gupta have all been anonymous.

The high court has ordered Instagram and Google to take down the anonymous posts and reveal the identity of the person/s who posted the allegations against Gupta. Google says it cannot comply with this request and has filed for a review.

Since Indian law grants individuals the right to file a defamation case, some plaintiffs seek token damages in the expectation that a court ruling in their favour will undo whatever loss of reputation they feel they have experienced.

Thus, when plaintiffs claim a large sum in damages, the expectation is that they are able to back up this figure with a precise detailing of the actual losses incurred.

While the burden of the artist’s claim for Rs 5 crore in damages is the “incalculable loss” he says he has suffered, his professional and personal engagements since last December suggest there has been little let-up on the career front despite the charges levelled against him.

Gupta continues to enjoy the support of the three major galleries that have handled his work in the past. Internationally, his work is housed and sold via Galleria Continua and Hauser and Wirth. In India, his work is sold via the Nature Morte gallery in New Delhi. None of these places have publicly or actively distanced themselves from him, or discontinued exhibiting or selling his work. In fact, Galleria Continua is associated with Gupta’s recent gig in France.

Artists don’t often make money from auctions as they are usually secondary sales, but auctions are an indication of the artist’s continuing worth and demand in the market. In June, Gupta was invited to a gala fundraiser hosted by the UK royal family’s Prince Charles and Duchess Camilla. He had made a giant brass elephant which was one of the centrepieces of the ‘Animal Ball 2019’. The sculpture sold for Rs 1.28 crore. “When the gavel hit the table she raised a whopping $180,000,” says a social media post about the sale of his sculpture at the event, which was meant to raise awareness and money for animal conservation efforts worldwide.

In total, Gupta’s work has been auctioned for a total of Rs 3.831 crore in the last ten months, since his name cropped up in sexual harassment allegations. 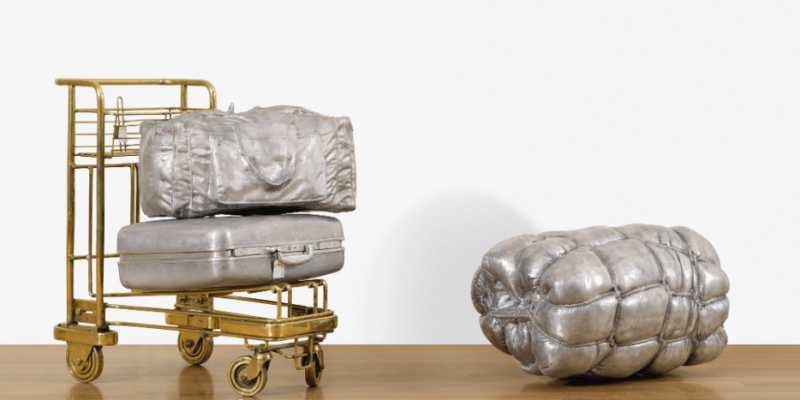 Gupta’s bronze installation sold at Sotheby’s for Rs 96 lakh in New York in May 2019. Photo: www.sothebys.com

This September, Ashvita, a new gallery in Chennai, opened an exhibition which included the works of Subodh Gupta as well as four leading contemporaries such as Bharti Kher, Thukral and Tagra, L.N. Tallur and Jitish Kallat. Also, in September, Palette Art Gallery in Mumbai celebrated its 20 year anniversary and opened an exhibition with 23 major contemporary Indian artists, including Gupta.

The opaqueness of an artist’s financial statement

There are many problems with reading this summary of his finances to make any assessment of whether his livelihood has really taken a hit.

An artist earns via private sales, gallery sales and sometimes via auctions. They are often commissioned to do works such as paintings, sculptures and installations.

“Artists are not salaried employees getting fixed amounts into their banks every month. Rather they get paid as and when a work sells, and often that is also split into smaller installments. They often take advances for commissioned work, which can be completed over a long period of time. Plainly looking at a balance sheet won’t explain much about how an artist actually earns, year on year,” says Priyanshi Saxena, an art advisor based in Delhi.

But if his claim is that he has done badly due to the allegations, then that means his loss of over 50% in net profits happened in just the last three months of the financial year. Whereas it can also be possible that he just had a poor year in FY 2019 all along. So looking at the financial statements of the two years doesn’t quite help understand if this kind of up and down may actually be routine for him and artists like him or the product of reputation loss, as his defamation case implies.

Apart from this, it is also possible that Gupta has non-liquid assets such as property or other art works. Artists themselves also barter works of art between each other without necessarily exchanging them for money. Gupta may also have other bank accounts besides his primary one.

None of this is reflected in his summarised financial statement.

“Modern artists typically sell at higher and more stable prices than contemporary and living artists. Many modern artists have passed away or no longer produce work, so their work is in limited supply. But contemporary artists like Subodh typically have a few decades of work ahead of them. If their demand gets weak, it could be for a range of reasons: the price point could be too high, surplus of their work on the secondary market, they have stopped producing or innovating, shifting whims of the art world audience or at a more macro level a slow down in the economy,” says one collector and an art market expert based in Delhi.

The Wire has reached out to Subodh Gupta and his lawyers with detailed queries about his claims of loss in the Delhi high court versus his continued stature in the global art world and market.

In fact, many in the art world feel that the allegations against Gupta will do little to dent his public image and professional worth: “Remember the painter Chintan Upadhyay? He has been in jail over the murder of his wife and her lawyer. But he is selling his paintings from jail,” says one gallerist in India. Mumbai Mirror reported in 2017 that filmmaker Kiran Rao bought one of his paintings for Rs 4.5 lakh while he was in jail.

“If sexual misconduct was a reason to reject an artist, then European museums would have to remove Picasso from their walls,” said the same gallerist. Picasso’s sexual and physical abuse of women has simply not become as well-known as his paintings.

“The more controversial an artist is, the more likely his work is going to be seen as even more coveted and valuable,” he said.

In the art world, the lines between one’s social and personal life and professional life are blurry. Parties and public events may be fun, but they are also work. Gupta told the Delhi high court that his personal life and social life have also taken a hit following the sexual harassment allegations made against him. But a brief dip into published information shows that many of India’s biggest names in the world of art and culture continue to socially engage with Gupta.

In August, Gupta attended a party thrown by Indian art collector Kiran Nadar. The party was hosted for British architect David Adjaye, who will be designing a new museum space for the Nadars. Bose Krishnamachari from the Kochi Biennale Foundation posted a photo on social media of himself, Subodh Gupta, Jitish Kallat and G.R. Irrana standing together smiling. Incidentally, Irrana has signed a petition condemning Gupta’s defamation suit.

Also in August, Gupta was an invitee for a farewell party for the French ambassador to India at the French embassy in Delhi.

In May 2019, Mumbai Mirror reported that Gupta attended a party hosted by famous fashion designer Tarun Tahiliani at his farmhouse. The newspaper published a photo of one of the guests hugging Gupta.

In 2014, the BBC wrote about Subodh Gupta and described him as having a “stainless shine”. It is this image that Gupta will continue to defend in the Delhi high court, with the next hearing in his defamation case scheduled for November 18.

Note: This piece was updated on October 22 with information about the ‘Animal Ball 2019’.