As Gujral passes into history, and we look retrospectively upon his life’s work in all its diversity, we will realise that he inhabited multiple frames of reference. 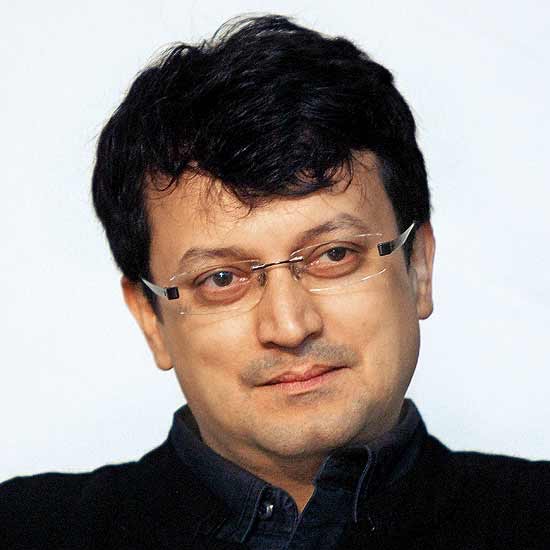 Borders, arbitrarily drawn and brutally enforced, could have constrained Satish Gujral. But he refused to allow such oppressive constructs to define his choices, whether in life or art.

Born in 1925 in Jhelum, pre-Partition West Punjab (now in Pakistan), he enrolled at the Mayo School of Art, Lahore, at the age of 14. In 1944, he moved to Bombay, where he spent the next two years at the Sir Jamsetjee Jejeebhoy School of Art. Among his fellow students and associates there were the young men who would form the Progressive Artists’ Group and people the Bhulabhai Institute, those hubs of artistic ferment in newly independent India: F.N. Souza, S.H. Raza, M.F. Husain, K.H. Ara, Akbar Padamsee, Tyeb Mehta and V.S. Gaitonde.

In 1947, Partition unleashed a genocidal bloodbath across the subcontinent, forcing millions of people from their homes and thrusting them into an uncertain future. Gujral’s family were among these refugees, leaving Lahore for Delhi, where they crafted new lives for themselves in the nascent Republic of India.

They never forgot their homeland, though. The artist’s brother, Inder Kumar Gujral, who eventually became India’s foreign minister and later its prime minister, would enunciate the ‘Gujral Doctrine’, an updated Panch-sheel intended to guide India towards more fruitful and collegial relations with its neighbouring countries, especially Pakistan.

In the early 1950s, already, Satish Gujral’s own convictions were internationalist. In 1952, aged 27, he set out for Mexico City on a scholarship to the Palacio Nationale de Belles Artes. This was a highly unusual choice for an artist of his generation. Most of his peers – whether they belonged to the Calcutta Group, the Bombay Progressives or the Delhi Silpi Chakra – were heading for Paris, London or New York, metropolitan centres that were, to their dazzled eyes, beacons of international modern art.

Also read: A New Chapter in the Story of Husain’s ‘Indrani’

Among these peers – apart from his Bombay colleagues, Raza, Souza, Padamsee – were also Paritosh Sen, Nirode Mazumdar and Ram Kumar. They were the first generation of postcolonial Indian artists, finding their feet in a country ripped apart by the Partition yet optimistic in a new-found Independence. Their allegiance to modernism and their desire to belong in a larger world prompted them to leave the home country, to situate themselves in the context of an international art world.

Many of them returned; some would stay away for decades; a few would evolve a life of transcultural, transcontinental choices. While these artists embarked on their P & O liners, heading for Marseille or London, some observers may well have wondered what had prompted Gujral to go from one periphery to another. Such scepticism was misplaced. The vigorously formative ethos of Mexican art would inspire and sustain Gujral, endow him with a raw courage and boldness in choice of form and material, turn him into an extraordinary and distinctive torchbearer of postcolonial Indian art.

When I first met Gujral in the early 1990s, he had not yet undergone the cochlear implant that would restore the hearing he had lost at the age of eight, following a spell of illness. With the resolute support of his wife Kiran, and his own irrepressible zest for life, the artist had not let his deafness constrain him in any way. Even as a teenager, he read widely, imbibing the treasures of literature. Urdu poetry was a lifelong passion with him; he returned, often, to the writings of Ghalib, Iqbal and Faiz. He took part animatedly in conversations; he spoke in a remarkable, hoarse, rumbling voice that seemed to emerge from deep within a cave.

How, I recall asking myself in wonderment and admiration, had Gujral set out to cross the oceans as a young man whose English was perfunctory, Spanish non-existent, and who was hearing-impaired and lacking in funds. World War II had come to an end during Gujral’s Bombay years. The freedom movement peaked in the INA Trial and the naval ratings’ mutiny, which shook the grip of Empire. When independence dawned, it had not been, as the immortal Faiz put it, “the dawn for which we had waited”. 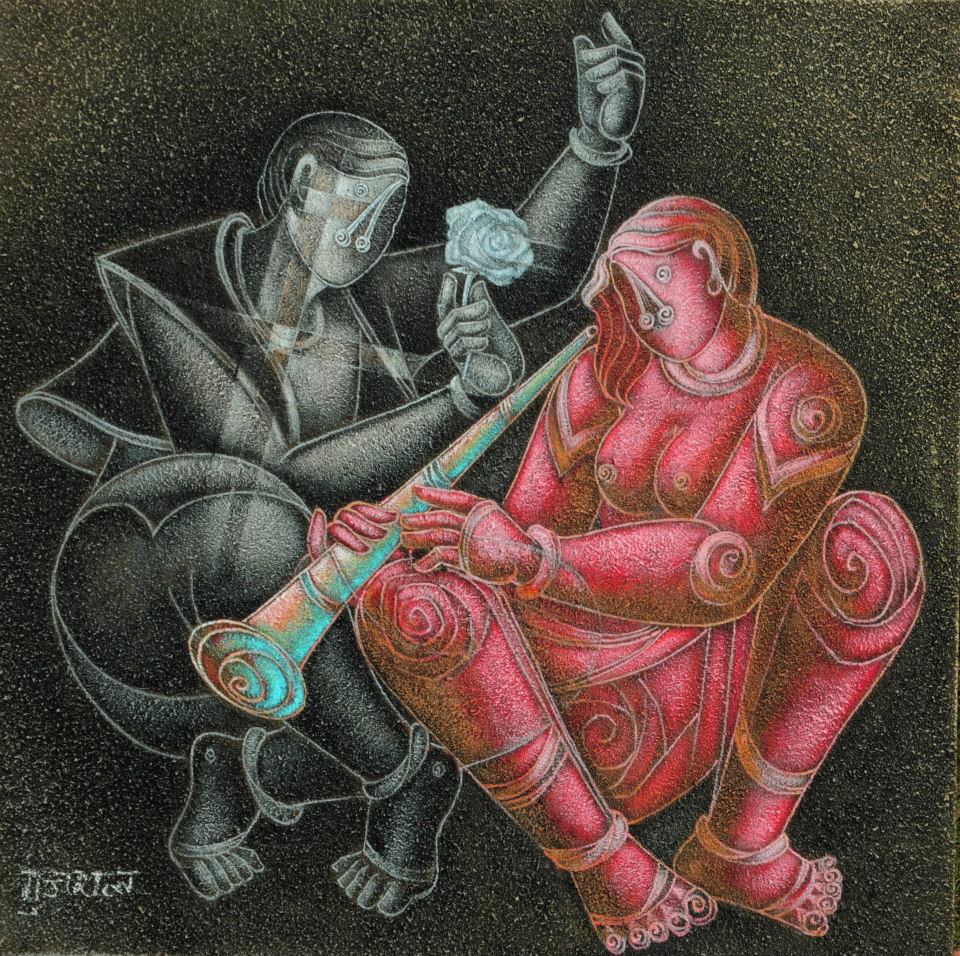 Gained at the cost of Partition, independence plunged the subcontinent into barbarous violence, which Gujral witnessed at first hand in a Lahore that was suddenly alien territory. The world of his childhood and early youth vanished in the bestiality of pillage, rape and massacre.

The memories of anguish, loss and rage seethed in Gujral’s consciousness through the late 1940s and early 1950s. He found himself unable to subscribe to the fascination that his confreres felt for the gallery-tamed house styles of European modernism: post-Impressionism, Expressionism and Cubism. He was seized by a driving need for space and scale, and an expressionist grandeur of gesture, to articulate the horrors that he had experienced during the Partition.

What he needed was the psychologically liberating and physically demanding discipline of the mural. The greatest muralists in the world, at that time, lived and worked in Mexico: the triad of Diego Rivera, David Alfaro Siqueiros and José Clemente Orozco. So to Mexico he sailed, arriving in a country whose main point of contact with India until then had been the remarkable Bengali revolutionary M.N. Roy, who had crossed over from California into Mexico and established that country’s Communist Party in 1917.

In Mexico City, Gujral was apprenticed to Sequeiros, worked with Diego Rivera, and got to know Frida Kahlo during the last years of her life. During this vital formative period, Gujral became influenced by the ideals of the Revolution. He developed an idiom of heroic monumentalism, a robust pictorial language deeply Goya-like in its combination of bitterness and suffering with optimism and resilience.

Also read: Akbar Padamsee Was Generous – and Unsparing – in His Advice to Aspiring Artists

Gujral’s experience in Mexico was much like Gandhi’s in South Africa. Away from the homeland, each discovered how best to approach his dilemmas and confusions. During his two-year stay in Mexico, Gujral learned to charge his images with gestural forcefulness while remaining on speaking terms with his public. If his art was passionately expressionist in its private content, it was also shrewdly expressive in its ability to share itself with others.

Above all, I believe, Gujral developed a true understanding of the postcolonial condition while in Mexico, a country constantly either the subject or victim of the Spanish and the US Empires. Here, perhaps, he internalised the lonely dignity and self-assurance of the marginal, which never left him.

After all, although Europe takes credit for producing the artistic languages of modernism, it was not in mainland Europe, but in colonial Hispanophone literary culture at the trans-Atlantic periphery – in the writings of the Nicaraguan poet Ruben Dario – that the conception of el modernismo had first been floated.

To describe Gujral as a painter is to diminish the versatility and range of his artistic production. He was a painter and sculptor, a creator of large-scale murals yet also of graphics and collage works. His approach to his media and materials was always experimental: he worked in paper collage and mosaic, burnt wood and metal, graphics, ceramics, and stone. He was an accomplished and path-breaking architect. He also wrote an autobiography, A Brush with Life (1997).

Going through the records of his exhibitions, we find that Gujral traversed the planet with his exhibitions, embodying the Nehruvian spirit of non-alignment and global comity. In 1961, we find him showing in Cairo, Mexico City, Rome, Frankfurt, Paris, London, Montreal, Hawaii and Tokyo, in 1961. Again, in 1966-1968, we note that he showed his ‘Paper Collages’ in New Delhi and Bombay, New York and Helsinki, Stockholm and Madrid. They were then shown in a travelling exhibition in the USSR, Mexico, Peru, Argentina and Brazil. A sculpture by Satish Gujral.

Far too many of us, having been trained to believe that globalisation began in 1990, forget how widely some of our artists travelled in the benighted 1950s and 1960s, adroitly bridging NATO and Warsaw Pact countries, deploying alternative political networks, activating connections in the global revolution, or learning skilfully to play on both sides of the cultural skirmishing of the Cold War.

As Gujral passes into history, and we look retrospectively upon his life’s work in all its diversity, we will realise that he inhabited multiple frames of reference. We could see him as a key contributor to the emancipation of Indian art from a style – and medium – specific textbook modernism.

As a sculptor, he opened up the iconic, singular object to heterodox materials and demotic treatments. Given his play of techniques, his efforts at bridging the beaux-arts and the artisanal, the traditional and the industrial, Gujral’s projects must be set alongside those of the Santiniketan and Baroda master, K.G. Subramanyan.

Gujral must also be regarded as a productive interrogator of the transcendentalism of his own generation, with his predilection for mixing and matching objects across the territorial boundaries of the made, the readymade, the found and the lost.

Also read: The Man Who Captured Shades of Bapu’s Dream

And Gujral should certainly be located firmly in the narrative of postcolonial Indian architecture, which he entered at a flamboyant angle. Among the buildings and complexes he designed are the Belgian Embassy and the Islamic Cultural Centre in New Delhi, the Al Moughtara Palace in Riyadh, the Goa University complex, the CMC Complex in Hyderabad, and the Indian Embassy in Kathmandu.

Speaking to the architect, writer and artist Gautam Bhatia, he said, “To me, an architectural proposal comes like a theme to an artist. It conjures up multiple images in sculptural forms.” And further in their conversations: “Space to me is a live organism that has to be integrated emotionally and creatively; it is the determining force rather than something subordinate to the building requirements.”

When we write art history, we are tempted to constellate our thoughts around collective developments, around groups, movements, and generations. This leads us, sometimes, to neglect the quixotic adventurers, the splendidly eccentric questers and border-crossing visionaries who elude classification. Satish Gujral was one such. In attending to his artistic trajectory, we would greatly enrich our sense of India’s art history as well as its cultural history.