'You Can't Forget Your Soil': Why Punjabi Artists Are So Embedded in the Farmers' Protest

Both on the ground and on social media, singers, actors and others have been amplifying farmers' voices against the new laws. 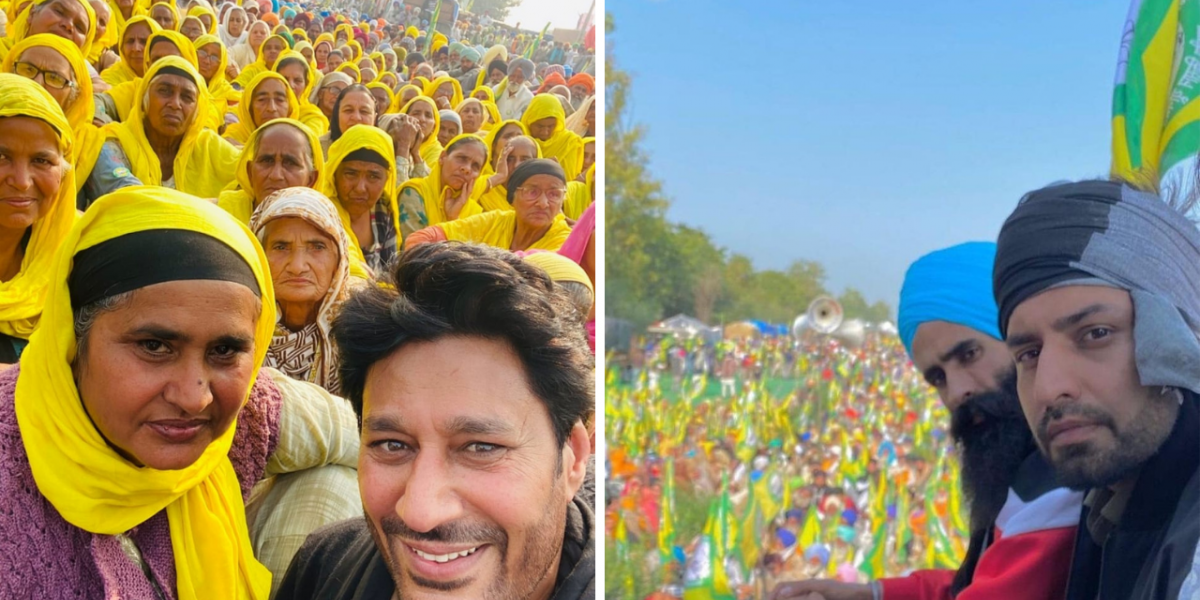 Mohali: The nationwide farmers’ agitation, which started on November 26, is in its eighth day today. In Punjab, however, the movement has been going on for the past three months and gathered support from all sections of the society.

Since September, when the agitation first intensified within Punjab, Punjabi film actors, singers, NRI stars and comedians, among other cultural figures from the state, have been vocal in supporting the farmers’ struggle.

Punjab is predominantly an agrarian society. Almost all artists, big or small, come from farming backgrounds. Those who don’t directly belong to the families of farmers have grown-up in the ‘Khet, Kheti, Pind’  (farm, farming, village) set-up of rural Punjab.

Diljit Dosanjh, the extremely popular artist from Punjab, who has been in solidarity with the agitating farmers for the last three months, belongs to the Dosanjh Kalan pind (village) near Jalandhar. Although his parents were not farmers, he started his career as a singer by singing kirtan (Sikh prayer songs) in local gurdwaras – one of the many factors leading to his closeness with Punjab’s community. Over the years, Dosanjh has become one of the very few turbaned punjabi artists to get work in Bollywood. He is also among the few to perform alongside established stars like Kareena Kapoor and Alia Bhat.

His strong stand on the farmers’ issue, reflected in his Twitter spat with actress Kangana Ranaut, has made the Punjabi artists community’s support for the movement a national news item.

Arguably, Dosanjh would not have engaged in a war of words with the actress if it had not been about her alleged attempts to defame an elderly protestor from Punjab.

On November 27, as soon as farmers from Punjab and Haryana set up their camps at the borders of the capital, a photo of an elderly protestor from Punjab went viral. The photo was captured long ago, when the woman was seen protesting in Punjab in the early days of the  agitation. But on November 27, fake news in relation to the photograph made rounds on the internet. The post claimed that the elderly lady is actually not from Punjab but is Bilkis Bano – the ‘dadi’ from the anti-Citizenship (Amendment) Act protests who was featured in the Time magazine. It claimed that Bilkis Bano was taking a fee of Rs 100 to attend the farmers’ protest after she attended the anti-CAA protests last year for money.

AltNews later busted this fake news. And after it did, the Punjabi regional media found the woman in question. In an interview to BBC Punjabi, 82-year-old Mahinder Kaur can be heard saying that she doesn’t know who Kangana Ranaut is. Kaur also tells the news channel she is a farmer and did not attend any anti-CAA protest last year.

On December 2, Dosanjh shared a clip of this video, tagged actress Ranaut and demanded an apology.

Dosanjh, in his tweet to Ranaut, made it clear that his motive to engage with the actress was to get her to apologise to the ‘mothers of Punjab.’ Dosanjh tweeted , “kam Jithey Marzi Kariey PUNJAB PHELAN, Ain Kive Bol Jao Koi Sadian Maavan Nu (Wherever we work, Punjab will always be our first priority. How can someone get away with bad mouthing our mothers).”

His pro-Punjab stand and the way he chose to engage with Ranaut – in vernacular Punjabi – has shown that he is not only close to his community but also proud of his identity.

Rooted in the farms 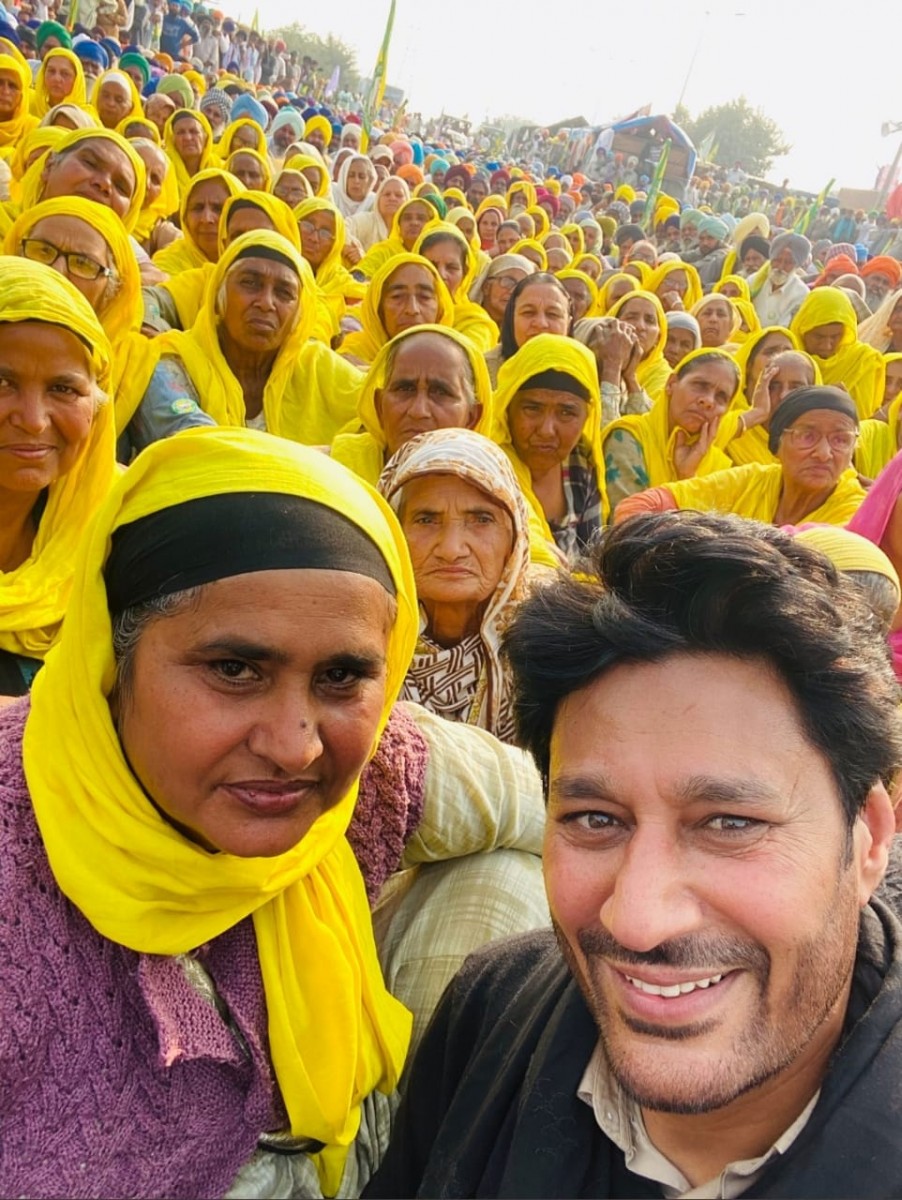 Some other well-known artists like Gurdas Mann, Harbhajan Mann and Siddu Moosewala have also been consistent in their stand against the farm laws passed by the Narendra Modi government in a rushed manner.

While some of these artists have shown solidarity via the internet, some have managed to be a part of the swell at the borders of New Delhi.

Kanwar Grewal, a singer in his 30s, has been a professional singer for the last seven years. Recently, he released a song called Ailan. The song is exclusively about the farm agitation with a punchline which says – Faslaan De Faisaley Kisaan Karuga, or all decisions on farming will be taken by farmers. The song has received 1.6 million views on YouTube since October this year.

Grewal comes from a family of farmers. On November 26, he marched along with lakhs of others to New Delhi. Speaking to The Wire, Grewal said, “Wherever  Punjabis are settled in the world, they will always be connected to their roots, their land and their community.”

He believes that the fame most Punjabi artists enjoy today is a result of generational hard work put into the fields by their families.

According to Grewal, singers singing for the national audience, or those who have worked in Bollywood, started their careers in Punjab. “These artists you are talking about first slogged hard in the region and then earned national or international fame. So they will not, and cannot, ever forget Punjab,” he said.

In the first 20 years of his life, till he graduated, Grewal accompanied his elders to the khet (farm) every day, he said.

“I would take my father’s lunch to the fields sometimes, sometimes even the evening tea was sipped on the farm. So this is who we are. Nobody asked us to join the protest, we joined because we are sons of farmers.”

Bir Singh, another young singer, famous for his soulful song Tu Te Main, composed a song exclusively on the agitation early in October – Mitti De Putro. Bir Singh told The Wire that he too, like everybody else, was brought up in an agrarian society. 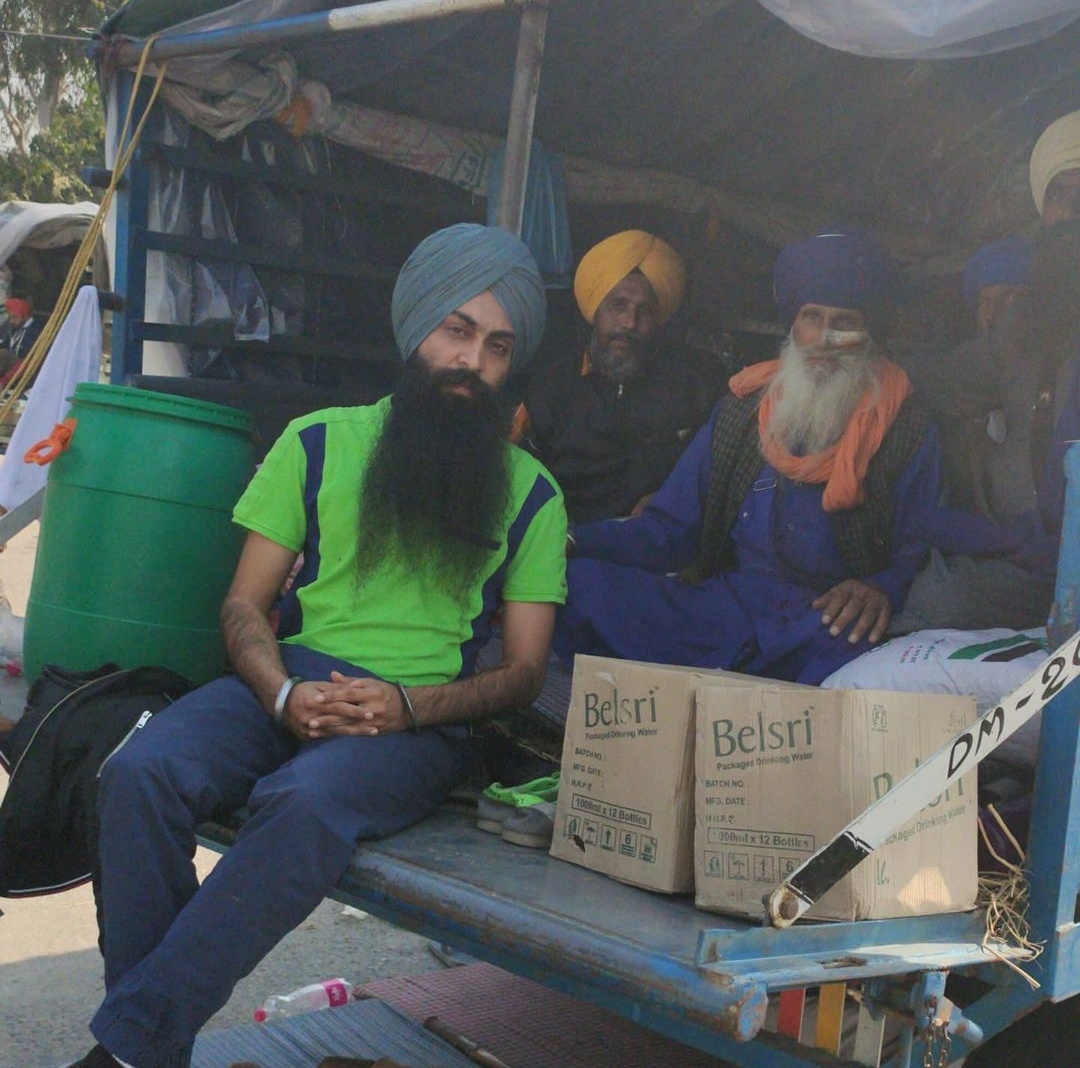 Bir Singh with 70-year-old man who was hurt on the face by a tear gas shell on his way to Delhi. Photo: birsinghmusic/Instagram

“Poore Punjab vich mukh kirrt hai kisaani (The main occupation in Punjab is agriculture),” Bir Singh said in his silvery voice, “and if agriculture faces a setback then the entire economy, including singers, will face a setback too.”

Like Bir Singh and Kanwar Grewal, Harf Cheema has also sung in relation to the farm agitation.

“Till last year, till my father saab was alive, he did farming. Now I’m busy with singing so I did not continue. Everyone else in my extended family is a farmer,” Cheema told The Wire.

Filmmaker Jatinder Mauhar, who has worked in Mumbai and in Punjab, said that considering this movement has become so huge, many artists of the region cannot afford to stay away from it.

“These artists are public figures, they thrive in the Punjabi society. The Punjabis are their audience, and so they cannot afford to not speak up about Punjab,” he said, “If they don’t speak up, then they will run the risk of isolating themselves from the people who they cater to.”

Within the cultural landscape of Punjab, there are broadly two kinds of artists – the people’s artist and pop singers. In this movement, whatever differences the two spheres may have internally have been put aside.

Many progressive writers and artists of Punjab, who draw largely from the history of the Left movement, have objected to pop songs born out of Punjab. This is because many songs and their imagery depicts Punjab and the Punjabi culture in certain ways which, according to most artists of Punjab, is either stereotypical or untrue.

But Nikki Nik, a singer at the People’s Artist Forum, who has been performing among agitators since the inception of the movement, says that this is not the time to question the intentions of artists.

“People;s artists are always involved in all progressive movements. They are the ones taking the lead. But this time, people from the industry have also come out in support. I think we should welcome them,” she said. 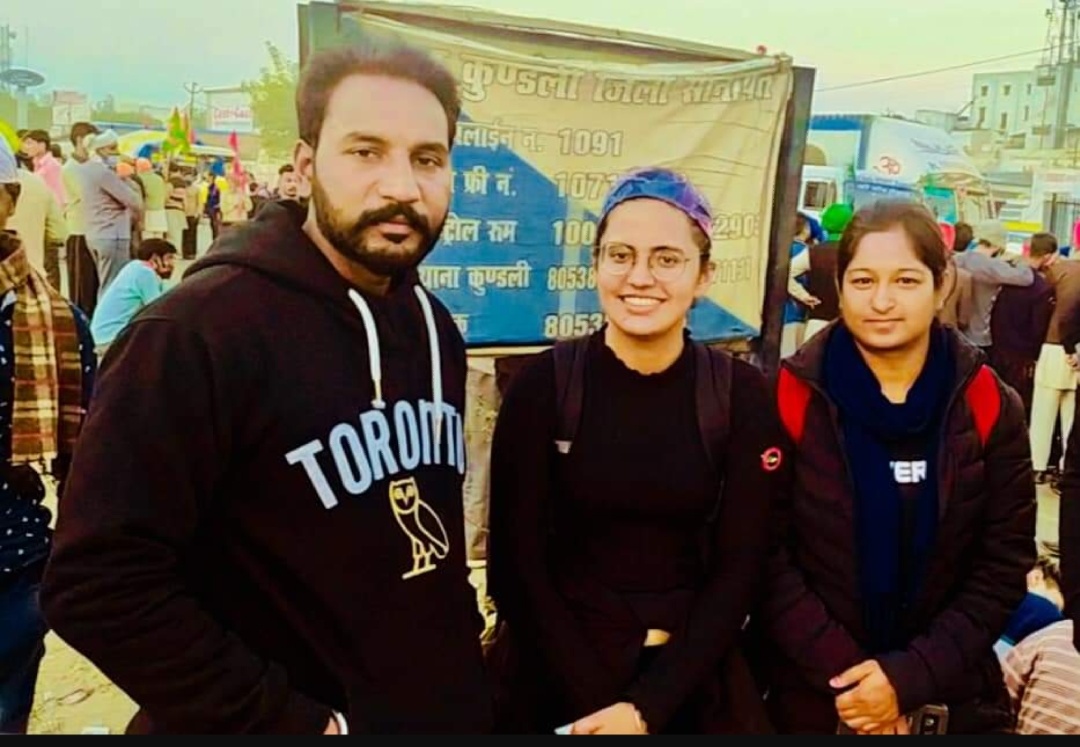 Nikki added that at this time, the artists who don’t speak up will find it difficult to explain their silence to their predominantly agrarian audience.

“Usually,  there is daaru (alcohol) this, daaru that and songs about women and all that, which become popular. But at this time, whoever is lending their support to the movement, in whichever way, is needed,” she said.

Punjab has a rich religious, political and social history. Both Nikki and Grewal said that Punjab’s history inspires many artists today. They said that those who are speaking out today and are composing songs in favour of the movement know that they will be written about in history too.

On the other hand, Grewal said that the religious history of the Sikhs inspires him. “Baba Deep Singh, Baba Banda Bahadaur, saaddey yodhey saanu ladn da josh dinde ae (The history of our warriors give us the strength to fight),” he said.

Grewal added that in the last decade or so, the popular music originating out of Punjab has become mediocre. But he believes this movement may be successful in changing that.

“You see, in the last 3-4 months, 90% music that has been produced from Punjab has been exclusively on the farmers’ agitation,” he said. According to him, this gives hope.

Apart from performances at protest sites, and production of a new kind of music, the Twitter episode involving Dosanjh and Ranaut has been successful in laying bare the diversions that fake news was propelling into the movement.

To counter the same, many artists are also tweeting their support by using a particular hashtag that’s become extremely popular in the last one week – #Tractor2Twitter. By using this hashtag, many artists with millions of followers are, in effect, trying to counter fake news on the movement.

Bhavjit Singh (38), who runs the #Tractor2Twitter account, told The Wire that the two main reasons why he, along with his friends, started this account on November 27 was to not let the government-run IT cell malign the movement and to fact-check news organisations who may be telecasting fake news.

“We don’t trust TV channels anymore. These godi media channels are trying to malign the movement and that’s why we have taken the power of  media dissemination in our  hands,” Bhavjit said.

Bhavjit added that a door-to-door campaign is being run by him and his friends in Punjab. He explained that they are asking people in rural Punjab to get on twitter and help trend their hashtag in order to compete with the government-run IT cell.

Along with this, Bhavjit said that artists like Jazzy B, Ranjit Bawa, Ammy Virk and even Diljit Dosanjh have tweeted using this hashtag, which is helping them reach millions of people on the internet.

“You won’t believe, within a few days, with the help of artists and people of Punjab we were organically able to trend our hashtag and defeat the government-sponsored IT cell,” Bhavjit said.

Parallel to the negotiations happening inside closed doors, the farm movement is thriving both on the ground as well as on social media.