Political Art in China 30 Years After the Tiananmen Square Protests

Contemporary Chinese art dates its beginnings back to 1978 – the year of reform and change. But how free are artists in their expression in China today? Rubber duckies replace tanks: this altered photo of the iconic "tank man" from the 1989 Tiananmen Square protests made the rounds on the Chinese social media platform Weibo in 2013.

On June 4, peaceful student protests in Beijing were crushed by tanks. The public memory of the Tiananmen massacre is still a taboo subject in China 30 years later.

Artists played an important part in the movement; just think of the statue of the goddess of democracy. After the violent suppression of the nationwide democracy movement in China, art was the first form of expression that sought a new visual language to reflect on social developments in the country.

Deutsche Welle: Is there any such thing as critical or dissident art left in China – a country that with its firm grip and control over its population has become increasingly totalitarian in recent years?

Andreas Schmid: There certainly is art that deals with the problems and challenges of society. That’s actually been the case for 40 years, since 1978. Since then, many artists in China have always had a certain undertone in their work that deals with the country’s social issues, even though the images may not always seem that way at first glance. 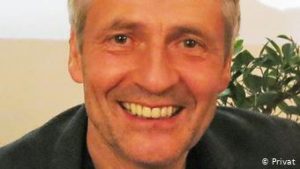 Andreas Schmid works as an artist and curator in Berlin.

In other words, Chinese artists tend to create pieces of work where audiences have to read between the lines. But that’s nothing new in the world of art.

In 2014, a number of young Chinese artists took part in an exhibition in Berlin. They told me: “Every day, we try to push the boundaries a little so that state control doesn’t become overwhelming.”

They further explained: “We hope to still remain able to highlight social grievances and depict the things that move us in this society.”

Stefanie Thiedig: Since then, Chinese art has become more abstract again. There has been an influx of dance and other performance art elements integrated into art shows. These are all things that you can’t quite grasp directly. Everything became aesthetically more beautiful and pleasing, precisely because of the increased pressure.

Deutsche Welle: What form of expression does critical art in China seek today?

Andreas Schmid: There are many instances of video art that are very successful, I think. Women like Cao Fei played a big role in this scene. I also think that Fang Lu is a great artist. She works internationally and is interested in more than just purely Chinese themes. She recently made a really interesting film with seven Israeli women.

Stefanie Thiedig: This kind of video art is typical very subtle and not openly critical of the regime like Ai Wei Wei’s work is. This form of art doesn’t stick its finger directly into these societal wounds; sometimes, it is even humorous, as is the case in a video by Cao Fei, where the factory workers share their dreams through dance.

Deutsche Welle: Following the crackdown on the democracy movement throughout China in 1989, much has changed for the visual arts as well. In the 1990s, modern Chinese art was recognised abroad for the first time for its imagery of cynical realism or references to political pop culture. How did this come about?

Andreas Schmid: In the 1990s, people were hugely astonished across Europe, the US and even in Asia that such art even existed and that it had this disruptive elements. For example, Xu Yong’s series “Negatives” which features digitised negatives of photos from the student protests on Tiananmen Square in the spring of 1989 is incredibly political. But much has changed in China since the 90s. For example, there were these really interesting installations focussing on ecology by artists such as Yin Xiuzhen or Song Dong, both dealing with the state of the Hutongs (editor’s note: alleyways of Beijing’s old city).

Or there’s the example of Wang Jianwei, who interviewed farmers who had been displaced by the Zipingpu Dam project in Sichuan province: Such a thing had never been one elsewhere in China. While you cannot claim that he is actively taking action against the regime it still remains as a strong piece of art.

Stefanie Thiedig: The aim of such projects is to capture these situations for what they are, initially as an exercise in record-keeping, but then – as part of the artistic transformation – to highlight grievances.

This applied, above all, during the rapid economic growth of the 90s, which, however, is something that ran through the noughties and continues up to now.

Andreas Schmid: Cao Fei produced a film alongside Ou Ning and others about a small village that resisted unscrupulous property developers. There were five people with hand-held cameras who recorded everyday life in this little village which eventually found itself surrounded by skyscrapers. They added an amazing soundscape to the video, resulting in a truly great film that was shown at the Venice Biennale in 2003. This is a subtle form of social criticism that – in its subtlety – stands out from any loud kind of reproach. Still, the audience of the film understands the context quite well. While witnessing this work of art you also end up being rather well informed about what has been happening at the Pearl River Delta.

Deutsche Welle: But is this film shown in China?

Stefanie Thiedig: In art galleries, at times. The government has become so powerful that is actually knows exactly what is going on when and where. Chinese security forces have to approve everything first before it is shown publicly. The overarching guiding principle is that prostitution, violence, suicide and similar issues are off the table. Occasionally, you see small stickers on gallery walls. They’re there to send a signal to the public that a piece of art was intended to be there, which the security forces in the end did not approve, and the gallery owners had to take down.

Deutsche Welle: The works of art that have been produced in the four decades since the Cultural Revolution detail in many ways how China has become what it is today. They document how the history of the country can be interpreted and reinterpreted. In liberal societies, this is something that religious leaders, philosophers, politicians, writers and journalists do. In China during the 1990s, this role and function was an absolute and exclusive privilege the fine arts enjoyed, as literature had been silenced for years after the crackdown on the democratic movement. Do artists still enjoy this kind of authority when it comes to analysing the zeitgeist?

Andreas Schmid: No. I recently sat with a Chinese artist who told me, “It’s over. A line has been drawn now, and this whole story from 1978 until now, it’s shut away like behind a steel door.” 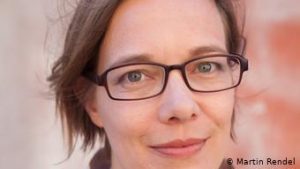 Stefanie Thiedig: This is a new era, like Xi Jinping announced himself. And he really is going to go through with his plans.

Andreas Schmid: And he’s not going to hold back one bit. I think we will have to adjust to something completely new here. Other forms of art will certainly grow. But something new has to start.

Andreas Schmid: The two are actually not compatible at all, because the digital era takes the state surveillance system to the next level. At the same time however, artists are particularly interested in dealing with the narratives of these new times.

Stefanie Thiedig: The first thing to bear in mind is the high demand for these works. That’s the big difference today. It’s all about profit, and that’s why even the government is involved: Art is an important business sector.

Deutsche Welle: This interest in Modern Chinese art as we know it originally started abroad but then quickly became a success in China itself by way of Hong Kong…

Andreas Schmid: But Chinese collectors only came about by 2005.

Stefanie Thiedig: In actual fact, the Chinese market only grew after the financial crisis, when Western investors left. After that, the Chinese really got involved. 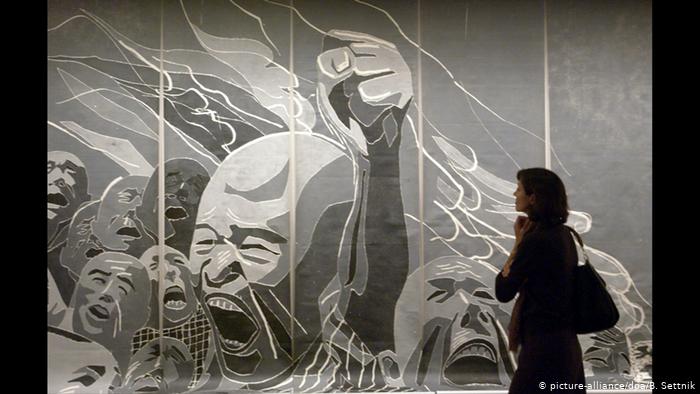 The imagery in Fang Lijun’s paintings epitomises the awakening of Chinese art in the 1990s.

Andreas Schmid: Yes, massively so, and it is also much welcomed at an official level. After all, the directive given to collectors and museums to repatriate Chinese art does not only apply to ancient works of art but to modern Chinese art as well. So those critical, world-famous artists of the 1980s and 90s are now also prominently exhibited in China.

The most expensively sold modern Chinese painting to date was purchased in 2013 for around 17 million euros – “The Last Supper” by Zeng Fanzhi. And other popular artists like Fang Lijun and Yue Minjun are also completely absorbed by the market. Are there still any artists around who prefer to shield themselves off against the market forces in a bid to retain the subtle criticism expressed in their works?

Andreas Schmid: There are only individual instances of those who defend their works in such ways. The artists couple Sun Yuan & Peng Yu, for example, create really involved artwork. For instance, they retrofitted an SUV to look like a police vehicle and then drove around all night long in Beijing. That takes an insane amount of commitment. But also, they won’t allow the authorities to crush them and amazingly enough, they haven’t been bothered by them yet.

Stefanie Thiedig: Such performances are perhaps somewhat easier to pull off than displaying large paintings. As an artist, you don’t want to become someone who is only ever shown abroad. You also want to do something for your own country, where you want to be seen and noticed, and where you want to be part of the debate in hopes of eventually getting something back as well. And this is becoming much more difficult lately.

Deutsche Welle: What about self-censorship, especially in view of these changed circumstances?

Stefanie Thiedig: That’s certainly a big topic. The fact that as an artist, you don’t really know exactly what you can and cannot pull off, makes everything subject to arbitrary decisions. This is exactly when self-censorship takes hold. However, there are still artists out there that will absolutely surprise you with just how much they still dare to risk. Then there are others, as I mentioned earlier, whose works have become more abstract or who suddenly have taken an interest in painting landscapes. But perhaps we are witnessing a moment of transition, whereby artists have to find new forms of expression. For we truly are on the verge of some radical change here.

Andreas Schmid: Also, sometimes you can show something on exhibit in, say, Guangzhou that you can’t show in Beijing, or in Shanghai or Chengdu. There are scores of Chinese artists that have left Beijing to move to Shanghai or even back to their hometowns because they can continue their lives and their work there. In Beijing, many have lost their homes and studios in the former artist quarters to gentrification.

Andreas Schmid studied art in Germany and China. He has lived and worked in Berlin since 1987 as an artist, curator and author, focusing on exhibitions and publications on Chinese art. He is regarded as one of the pioneers who have made Chinese art known in Germany and Europe.

Stefanie Thiedig is a sinologist and photographer, who has been working as a freelancer for “Kulturgut 文化财富” since 2009 – an educational cultural facility and exchange platform for freelance artists and cultural professionals in Beijing and Hamburg. She has been working regularly in China since 2000, living in Beijing from 2007 to 2017. In 2018, she moved back to Hamburg, and is currently working on her dissertation on Beijing”s art district 798.

This article was first published on Deutsche Welle. Read the original here.