For Pandit Rajan Mishra, Music Was Both Extraordinary and Ordinary

He was special in a Banarasi way, for believing that everything is ultimately a kind of play. 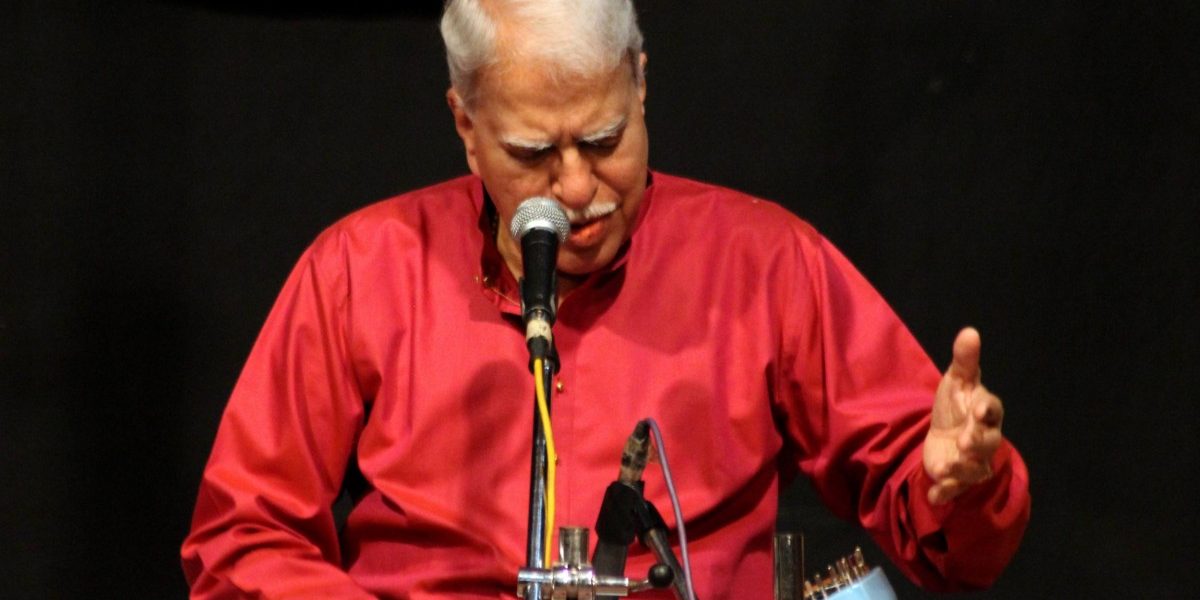 There are so many more conversations I still have to have with him, many more times of just being in his presence. I will always be in dialogue with him, always in the middle of a music lesson.

I would enter his room in Delhi, in the home he has shared with his brother, my younger guruji, Pandit Sajan Mishra. He would be sitting quietly in a white kurta-pajama, his silver paan box comfortably close, lost in a cloud of thought. He was the kind of person who wouldn’t fill the air with unnecessary sounds. He would take a moment to acknowledge you, and when he would, it would be the quickest, sharpest of looks, the smallest of smiles – often just an “Aur?” and a glimmer of the eye.

You can hear that glimmer in his singing. At the beginning or end of a phrase, it takes the shape of a curve of the voice, a tiny flourish of the note. It imbues irony into the gravest of phrases. It is a frame, a hint, a warning. A gesture that he knows that this too is performance, just another expression of the words he is singing: Jag sapne ki maya… or Jag jeevan thora…

He was special in this Banarasi way, for believing that everything is ultimately a kind of play. In his own words, he didn’t think of himself as a great singer, but as a vessel, and so only capable of play. During his lessons, he would tell us, his disciples, “If you want to sing, you have to turn yourself into water…” How can you sing about a woman yearning for her lover if you don’t let go of your self and feel yourself to be that woman, mind and body? Even if you are a man, you have to become that woman.

Listen to the metaphors that came to him, that he gave us while training us. Once, having improvised a phrase, seeing it take shape before his eyes, he paused and said with amazement: Dekho, hawa me ganth bandh rahe hai… (Look, I’m tying knots in/ with/ out of the air).

Another time, having delivered an exquisite phrase for us to follow, and us having failed disastrously, another pause, this one withering, and then, with a sarcastic laugh, to an invisible audience: “You go to the market to buy something, but when you put your hand in your pocket, you see that you don’t even have any money!” As much as he was a serious, meditative person, he had light-filled, laughing eyes; he would burst into peals of silent laughter, shoulders shaking.

Another time, in the middle of teaching, reminiscing about a performance as he often did, this time about Pandit Kishan Maharaj’s accompanying theka: Aha… Aisa lag raha tha jaise ki khichri me ghi mila rahe hai! (He was playing as though stirring ghee into khichri.)

And yes, for him, music was like ghee and khichri, extraordinary and ordinary. Extraordinary for its necessity and pervasiveness, like breath. A thing of everyday life. A thing of worship. The thing you do everyday that turns you into a sorcerer and a servant. A mundane thing of practice and routine, what makes everyday everyday. The hardest thing in the world, that proves life is too short for perfection, that always keeps arrogance at bay. An easy thing, because all it is is a thing of beauty and a reflection of the soul – all you have to do to find this beauty is to recognise and become one with yourself.

But also, a thing that is never yours. He would often pause in the middle of singing, at home or in performance, as though he had seen something amazing take place, outside of himself, and utter, Aha… or Kya bat hai. It is fitting that he had a musical partner, his brother, both a double and an other, almost a twin in the sense of being his second body and voice on stage, but with a distinct personality. Their voices layering, echoing one another, playing with each other, one filling the silence of the other, making sound and silence together. What is so amazing about them is the way silence is as much a part of their music as sound. He believed in listening, and would tell us this in his lessons: Beech beech me ruka karo, apne ap ko suno, tanpura ko suno… (Pause, be silent, listen to yourself, listen to the tanpura…). He had beautiful hands that seemed to conduct both sound and silence, that moved like water as he sang. For me, he had the same aura as his father, my first guru, Pandit Hanuman Mishra, sorcerer of both the sarangi and the voice. When holding a long note, his hands would naturally fall into the gesture he inherited from his father, of pulling the bow of the sarangi. He was always aware of himself as not just a practitioner, but as a kind of practitioner of archive, a wielder of more wisdom, not just musical but also philosophical and practical, than he could ever claim to master, given to him by the gurus whose pictures he had framed along the walls of his ancestral house in Banaras. These figures were not just gurus in name, but also individuals, humorous, hot-tempered and stubborn, each with their own stories that he revelled in repeating. And they were also god-like, in their abilities, moods, many faces. Kya buzurgo ne dekha hai rag ko… he would say with awe and appreciation. A raga is a thing to behold, a vision, but also to hold, by the hands, like a beloved in flesh and blood.

That was the sense of respect and intimacy he inherited from his father and mother, his extended family, and from Banaras, where he felt truly at home, a sense of groundedness and mutuality that does not seem completely of the modern world. The music he made was special for sounding, always, like a dialogue, with himself, his partner, his listeners, with music itself.

Most of all, I want once more to enter that courtyard in Banaras, stone-paved and framed with blue windows, where his father sat facing the ferns, and where he sat, relaxing or resting, waiting for that right moment in the evening to rise and go to the music room, to tune the tanpura to Bihag or Kaunsi Kannada, to get carried away in an ocean of beautiful sound.