The tyrant is quite popular today, many among the dead too keep visiting his house. 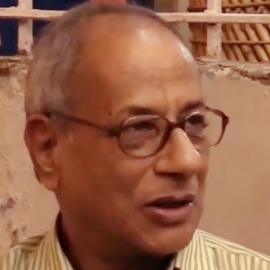 Proof of a Tyrant

There are many proofs of a tyrant’s innocence

His nails or teeth aren’t long
His eyes don’t turn red
Rather, he keeps smiling
Often, he invites you to his house
And stretches his soft hand towards you
He is stunned that people fear him

The tyrant is quite popular today
Many among the dead too keep visiting his house
(1992.)

A Day in Delhi

In that small city, one morning
Or evening, or on a holiday
I saw the roots of trees
Tightly gripping the earth
There was wind, in whose movement
A mystery was still left
In the empty street
Suddenly someone could appear
Some friend’s voice reach you

In a short while
In this small city arrived
A big city full of noise, soot, sweat and greed
(1994.)

Poetry was a daylong fatigue
And at night, like sleep
In the morning it would ask:
Did you eat at night?
(1978.)

I Had Somewhere to Go

I had somewhere to go, I didn’t
I had something to do, I didn’t
The one I waited for did not arrive here
I had to sing a song of delight, I couldn’t
All this didn’t happen, so I had to sleep like a log, I didn’t
It is comforting to think
Neither that place exists anywhere, nor that work
Neither waiting exists, nor the song, and even sleep is nowhere
(1997)

Translated from the Hindi original by Manash Firaq Bhattacharjee, the author of Looking for the Nation: Towards Another Idea of India (Speaking Tiger, 2018) and The Town Slowly Empties: Life and Culture during Lockdown (Headpress, forthcoming).