In many parts, TVF's web series feels like a lived-in experience, but does not critique the isolation of children from their childhoods. 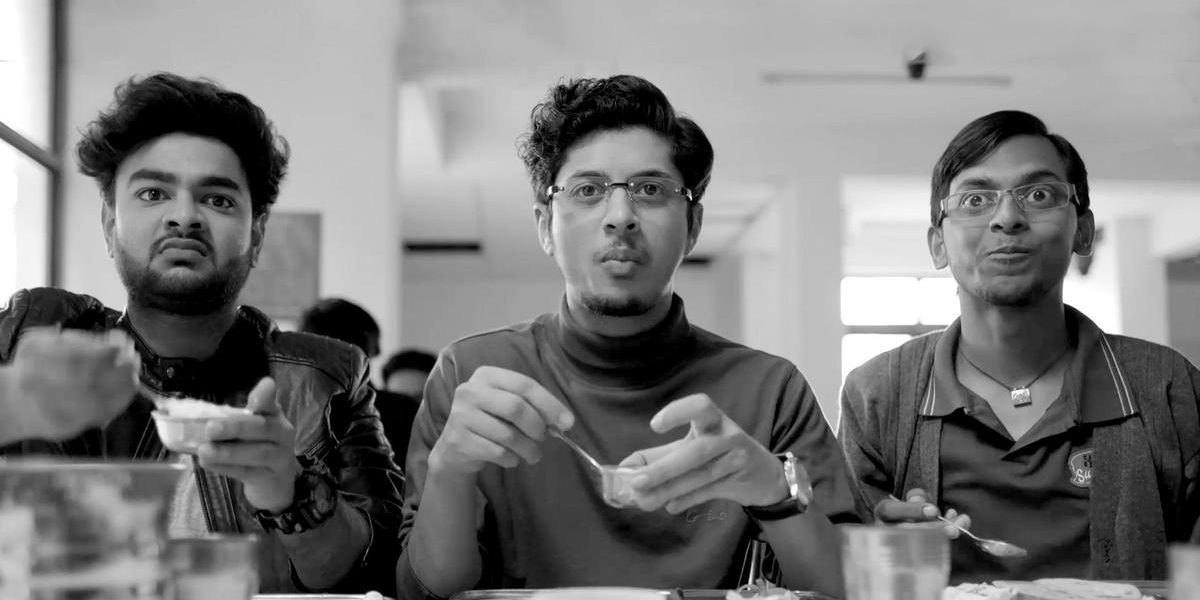 At the age of 15, numerous Indian students realise an unshakeable truth about their lives: that their worth depends on cracking the IIT Joint Entrance Exam. Nearly a million of them compete for it every year and around 10,000 make it, giving the exam the glow of a middle-class halo. Tens of thousands of applicants come to Kota every year, a city in Rajasthan, where coaching institutes for the IITs have sprung up like oases in a desert.

The Kota craze is nearly two decades old, spawning two years of scramble, sacrifice, and hope, inspiring a cult-like devotion to a cause, a God-like reverence for select authors: I.E. Irodov (physics), Solomons and Fryhle (organic chemistry), S.L. Loney (coordinate geometry). This is a uniquely Indian story – replete with an inherent three-act structure – breathing with the young delights of a Bildungsroman, and yet popular Hindi cinema has remained indifferent to it. The closest it got, even to India’s obsession with engineering, was 3 Idiots (2009) – a film that had pop philosophy, tired jokes, and misleading assertions – making its source, the novel Five Point Someone, a minor masterpiece in comparison.

So, in such a cultural climate, The Viral Fever (TVF)’s Kota Factory, a web series created and directed by Saurabh Khanna, promises to plug a crucial narrative gap. Lakhs of Indian teenagers didn’t just hit puberty and grow up – many lost a part of themselves in the dusty piles of coaching manuals, becoming faceless members of an army branded failure at the age of 18. We know all about this war, but very little about the warriors or its premier battleground, Kota.

Kota Factory opens to panoramic shots of the city. Soon, we hear about it: an auto-rickshaw driver calls it “not a city but a very big hostel”. He then talks about its history. It’s a simple hook – laying context, revealing character – which is quite effective. Then, we find out more: that segregation, central to Hindu society, is important to coaching institutes, too. Here, students are divided in different batches, based on their academic performances. Better students get better teachers and more attention. It makes sense: the mediocre students are cash cows, the brilliant ones golden geese.

We meet the protagonist, Vaibhav Pandey (Mayur More), a teenager from Itarsi, who, wanting to crack the IIT entrance exam, has enrolled in a coaching institute, Prodigy. He moves into a house as a paying guest, where he meets fellow IIT aspirants: Uday (Alam Khan), a jolly, carefree boy, and Meena (Ranjan Raj), a bespectacled, withdrawn chap – devoted to books – who talks in chaste Hindi. These are compelling, realistic portrayals: boys whose eyes don’t glint with curiosity but burn with fatigue in the anticipation of a marathon they didn’t choose to run. At one point, they roam around Kota, on a scooty, and we remember 3 Idiots, whose protagonists frolicked likewise. And sure enough, Uday invokes 3 Idiots, saying, “This is not a film.” You agree: Hindi films typically paint school and college students in broad strokes, depicting them as people devoid of identities, disconnected from social and economic realities, only interested in two things: romance and friendship.

Kota Factory, to begin with, avoids these clichés, but only to an extent: in a matter of days, Uday and Meena (literally) go out of their ways to help Vaibhav – driving him around the city, asking others for help – as if they’ve known him for months. These scenes – underscored by the song ‘Bana Hai Yaaron Se Mera Jahan’ – don’t belong in this series but look like a contrived attempt to ‘Bollywoodise’ this story where friendship, above everything else, has to reign supreme.

But Kota Factory’s intellectual curiosity about the city, and its people, makes the series’ first half enjoyable. We understand that Kota has its own hierarchy: an admission to Maheshwari Classes (presumably modelled after Bansal Classes) is revered, sought after, and difficult – much like the IITs. The city has many local stars – young, cool ex-IITians who are not just faculty members in coaching institutes but also counsellors and spiritual guides. One such character, Jeetu Bhaiya (Jitendra Kumar, a star of sorts in the Indian web series firmament), bonds with Vaibhav and nudges him to introspect his choices. Then, there are other teachers – not from the IIT, teaching less glamorous subjects (such as inorganic chemistry) – who don’t get the same attention and respect from the owners of the coaching institutes (and often, students).

More importantly, Kota Factory, in this segment, looks like a lived-in experience. Mediocre films or series impose stories on their characters and milieus, the good ones emerge from the very same restrictions. Kota Factory respects the nuances of its material. I chuckled when Vaibhav gets irritated with the “monkey and the pulley problem” – stuff that had annoyed me too, back in the day (H.C. Verma, Chapter 5). There’s an elaborate dig at chemistry in general – and inorganic in particular – which is both hilarious and cheeky, like an adult avenging his childhood demons. And the inevitable: the shame of an IIT reject. “Seven years. Four years of graduation and three years of job,” Jeetu tells Vaibhav. “It takes seven years to overcome the trauma of these two years.”

Sometimes fiction cuts too close to real life. I had been there before, done it all: attended coaching classes, danced with Irodov, sang with Loney, memorised the colours of gases and periodic table (an ingenious mnemonic, learnt in school for noble gases, is still fresh in mind: “Hai [Helium] Na [Neon] Agarkar [Argon, Krypton] Zero [Xenon] Run [Radium] Par”). But IIT didn’t happen, nor did any of the NITs, and that shame and humiliation hounded me for years. Failing the IIT entrance exam didn’t just make me a mediocre student: it felt like a personal, familial and moral failure.

That feeling stung so deep and hard, because it seemed systematic, even institutional – reinforced by family members, their friends, and teachers, through condescension and comparison – and sustained, in large part, due to the culture of coaching institutes, which is capitalism on quaaludes: a system where numbers are adored, and people are ignored. 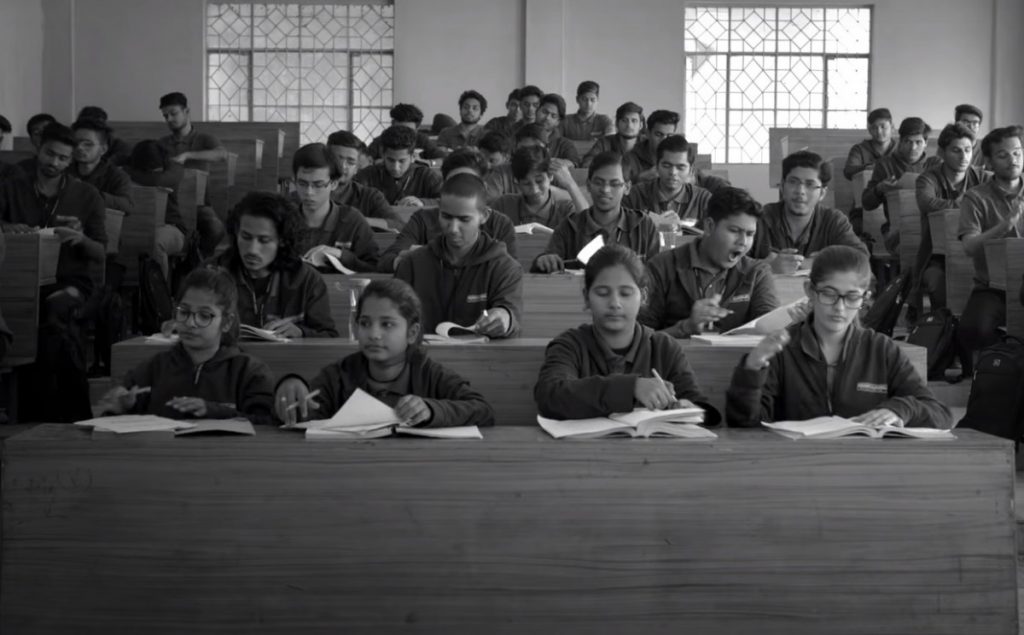 Kota Factory isn’t interested in this aspect of the story. Instead of critiquing the culture of coaching institutes – which isolates children from their childhoods, discourages them from attending schools, frowns upon hobbies (or anything else that detracts them from the middle-class bottomline) – it accepts its abnormalities as a given. At the end of every episode, its credits thank “Shri V. K. Bansal (Founder and Chairman, Bansal Classes) and Shri Asheesh Sharma (CEO, Resonance Eduventures)”. The series itself, in fact, is co-produced by Unacademy, a Bangalore-based firm that develops apps for IIT aspirants – and its promotion, in the series, is relentless. There’s a plug for Unacademy in, and at the end of, every episode. In fact, sometimes entire scenes are designed to showcase the app, resulting in anticlimactic, borderline absurd, scenes.

Besides, Kota Factory, even though commenting on unrealistic Bollywood films, wants to be part of the same system, which results in wildly inconsistent writing. Like 3 Idiots, it divides the students in two camps: nerds and non-nerds. A studious girl in Prodigy, Meenal (Urvi Singh), wears big glasses, braces, and ties her hair in thick ponytails: you get the picture. Vaibhav falls for a girl in his school, Vartika (Revathi Pillai), whom he starts teaching to help her crack the Maheshwari entrance test. The portions centered on Vaibhav and Vartika result in a few poignant moments: alive with the tenderness of a high-school romance, but also produces painfully cloying scenes and dialogues. Meena falls in love around the same time, and his feelings are needlessly exaggerated: he perpetually clings to his pillow, beaming a sheepish smile.

Also Read: How IITs Turned From Nehru’s Vision of Technology To Catering Engineers for MNCs

Then there are other inconsistencies. Vaibhav, struggling to score good marks in Prodigy’s tests, suddenly becomes a good student mid-series. He cracks the entrance test for Maheshwari (after studying several topics at the last moment), a desperate attempt to turn an everyman into a hero. The series is also disappointingly conformist and maudlin, in line with many Bollywood films, which doesn’t challenge the parents’ worldview (“they can be wrong,” says Uday at one point, “not their intentions”).

It is in TVF’s business interests to not critique this culture, because it benefits from it. Founded by ex-IITians, TVF has a cult-like following among the many engineering students, and engineers, in the country. Many sketches of theirs, in the early days of the company, depicted the comical idiosyncrasies of such students. Each episode of Kota Factory has around 10 million views; the series is rated 9.5 on IMDB. Its core audiences – patting themselves on the back for shunning mediocre Bollywood films for being unrealistic – seem disinterested in looking at the mirrors reflecting their stories. Escapism, after all, is a spectrum, too.