Das described the allegations as “vulgar” and denied having met the women. 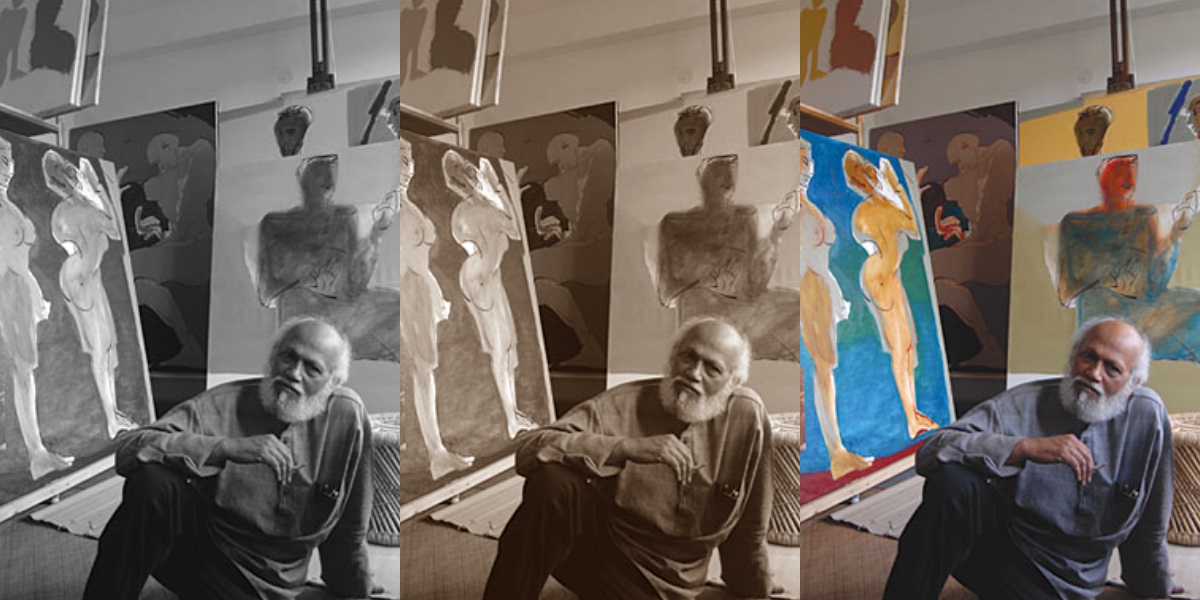 In a Facebook post, Nisha Bora, a Mumbai-based entrepreneur who claims to have been introduced to Das by her in-laws at a party in 2014, accused the celebrated painter of forcibly kissing her in his studio.

“I visited Jatin in his studio, which was in Khidki Village. I don’t recall the time of day, but that it was well within daylight hours. He poured himself some whiskey; offered me one too, but I refused. It was a wonderfully cluttered space filled with creative energy. The next thing I knew, he attempted to grab me. I wriggled out of his embrace, flustered. Then he did it again. This time, he managed a clumsy kiss on my lips. I recall the feeling of his beard on my skin. I pushed him away, and moved away from him. At that moment, he said, “Come on, it would be nice”. Or something like that. I have heard those words quite a bit in my head over time, but they are distant echoes now. What I recall clearly was his disbelief that I was pushing back. I picked up my bag, stepped out into the sun, and ran home,” she wrote on Facebook.

She was prompted to share her story after she came across a post on Instagram, which also accused Das of sexual harassment.“Earlier, when I talked about it with a few senior female artists, I was told that this was par for the course. They brushed it off, saying they have all dealt with this. But when I saw there was one person who had put out her own account of her encounter with him (Das), I knew I didn’t want it to die without a whimper. I wanted to share my story,” she told Indian Express. 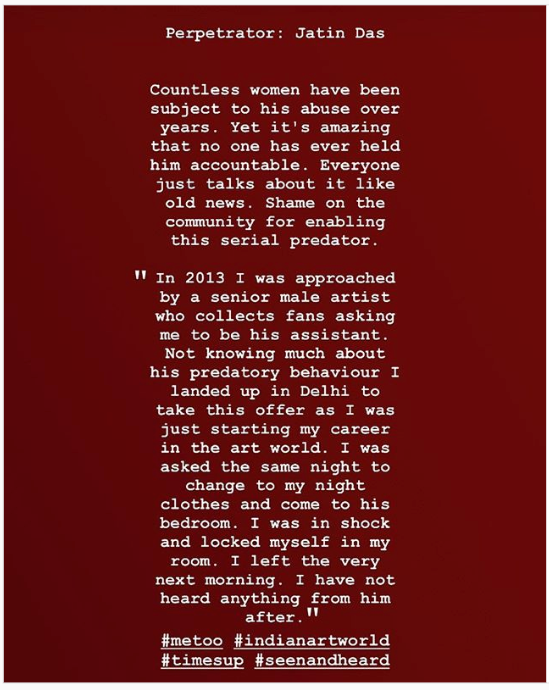 The woman who wrote the Instagram post anonymously claimed that she had assisted Das in his work in 2013. “I was asked the same night to change to my night clothes and come to his bedroom. I was in shock and locked myself in my room,” she said. “I left the very next morning. I have not heard anything from him after.”

“I called a friend to come and pick me up the next day, because I was in shock and finding it difficult to walk out on my own,” she told Indian Express.

Later, Garusha Katoch also accused Das of inappropriate behaviour in a post on Twitter. Katoch, who claims to have worked as an intern at the Jatin Das Centre of Art, claims the painter alienated her from other interns and asked her to live in a spare room in his house in Asiad Village.

Jatin Das: Renowned painter, Padma Bhushan recipient and someone who tried to take advantage of me when I was 20. 5 years too late but it’s about time I speak up. @NishaBora thank you for speaking up. #MeToo pic.twitter.com/PgheXFOy5R

Under the pretext of dropping her home, Das took her to his home and tried to tightly hug and kiss her.

Das described the allegations as “vulgar” and denied having met the women. “I do not know who they are,” he told Scroll.in. “It’s so painful and vulgar. Anyone can say anything about anybody and it gets published … There might be truth to both sides but it’s the innocent which loses dignity. One has worked and slogged all their life with truth.”

Anushree Majumdar, journalist with the Indian Express, also shared an instance where she “spent an evening at Alliance Française hiding from him”.

(1/3) I was fresh out of college when I met Jatin Das in 2006. I was a project manager for the first Monsoon Festival in Delhi, 2006. I had to pick up a painting from his studio, I called him to ask when. He was sweet till he asked me if I would work for him as his assistant. https://t.co/PsQ9WRO1tB

(3/3) On the day of the opening, he called me to tell me that he was coming only to see me; and I must work for him after the festival is done. I spent all evening at Alliance Francaise hiding from him. He called many times the next day; he gave up when I didn’t answer his calls.

Meanwhile, the author’s daughter, Nandita Das, who has been a vocal supporter of the #MeToo movement, wrote on Facebook that she will continue to support the movement “despite the disturbing allegations made against her father”.

“I have maintained from the very start that this is the time we all need to listen, so that women (and men) feel safe to speak up. At the same time, it is also important to be sure about allegations so as not to dilute the movement. I am touched by the number of people – friends and strangers – who are concerned and are trusting my integrity. I do believe truth will prevail. And that is all I have to say on this matter,” she wrote.