India Art Fair: An Iqbal Couplet, the Word 'Shaheen' and the Delhi Police

The police, acting on an anonymous complaint, came to the fair to enquire about the intention behind a artwork that celebrated women and were concerned about an Urdu couplet by Iqbal used in the piece. 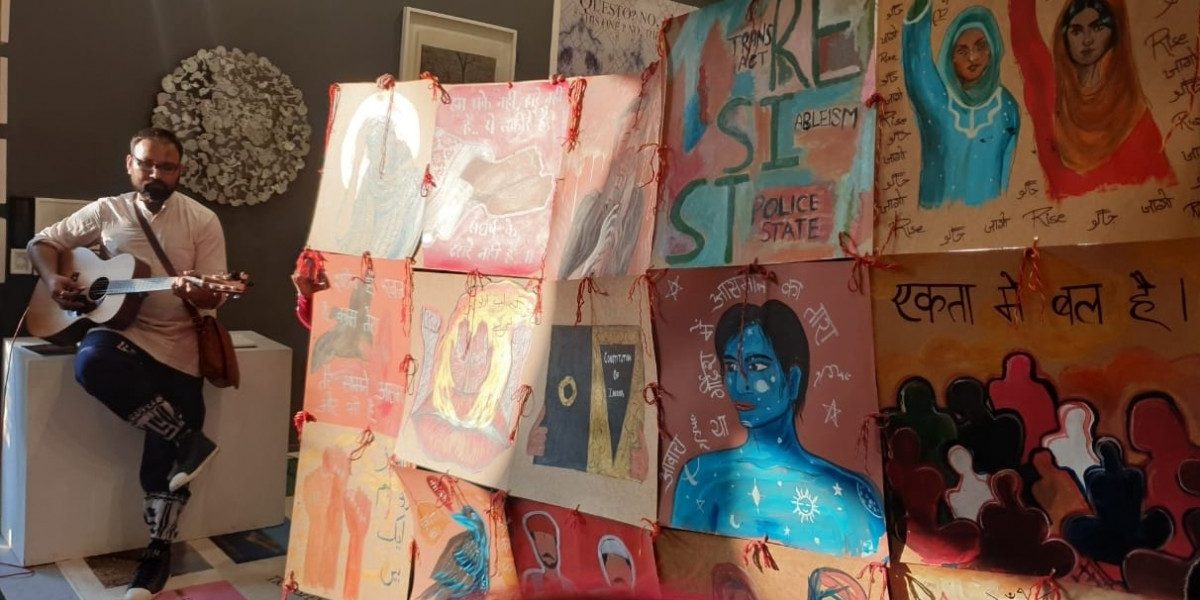 The artwork that led to the anonymous complaint at the India Art Fair, February 2020. Photo: Special arrangement

“It was completely out of the blue. We were shocked initially,” says Yaman Navlakha, who along with Gargi Chandola was steering the community mural at India Art Fair 2020 at NSIC Grounds, Okhla. Just a day ago, their performative art work was disrupted following an anonymous complaint to the Delhi police which claimed that some artwork against the Citizenship Amendment Act (CAA) was being exhibited at the Fair.

The work, “The Wall”, was part of the Italian Embassy Cultural Centre booth which was curated by Myna Mukherjee.

“We were all painting together. We had called people from everywhere, including people from the LBGTQIA+ community. We wanted to showcase togetherness – women from different communities coming together and painting. We were very clear about that we didn’t want to talk about anything political in this but we also wanted to celebrate the strength of the women everywhere and one of the quotes was ‘there is beauty in resistance’,” says Gargi Chandola. “The artwork was not about any one particular protest or issue. It is about women of India.”

Good morning. Y’day at India’s premier Art Fair in Delhi, police removed an artwork which said “Hum Ek Hain” (We are One) 👏👏👏 pic.twitter.com/DxhvrzW2gB

The police, acting on the complaint, came to the fair to enquire about the intention behind the work and were concerned with an Urdu couplet used in the work:

“You are the great Falcon, your passion is flight
Look ahead, there are more skies to transcend.”

According to Mukherjee, “We never felt there was anything wrong with the artwork. We explained the matter to the police and they closed the issue and left.”

“We got mauli (a sacred red thread used in ritualistic ceremonies of Hindus) from Sai Mandir and we had got thread from Nizamuddin Dargah. We tied these pieces together and a singer was singing a poem. I was distributing these threads to the audience and asked if they want to participate. People were crying, I was in tears – it was a cathartic moment. In that moment people became one with the artwork and that very moment, police entered and in that cathartic moment, it really came as a shock,” said Chandola.

Meanwhile, the artists have been trying to locate the artwork. According to reports, the Delhi police has not confiscated the piece but the duo is unable to trace it.

The Post Art Project issued a statement on its social media accounts condemning and questioning the incident. Chandola expressed disappointment with the India Art Fair organisers for not extending them any support during the incident.

Chandola and Navlakha have also said that the “Art Fair is not a safe space”.

Mukherjee said, “It speaks terribly of the times. There is a certain type of stereotyping that led to the audience to assume so many things about the art work without even taking time to understand it. I wish we didn’t have to end the performance one hour earlier. The Italian embassy is putting out a statement on it soon. ”

The India Art Fair organisers released a statement saying they were not aware of the activities at the Italian Embassy Culture Centre booth. They also added that while they “embrace the freedom of expression”, ensuring safety and security of their visitors was “paramount”.

“The organisers only became aware of the activities when the police arrived. They informed us that they had received a complaint. We provide a safe space for all our visitors, however, as a result of the actions of one of the curators of the Italian Embassy Cultural Centre, the police came to the fair,” the organisers said.

Artist Ram Rahman said, the incident reminded him of Sunil Gupta’s show “Sun City and Other Stories: Paris-San Francisco-Delhi at Alliance Francaise in 2012. Th exhibition was shut down following an anonymous complaint that its content was obscene.

He feels the impending elections in Delhi has also added to the tension.

“The irony is that in the same premises, GallerySke had a wall with works that referenced the constitution. It was in reference to the current debate but nobody complained about that. In this work, the viewer took note of the Muslim looking women and misinterpreted it. The intolerance is rampant. Earlier there was fear too but after the Jamia incident, it has gone. People are willing to express their opinions.”

Shailaja Tripathi is an independent journalist.