How Artists are Transforming a Remote Kangra Village

In an ongoing festival in Gunehar, Himachal Pradesh, artists from around India and the world transform local spaces with the involvement of residents – putting the village on the map for the first time. 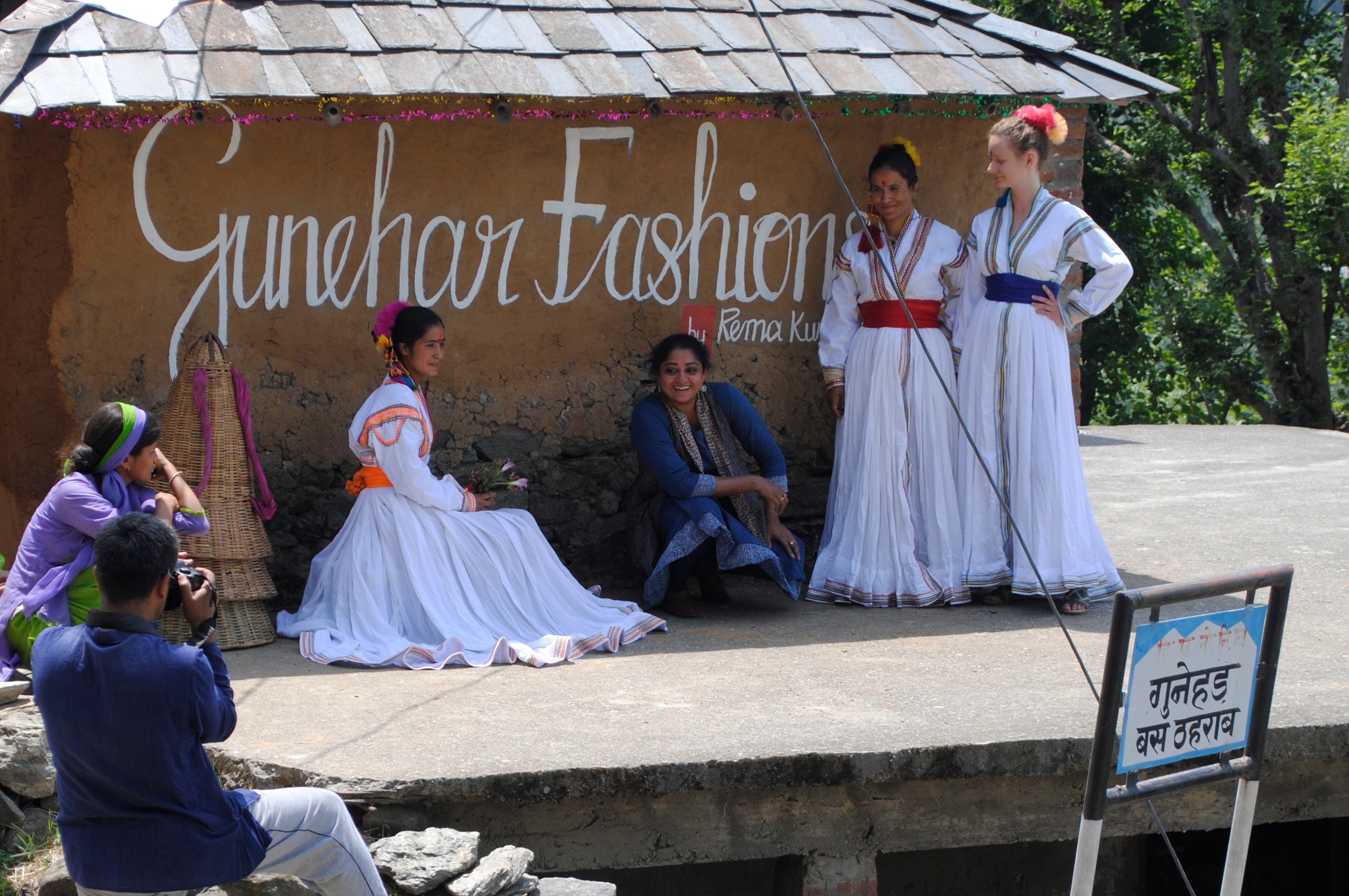 Gunehar, Himachal Pradesh: Everybody in Gunehar, in Kangra valley, Himachal Pradesh – a village you cannot locate on the map despite its proximity to the popular paragliding destination Bir-Billing – knows Maniram. On May 30, Amrit Vatsa, an IIT graduate who produces 3-minute stories on film, screened his film on the village gardener who owns a gun. The villagers were in splits. They had never taken note of the unassuming Maniram – until Vatsa gave him a new identity, informed by his perspective.

When an entire village turns into a canvas and its people become participants and also viewers of art, the familiar begins to acquire new dimensions. Gunehar is hosting a month-long art mela, or festival, between May 14 and June 14 – bridging the gap between urban artists and rural viewers.

In 2013, Frank Schlichtmann, a resident of the village who runs 4 Table Restaurant, invited 13 emerging artists to live in Gunehar for a month and turn deserted shops into art projects – with the involvement of the villagers. The challenge for the urban artists was to connect with rural sensibilities rather than talk down to the villagers. Christened ‘Shop Art/Art Shop’ (SA/AS), the umbrella venture with its many smaller projects drew 6,000 visitors in its inaugural year, according to its Facebook page, putting the village ‘on the map’. It was a success because of this and also considering the fact that two of the artists were non-Indians and living in a village for the first time.

The art mela was a way for Schlichtmann to express his love for the village he had adopted and vice versa. SA/AS 2016, the festival’s second edition, hosted by him in collaboration with artists Ketna Patel and Puneet Kaushik, involves 11 contemporary artists from around India and the world.

The absence of funding for public art projects – a repeated story – has left Schlichtmann undeterred. The SA/AS festival is partially funded through crowd funding. The final week of the event is open to the public, with a grand fashion and musical show involving local residents.

Schlichtmann’s love for the village is now shared by an international family. Ksenia Bosak, a young Russian web designer, lives in a village home and has designed, on a voluntary basis, a colourful ‘virtual village’ as a fun way to explore the real one from anywhere in the world – to enter the art shops, engage in conversations with the artists or just witness the process. Sue Fitzmaurice, from New Zealand, blogs on everyday happenings. Vatsa (who screened his 3-minute film about Maniram) maintains an amazing visual village diary that is followed by art lovers across the globe.

Gargi Chandola, an illustrator from Delhi, finds in SA/AS  an opportunity to explore the meeting points of graffiti art and Kangra miniature, a form that is losing visibility. She meets the challenge of treating miniature motifs on entire walls of the village square. Her team is made complete by Atul and Sushil Kumar of the Kangra Arts Promotion Society, Dharamshala. Villagers approach the team themselves, for they all want some art in their shops. Gargi Chandola and her painters outside one of their transformed buildings. Credit: 4 Tables Project

The noisiest shop in Gunehar is the ‘one rupee cinema’ set up by K. M. Lo from Singapore, a highly respected director who holds workshops on cinema in Cambodia, China, the Philippines, Thailand and Laos. It is a favourite hangout for noisy kids. Lo fails to control their bubbling energy even in the four languages he speaks. But he succeeds in teaching them how to make cinema cost as little as one rupee. With some slick camerawork and a raw chicken disguised in dough, he creates an alien attacking the earth. Everything from zombies to Hamlet’s perpetual dilemma – to be or not to be – gets hilarious treatment in one rupee cinema. If Lo wants to ‘bring joy to people’ through cinema, there certainly seems to be an overdose of it among the local children – his crew and cast. On Sundays, the entire village turns up to watch their own Star Wars in the open theatre. K. M. Lo’s ‘1 Rupee Cinema’ with some of its aficionados. Credit: 4 Tables Project

The panchayat has offered spaces for the festival’s use. Mudita Bhandari, a renowned ceramic artist from Indore, is transforming an entire wall with her architectural terracotta forms, mixing stone and slate, materials used in local homes. Village girls volunteer to work with Bhandari; now they are demanding a permanent kiln for making terracotta figurines.

The forsaken construction sites of Gunehar – unused courtyards, stairs, terraces – are used by Sheena Deviah from Bangalore and Bianca Ballantyne from Bir and Goa for their Hidden Spaces Collective. Deviah and Ballantyne use materials discarded or abandoned by local residents in their art installations, to give meaning to ‘dead spaces’, so that people begin to respect them once more.

Beside the bus stop is Rema Kumar’s Gunehar Fashions Shop, formerly a teashop. Now, local songs play while the sole surviving woman of Gunehar who can stitch luanchadis, the traditional dress of the Gaddi tribe, is busy sewing the outfits in new designs adapted for modern urban women. Kumar is a Delhi-based textile and fashion designer who is collaborating with local weavers and tailors to revive traditional textiles and garments. A fashion shoot at Rema Kumar’s (in blue above) textiles and garments shop. Credit: 4 Tables Project

‘Photo Ki Dukan,’ set up by the London and Pune-based Ketna Patel, invites local children, adults and families to paint, write or get photographed. ‘Gunehar ki ladkiyan sabse sundar hoti hain‘ (‘the girls of Gunehar are the prettiest’) wrote someone, while someone else painted a chai cup. Patel chooses from what they have written and drawn to digitally create ‘pop art’ narratives of each artist.

Puneet Kaushik from Delhi looks at Gunehar from the perspective of a paraglider gliding down from Billing. During his first week in the village, he painted rooftops to endow the village with a distinct identity and, using a house under construction, created an installation using rocks, recycled fabric and plastic bottles called ‘Those Who Live in Glass Houses’. An unused sliding door is turned into ‘Mata ka Dwar’, with rolls of mauli, or ceremonial thread, tied around it. The local shopkeeper participated in the project by teasing Kaushik: “If I put a danpatra [donation box] here, I can also make some money.” One of Puneet Kaushik’s many installations in Gunehar: ‘Who Live in Glass Houses’. Credit: 4 Tables Project

The art mela connects Gunehar to the world. It becomes a destination, not just yet another village for noisy tourists on their way to Bir-Billing.

You can visit the village at www.shopartshop.com/village/intro.