The eminent painter, scholar and Gandhian, who passed away on March 21, 2019, emphasised the need to understand that it was the richness of local crafts which formed the basis of India’s diverse cultural traditions. 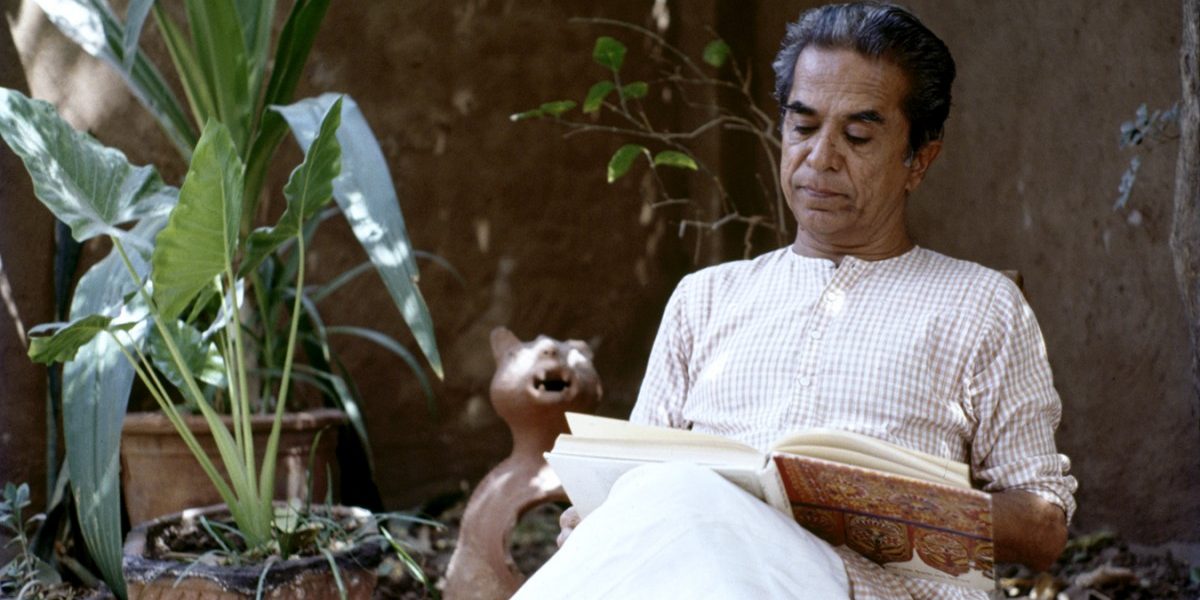 Artist, author, cultural anthropologist, a teacher at the Gandhi ashram at Vedchhi, Gujarat, and the National Institute of Design – in a lifetime of work, Haku Shah wove his many passions into a single pattern that made no distinction between ‘high’ art and ‘low’ craft, seeing them as one.

The soft-spoken artist, who passed away in Ahmedabad yesterday at the age of 85, wore khadi all his life. He saw craft not as a process of making dry prototypes but as the weave that holds society together, responding to local landscapes. In his view, the diversity of cultures and the plurality of religious traditions of India was the most valuable living heritage that the country could boast of. The river, the tree and the positive energies of human creativity are what inspired the artist throughout his multifaceted life.

Following are excerpts from an interview with Haku bhai, as he was called, that first appeared in Tehelka more than a decade ago, but seems as relevant if not more:

You have worked extensively on the diversity of our cultural traditions, its crafts. Do you think we have been able to understand their significance?

We have had different cultures coming on to us all the time but we have not understood our traditions perhaps because they are too close to us. It is important to understand the importance of the local in the development of different art traditions in India. Talk about any village or town, and it has its special craft. Moreover, the crafts emerged out of a worldview in which not only are the different arts integrated, crafts merge seamlessly with life as well.

Take the tribals of Vasava in the Gujarat-Maharashtra border. From the forest, they gather wood to make a seviyan or spaghetti-making machine. The machine is made in the shape of a bull, which has a hole in the centre that is the functional part. The machine is a beautiful sculpture. Further, the women decorate the bull with their ornaments while making the seviyan and sing in accompaniment. What emerges from the exercise is food. So many different arts are integrated to make seviyan. This is true for any craft in India. Or take the example of the embroidery of Gujarat – the woman embroidered a cap for the baby inside her.

When we talk of the world we talk of fabric. Take a cloth, tie a knot and dip it. That is what makes design or art. The knot has a local significance. These days I see many girls riding scooters in Ahmedabad who wear dresses made of jawariyu cloth (a particular tie and dye method). The girls wear it because it is in fashion but they don’t know what it is. In this tie and dye fabric, the dot signifies the grain jowar grown by tribals who originally wore that fabric. Because the dot referred to the grain they grew and ate, they called the design jawariyu. In this technique, clay is sprinkled on the cloth which is dyed. The area below the clay becomes white. Then the clay is washed off the cloth.

Even in embroidery, we were aware of smell – like when cardamom seeds and cloves were embroidered. Music and dance too were represented in it. A craft bore the sound and smells of human activity. This was our tradition and we have missed its significance altogether. Go to any art school and ask them about the arts of the area and they will say that they do not know what is happening in the next village.

Can you give an example of a craft that bridged major communities?

Ask anyone what Gujarat’s Patola fabric is and you will not get any reply. There are Patola saris but there was also Patola cloth, which was traditionally used by the Nagar Brahmins as well as Bohra Muslims for ritualistic purposes. In my wife’s village in Burhanpur, I saw Patola curtains in the house of a Bohra Muslim. My mother got Patola at her marriage.

I am still optimistic that all of this heritage will not be destroyed. Though we have lost a lot.

What have we lost in Gujarat?

We have lost Patola. Also, those who talk of mandir-masjid don’t know the reality of jan, or the people. If at all we try to get near them we make them like ourselves, bring them into the mainstream. Make a tribal a minister, and he will start feeling that the manner in which he has been living till then is bad. We take away his identity and he too starts believing it.

Apart from the mandir or masjid, there are thousands of small temples all over India. Has anyone ever spoken of their importance? The Vagharis (tribal as well as non-tribal community considered ‘untouchable’) of Gujarat make cloth for the mother goddess temples they build. Their temples are small, like one brick placed over two brick like a roof. Though there is no statue inside, they believe that the mother goddesses are present there – the meldi and the khodiyar. They believe that the goddess steers their lives. Similarly, there are thousands of tribal sanctuaries with terracotta figurines under trees, in groves, near rivers and in the mountains. This is also our heritage.

German anthropologist Eberhard Fischer and I have collected a trunk full of terracotta objects from various villages in Gujarat. The trunk has not been opened in the last 35 years because nobody wants to see them. What they want to see is work that comes in handy for fashion design. They don’t want to see the magic of mitti (soil).

You have spoken of the cultural weave bringing communities together through craft in Gujarat. How much of that interweaving of Hindus and Muslims do you see in Gujarat today?

I think Hindus and Muslims who weave do not have much to do with the conflict that takes place at higher levels of society. They stay side by side, though I must say that the impact of the confrontation that is taking place on a different level does impact them in some ways.

I would like to tell you how it was. Some time ago, I had curated an exhibition on the kumhar’s (potter) pots that are used by all communities from birth to death. I included the pots made by Sara, daughter-in-law of Ibrahim, from Kutch. She made pots that are used for baras or the twelfth day of funeral rites among Hindus. Sara arranged three pots each in four rows, and tied a thread around them. In reality, the Hindus called the Muslim potter to break the thread so that the soul of the dead individual is set free. This is still prevalent in Kutch but due to the storm (of divisive politics) that has been unleashed in Gujarat, the mentality of people has undergone a change.

In Ahmedabad, Muslims have a presence in the areas of food and craft. They work in the Teen Darwaza, or old city, area and even drive rickshaws in our Jain locality in the new city. But there is fear in the heart. I don’t know how the communities have been sundered but in art and culture, they have always meshed. And they should stay like this. What is the mainstream perception of art?

Art is considered still life or free-hand drawing. An individual who works on canvas is defined as an artist, no other. When people talk of sculpture they think of bronze. No one talks of the clay jars in the house of the Adivasi. By itself, it is a great sculpture in the Indian tradition.

I would say that in India, we have not been able to understand old practices – like a human embracing a tree, composing songs, making terracotta figurines offered to the gods. People in the mainstream will say it is madness. But I feel that a large part of our heritage exists in ordinary people whom we consider backward or uneducated. We only have celebrations, no in-depth documentation.

I feel artists have to be connected to ground reality – rivers, trees, women’s activities. If I walk in a park, why can’t I make a painting there or involve children in the activity?

Once a Gujarati proverb, gujarati achat na mahim (less is more) described the attitude to life. Now people want more and more. Interestingly, the world talks of recycling, but in our country, a sari or worn-out cloth was reused to make a godadi (quilt), which is part of our most valuable heritage. In Kutch, quilts are a symbol of prestige. Godadi and clay jar – that’s what gave an individual prestige. We lack that now. As for artists, they should move towards our rich heritage.