In 'Indian Botanical Art: An Illustrated History', Martyn Rix brings together botanical art of Indian origin spanning a period of 300 years, focussing on the 18th and 19th centuries.

In a new book, Indian Botanical Art: An Illustrated History, renowned horticulturalist Martyn Rix brings together botanical art of Indian origin spanning a period of 300 years, focusing on the 18th and 19th centuries.

Drawn mostly from original works held in the collections of the Royal Botanic Gardens, Kew, some of the paintings have never been published before. They showcase the richness and variety of art commissioned from talented, mostly unknown, Indian artists who made a substantial contribution to the documentation of the flora of the Indian subcontinent.

The following illustrations are excerpted with permission from Rix’s book, published by Roli Books. 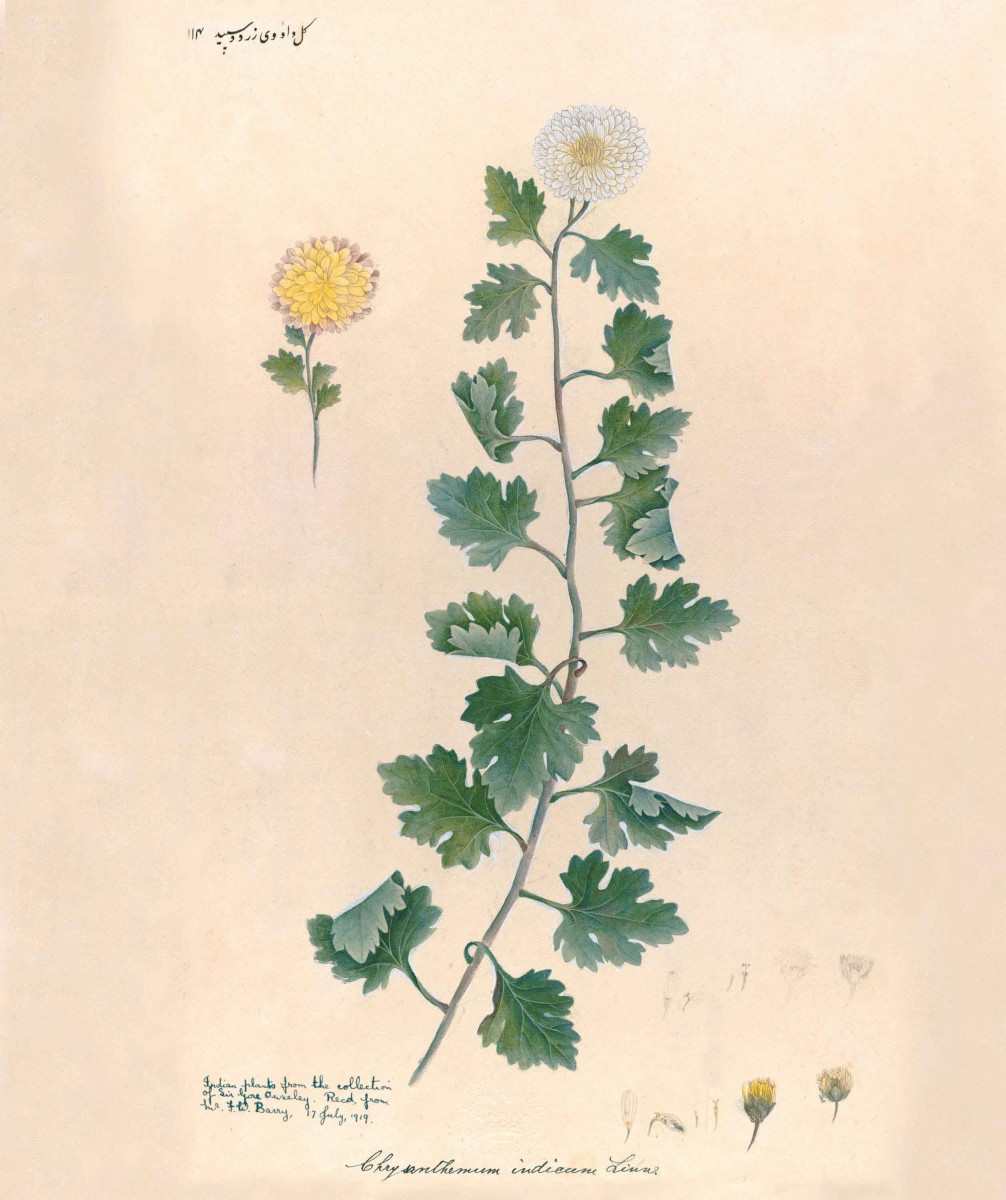 Chrysanthemums, now such popular flowers all over the world, originated in China. They were grown in gardens there from the 5th century BCE, and transported to Europe in the late 18th century, first to France and reaching England almost in the same year as this one was painted. This painting of two varieties shows that they were already established in India by the beginning of the 19th century. Cannabis has been grown in India for thousands of years, and different parts are eaten as well as smoked. It is valued for its therapeutic properties, but its adverse effects on mind and body were recognised in the ancient texts. 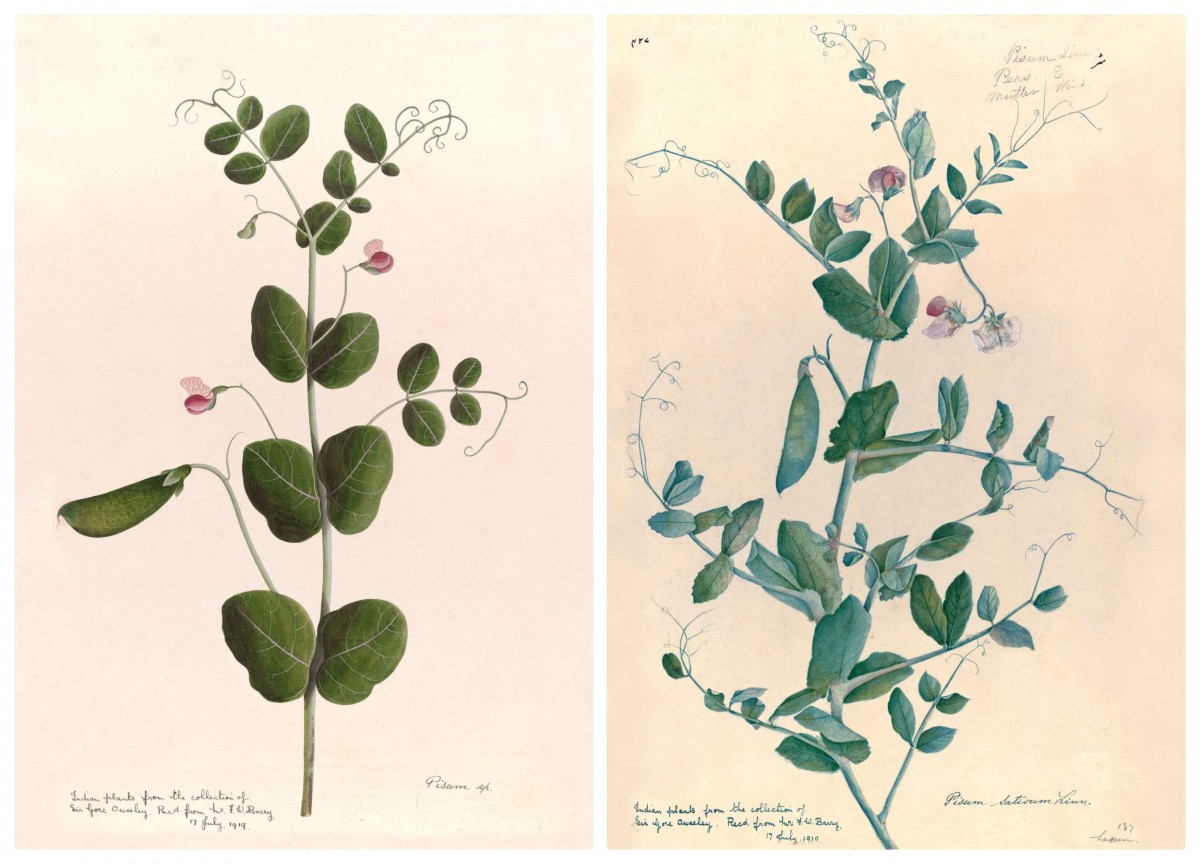 Shown here are two varieties of garden pea, found wild in the Mediterranean region east to Afghanistan, and long cultivated (since 7000 BCE), and found in ancient archaeological sites such as Jericho and Troy. Peas, lentils and green gram (mung beans) were grown in the Indus valley in around 3000 BCE. The early pea varieties all had bi-coloured flowers, as here. These two paintings of peas are very different in style. The illustration on the left is elegant and artistic, stylised and simplified, with unnaturally round leaves and stipules. The one on the right is European in style, more realistic, with folded leaves, a curved stem and carefully copied tendrils. 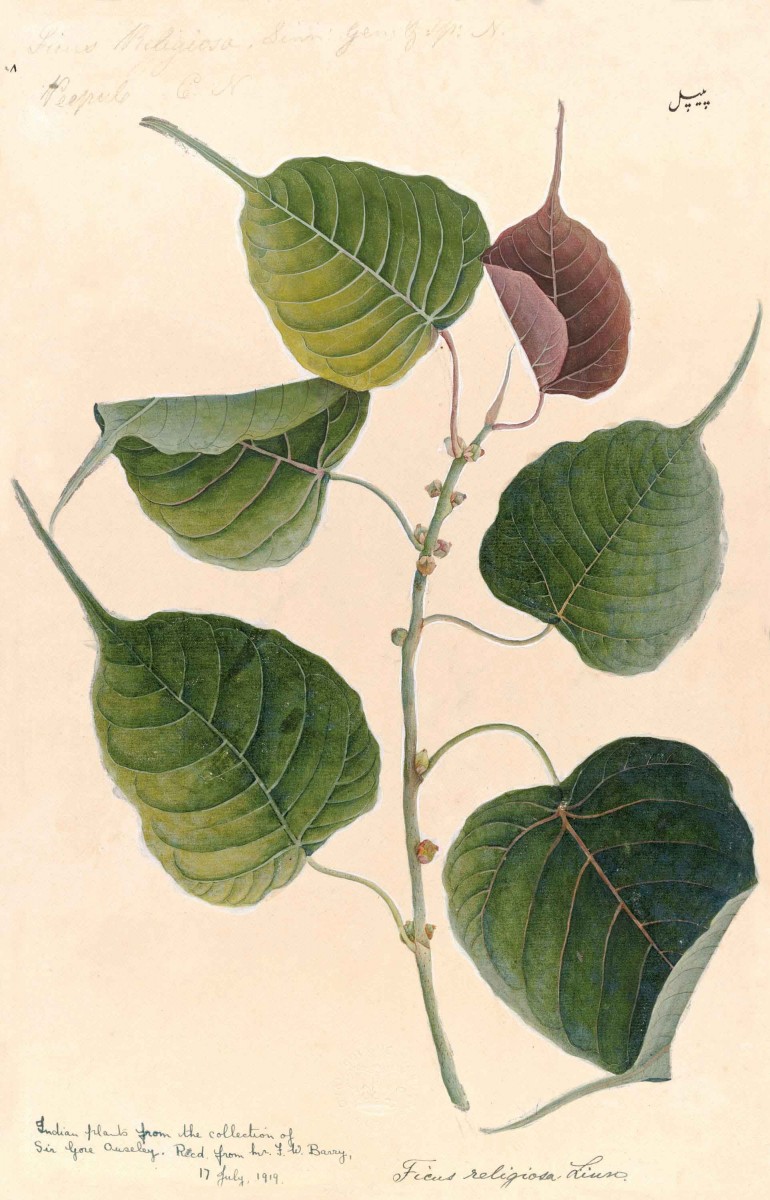 This is the famous fig tree under which the Buddha attained enlightenment, and is sacred to Hindus and Jains, as well as to Buddhists. Ancient trees can grow to 30 m in height and are often very wide. The leaves have a long thin stalk and a characteristic long pointed tip, known as a drip tip, which make heavy rain drain off freely. Like the leaves of aspens, they also move in the slightest breeze. The fruits are small, about 15 mm in diameter, purple when ripe. The peepal tree has many traditional medicinal uses, from asthma to diabetes, gastric and genito-urinary problems: the bark is the most important part of the tree, but leaves, latex, fruits and seeds are also used. The latex in particular is valuable as a fungicide. 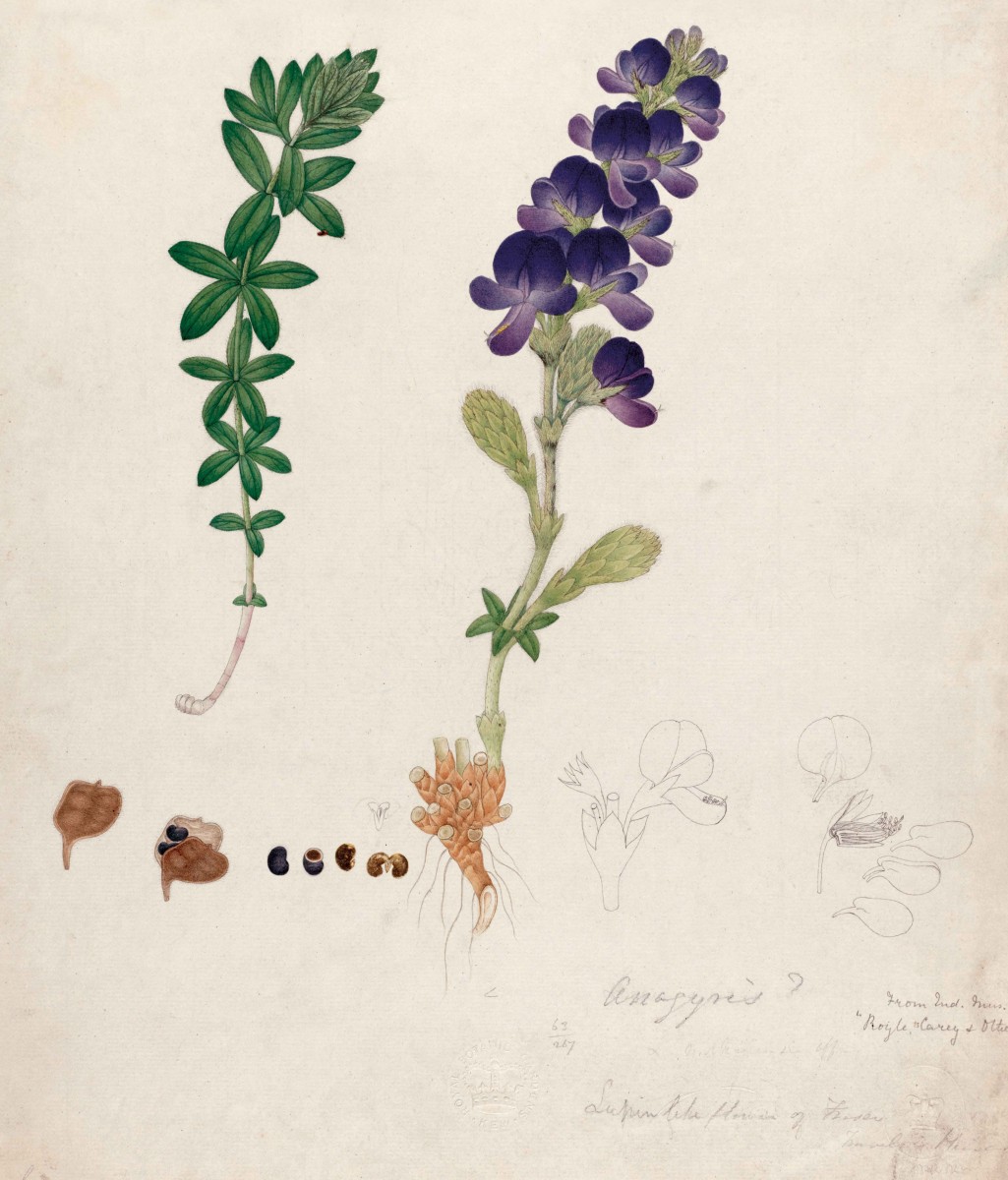 A lupin-like mountain plant with unusual purple-black flowers, found above 3,000 m. This is the original painting for the plate in Royle’s Illustrations of the Botany and Other Branches of the Natural History of the Himalayan Mountains, and of the Flora of Cashmere vol. 1: t. 47 (1839). 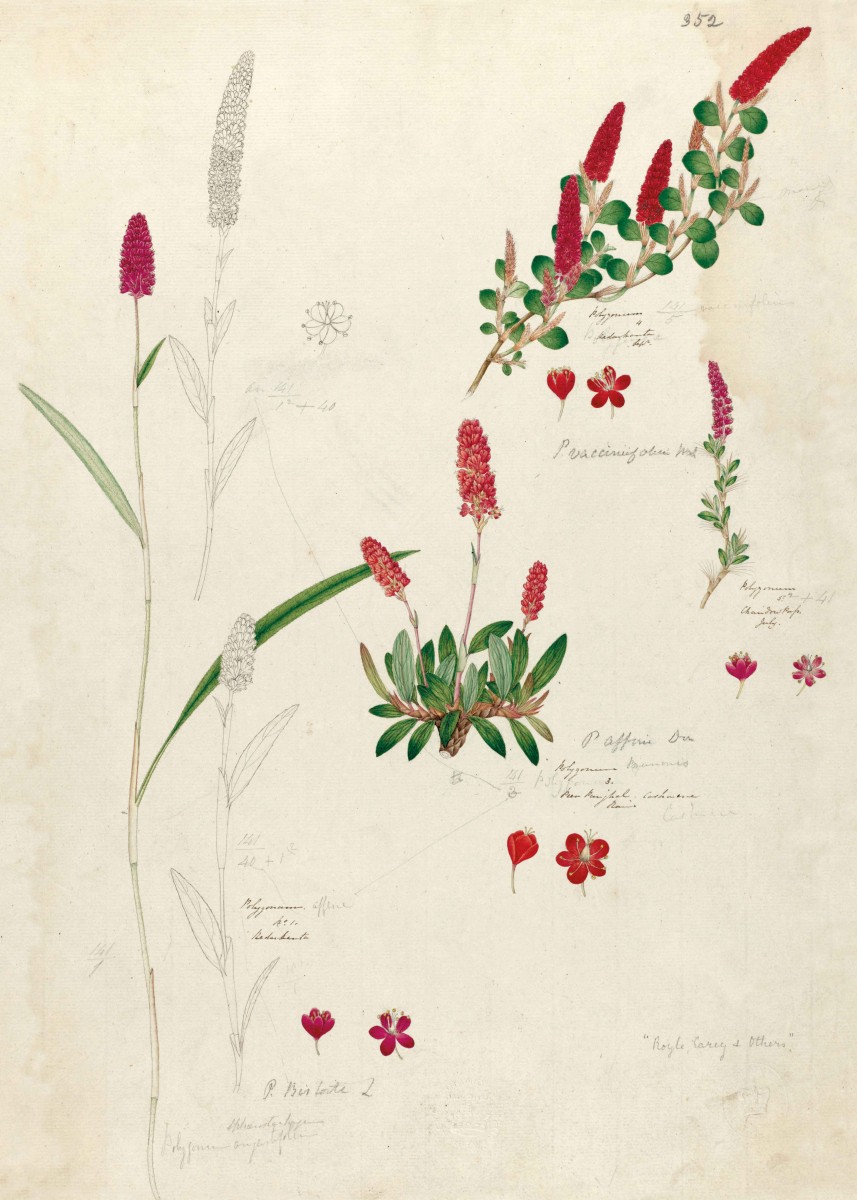 Both these are high mountain plants, usually growing above 3,000 m. 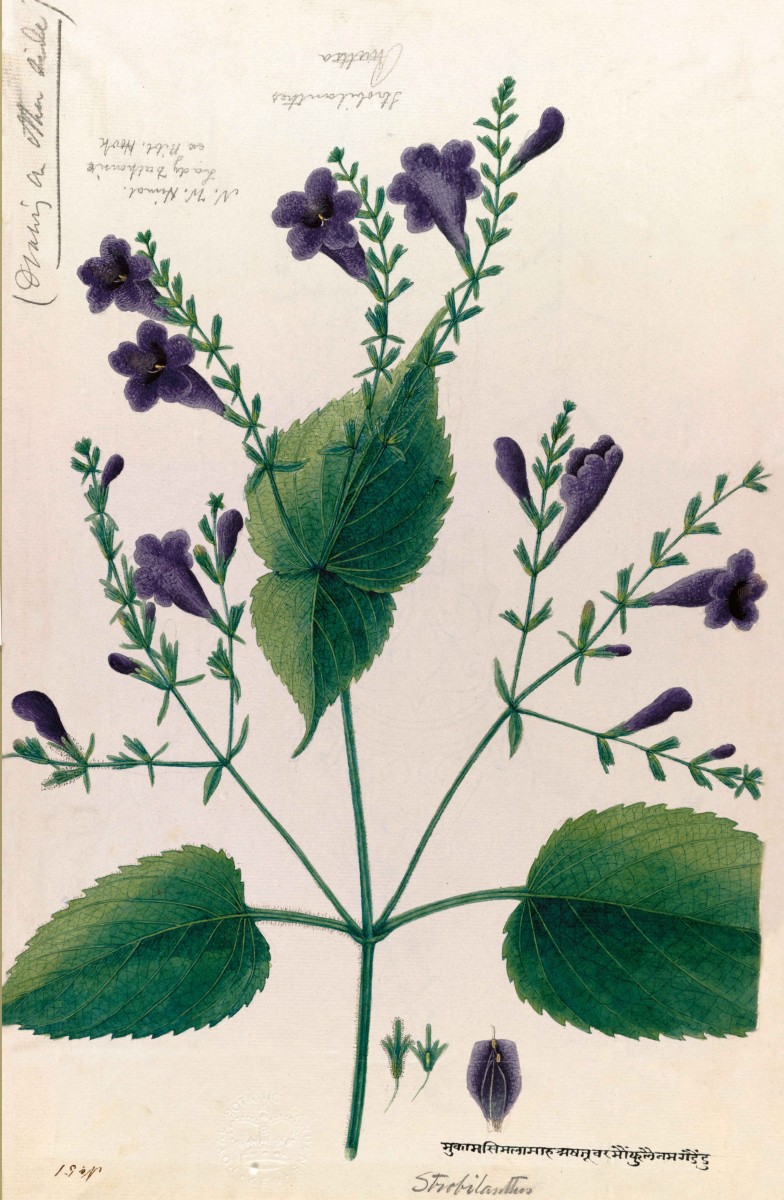 An autumn-flowering perennial, found wild in foothills of the western Himalaya from Afghanistan to Uttaranchal, and common in the forests around Simla. A related species S. cusia kuntze is used as an indigo dye in Assam and eastwards into Yunnan. 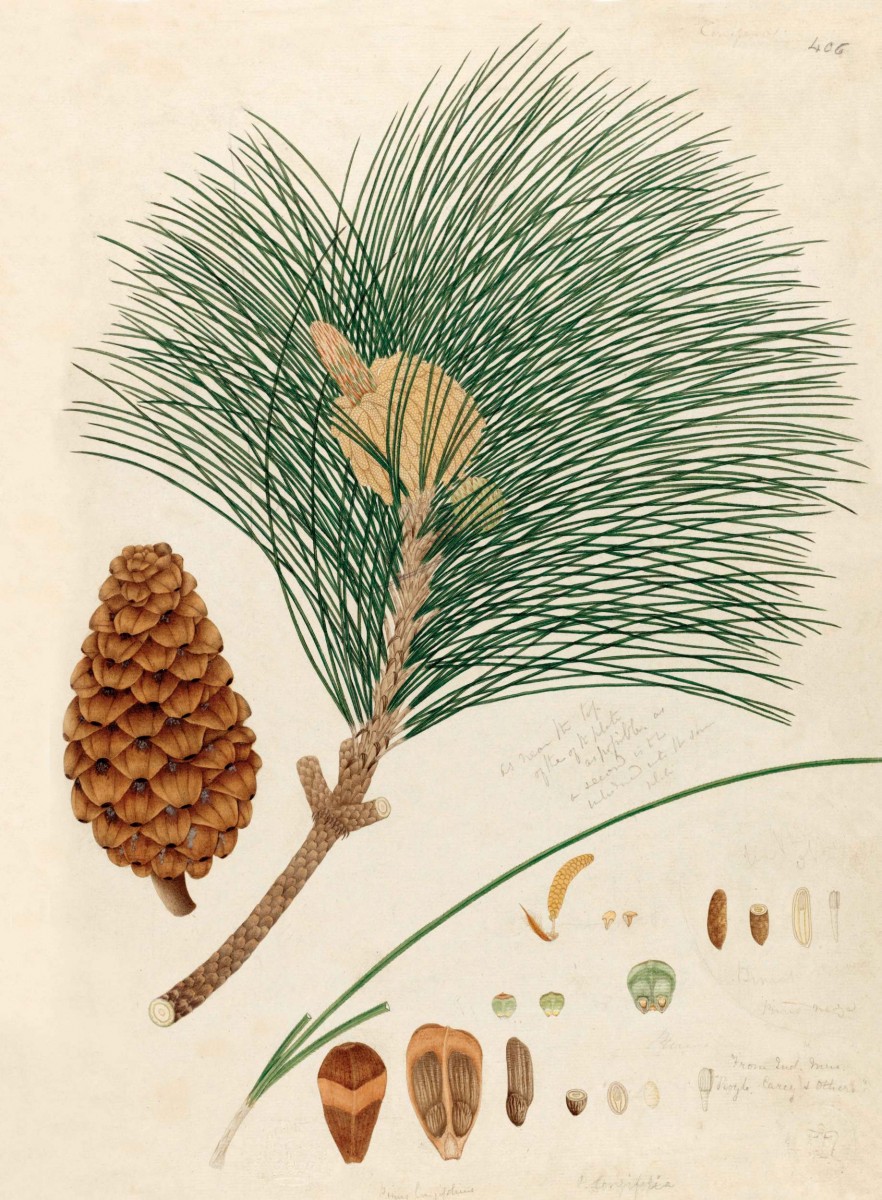 Chir pine is found in dry valleys at up to 2,000 m, from Afghanistan along the Himalaya to Burma. Trees can reach 30 m and the needles which are in threes can be 30 cm long, hanging down from the twigs. This is the original painting for the plate in Royle’s Illustrations of the Botany and Other Branches of the Natural History of the Himalayan Mountains, and of the Flora of Cashmere vol. 2: t. 85 (1839).

Martyn Rix is a renowned horticulturalist, author of many books and editor of Curtis’s Botanical Magazine. He is the recipient of the Veitch Memorial Medal from the Royal Horticultural Society for services to horticulture, and a Tercentary Bronze Medal from the Linnean Society.