Looking back at those two months at Auvers-Sur-Oise when apparent calm masked a soul in turmoil.

van Gogh without bear in September 1889. This may have been the last self-portrait by Vincent van Gogh. Photo: Yorck Project distributed by DIRECTMEDIA Publishing, Public Domain

In May 1889, realising that he needed urgent help with managing his disease, Vincent Van Gogh had turned himself in, voluntarily, at the asylum at St-Remy. During the first few months thereafter, he started feeling somewhat better too and was slowly allowed access to the hospital’s garden and to the grounds around it.

But it was much too brief a respite. Fresh attacks of what looked like epilepsy, followed by extended spells of manic depression and hallucinatory disorientation, began to soon supervene, and Vincent had once again to be shut away in his room and denied all freedom of movement. Besides, his treatment followed a rudimentary regimen of cold baths and soporifics and not much else.

Van Gogh’s heart sank as he at times watched some of the other inmates go completely out of their minds, or even drop dead without a warning. A particularly severe attack on February 22, 1890, dealt a fresh, crippling blow, and it took the artist much longer this time to emerge slowly from the abyss of darkness and exhaustion. Van Gogh made up his mind to leave St-Remy in search of a place where his chances of at least a partial recovery were not quite as dim, and where he would be free to work out-of-doors when he was not ill.

The place Van Gogh, in consultation with brother Theo – who in turn had been briefed by friend and fellow-painter Camille Pissaro – settled on was the little village of Auvers-Sur-Oise, built in terraces on a hillside between Pontoise and Valmondois, situated about 25 miles to the northwest of Paris. Charming Auvers, on the banks of river Oise, had been discovered some years previously by painters such as Daubigny, Corot and Daumier, and soon, Pissaro, Cezanne, Monet, Renoir and others too began visiting the village off and on.

Pissaro had a special reason to recommend Auvers to Theo: Auvers was where Dr Gachet, a general physician who was a painter himself and friends with many of France’s leading artists, also lived. Pissaro hoped Gachet would be able to take Van Gogh under his wing and keep an eye on his illness, too. Van Gogh was straining at the leash to get out of St-Remy and the south of France. In an impassioned letter of May 4, 1890, to Theo who was unsure if taking Vincent out of the asylum was advisable at that point, he pleaded with his brother to persuade the attending doctor at St-Remy to let him go quickly. Finally, on May 20, 1890, Van Gogh managed to reach Auvers, the last port of call in the journey of his cruelly short life. He shot himself with a gun on July 27 and succumbed to his injury two days later, on July 29, 1890.

But there was scarcely a hint of that terrible end when Vincent sat down to write to Theo soon after reaching Auvers on the lovely summer’s day. It was a short message, but it did not neglect to give Theo all the relevant information – about the village, about Vincent’s future lodging arrangements, and about Dr Gachet and what he seemed to think of Van Gogh’s health. And of course, it was accompanied by a painting, one Van Gogh called ‘Thatched Cottages’: 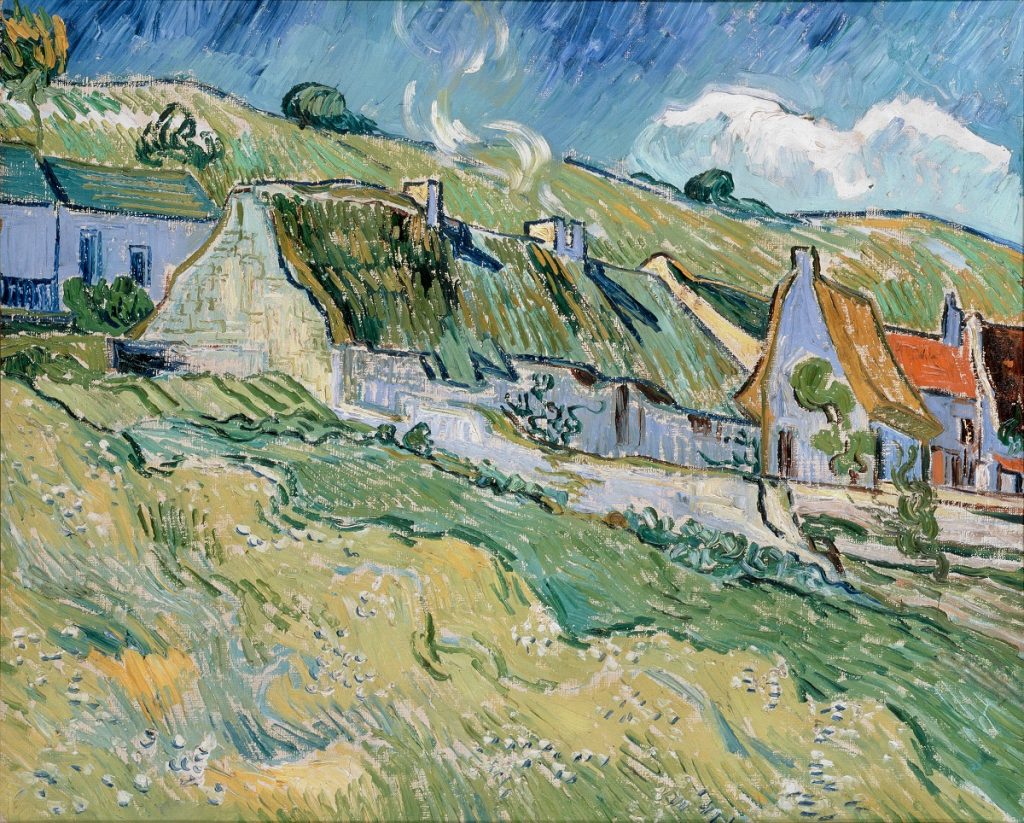 Auvers is very beautiful (the letter said), among other things a lot of old thatched roofs, which are getting rare… it is profoundly beautiful, it is the real country, characteristic and picturesque..

I have seen Dr Gachet, who gives me the impression of being rather eccentric, but his experience as a doctor must keep him balanced enough to combat the nervous trouble from which he certainly seems to me to be suffering, at least as seriously as I……

It didn’t take Van Gogh long to produce that portrait. Indeed, he made two of them, the first for the good doctor himself and the second, not an exact copy by any means, for his own collection. It is hard to say which one is better. Just a few days later, he was doing more portraits – of Gachet’s daughter, of Adeline Revoux and – this was either from memory or from an earlier sketch he had done while in Provence – one titled ‘The Little Arlesienne’. 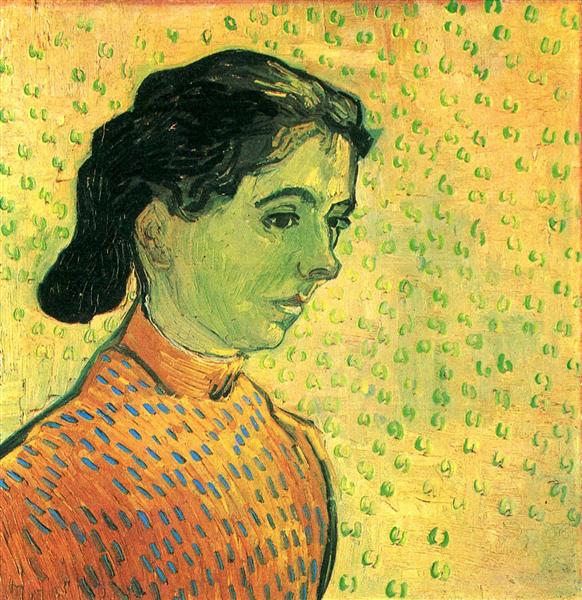 One of the most interesting stylistic adaptations of this period was Van Gogh’s increasing use of the double-square canvas measuring roughly 50 by 100 centimetres which he first discussed in his letter of June 24/25, 1889 to Theo (‘Then I have a canvas 40 inches long and only 20 inches high, of wheat fields….’). He used this format extensively over his two months at Auvers, creating (mainly) landscapes often done in muted colours and based on bold allocations of canvas space to darkness, to shade, or the absence of light. The tonal drama of such compositions is marvellously captured in the painting Van Gogh called ‘Landscape at Twilight’ that precisely balances lemons, pale greens and streaks of pink in the sky and the foreground even as the dark and the bright portions of the canvas seem to flow into and around each other.

The Auvers period saw a profusion of paintings created around the motif of wheat-fields and allied themes (eg, hay-stacks and cornflower). Indeed, between July 1 and 27 (the day Van Gogh shot himself), he did as many as 11 paintings around this motif, nearly all of them in the double-square format. Van Gogh mentioned them in his letter of July 10, 1890, to Theo:

“They are vast stretches of wheat under troubled skies, and I didn’t have to put myself put very much in order to express sadness and extreme loneliness.”

Here are two of the most important canvases from that category, titled ‘Wheatfield under Thundeclouds’ and ‘Wheatfield with Crows’ respectively.

The rolling, turbulent momentum running through the sky in the second canvas, along with the line of black angular birds hovering over the golden corn, heighten the emotional drama of this remarkable painting, leading many people to believe this was Van Gogh’s last work before he killed himself. Internal evidence does not, however, support this view, pointing instead to canvases like ‘Tree Roots and Trunks’ and ‘Daubigny’s Garden’ as likelier candidates for the terminal slot on the Auvers gallery.

Indeed, the melancholic light blanketing this painting is not without precedent in Van Gogh’s work in Auvers, if we consider the darkly monumental canvas titled ‘The Church at Auvers’ which was painted in June, within Van Gogh’s first month in the village. The storm clouds, then, may have been gathering overhead all through these two months, at times unknown to Van Gogh himself, while at other times he had a vague, but no less debilitating, sense of their potency. 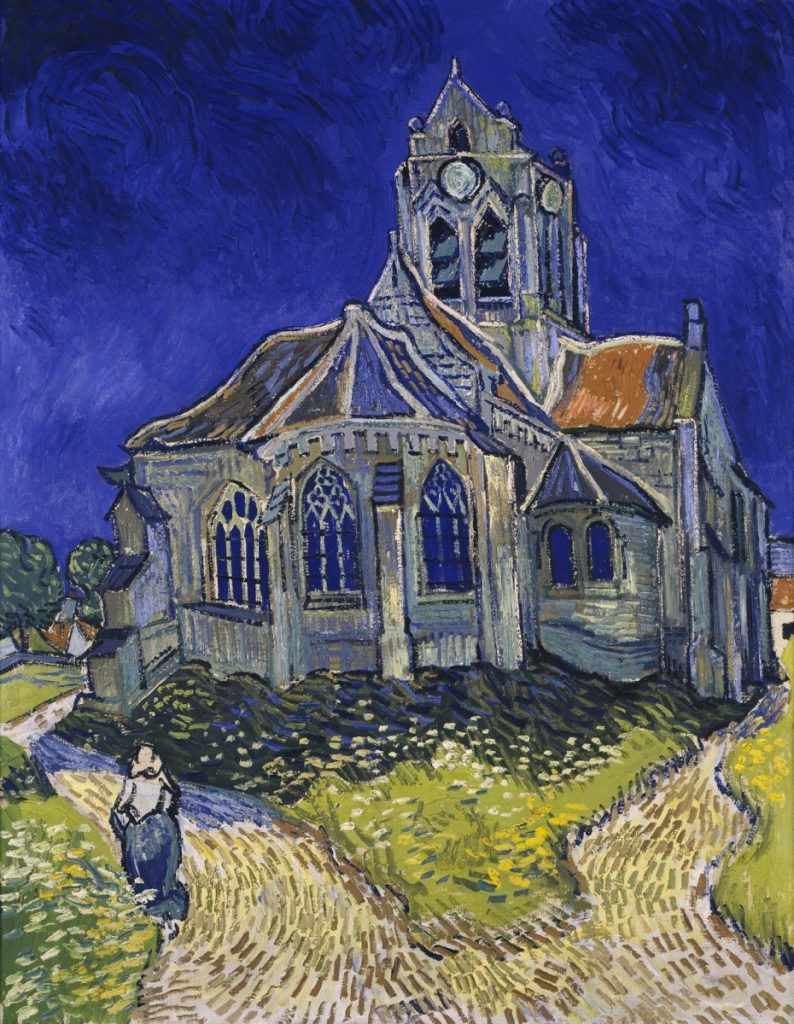 The proximate reason why Van Gogh chose to end his life when he did has never been known for certain, though the many anxieties that were weighing him down and the bitter disappointments that were gnawing at his heart were never in doubt. In a letter to his brother, written probably on July 24 but never actually posted (and eventually retrieved from the jacket he was wearing when he died in the morning of July 29, 1890), Van Gogh did not, however, wish to revisit any of those crushing heartbreaks or anxieties. Instead, he recorded this extraordinary bit of insight, of self-knowledge, in that unsent letter, withheld no doubt out of consideration for his dear brother’s sensitivities :

“Well, I have risked my life for my work, and it has cost me half my reason…”

But Van Gogh was palpably wrong: no part of his reason had been lost, though he had perhaps despaired of his power to ride out the storms that loomed ahead.