The Changing Climate in the Songs of the Brahmaputra

As the mighty river flows, so does the natural music of the pain of environmental change. 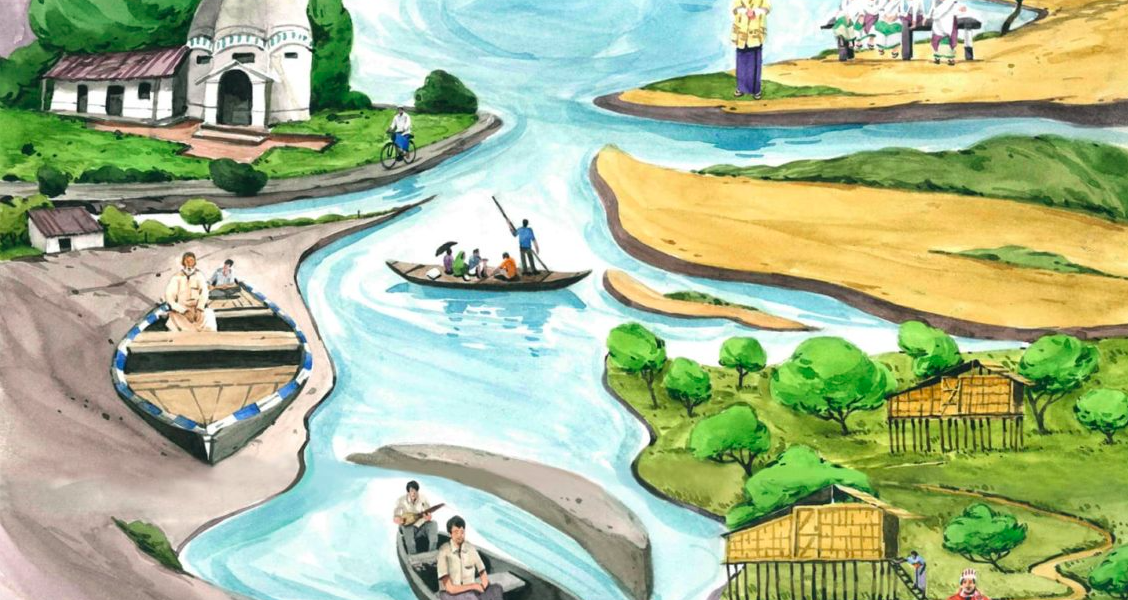 Many popular singers have responded to the climate crisis – Billie Eilish with All the Good Girls Go to Hell, Kelly Lee Owens with Melt!, Anohni with 4 Degrees, to name a few.

In Assam, in northeast India, local singers are also voicing the pain of the changing climate in their music. The Third Pole travelled through the state to record songs along the Brahmaputra river.

Assam is extremely vulnerable to climate change. Much of the state is in the basin of the Brahmaputra, a river that has changed its depth and width many times in history. Now the floods have worsened due to climate change, while erosion has increased because the river no longer carries as much silt as before – the silt is being trapped in dams upstream.

All this has come on top of the 8.7-magnitude earthquake in 1950 that changed the topography of the region. It started a massive displacement of people from the riverbanks, a process that is accelerating now. Many have used songs to describe the pain of losing homes and livelihoods along the Brahmaputra river.

Song of the displaced

The opening lyrics of 72-year-old Moinul Bhuyan’s song refer to an issue that affects all people in this area irrespective of religion. Bhuyan’s song is about his village Tarabari, which was washed away by the Brahmaputra river after the earthquake.

“Tarabari was a big business hub before the 1950s, a traditional dockyard,” recalled Bhuyan. “Big ships used to come and halt there for trade and commerce. We used to trade jute from there.”

Tarabari was in what is now Barpeta district of Assam. It had schools and a college, a library, a hospital, temples and mosques, a police station and playgrounds. All this has been washed away and its people scattered across the state and beyond.

Musharraf Khan, another former resident, now teaches at an Islamic seminary in Barpeta. “I don’t think I would have had to work in a small school if the river had not eroded our land,” he said.

Song of the Mising

The Mising, an indigenous people, have been living along the Brahmaputra for as long as they can remember. With a population of around 700,000, they are known as the “river people”. Over centuries, they have learnt to live with floods, and build their huts on stilts. The huts are made of bamboo and can be rebuilt easily if necessary. But now their problem is that the land is eroding from under their feet.

Many of the Mising live in Majuli, an island on the Brahmaputra that is being eroded almost constantly. Nilamoni Ngatey, 55, described how his relatives and neighbours had to move to the mainland as the river ate away their farms.

“We saw gales, heavy rain, floods. Our grandparents used to protect us during those times. We were still afraid. Those horrible scenes remain fresh in our minds.” His song is all about the relationship between floods and people along the Brahmaputra river.

Like the Mising, people of the Deori – another indigenous community – remember losing an entire clan to floods. Indian Deori, 45, said: “We migrated from Sadia due to the floods. Deoris have different clans. In the migration one clan was totally lost.”

He sings a love song comparing the pain of losing a beloved to what flood and erosion does to a human soul.

The people from Yunnan

Centuries ago, the Tai Phake people moved from Yunnan in China to Naharkatia in eastern Assam. The state’s only Buddhist community, they live beside the Burhi Dihing river, one of the major tributaries of the Brahmaputra. Due to erosion the river is just about to reach the walls of their ancient monastery in Nam Phake village.

Am Chaw ChaKhap, a resident in her 60s, said the Tai Phake people were ethnically Thai, and had moved to India because the land was so fertile. She remembered: “We have seen bad times when the river washed away a part of our village. Now the river is shifting and we can see silt here. We are also indebted towards the river in many ways. It’s part of our culture, though a lot of people have migrated from our village due to flood and erosion.”

In the 19th century, the British moved people from all over India to Assam to work in tea gardens. The workers have assimilated over time into a community called the Tea Tribe.

Bhadra Rajwar, a community leader, lives in Nazira near Dikhow river, another tributary of the Brahmaputra. He sings of climate change; of how some tea garden workers wanted to farm, only to see their farms washed away by floods. They lost their land, and stayed saddled with debt, as they had borrowed to take their farms on lease.

“A lot of tea gardens also got eroded by the river,” Rajwar added. “It’s a huge loss for the community.”

Khagen Sanyasi, 55, a regular singer in Bengali on the local radio station, sang of the way “climate change and unpredictable floods have made people poorer”.

A resident of Bhuragaon, a small village in Morigaon district about 100 km east of state capital Guwahati, Sanyasi said the land his family used to own is now under water.

“This is a mad river, every year it plans to make us poorer,” he said. In his song, Sanyasi blames the Brahmaputra for all his miseries, listing the affected areas he has seen.

All illustrations in the original piece: Vipin Sketchplore

This article was originally published on The Third Pole under a Creative Commons licence.