Between March 1 and April 21, 2021, more than 519,000 individual accounts actively engaged with SOS and emergency tweets from other Indian users to help provide relevant information or medical aid. 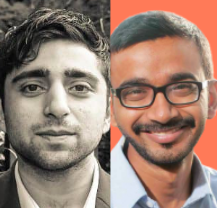 Following a sharp spike in new COVID-19 cases, India is currently in the midst of an unprecedented public health emergency. The country’s medical and bureaucratic infrastructure has been stretched thin following an exponential increase in active COVID-19 cases from mid-March 2021 onwards, culminating in an acute shortage of hospital beds, plasma donations, and oxygen cylinders throughout the country.

As government sources of medical aid and welfare collapsed around them, many Indians took to Twitter, sending emergency SOS requests in a desperate attempt to crowdsource vital resources for their families and friends.

In response to their compatriots’ pleas for assistance on the platform, hundreds of thousands of ordinary Indian users rose to the fore, mobilising into decentralised support networks and helping others by compiling relevant information into lists and sourcing medical supplies chiefly through conversations on the social media platform.

In India, a combination of lax public restrictions following a prior drop in active cases, the emergence of a new variant of the COVID-19 strain, and the resumption of “super-spreader” gatherings such as the Kumbh Mela in Uttarakhand and political campaigning in Assam, Kerala, Tamil Nadu, Puducherry, and West Bengal are all postulated as key factors behind the resurgence of the virus. 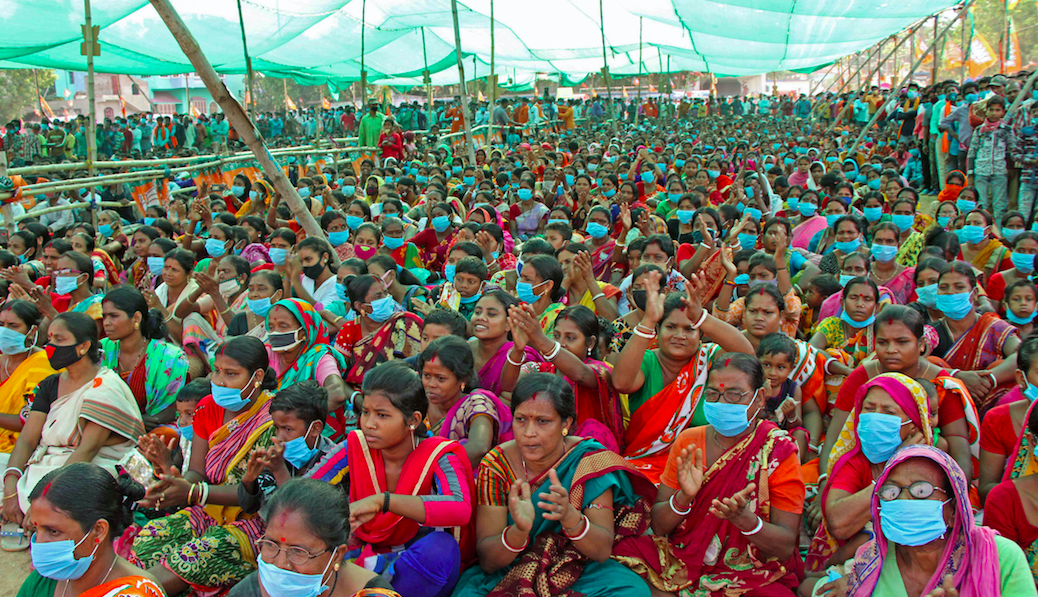 Several local and international outlets published articles highlighting how after a brief sustained dip in active cases between October 2020 and March 2021, the country has witnessed an unprecedented spike in active cases increasing from 168,627 on March 1, 2021, to 3,084,814 cases as of April 29, 2021. Other outlets drew attention to the horrific procession of videos, images, and messages emanating from social media users as the country’s public and private health infrastructure was pushed beyond the brink under the unrelenting caseload.

Faced with mounting shortages of critical medical supplies and unresponsive government helplines, patients, medical practitioners and in many cases, even hospital staff took to Twitter to crowdsource supplies from a decentralised network of vendors, NGOs and concerned citizens who stepped in to address the growing deficit. Other users compiled open-source lists of helpful resources like civil society helplines, telephone numbers of local volunteers, and crowdsourced updates on the availability of hospital beds, oxygen cylinders, and plasma donations in their area. Some users went further and mobilised to prepare home-cooked meals for COVID-19 patients under home quarantine. 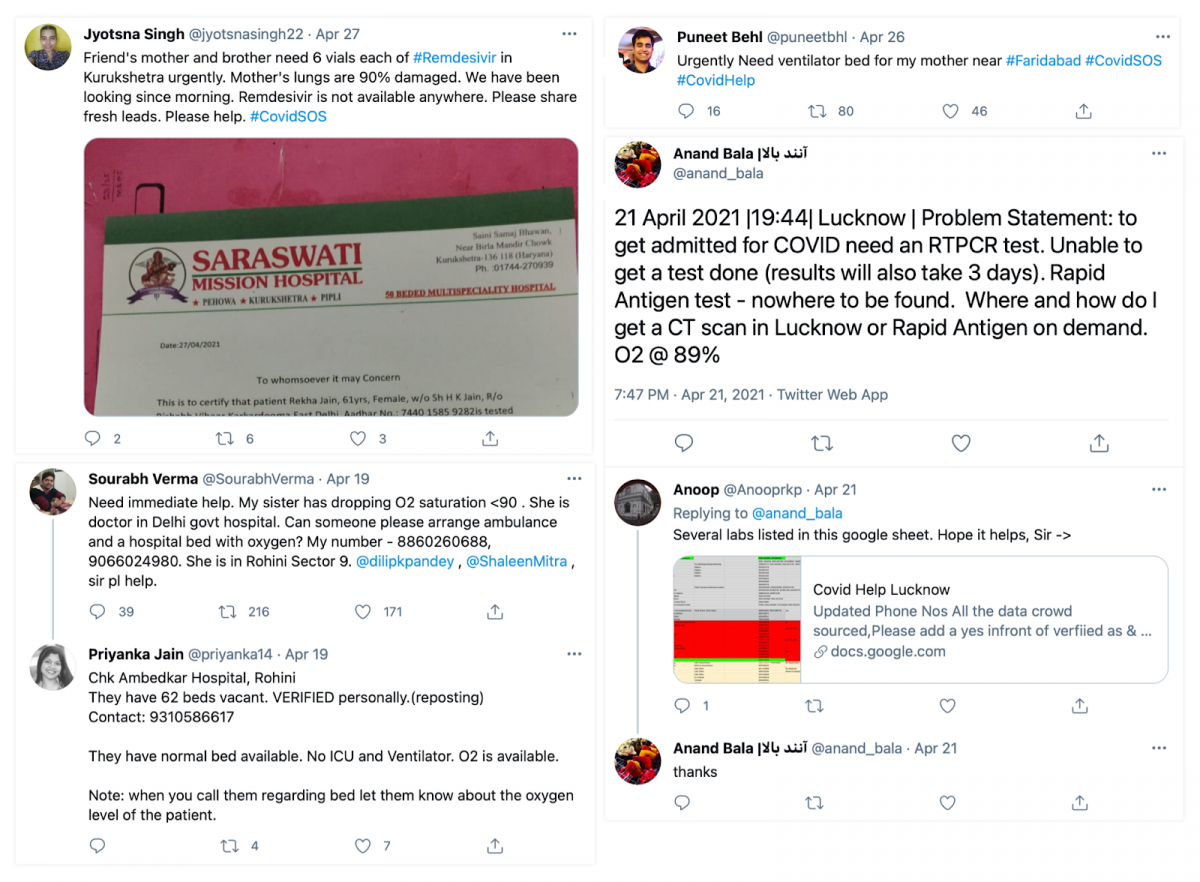 Using Twint, an open-source intelligence tool, the on-platform activity of SOS tweets by Indian users was analysed between March 1, 2021 and  April 21, 2021. A custom rule was fed into the OSINT tool to extract the relevant SOS tweets on the platform between the examined time frame.

The rule employed a combination of more than 20 keywords related to the most common medical resources (oxygen, plasma donation, hospital bed) requested by users on the platform, paired with multiple combinations of verbs and synonyms associated with assistance (help, require, needed) to filter out the relevant SOS tweets.

This query yielded 81.63 million tweets from users directly asking for help, or responding with a relevant link, list, or contact over the same time frame. 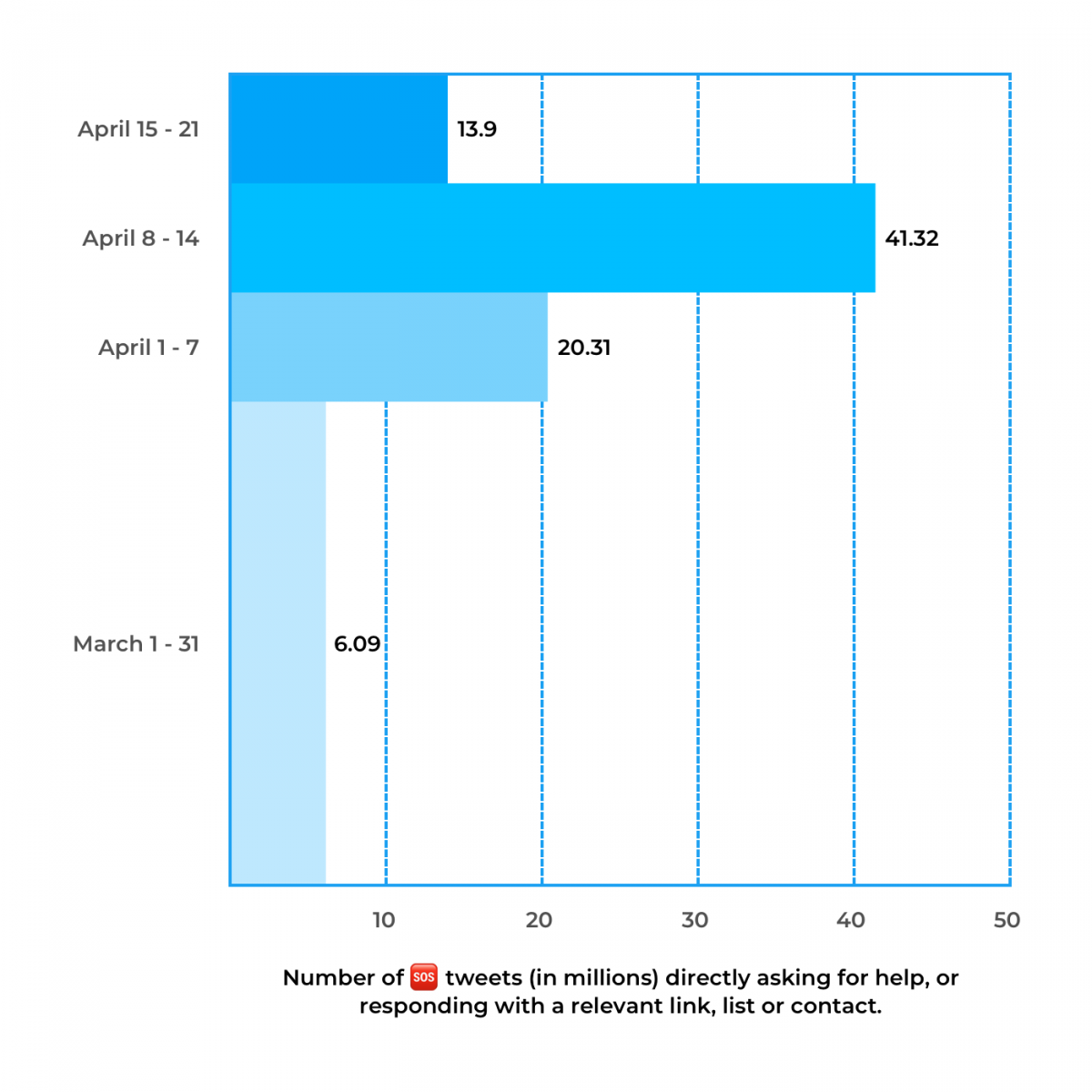 In comparison to the six million SOS messages recorded over the entire month of March 2021, the number of SOS messages increased by over sevenfold to 41 million tweets between April 8 and April 14, 2021, providing some indication of the severity of the public health crisis. On April 8, India registered the then-highest single-day increase in the number of new infections since the beginning of the pandemic, with 131,787 cases reported across the country. 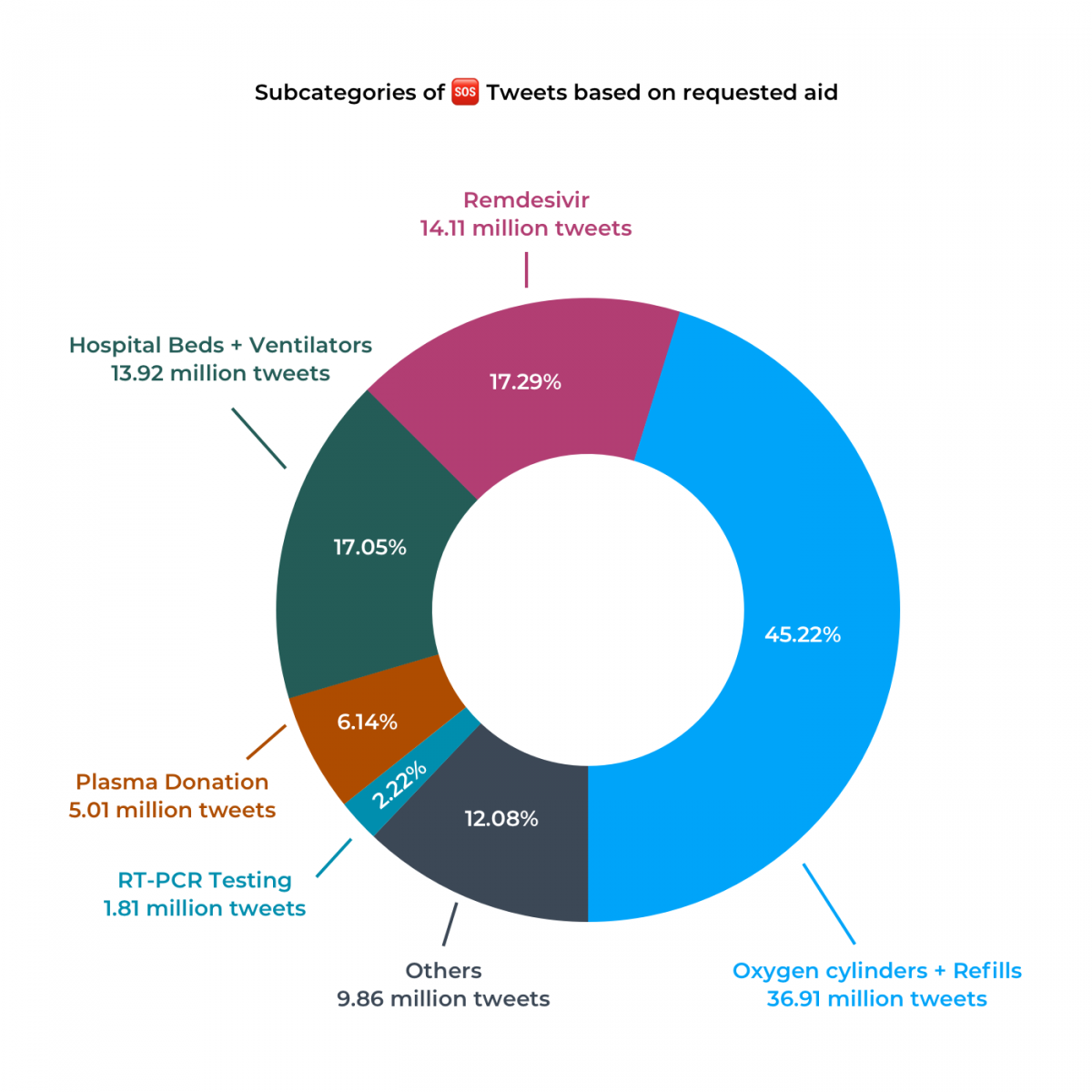 On April 19, The Wire published a piece highlighting an investigation by Scroll.in into the inefficient implementation of a central government directive leading to only 11 of more than 150 planned oxygen generation plants being constructed, with only five of these being currently operational. Shortly after, The Indian Express reported on the crippling shortage in supplies of oxygen cylinders across several states in the country.  The high incidence of SOS tweets requesting oxygen cylinders and their refills reflected this reality.

Surprisingly, the number of SOS tweets requesting and responding to queries related to Remdesivir were significantly higher than requests for hospital beds, ventilators, or vaccines, despite its unproven ability to lower mortality rates or the length of hospital stays.

The SOS dataset was also filtered to draw out the Twitter accounts most tagged by Indian users in their SOS tweets. The top five accounts included a mix of politicians, comedians, and Bollywood actors. At the top was Srinivas B.V., the national president of the Indian Youth Congress, who was tagged in 88,321 SOS tweets from Indian users. The second and third most tagged Twitter users were Dilip Pandey, a member of the legislative assembly with the Aam Aadmi Party, and Sonu Sood, a Bollywood actor well known for assisting migrants during the first wave of COVID-19, with 74,492 tweets and 71,969 tagged tweets respectively. This was followed by stand-up comic and writer Varun Grover, and actor Vineet Kumar Singh. 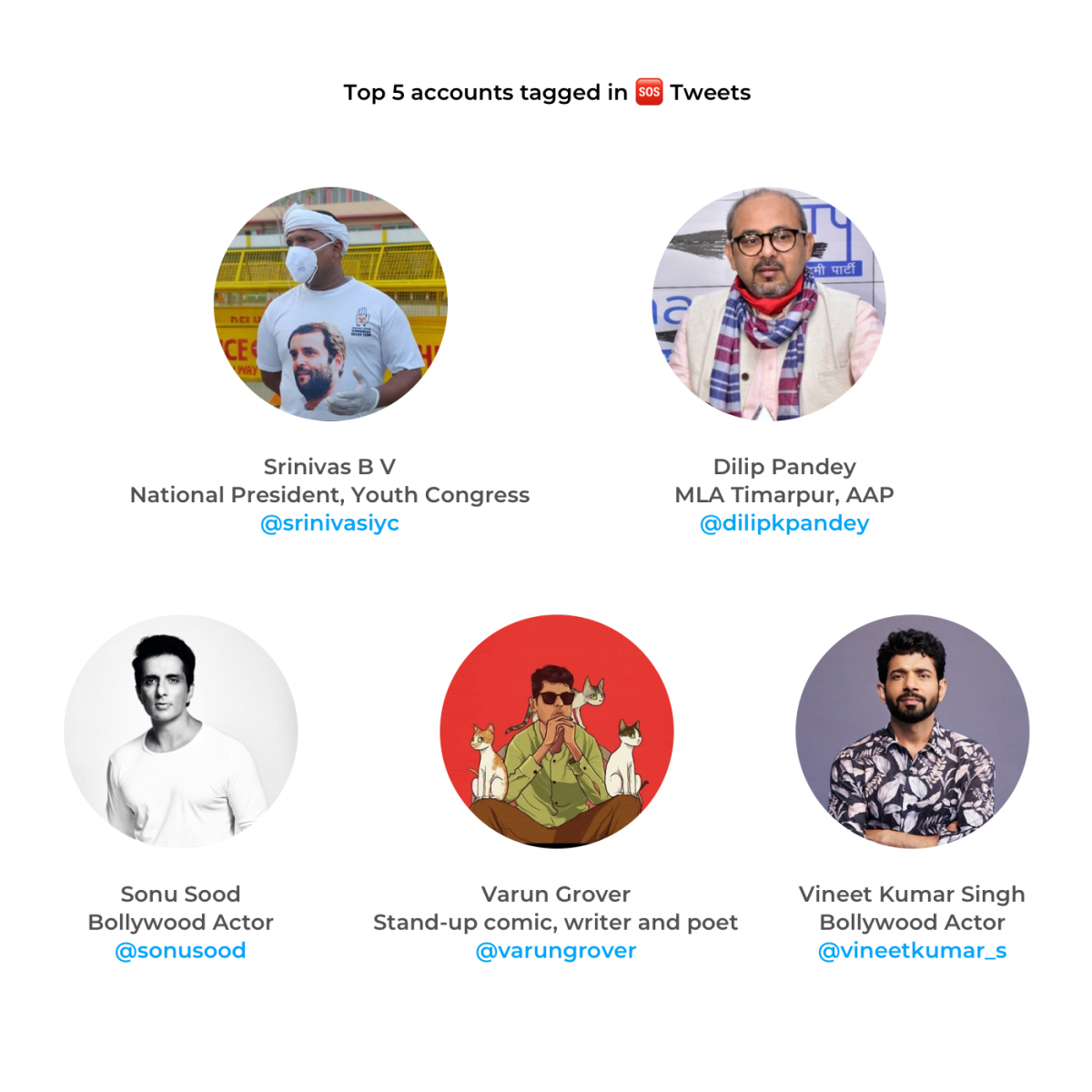 To understand the geospatial distribution of these messages across the country, the SOS tweets were categorised based on the cities where the assistance was requested.

The data showed that the Delhi National Capital Region (NCR) saw the highest number of requests for assistance, with 39.86 million SOS tweets from Indian users on the platform. The area comprising the cities Lucknow, Varanasi, and Kanpur was in second place, with a combined 19.45 million tweets, followed by Ahmedabad, Surat, and Rajkot registering a combined 12.23 million tweets over the examined period.

It is important to note, however, that despite being one of the most popular social media platforms in the country, with an estimated 17.5 million users, in absolute terms, this user base represents just 1% of the country’s population. This digital divide is reflected in the hotspots, as many cities with less internet connectivity and fewer healthcare resources but higher caseloads are absent from the dataset. 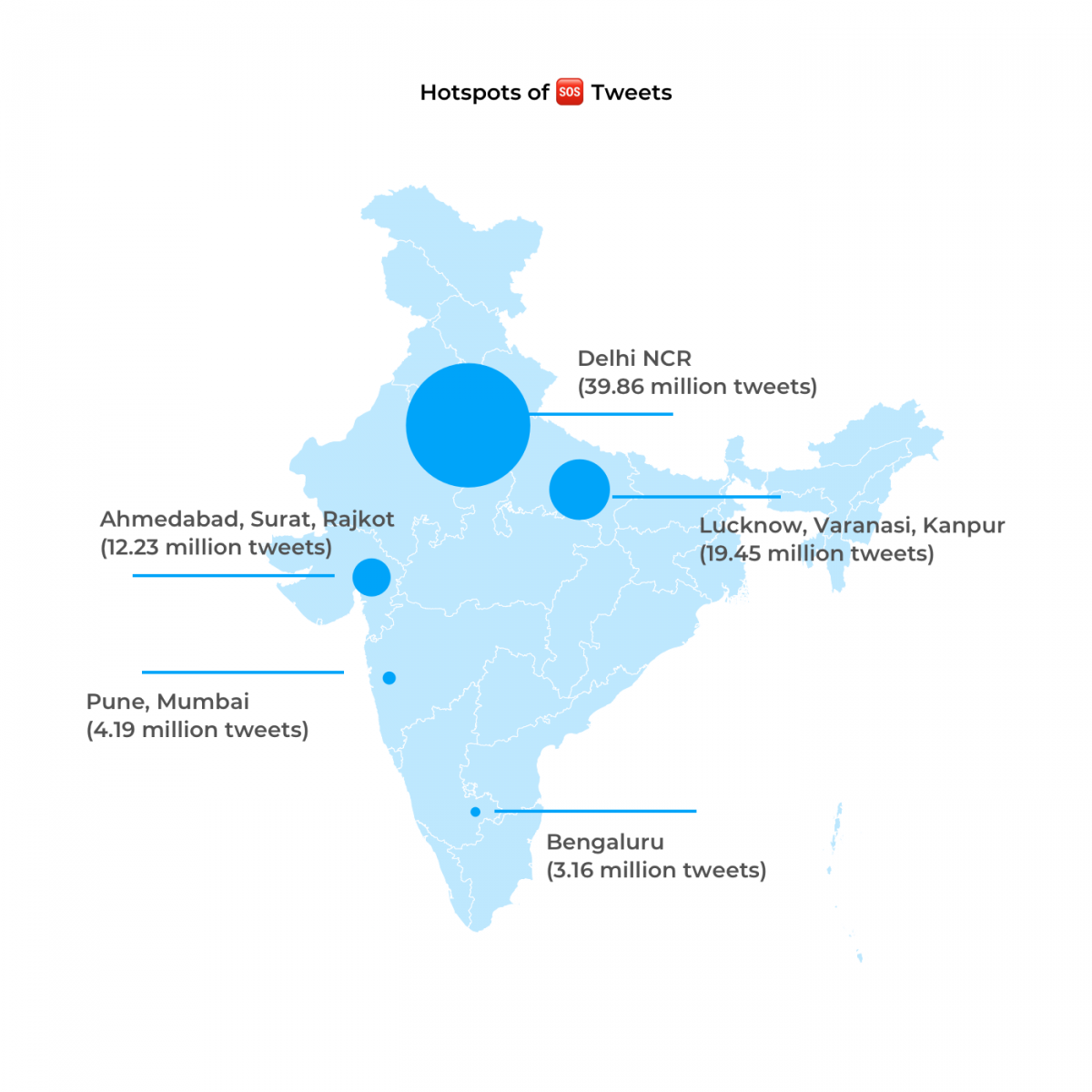 Finally, the dataset was parsed to calculate the number of unique accounts that were driving the conversations around SOS tweets on the platform. Between March 1 and April 21, 2021, more than 519,000 individual accounts actively engaged with SOS and emergency tweets from other Indian users to help provide relevant information or medical aid. Over three-quarters of these accounts (356,000) belonged to ordinary citizens lacking official Twitter verification or large followings on the platform. The engagement of ordinary Indian citizens far outweighed that of prominent social media influencers as well as other public figures in media and government.

Notably, this decentralised web of citizen-support networks continues to engage on the platform despite having multiple SOS tweets taken down by Twitter following directives from the Indian government. Following growing attempts by local police and state government officials to intimidate and even criminally charge users posting SOS tweets on the platform, the future of Indian SOS Twitter appears uncertain.

However, a silver lining is the selflessness exhibited by countless Indian Twitter users, which serves as a much-needed reminder of how individuals can band together to help each other through a national crisis. This analysis of the on-platform activity of Indian users through the country’s second COVID-19 wave also provides a case study of the immense potential of social media to enable societal resilience by giving ordinary citizens a platform to instantaneously communicate, organise, and provide for each other in moments of collective adversity.

Ayushman Kaul is a Research Assistant, South Asia, with the Digital Forensic Research Lab. Devesh Kumar is an independent data analyst and Senior Data Visualizer with The Wire.