Ayyub's tweet, which is not available to be viewed within India, was her response to a lower court allowing a survey of the Gyanvapi Mosque in Varanasi

New Delhi: Twitter on Sunday, June 26 blocked access to various tweets and accounts, including a few relating to the farmer protests of 2021 and the recent controversy surrounding the Gyanvapi mosque.

Journalist Rana Ayyub tweeted an image of a ‘notice of withholding’ sent by Twitter to her late on Sunday.

In the email sent to her by the company, the social media giant notes that her “account” is being withheld in India under the “the country’s Information Technology Act, 2020.”

Despite this wording, the email itself appears to indicate that a single tweet (linked in the email) and not the whole account is being withheld. While the tweet is not available to view within India, it is still accessible to Twitter users around the world.

Ayyub’s withheld tweet —  dated April 9, 2021, a screenshot of which is shown below — was a response to a lower court allowing a survey of the Gyanvapi Mosque in Varanasi. The journalist was reacting to the dispute around the mosque, which is adjacent to a temple, and had labelled the court’s decision as having set “the stage for demolition of yet another mosque,” in reference to the Babri Masjid’s demolition in Ayodhya over similar claims. 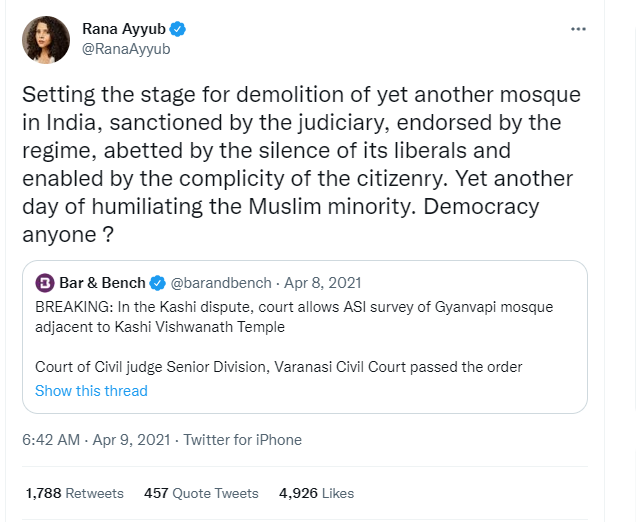 The tweet that has been censored in India alone. Credit: The Wire.

Ayyub’s Twitter account still appeared to be visible at the time of publishing this report. Former Prasar Bharati CEO Shashi Shekhar Vempati also tweeted that Twitter’s email to Ayyub could be a “delayed reaction to past incidents” and added that he had recieved a similar notice for over a tweet on the farmer protests last year.

Including an account withheld in India message from @Twitter @TwitterIndia. Perhaps the “celebrity Islamophobia Activist” can pipe down and stop claiming victimhood. pic.twitter.com/lq4497ock9

Twitter also appears to have withheld two accounts associated with the yearlong farmers’ protests against the now-repealed agricultural laws, @Tractor2twitr and @Kisanektamorcha.

It's result of too much democracy In India. Both @Tractor2twitr & @Kisanektamorcha accounts have been withheld by @narendramodi government because we are continuously fighting for our rights.

In February 2021, during the farmers’ protests on Delhi’s borders, a slew of Twitter accounts – belonging to individuals, groups and media organisations – were withheld by Twitter site for a few hours in response to legal demands. The only common thread connecting these accounts was that nearly all of them had been posting updates and opinions on the farmers’ protests regularly.

A day ago, murdered singer Sidhu Moosewala’s song, ‘SYL’ was deleted from his official YouTube channel in response to a “due to a legal complaint from the government,” the website said.