From 2016 to 2020, Growing Use of ‘Anti-National’ in Political Discourse on Indian Twitter

The most dramatic increase in the use of ‘anti-national’ happens in 2019 starting with the dilution of Article 370, and peaking thereafter during the CAA protests. Recent references to the farmers’ protests as “anti-national”, including by major political actors, raises questions of how the term has been used. Much recent work has considered ways in which the notion of being anti-national has been attached to various forms of dissent, but also in general as part of an overall increase in polarisation in the Indian political environment.

The term “anti-national”, used typically to suggest seditiousness in the object of the slur, is increasingly used by political parties against each other, and against individuals whose positions they are at odds with.

We examined the use of the term ‘anti-national’ and its various synonyms and derivatives by politicians across parties and states in India between 2016 and 2020 and present the results here. In particular, we used a database of tweets from about 37,000 Indian politicians, public figures, journalists and media houses from the NivaDuck database. We considered the time period from January 1, 2016 to December 17, 2020, and used variants of the term anti-national either in text or as hashtags, using a substring match (anti-national”, “anti national”, “antinational”, “anti_national”).

For Hindi, we used देशद्रोही, and its substring variants as matches. We did not include direct translation for synonyms in other languages. This method is very conservative and excludes various other messages that may include the sentiment, but not the precise terminology, but for our purposes it gives higher precision despite lower recall, and thereby gives us a sense of how the term’s usage has expanded among public figures. For our purposes, we do not look at the explicit use of these terms among casual Twitter users; however, our retweet analyses do offer some sense into how the general public reacts to these terms.

We found approximately 100,000 tweets that were either tweets or retweets, of these. About 37,000 were original tweets. Within this sample, the single largest language represented was Hindi, with about 20,000 tweets, followed by English, with about 9,000 tweets, and all other regional languages comprising the rest. The non-English tweets were counted primarily for the use of hashtags using Roman script. Importantly, we see that counter to notions that the term is used largely by the ruling party against its detractors, the use of “anti-national” is seen across parties, but with subtle differences.

Bharatiya Janata Party (BJP) politicians use the term more than all the other major parties, in terms of total scale. This is in part because BJP politicians are most numerous on social media, but the BJP also leads in terms of the percent share of total tweets that have the term in it. It should be noted that the specific term itself only shows up in 0.1% of all tweets, but since this methodology focuses on the specific terminology, the number as a share of the whole is expectedly small. The interesting difference in patterns of use is that while BJP politicians use the term to refer to various individuals and causes, in addition to parties, the other parties, when using anti-national almost exclusively use it in reference to the BJP itself.

We see in Figure 3, for instance, that while both the BJP and INC attack each other using ‘anti-national’, the INC focuses on the party, the RSS and a few key leaders including Narendra Modi, Sambit Patra and Amit Shah, or uses terms to target the BJP.

The BJP goes after the INC, AAP and also the entire opposition (such as the trending of the hashtag #UnitedAntiNationalsAtBrigade, referring to a group of non-BJP leaders who met in Bengal in early 2019). 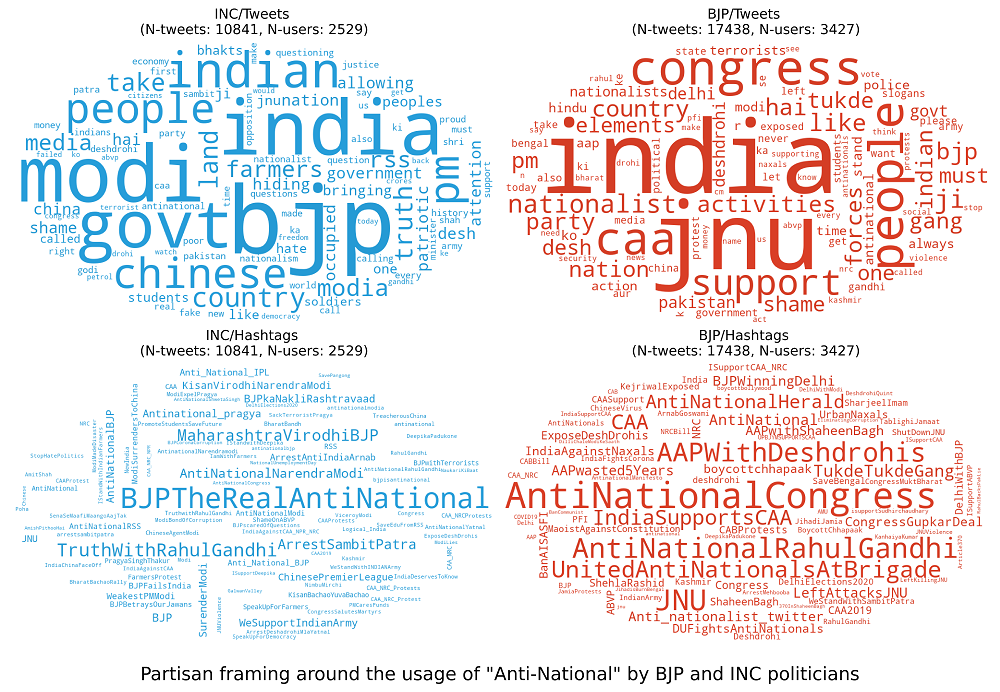 For the BJP, however, the most-used term is not the name of another party, but rather JNU, referring to the Jawaharlal Nehru University, and the top issue on the BJP side was the Citizenship (Amendment) Act, whereas for the INC it was related to the Chinese incursion into Ladakh in 2020. The BJP also uses terms such as ‘tukde tukde’ and ‘terrorist’ much more than the INC. Both parties use “shame” as the major emotion verb in messaging about ‘anti-nationals’. The INC uses ‘truth’ as a value adjective much more than the BJP.

Comparing the INC and the BJP, we see a pattern of peaks marking the points when parties talk about ‘anti-nationals’. In Figure 4 below (log scaled) we see that the first peak of conversation was around the 2016 JNU sedition row, but that consistently, the two parties tend to talk about the subject of anti-nationals roughly around the same time, although the target of the tweeting differs. The first instance where BJP uses ‘anti-national’ much more than the INC was in late 2016 when BJP leaders targeted the Aam Aadmi Party for asking for proof of the ‘surgical strikes’ that were announced in September 2016. Here, ‘anti-national’ was largely used against those who questioned the official version of events, including specifically calling Arvind Kejriwal a ‘traitor’.

We see that the most dramatic increase in the use of ‘anti-national’ happens in 2019 starting with the dilution of Article 370, and peaking thereafter during the CAA protests. However, it is important that post-2019, there is a new and more consistent use of ‘anti-national’ on major issues that gather traffic on social media. Thus both the Ram Mandir inauguration and the farmers’ protests in Delhi saw more instances of politicians referring to people as ‘anti-national’ than for instance the aftermath of the Pulwama attack.

There are differences between who is targeted by tweets mentioning anti-nationals. While the majority of targeting is aimed at politicians or journalists, there are a number of citizens in various forms of public life who have been targeted as anti-nationals. Most targeting takes place within the text of the tweets while separate hashtags are created to target individuals only when there is a coordinated attempt to attack. Such targeted attacks tend to be issue-based, examples include attacks on Dalit rights activists Dilip Mandal or Jignesh Mevani, on Kashmiris like Shehla Rashid or Mehbooba Mufti, on industrialist families including Adanis and Ambanis, on figures or issues associated with the Hindu-right politics including Nathuram Godse and Vinayak Savarkar, and with issues or individuals associated with Muslims, including Tipu Sultan and the Mughals.

Individuals can be targeted or simply co-mentioned in a tweet. The handle of the Ministry of Home Affairs or of law enforcement handles such as city police handles or chief ministers’ offices are often mentioned in ‘anti-national’ tweets with the intention of “bringing to the attention” to institutions of power individuals who are being targeted.

Table 1: Most mentioned politicians (by other politicians) in tweets including the text ‘anti-national’ between 2016 and 2020

We see an important pattern in Table 1 above — that getting mentioned in a tweet about ‘anti-national’ does not correspond to the use of the terminology. We see for instance that Narendra Modi and Arvind Kejriwal have never used the exact term in tweets, while Rahul Gandhi and Yogi Adityanath, each of whom have sent at least one widely viral tweet with that wording, have both used the term just once each. The only co-mentioned politicians who also use the term significantly are Sambit Patra and Kapil Mishra. Importantly, for almost all these politicians, when they do tweet with the term ‘anti-national’ in their tweet, they get significantly more retweeted for those tweets than their typical other tweets (median retweet count). In fact, as we see in Figure 6, this is a generally reliable pattern across politicians, media personalities, and public figures alike — as ‘anti-national’ is mentioned, the median rate of retweet increases. 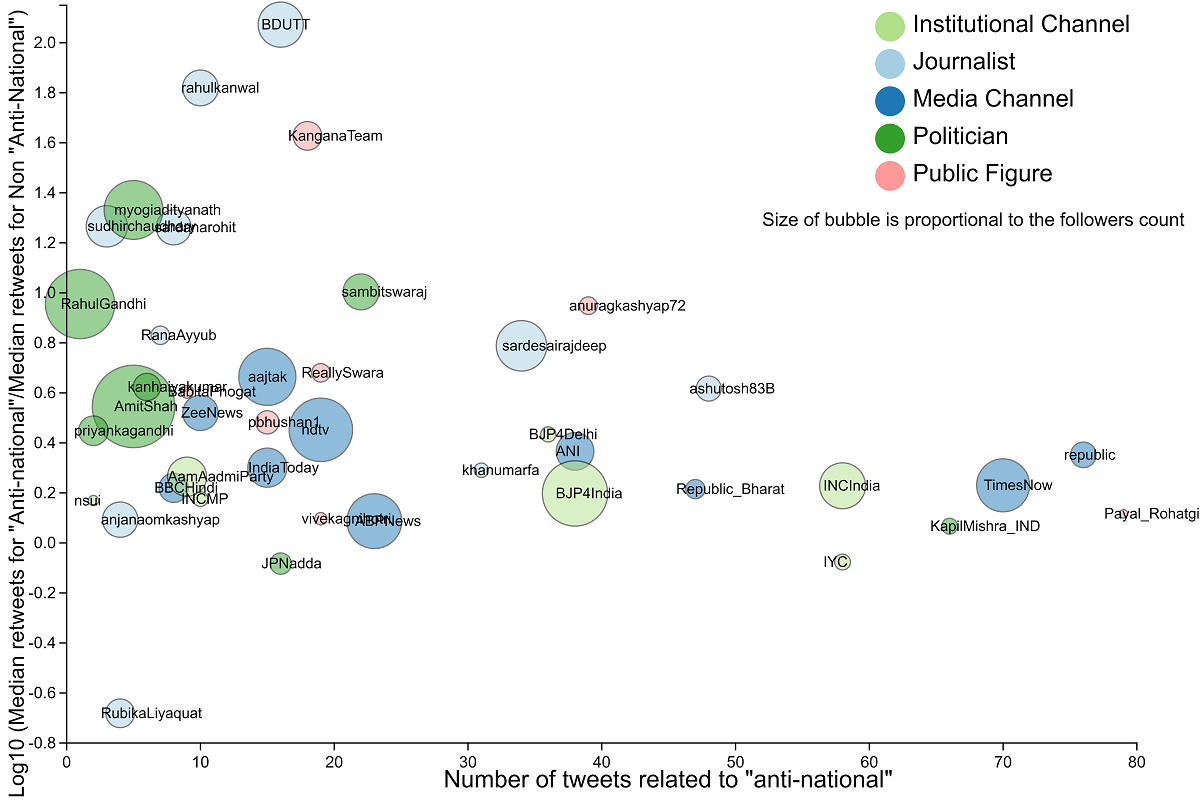 We also see two important patterns here. First, a small number of accounts tweet the terminology out significantly more than most others – @republic, @Payal_Rohatgi, @TimesNow, and while these do see a significant increase in retweets when the subject matter is ‘anti-national’ related (the figure is on a log scale), a few of highly influential accounts including journalists Barkha Dutt and Rahul Kanwal and actors Kangana Ranaut and Anurag Kashyap get much more attention.

Among public figures mentioned in ‘anti-national’ Tweets we see the most concerted targeting was aimed at Deepika Padukone, who has never actually used the term in a tweet. Likewise, Anupam Kher tends to be co-mentioned, but has not used the term himself. While Kangana Ranaut also gets significant mention, a share of those are just co-mentions in which the actual target is someone else, the co-mention being aimed at garnering more attention. Anurag Kashyap is both targeted, but also pushes back against the anti-national term a lot in his tweeting.

Table 2: Most mentioned public figures in tweets of politicians including the text ‘anti-national’ between 2016 and 2020, and their own use of the term

While individuals are frequently targeted, so are specific themes. For instance, West Bengal is frequently targeted alongside the term ‘jihadi’, used to refer to the Muslim population in the state and proposing they support the ruling TMC government. Likewise, support for birthday celebrations for Mysore ruler Tipu Sultan are presented as ‘anti-national’.

From among frequent users of ‘anti-national’ we find that the most active users of the terminology tend to be mid- to low-level politicians, usually those with less than 10,000 followers, who originate such tweets. In general, higher-ranking politicians eschew the term. In Table 3 below, we see the major politicians and party handles that use the term the most.

Table 3: Politicians and Institutional/political handles with over 200,000 followers that most use the text ‘anti-national’ between 2016 and 2020

We see here that there is a spread of organisations on the BJP and INC sides that are frequent users of the anti-national terminology. The Indian Youth Congress handles from various states are among the most aggressive users of the language. Among politicians, Sambit Patra, Subramanian Swamy and Digvijay Singh use the language a lot — and while Singh tends to use it against the BJP, Patra and Swamy also use it against casual citizens. From among the other politicians who use the term a lot, Misa Bharti and Alka Lamba tend to push back against the use of the term, rather than use it against others.

Joyojeet Pal and Ankur Sharma are social media researchers. A version of this article, with academic references, first appeared here.