In Kashmir, VPNs Allow Residents to Slip Past the Region's Firewall

It’s not clear why authorities haven’t been able to ban VPN applications, much to the anger of local police and the happiness of local residents. 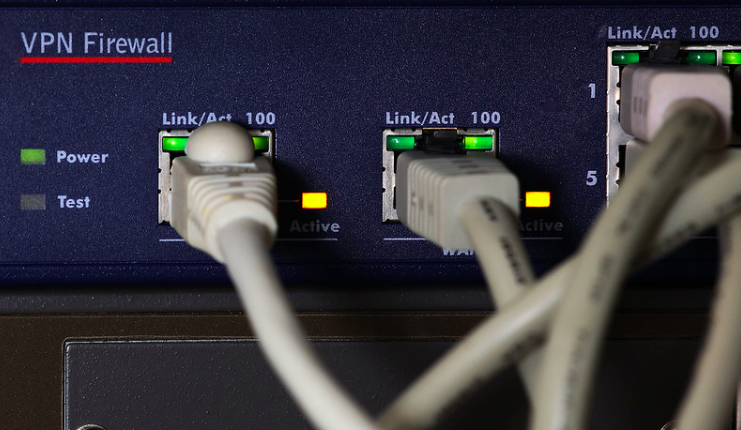 A few days ago, Shameema, who is 61 years old, cried when she finally caught a glimpse of Parray through a WhatsApp video call from her home in the Bemina area of Srinagar.

Parray, 25, works in a hotel in Riyadh as a store manager.

“Last time on the evening of August 4th, I saw him through a video call. It was only after six months, on 5th of February, that my elder son brought a VPN application in his phone, by which I got connected with my beloved son,” says a visibly relieved Shameema through tears and a smile.

On August 5, 2019, the Narendra Modi government read down Article 370 and nullified Article 35 A of the Indian constitution. In the process, the Centre effectively snapped all forms of telephone and digital communication.

In the backdrop of complete blackout, many residents of the Jammu and Kashmir union territory say that they could not see their far-off families for months together.

For instance, Mebhoob Makhdoomi, an MBA graduate from the University of Pennsylvania, could not see his parents living in Srinagar. “It was only on January 31 when my parents in Soura Srinagar managed to send me their first photo,” says Makhdoomi.

While posting a photograph of his parents on Facebook, Makhdoomi wrote: “Received the first photo of my parents after so many months. What a privilege! We have definitely faced this separation too.”

After five months of an internet blackout, the government ordered the restoration of low speed 2G mobile internet services on January 24. It also created a white-list of a few hundred government-approved websites and services that could be accessed using 2G and broadband connectivity.

Since the restoration of 2G services, the demand for VPN (Virtual Private Network) applications has increased in the Kashmir Valley. These apps typically establish an encrypted connection between a user’s device and a private server. VPNs allow users to stay untracked from their original locations and are widely used for privacy, avoiding surveillance or accessing restricted websites.

In the Valley, VPN applications these days are talk of the town – “Name the VPN you are using? Which VPN boost internet speed? My VPN is dead? Need working VPNs.”

Despite the government resuming slow-speed 2G internet connectivity for the 301 “whitelisted” websites, the list didn’t include social media platforms or similar applications/websites that allow peer-to-peer communication. Due to this restriction, people started installing VPNs to allow them to access social media sites.

“We know it is illegal to use VPN apps but we do not have any other option to access the social media,” says Riyaz Parray, Shameema’s elder son, who has successfully installed a VPN application on his mid range smartphone.

With the help of these apps, Kashmiri residents have posted selfies, made video calls to loved ones and poked fun at the government’s social media ban.

While connecting to their Facebook and Whatsapp accounts through VPNs, users mocked the government. Posts like “VPN Zindabad” and “I Love VPN” were uploaded by many Kashmiri netizens.

The social media ban, however, continues to affect the vast majority of users not well-versed with technology. “Even though I am an engineer in the power development department, I was unable to download a VPN and hence could not yet video call my daughter who studies in Uzbekistan,” Manzoor Ahmad, a 45-year-old, told The Wire. 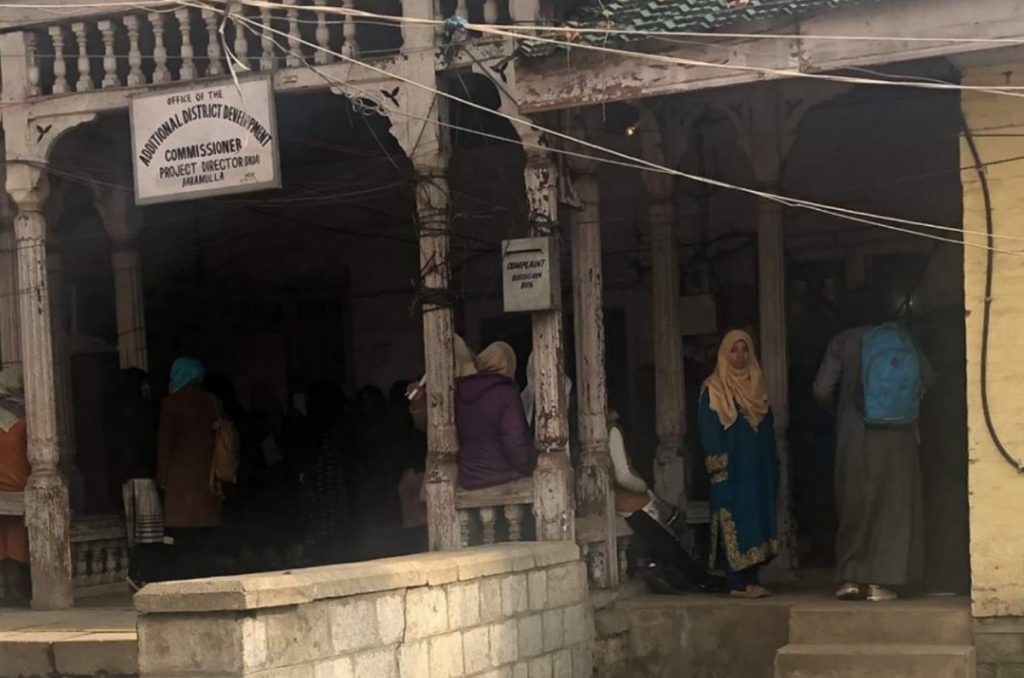 The puzzling part however is that VPNs are supposed to be banned across the union territory.

The conditions of access for both resumption of 2G and broadband connectivity rest on the fact that the approved ‘white-list’ of websites and applications contain no VPNs. For broadband restoration, institutions have been asked to sign bonds committing not to allow IP addresses for accessing social media. The bond also bars use of VPNs, Wifi, encrypted files, videos and uploading of photos. All USB ports of the computer will have to be disabled also. The users or the company will be responsible for the breach or misuse of Internet connectivity.

As per a local news gathering agency, Nazir Ahmad Joo, general manager at Bharat Sanchar Nigam Limited (BSNL), declared that they have asked a team of experts from Noida and Bengaluru to create a firewall to thwart any attempt by the users to access social media applications using VPNs.

He said the broadband Internet services would not be restored in Kashmir until the firewall is created and access to social media is restricted.

A senior officer in the J&K administration admits that VPN apps have spread in Kashmir like a ‘virus’.

“People these days meet and share VPN which ultimately poses a threat to security. Though government tried hard to block VPNs but so far there is no success, the officer told The Wire.

Even on Wednesday, Dilbagh Singh, the Director General Police of J&K, during a press conference said that police had got reports about misuse of VPNs after restoring low speed 2G mobile internet.

“Soon after restoration of 2G, it is raining VPN all over. We have received reports about misuse of VPNs. Recently, in Nagrota encounter, a trucker who ferried three militants sent a photo of an encounter as a matter of evidence to Pakistan. Before receiving the militant group, he was in constant touch with Pakistan on Whatsapp,” said the DGP.

Why aren’t they blocked?

There are two issues to consider when talking about how VPNs have slipped through the J&K administration’s efforts at constructing a white-list that sharply restricts Internet access.

The first is the questions of how residents of the union territory are downloading the apps. A few ground reports, including one published by The Wire, have indicated that both Google Play (Android app store) and App Store (Apple iOS application store) don’t work even in a limited manner. 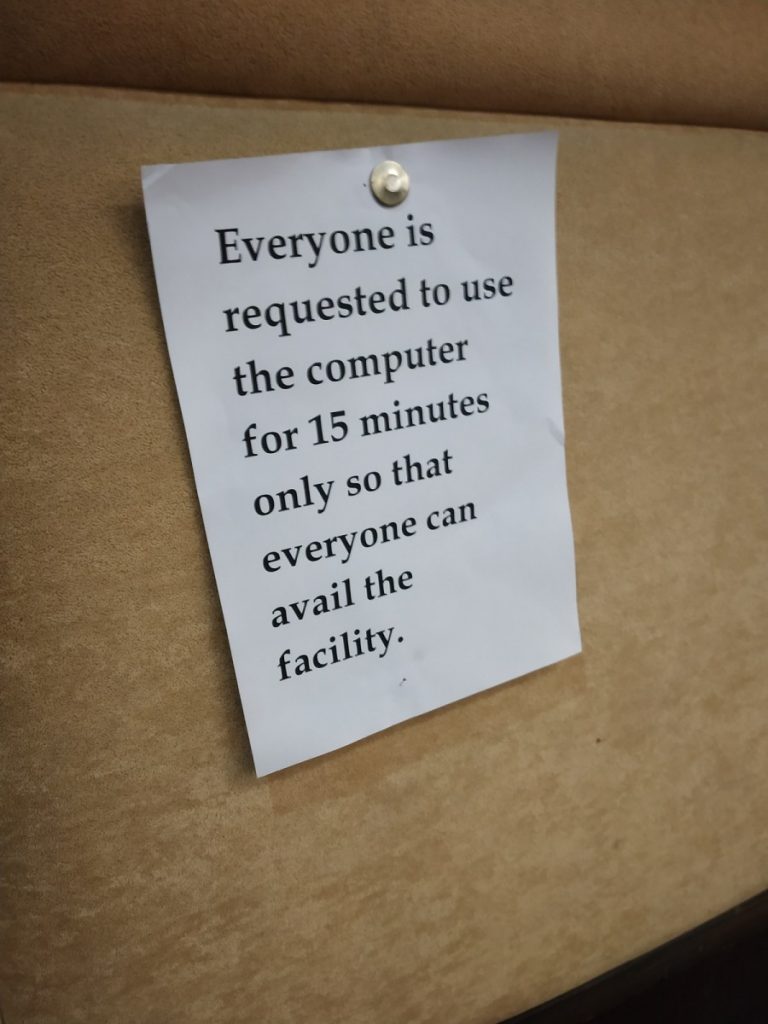 A message in a media centre set up in a private hotel in Srinagar with limited internet access for journalists. For months it remained the only place where journalists could get brief internet access in Kashmir. Photo: Majid Maqbool

So how are VPN apps then loaded onto a smartphone? For this, it appears most users have creative work-arounds including having friends from outside Kashmir download the apps and upload them in ‘APK’ formats onto services like Google Drive or Dropbox, both of which are on the government’s whitelist. They can be downloaded with ease. Once a person has a VPN app on their phone, they can also share it to another person’s device through a variety of ways.

The second question is how the apps work despite the J&K administration’s white-list, which has otherwise been successful at blocking every communication or messaging app. The answer to this is not clear.

Indeed, there are now apprehensions among people that the government might start blocking specific mobile VPN apps. This is why users have stocked several VPNs in their phones to prolong their chances of using social media.

“If the government blocks one VPN we will run another and it will go on and on. My friends in Hyderabad are also searching for some vital VPNs which will not get easily blocked,” says Shahid from Parraypora Srinagar.

She adds that she is now sharing these VPNs with her friends, through mobile-to-mobile sharing applications like Share It and Bluetooth.

Despite the presence of VPNs, many people complain that owing to poor Internet speeds, they are unable to view pictures or videos. “The speed is so slow; it takes a few minutes for the entire text to appear on screen. A simple picture on Facebook would take you at least five minutes to see it,” said Aijaz Ahmad, a resident of north Kashmir’s Bandipora.

Many in the Valley question the government’s failure to block VPN apps. “I wonder if the government is pretty keen to block social media why they have failed to block it yet. If social media websites and applications can be blocked why VPNs cannot, asked Muzamil Ahmad, an employee working in an automobile company.

When asked, Hilal Ahmad Bhat, an engineer who works in BSNL said that it is impossible to carry out censorship in a fully effective manner.

Replying to a question, a senior telecommunication engineer working in Reliance Jio’s main office Budgam told The Wire that simple applications like Facebook, Twitter, Whatsapp and Instagram can be blocked because these apps supposedly have registered servers. In the case of VPNs people use proxy servers that allow users to change their location to circumvent regional internet blockades.

He added: “The VPNs originate from unknown locations with international servers and a country like India cannot block all the VPNs available on the Internet.”

A senior police officer, when contacted, said that they are monitoring the situation in the aftermath of the ban. “We are well aware of this fact that the internet is being misused with the VPNs. We are discussing and analyzing things to stop the misuse of Internet in the valley,” he said.

Irfan Amin Malik is a reporting fellow at The Kashmir Walla. He has worked as staff reporter at Greater Kashmir.