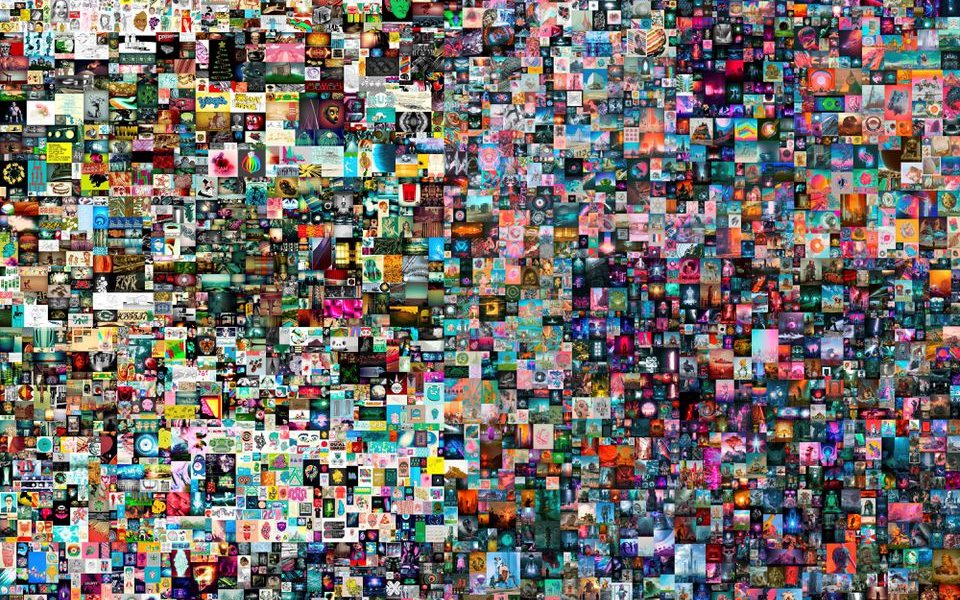 "EVERYDAYS: THE FIRST 5000 DAYS" is a collage, by a digital artist BEEPLE, that is on auction at Christie's, unknown location, in this undated handout obtained by Reuters. Christie's Images LTD. 2021/BEEPLE/Handout via Reuters

Indian modern art is beginning to appear in the astonishing digital market as non-fungible tokens (NFTs) that can suddenly fetch millions of dollars – even though they exist somewhere out in the crypto stratosphere of Ethereum and Bitcoin blockchains and you can’t hang them on your wall as one-off creations.

Two relatively small South Asian art and collectibles auction houses, Prinseps of Mumbai and Dubai-based Artiana, launched NFTs last week. Others are planning launches and exploring the potential, trying to assess the appeal of the little-understood technology to existing art collectors and a wider range of speculative digital buyers.

Prinseps has auctioned small relatively low-priced figurative works (right) painted in the late 1940s by Gobardhan Ash, a little-known but significant Bengal artist. Artiana has a fixed price sale of larger more expensive works by better-known Sakti Burman, who lives between Paris and Delhi and is still actively painting.

A different sort of NFT sale is planned by Kent Charugundla, a New York-based leading collector of Indian art and a blockchain specialist, with a massive work by the revered M.F. Husain. (He talks about that with Prinseps curators and others on this YouTube session that also covers the Gobardhan Ash works.)

Many traditional collectors of Indian modern art are mystified and scathing about NFTs, which use the same technology as crypto currencies such as bitcoin to create a certificate of ownership over a specific digital file that cannot be copied or forged.

Pratap Bose, a long time Mumbai-based collector and dealer, who bought several of the tokens in the Prinseps auction, sees them as a good investment. “Like the stock market, it’s taking a punt,” he says, adding that much of Indian art is undervalued so there is strong potential.

For artists, the NFTs provide a way to benefit from the often substantial increases in prices that come after their works are initially painted and sold. In some countries, including the UK and EU, artists benefit from resale rights that give a percentage commission on their works in the secondary professional market. This lasts through their lifetime and for 70 years after their death. That does not apply in India, which will increase artists’ potential interest in having their works offered as tokens.

Estimates of NFT sales globally last year range from $18 billion to $25 billion, up from $94.9 million in 2020. They vary “from cartoon apes to video clips” (as Reuters put it) with images, videos and even lands in virtual worlds.

The tokens broke onto an unsuspecting art world in March 2021 when a jpeg file collage of tiny digital sketches done daily for over 13 years by South Carolina contemporary artist Beeple, sold for $69.3 million at Christie’s. It had been launched with a $100 bid just two weeks earlier. The FT reports that “the artist, whose given name is Mike Winkelmann, summarised his reaction to the sale with a tweet: ‘holy f..k’ ”.

Major auction houses and artists have cashed in on the craze, but they seem wary of bringing South Asian art to the virtual table. Christie’s, Bonham’s and Sotheby’s have not yet decided what to do. Saffronart, the Mumbai-based market leader, is focussing instead on reinventing auctions with a new platform that Dinesh Vazirani, the founder and ceo, says he plans to launch next month.

Deepanjana Klein, the head of Christie’s South Asian art business, gave me the best logic for what is happening: “NFTs are an additional art form, such as photography, installations and digital art or AI that entered the art world at different moments in time,” she said. They were “about democratisation of art and sharing of the digital art which goes with the NFT – anybody can download the art but the token belongs to only one person”.

The democratisation comes from everyone being able to access the token on the internet, while only the buyer has ownership of the token and can sell it – though arguably that can also be said of ordinary paintings whose images can be accessed and shared by anyone on the internet. The NFT owner can of course print out the image and put it on a wall, knowing he or she owns the digital token. The original painting could sometimes also be bought.

Prinseps decided to launch itself into NFTs with Ash’s works from the 1940s because it felt his small paintings were in tune with the cryptopunk images’ primitive style and vibrant colours that fuelled last year’s enormous NFT growth. The works “were very avant-garde for the time – and 70 years later cryptopunks become commonplace,” says Brijeshwar Gohil, a Prinseps curator.

Some of Prinseps buyers went on January 14 for both the original and the token, while others chose only one. A few collectors tried to win as many as possible, judging by the frequency that some “alias numbers” appeared on the auction website during the bidding.

Among them was Bose, a former top advertising executive. He says that Ash is an under-recognised Bengal artist “who never got his due”. That intrigued him, not for hanging works on the walls of his home but as an crypto investment.

Prinseps’ next NFTs auction is likely to be fashion sketches by Bhanu Athaiya (1929-2020), a film costume designer and Oscar winner, whose works it has sold earlier.

While Prinseps did a deal with Ash’s estate for the NFT rights and mounted the auction on its own website with purchases payable in Indian rupees, Artiana has worked out an arrangement with Sakti Burman and his family to sell 40 NFTs on the OpenSea crypto website. The works are priced in OpenSea’s Ethereum crypto currency, accompanied by the conventional currency equivalents – roughly $20,000 to $40,000.

The dollar rates were negotiated by Lavesh Jagasia, who runs Artiana, with Burman according to what the artist felt he should receive relative to current market values – and what the buyers might accept, given that this is the first such Indian sale.

Jagasia says Burman’s works are specially suited to NFTs because of the fresco-like images produced by artist’s marbling oil on paper and canvas technique, which the artist was using between the 1980s and 2015.

The originals of the 40 works are now in private collections and Artiana is trying to find the owners so that it can offer them the NFT of their paintings. That process will end on February 8 (Burman’s 87th birthday), when the unsold tokens will be generally available on the OpenSea website.

The other current NFT investment offering, that lasts through 2022, is of tokens for a famous 60ft x 10ft mural, Lightning, by M.F. Husain, one of India’s leading modernists and a member of the mid-1900s Progressives. Charugundla bought the work, which was painted in 1975 and is Husain’s largest work, direct from the artist in 2002. It consists of 12 panels depicting galloping horses, a Husain favourite.

The NFT “drop” is on a special platform lightning.io with Prinseps helping on marketing. Later secondary sales will be on OpenSea. Investors can buy small random parts or “traits” of NFTs at prices that Charugundla says will be set relatively low. Buyers who manage to assemble what is called a “royal flush” of 62 “traits” will be given an NFT of the whole work that can later be traded.

Although the virtual currency world has hit headlines because of astronomic increases in values like Beeple’s $69.3 million sale, the craze for cryptopunks images was built on very low prices, which Prinseps has echoed with its Ash works. It remains to be seen whether there is a virtual market stretching up into the $20,000 to $40,000 that Artiana wants for its Burmans, and how much speculation there is on the Husain.

Scepticism remains. The total market value of NFTs on the Ethereum blockchain is held by just 9% of the accounts, according to one expert, rebutting the idea that they somehow democratically spread the assets widely.

The Washington Post reported last March that MetaKovan, who paid the $69.3 million, was in fact driving up the value of NFTs he had created earlier. He had bought 20 other works by Beeple for $2.2 million, divided them into 10m blockchain-based tokens, and sold 25% of them to the public.  As bids for the new work kept rising, so did the value of those tokens, which reached about $51 million by March 11, the day he won the Christie’s auction.

The Post’s conclusion? “The recent frenzy around digital art may be less a sign of an artistic revolution than a gold rush into highly speculative blockchain technology.”

This article was originally published on Riding the Elephant.