The media report notes that Pegasus was the 'centrepiece' of a 2017 deal between India and Israel.

New Delhi: India bought controversial spyware tool Pegasus in 2017 as part of a larger arms deal with Israel, according to a new report published by The New York Times.

Access to the spyware, which is classified as military-grade software and produced by the NSO Group, was reportedly part of a “package of sophisticated weapons and intelligence gear worth roughly $2 billion” between India and Israel.

NYT’s report, which examines how Israel reaped diplomatic gains around the world from NSO’s Pegasus spyware, details how the US’s Federal Bureau of Investigation bought a version of Pegasus. It also sheds new light on how the software ended up being sold to Poland, India and Hungary.

“The combination of Israel’s search for influence and NSO’s drive for profits has also led to the powerful spying tool ending up in the hands of a new generation of nationalist leaders worldwide. Though the Israeli government’s oversight was meant to prevent the powerful spyware from being used in repressive ways, Pegasus has been sold to Poland, Hungary and India, despite those countries’ questionable records on human rights,” the report noted.

According to the NYT report, India’s access to Pegasus was sealed in 2017. The story claims that “Pegasus and a missile system” were the “centrepieces” of a broader defence package worth $2 billion.

“In July 2017, Narendra Modi, who won office on a platform of Hindu nationalism, became the first Indian prime minister to visit Israel…The Modi visit, however, was notably cordial, complete with a carefully staged moment of him and Prime Minister Netanyahu walking together barefoot on a local beach. They had reason for the warm feelings,” the report notes.

“Their countries had agreed on the sale of a package of sophisticated weapons and intelligence gear worth roughly $2 billion – with Pegasus and a missile system as the centerpieces. Months later, Netanyahu made a rare state visit to India.” 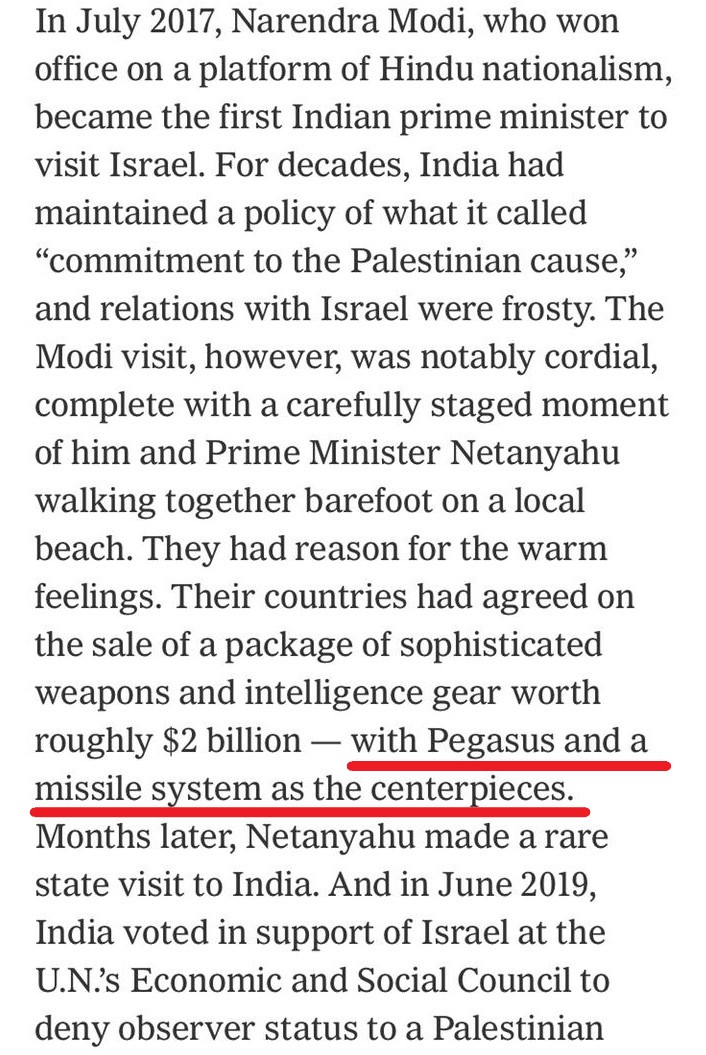 A screenshot of the ‘NYT’ report. Emphasis added by ‘The Wire’.

The report provides no further details on the specifics of the deal – or insight into which government department or agency procured it on behalf of the Indian government – but in April 2017, it was widely reported that New Delhi had signed a $2 billion (nearly Rs 12,880 crore) contract with Israel Aerospace Industries for supply of air defence missiles to the Indian Army.

In July 2021, a consortium of international media organisations including The Wire reported on the usage of Pegasus in countries across the world. In India, over 10 cases of Pegasus infection were found through forensic analysis conducted by Amnesty International’s Security Lab.

In 2019, messaging application WhatsApp sued the NSO Group over what it termed as an illegal breach of its software. At the time, the Facebook-owned firm confirmed that it had detected Pegasus targeting on the phones of several Indian activists and journalists.

The Indian government has been largely evasive in its replies with regard to whether it has purchased Pegasus or used it. In August 2021, the defence ministry clearly stated it had no business transaction with the NSO Group, leading to speculation as to whether an agency under the home affairs ministry was a customer.