The unsettling violence in Sweden brought out quick parallels to the Bengaluru and Delhi riots. 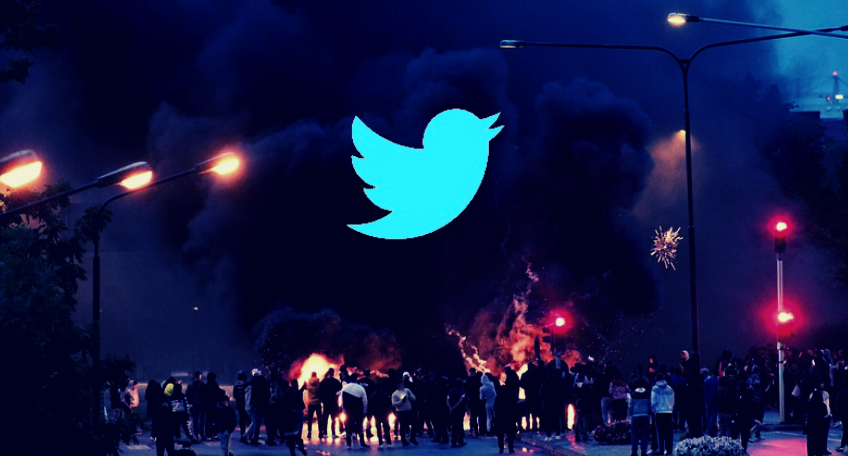 Illustration: The Wire. The Twitter logo in the foreground. In the background, smoke billows during a riot in Malmo, Sweden, on August 28, 2020. Photo: Reuters

Over last weekend, hashtags such as SwedenRiots, NorwayRiots and WeAreWithSweden were trending on Twitter in India.

This may have seemed surprising, but if anyone spent a few minutes looking at the content that was being shared, it became painfully obvious why this was happening.

A cursory Twitter search showed that many accounts which typically share India-centric majoritarian content were actively participating in the conversation, with plenty of local references to recent violence in Delhi and Bengaluru.

A more extensive examination using a combination of tools like Hoaxy, Twitter’s Advanced Search feature and APIs allowed us to dig in a little bit further.

In parallel, let’s also keep in mind the framework of Dangerous Speech, which can be defined as ‘any form of expression (e.g. speech, text, or images) that can increase the risk that its audience will condone or commit violence against members of another group.’

First, using Hoaxy, I attempted to get a sense of network clusters for these hashtags. Now, Hoaxy samples tweets, so its results should be considered indicative.

The size of the circles and density of clusters around it represent the amount of engagement (retweets, mentions, quote) an account receives.

The names that the visualisations throw up help corroborate, to an extent, what the Twitter search suggested – that a lot of the activity on these hashtags was being driven by accounts that associate themselves with pro-Hindutva narratives.

Where did they come from?

Next, I used Twitter’s API to capture around 60,000 tweets across these 3 hashtags on August 29 and 30. Approximately 30,000 unique accounts shared content using at least one of these 3 hashtags. It is not uncommon for accounts not to include location data. For these hashtags, typically 40% did not (For context: I’ve typically seen this number vary between 45 and 60%).

In the doughnut charts below – which plot the number of tweets by location for the remaining accounts – the predominance of Indian locations is visible. 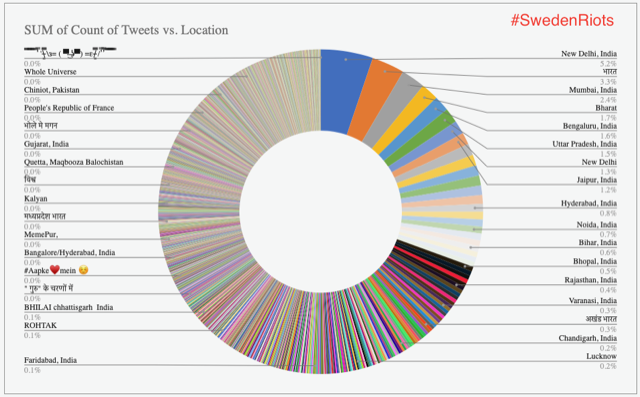 Location of accounts for SwedenRiots 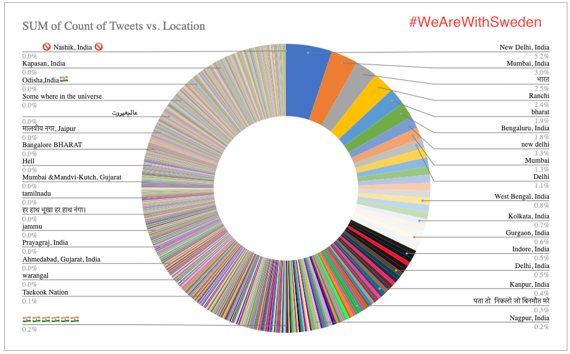 Location of accounts for WeAreWithSweden 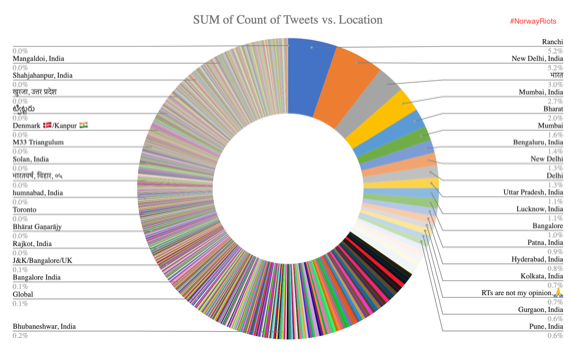 Location of accounts for NorwayRiots

What did they say?

Using the datasets extracted from Twitter’s API, it was possible to create hashtag clouds to visualise the hashtags that were used along with #swedenriots, #wearewithsweden and #norwayriots.

The combination of these clouds along with the most retweeted posts showed that much of the conversation was about linking the Sweden riots to recent violence in Bengaluru, the Delhi riots in February and the anti-CAA and anti-NRC protests across the country over the last eight months. One prominent narrative thread, even if not explicitly stated, was that this was the outcome of accepting Muslim refugees.

In addition, there were also the usual attempts demanding people speak out, including Greta Thunberg who recently expressed her concerns about the decision to conduct exams in India even as COVID-19 cases continue to rise. Ann Linde, from the Social Democratic Party in Sweden, who had expressed concerns about the lockdown in Jammu and Kashmir in August 2019, was also targeted. As was Aamir Khan, a popular target ever since he made comments about the rising levels of intolerance in the country back in 2015. 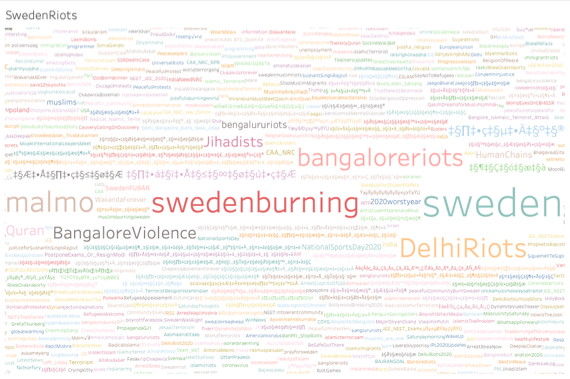 The hashtag cloud for SwedenRiots. The size of each word denotes the frequency of usage. 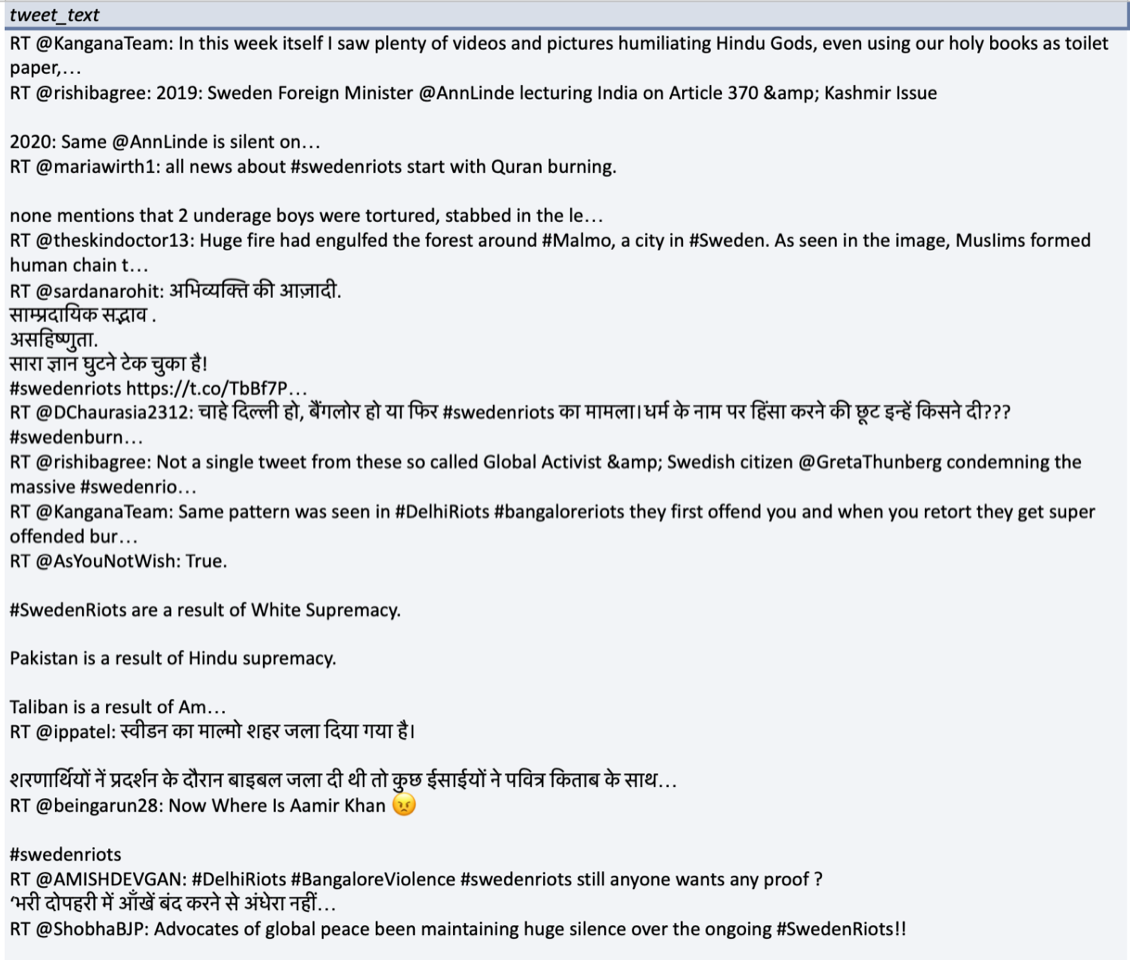 A sampling of some of the most RT-ed tweets using the hashtag. Note: Twitter’s Search API only exposes partial content.

A plot of the unique tweets vis-à-vis their occurrence is very top heavy, indicating that a limited set of tweets were the most popular. The top 1% of tweets accounted for around 55% of the activity. Note that this is not necessarily a deviation from regular patterns on twitter. Combined with the content of the top retweets, this is meant to indicate the narrative that was being pushed. 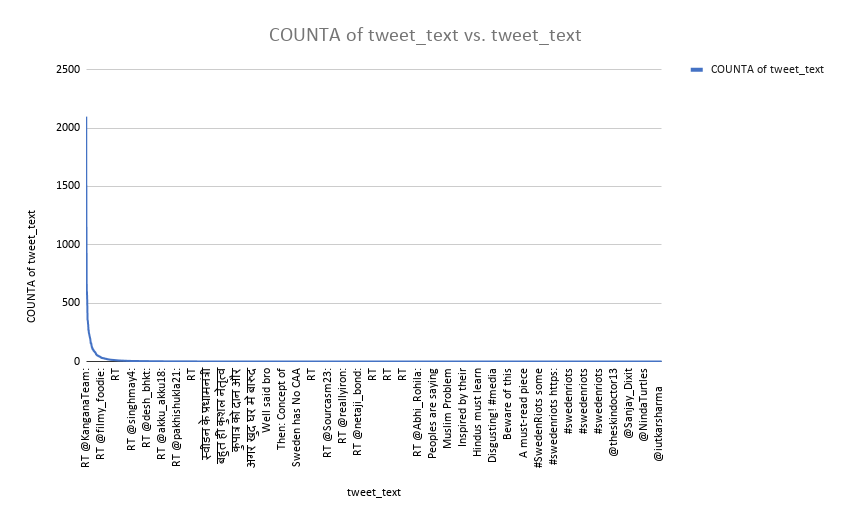 Conversations using this hashtag attempted to to express solidarity with Sweden, while also pointing out that the country ‘dug the pit for itself’.

Rather curiously, there was an account which purportedly belongs to a caucasian Swedish citizen that was thankful for the fact that #WeAreWithSweden was trending in India which got a significant amount of engagement in terms of retweets and likes.

This account, created in August 2019, does not seem to have any tweets published till early January. However, one of its first few available tweets appears to use Hindi/Urdu in Roman script (the second screenshot below). The sentence composition style also appears to be South Asian rather than Northern European. This assessment, however, is admittedly subjective and does not confirm or discredit the account’s authenticity. 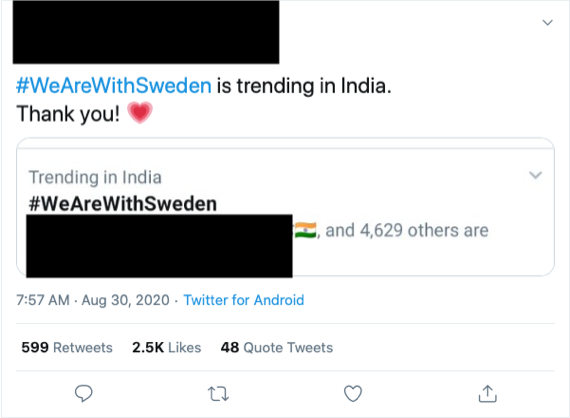 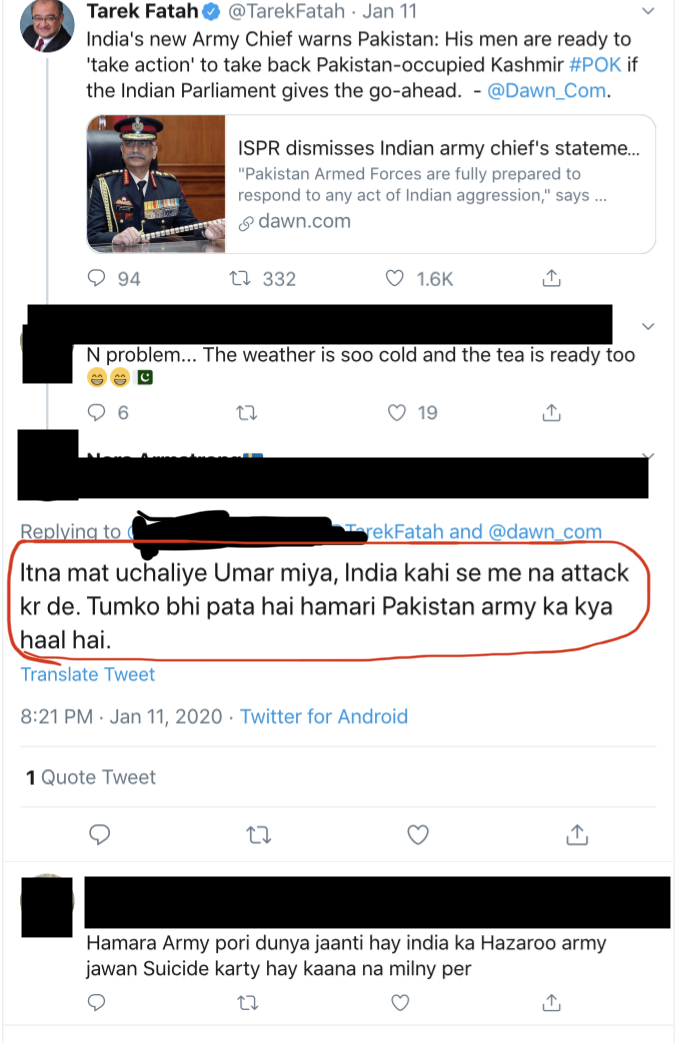 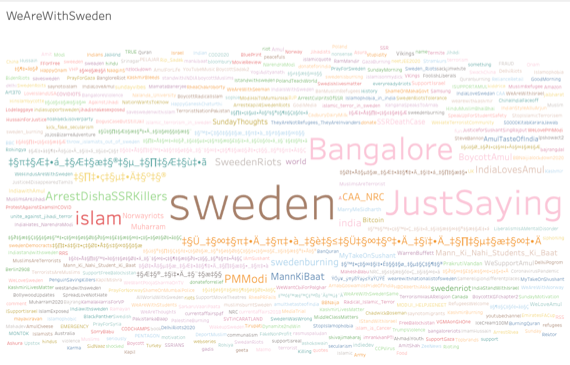 A hashtag cloud of ‘WeAreWithSweden’. Note: the size of the words denotes frequency of usage. 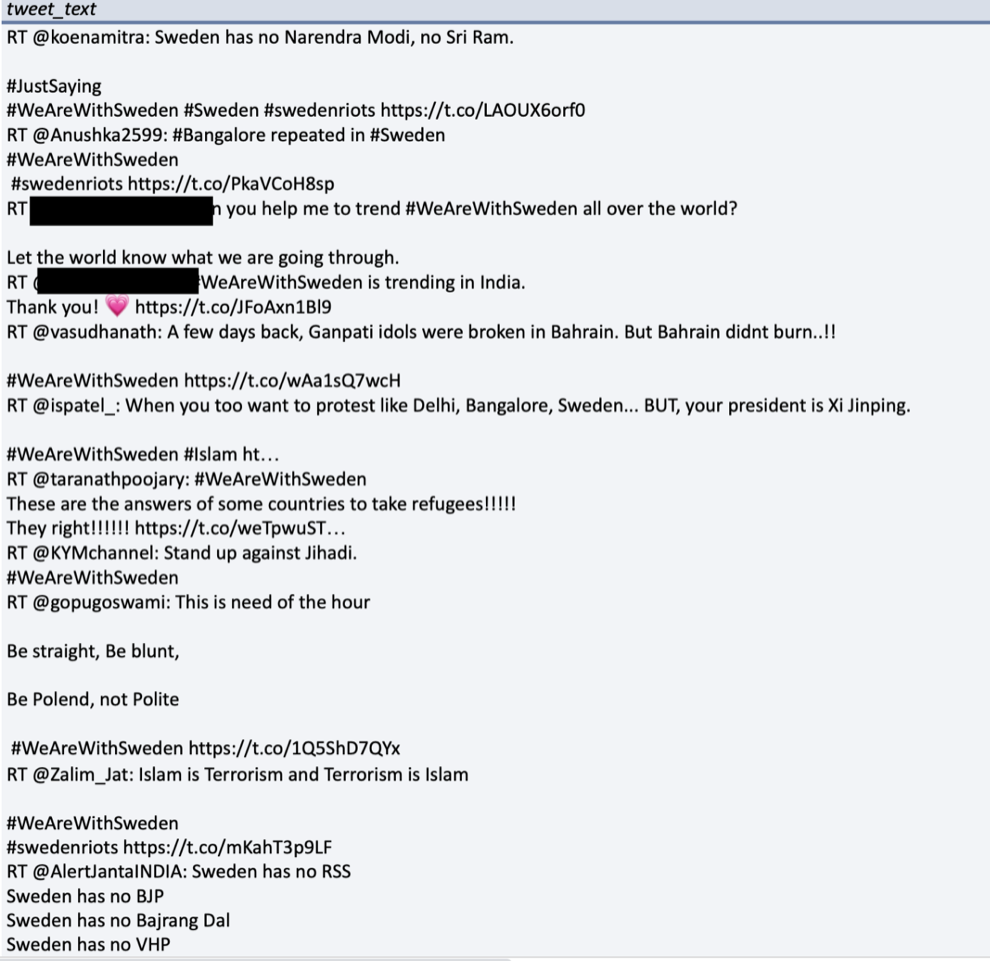 Just as it was for SwedenRiots, in this instance too, a plot of unique tweets vis-à-vis their occurrence indicated a heavy-top and a long-tail. The top 1% of tweets accounted for nearly 66% of the activity. 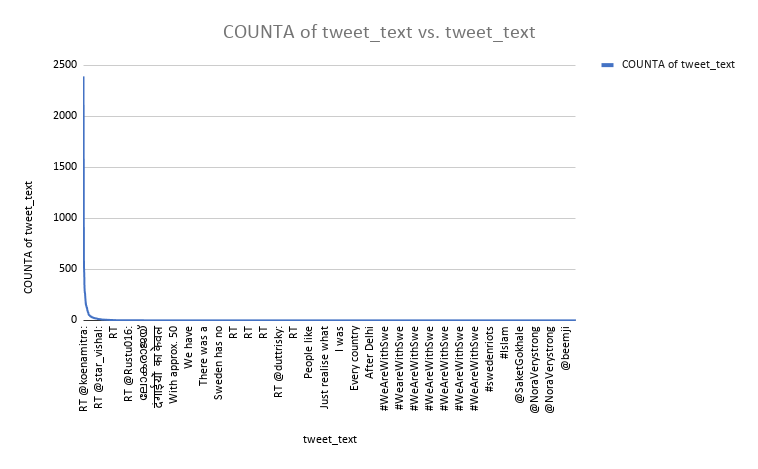 While largely employing the same narrative as the previous two hashtags, praise for Poland also figured prominently amongst the tweets with the most engagement. The country was being praised presumably because of the ruling party’s refusal to take in any Muslim refugees. 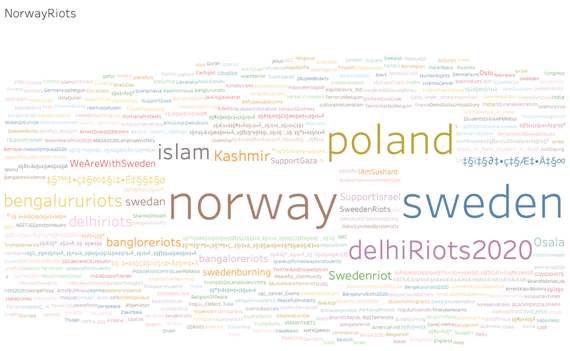 A hashtag cloud of #NorwayRiots. Note: Size of the word denotes frequency of usage. 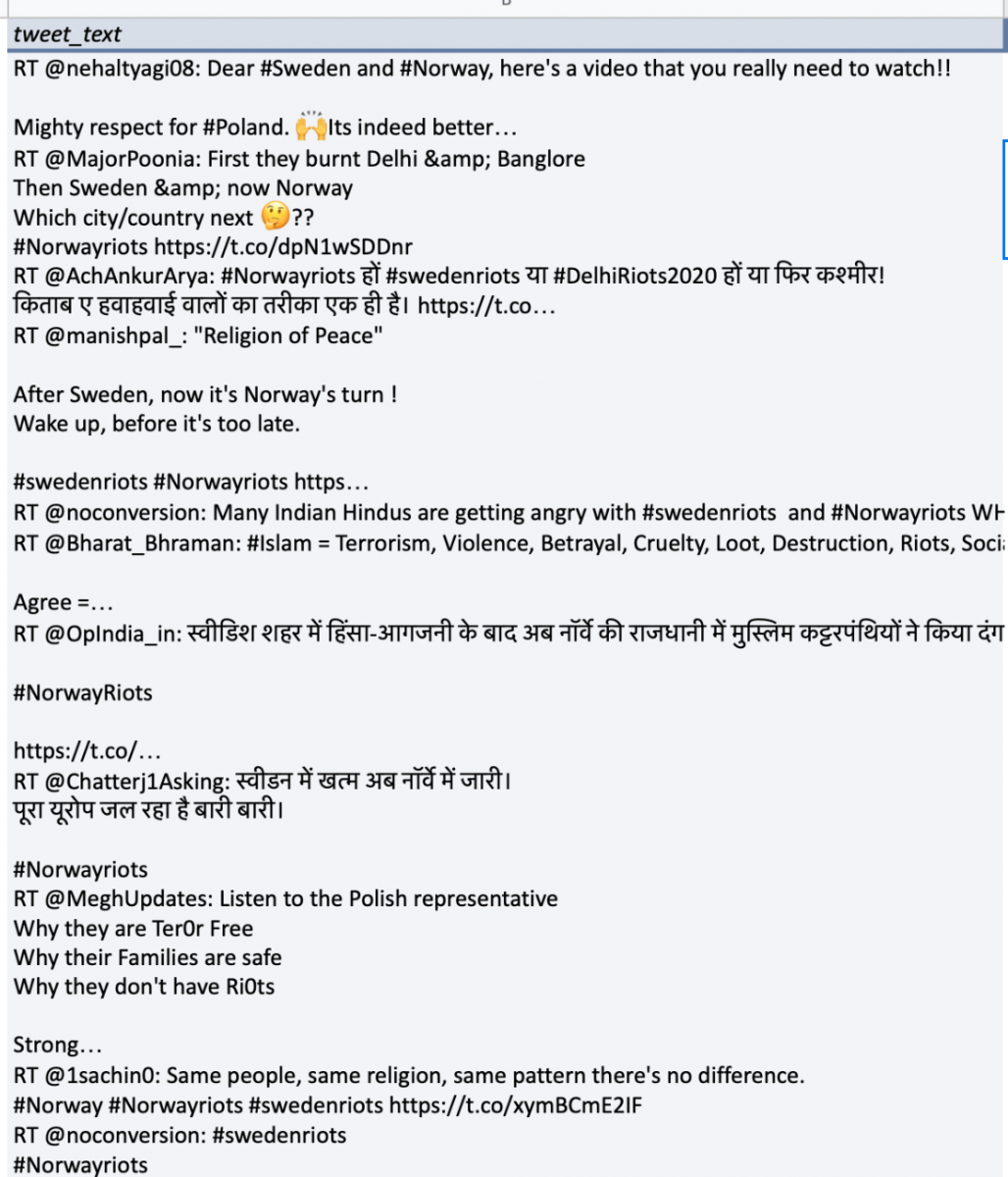 Again, with this dataset too, a plot of unique tweets vis-à-vis their occurrence indicated that the top 1% of tweets accounted for around 72% of the activity. 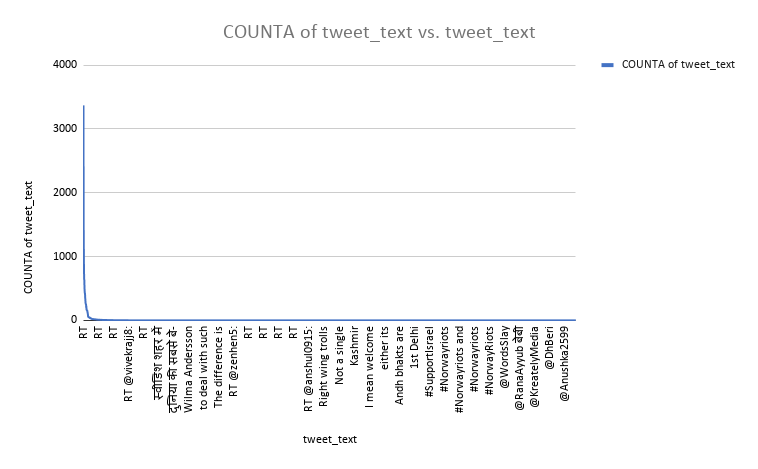 With the weekend gone, these trends have now fallen off Twitter’s trending lists for now, and replaced by other topics in the current news cycle.

While these trends may seem ephemeral, the narratives they put forward play the role of continuously polluting the information ecosystem and normalising hate against at-risk groups. As we’ve painfully witnessed repeatedly, this aligns with the definition of the dangerous speech framework introduced earlier: ‘expression (e.g. speech, text, or images) that can increase the risk that its audience will condone or commit violence against members of another group’.

Prateek Waghre is a Research Analyst at the Takshashila Institution. He writes about Information Disorder in India.