Srinagar Man, Dead for 60 Years, 'Gets' Both Shots of COVID-19 Vaccine 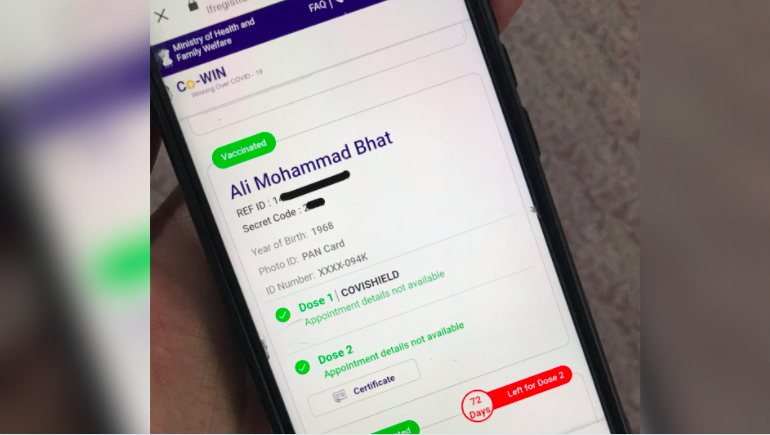 Srinagar: The Union government’s CoWIN website for vaccination has registered a Kashmir man, whose family said he died six decades ago, as one who has received both doses of the COVID-19 vaccine.

Thirty-three-year-old Mudasir Siddiq from the Kohlipora area of Khanyar in Srinagar city said he was surprised to find the profile of his grandfather Ali Mohammad Bhat suddenly showing up on the CoWIN website. Siddiq said his dead grandfather’s profile flashes the green “vaccinated” status.

“I tested positive for COVID-19 a month ago so I registered to receive my first dose only recently,” Siddiq told The Wire. “I also persuaded the rest of my family members to get their shots. They all got themselves registered through my number. All our respective status reports feature on the same page.”

To this correspondent, Siddiq demonstrated the above by logging into the CoWIN website, filling in his phone number, typing a one-time password and accessing his page. He scrolled down the page, revealing the names of family members who were registered under his number. Among them were his grandfather.

“I am surprised as to how my grandfather’s name made its way into the list. He passed away 60 years ago. I have never seen him. Even my father has little knowledge of exactly how and when my grandfather died,” he said.

Siddiq’s father did not meet any officials to correct this because, he said, they felt that “it doesn’t affect [them] adversely.”

Siddiq also pointed out that while the reference ID and secret code assigned to his dead grandfather were unique, his date of birth and PAN card number were the same as his father’s.

“Even if it’s a technical error, how does the website know the name of my grandfather? We did not even register him. And why is his PAN number the same as that of my father’s?” Siddiq asked.

The Wire called Dr Mushtaq Rather, director of health services in Kashmir who said that he was busy before disconnecting the call and asking that he be messaged instead.

A day after this report was published, an officer from the Directorate of Health Services, in a statement to The Wire said, “Four people can register themselves on the CoWIN app using one mobile number. And it’s not possible for two persons to share a single PAN ID. The CoWIN app would automatically refuse it. We are investigating how this has happened. Since the individual mentioned in the report died 60 years ago, PAN cards or Aadhaar cards weren’t available back then. PAN cards typically mention the name of the father right under the name of the card holder. So it’s likely that a technical error may have happened in this case. The matter is under investigation and we are rectifying it.”

J&K recorded 185 positive coronavirus cases on Saturday, July 10, representing a decline in new cases in the Union Territory. Since mid-June, J&K’s COVID-19 numbers have been going down and restrictions are now only limited to weekends.

The COVID-19 caseload in Kashmir was 63 cases per day on March 1 this year. In the same month, Kashmir witnessed large scale public events at many of its famed gardens and parks leading to increased public participation and flouting of distancing norms.

In the meantime, Prime Minister Narendra Modi tweeted out photographs of the tulip garden to his 68 million followers, which led to visitors crowding these spaces in large numbers.

Tomorrow, 25th March is special for Jammu and Kashmir. A majestic tulip garden on the foothills of the Zabarwan Mountains will open for visitors. The Garden will see over 15 lakh flowers of more than 64 varieties in bloom. pic.twitter.com/LwRPglZ1jO

It was only on April 27, when J&K logged a record high of 3,164 fresh cases – with 25 persons succumbing to COVID-19 in 24 hours and 100 in the previous 10 days – that the administration banned the assembly of more than five persons in Srinagar. On May 7, the number of positive cases in the UT breached the 5,000 mark (5,443 cases) – the highest single day spike since the start of the pandemic.

On May 31, the graded process to ease lockdown restrictions in the UT began. On Friday, J&K administration said they have accelerated the vaccination drive at religious places like Darul ulooms, orphanages, ashrams, gurdwaras, churches and juvenile homes in the Kashmir Valley.

An official said the increased pace of vaccinations is part of the government’s effort to stem the possibility of the third wave. There have been over 4,300 deaths in the UT so far.

The situation in Kashmir, while not as intense as Delhi, Mumbai or Lucknow, was dire in its own way – as evidenced by the volume of SOS calls and pleas for oxygen cylinders and vital medicines.

Around two dozen NGOs and a network of social media volunteers across the valley led the effort to ensure availability of oxygen and other life-saving drugs.

A day ago, the J&K administration ordered the resumption of services at out-patient departments, of surgeries and other routine services at hospitals across Kashmir.

Over 51 lakh vaccine doses have been administered in J&K so far, according to official count. Close to 43 lakh individuals have received their first jabs while well over 8 lakh individuals got their both doses in the UT.

There are 864 vaccination sites across the UT, out of which 858 are owned by the government and only six are privately operating.

Only eight of 20 districts in J&K have achieved 100% vaccination for people aged above 45 years. At 74%, Srinagar is among the worse performers alongside Kupwara (65.03%)

The Valley also witnessed a spate of confrontations over administering vaccines with healthcare workers often facing the wrath of residents who refuse to take shots. The administration in J&K has been taking to social media, urging people to overcome vaccine hesitancy.

Note: This report has been updated with the official response.