From Birth to Death, Taking a Look at India’s Real-Time Governance Dreams

The MHA’s proposed amendments to register births and deaths could pave the way for 360-degree profiling databases. The Unique Identification Authority of India (UIDAI) recently announced plans to enrol newborn babies into the Aadhaar programme at the hospital itself by partnering with the Registrar of Births.

This move comes at a time when the Ministry of Home Affairs (MHA) wants to make amendments to the Registration of Birth and Death Act, 1969 to create birth and death databases. Since 2014, most birth and death registration is already carried out electronically and has been further linked to the Aadhaar of next of kin. According to a circular by the Office of the Registrar General, Ministry of Home Affairs, the inclusion of Aadhaar is to achieve linkage between the Civil Registration System of birth and death registration with the National Population Register (NPR). The primary aim of this linkage is to maintain a real-time database of the population by keeping track of births and deaths.

As registrations of birth and death are already digitised and linked with Aadhaar, some of the proposed amendments to the Registration of Birth and Death Act can be seen as a mere procedural formality.

There is, however, an important amendment that is being proposed to allow sharing of birth and death registration databases to update the National Population Register, the Aadhaar database, voter database, the motor vehicles registry, ration cards database and passport database. Put simply, the MHA’s interest in using birth and death registration to update all other databases is to build a 360-degree profile of population databases of all Indians. While this sounds closer to the ministry’s NATGRID project, it comes with the new terminology of real-time governance.

The idea of real-time governance to track everyone in the country from birth to death is being shown as a form of predictive governance. The government needs to provide a host of services to citizens between birth and death. And by tracking people in real-time, these services will be provided before citizens can demand them. This process involves what they call life driven services – if someone turns 18, they are entitled to vote and using real-time governance, they will receive a Voter ID before they apply for one. Similarly, if a student joins a university and deserves a particular scholarship, it will proactively be given to him before she applies for one. A very techno-utopian idea of governance, where citizens don’t have to ask for anything and the government will provide it before one demands it. 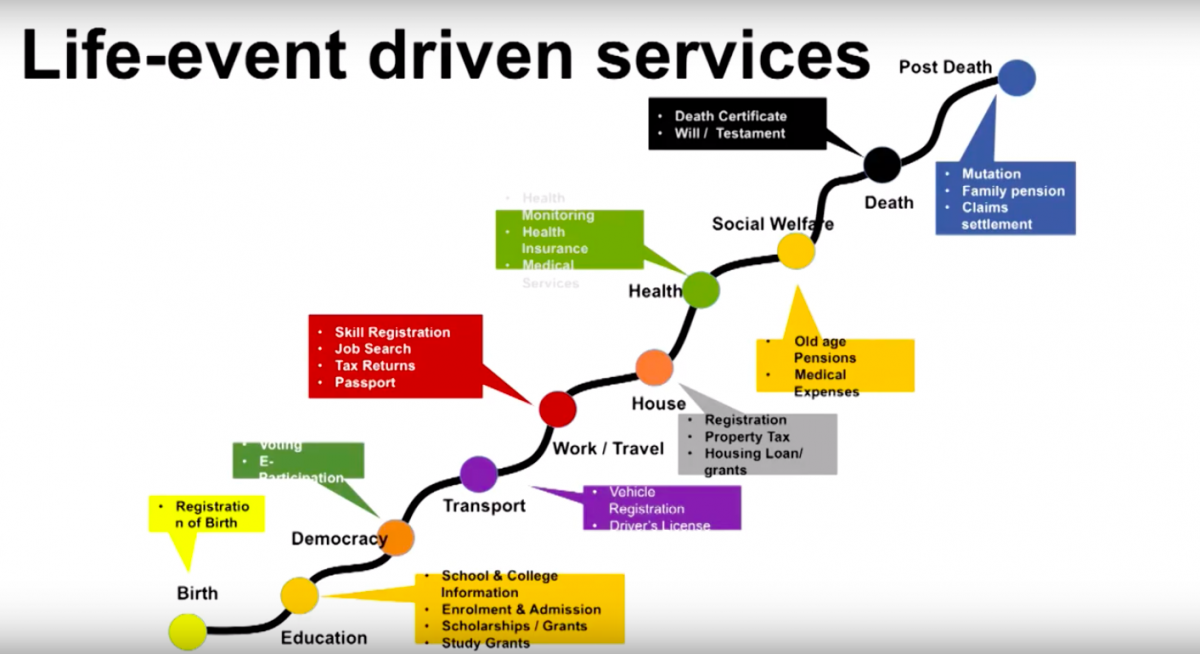 From Birth to Death, services that will be part of real-time governance.  Photo: J. Satyanarayan, retired IAS official.

To achieve this techno-utopian reality, a unified population database needs to be created which can be effectively used to track people in real-time. There were multiple proposals for such unified databases that were brought up during a DBT seminar in Delhi on July 22, 2016. One of the designs was SERVAM – Unified Beneficiary Database – which would centralise all population databases in the country by interlinking the National Population Register, the Socio-Economic Caste Census, the PDS, NREGA, pension, LPG and birth and death registration databases. The end outcome of this exercise was to create a real-time population database and a real-time services database.

While in theory, linking existing databases would be enough to build a real-time database of population, it is largely unverified data. Public-private partnerships and the introduction of village-level entrepreneurs (VLE) to collect data on the ground has induced a lot of faulty data into the system, even with Aadhaar. This has been the MHA’s concern since the beginning to not allow Aadhaar, but push NPR across India. Journalist Rachna Khaira, who has documented several cases of misuse of login credentials to these databases has investigated how the registration of birth and death certificates has also been gamed by these VLEs to generate fake certificates. The only way the MHA intends to clean up these databases is using Census 2021 and the creation of a ‘perfect’ National Population Register.

The proposed amendments make a case for a unified database at the state level. Several states have already digitised birth and death registration and have this data integrated with their respective State Resident Data Hubs. But now, the Union government is proposing to create a larger 360-degree profile family database. This has been confirmed by the minister of state for electronics and information technology in the winter session of parliament. The centralisation of this data from state to Centre is to further update the NPR and interlink it with other associated databases.

It is important to understand where these models of inter-linking databases to build unified databases are coming from Estonia. The post-communist nation became a World Bank laboratory in the 90s and was able to radically transform itself into a digital republic by building databases on top of their national digital identity. In Estonia, everything has a database and they are interconnected to create an information network called “X-Road”. The country has a national population register, a national vehicle register, a healthcare insurance register, a land ownership register and an e-police system. But Estonia is a tiny nation with a population less than Delhi.

The Estonian system has been actively adopted by several Indian states, primarily Andhra Pradesh and Telangana, where they are called E-Pragathi and Samagraha Vedika. Championed by J. Satyanarayana, the ex-UIDAI Chairman and MeITY secretary, real-time governance and 360-degree profiling has been extensively experimented in Andhra Pradesh under N. Chandrababu Naidu’s term. Several other states like Rajasthan, Haryana, Punjab have followed to build family databases and family IDs. These systems are not new and were actively promoted by the UIDAI since 2011, terming them State Resident Databases. The extensive push and experimentation that took place in AP and Telangana has caused several problems – including voter deletions and leak of the entire State Resident Data, including Aadhaar numbers, to Chandrababu Naidu’s Telugu Desam Party in Andhra Pradesh.

The MHA’s push for a civil registration system, MPR, Aadhaar and NATGRID are proposals that came after the 26/11 Mumbai attacks, ostensible to tackle internal security. The initial idea of NATGRID was to inter-link databases from 21 departments to allow security agencies to profile the population. Indian activists have always warned that linking Aadhaar with different databases will effectively be used to inter-link these databases to help build 360-degree profiles like NATGRID. This issue of 360-degree profiling too was raised as part of the Aadhaar case in the Supreme Court with respect to the State Resident Data hubs. During the proceedings, the Supreme Court was informed by the Union government that these databases do not exist anymore. Therefore, the judgment doesn’t look into this issue.

Real-time governance also involves real-time policing, which is actively visible in Hyderabad, where the police have built a 360-degree profile database of everyone in the city, terming it the Integrated Information Hub (IIH) with access to Telangana’s State Resident Data Hub. Similar to their counterparts in Estonia, the Hyderabad police have access to everyone’s personal details and actively collect new information using door-to-door searches in the city. While Estonia has some accountability and transparency in place, India has no oversight or laws in place to protect personal data.

There are many 360-degree profiling databases that are being built by the Union and state governments. These include NATGRID, Crime and Criminal Tracking Networks and Systems, Integrated Criminal Justice System, Project Insight, Social Registry, Family Database, State Resident Data Hubs. All of these systems are further connected with a large system called the India Enterprise Architecture – India’s equivalent of Estonia’s X-Road. State Resident Data Hubs, which were supposed to be non-existent, are now State Enterprise Architectures. Apart from these governance databases, several stacks built by the private sector like IndiaStack, HealthStack, Urban Stack, AgriStack become part of this larger network.

The draft data protection Bill gives blanket exceptions to the government in data collection and processing, enabling the creation of these 360-degree profile digital infrastructures. There may be many perspectives on the tiny amendment to the Registration of Births and Deaths Act. But from a political economy lens, it has far-reaching consequences for Indian democracy.

Without a serious privacy and surveillance law, this Bill should not be discussed in isolation. While the nation-state has powers of both surveillance and registration of births and deaths, the blanket creation of 360-degree profile databases of everyone needs to be questioned.