Kolkata: A Twitter handle, Bangladesh Hindu Unity Council (@UnityCouncilBD), which has posted images and videos of various incidents of vandalism and attacks on Durga Puja pandals across Bangladesh, had long been flagged as fake by the minority rights organisation it claims to belong to.

The @UnityCouncilBD account is verified by Twitter and has over 27,000 followers. It has been cited widely in news reports.

This account was made in January 2021 and has tweeted only 386 times. The organisation “Bangladesh Hindu Unity Council” appears to have no other digital footprint, other than the Twitter page – it has no website or Facebook page either.

But Indian news websites likeIndia Today, The Print, Times Now and Scroll.in, along with rightwing propaganda sites like OpIndia and international sites like The Guardian have quoted from the BHUC Twitter account and used their photos and tweets in their stories. The screenshot of the BHUC Twitter handle that BHBCUC had posted on July 16 shows it had 8,476 followers then. BHUC, on its Twitter profile, used the official logo of the BHBCUC, and also falsely claimed to be the official Twitter account of the Bangladesh Hindu Buddhist Christian Unity Council.

This portion has now been removed and the account description has been shortened to “Struggling for the basic rights of Minorities in Bangladesh.”

The Wire has written to Twitter asking how the @UnityCouncilBD account was verified by the social media site when the BHBCUC, whose website it links to, has said it has nothing to do with the account. This article will be updated when they a spokesperson responds.

Dipankar Ghose, advocate and organising secretary of BHBCUC told The Wire, “This puts us in an embarrassing situation. Bangladesh Hindu Buddhist Christian Unity Council has no connection with the twitter account @UnityCouncilBD. We have already told several media outlets in your country that this is not our organisational Twitter account.”

Suvra Dev Kar, a tech advisor to BHBCUC echoed Ghose. “We are not aware who is running the Twitter account @UnityCouncilBD. Around three months ago our organisation had flagged the issue and sent a formal letter to the Bangladesh Home Ministry and Bangladesh Telecommunication Regulatory Commission (BTRC) to take necessary steps.”

A senior Dhaka-based journalist, who is the bureau chief of a news outlet, told The Wire that there is little information on who is behind the BHUC Twitter handle.

“I have been working as a journalist for 19 years, and neither I nor any of my journalist friends are aware of BHUC. For minority voices, journalists in Bangladesh primarily depend on the Bangladesh Hindu Buddhist Christian Unity Council, Jatiyo Hindu Mohajote and Puja Parishad,” he said.

The secretary general of the Jatiyo Hindu Mohajote, Gobinda Chandra Pramanik, also said he was not aware of who ran the BHUC Twitter handle, stressing that whoever was in charge of the handle was “definitely not a prominent member from our community.”

Pramanik further added, “Majority of Bangladeshis are secular. The violence we witnessed is completely political. And some people are taking advantage of the volatile situation to fan communal tension and hatred through social media.”

Fact checking website Alt News on Monday reported that a video from Tripura was falsely shared by the BHUC handle as proof of ongoing communal violence in the country. Alt News also found that the BHUC handle’s earlier had the username @HinduarmysUnity.

Last Wednesday, communal violence flared up in parts of Cumilla and Noakhali districts in Bangladesh after allegations that the Islamic holy book was desecrated. At least seven people died.

On Friday, the violence spread to several other districts of Bangladesh, including the capital Dhaka. On Friday afternoon, the final day of the Durga Puja, a mob of hundreds stormed into the Bijoya Durga Temple in Noakhali district’s Begumganj. 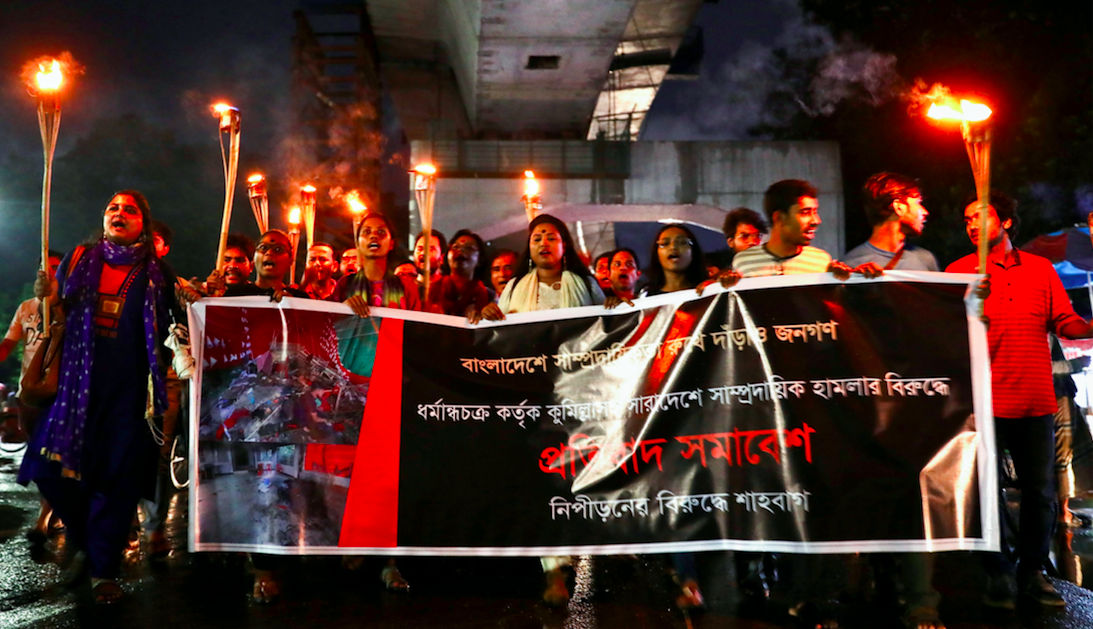 According to reports in Bangladesh dailies, at least 10 temples were vandalised, over 50 Durga idols were desecrated and hundreds of shops and houses belonging to minority communities were looted and set on fire in various locations. The Bangladesh administration took action against the perpetrators; police, Rapid Action Battalion (RAB) and Border Guard Bangladesh (BGB) personnel were deployed to bring the situation under control.

Four Muslims were gunned down by the law enforcement agencies after a violent clash took place in Hajiganj of Chandpur. Clashes broke out in Feni district too, leaving 40 injured including officer in-charge (OC) of Feni Model police station, Nizam Uddin.

Violence broke out first in Cumilla district as a rumour was spread that a Quran had been placed on the knee of a statue of Hanuman in an unidentified Durga Puja pandal. This rumour has not yet been corroborated by the law enforcement agencies.

Even after Prime Minister Sheikh Hasina’s assurance on Friday and the large deployment of security personnel, reports of attacks have continued coming in. The situation, in particular, is tense in Rangpur.