When Political Yogis Take the Knee, They Reveal the Perverse Politics of Indian Cricket

An anti-racist gesture by a team that is keen to toe the line for the government in power, driven by convenience and selfish interests, is a strange sight. 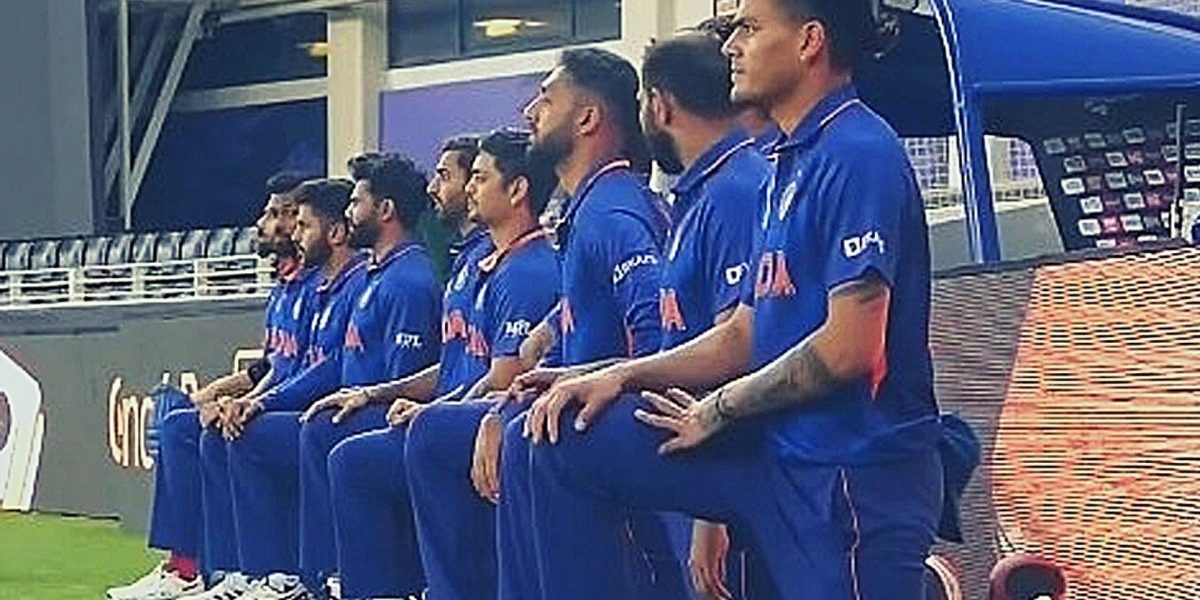 Confusion reigned for a few seconds before the asana could be performed.

The decision had been communicated to the Indian players from the ‘management’, but perhaps the instructions were not clear enough. However, the ‘management’ need not have worried. Although the Indian team had ostensibly taken the field to play a game of cricket, it was adequately prepared to indulge in another game that the players are beginning to master.

As the cricketers took a knee, a nod to the anti-racism gesture that has become commonplace in the world of sport, we were reminded once again at how adept they are at political yoga. Having shown little interest in Black Lives Matter or any other anti-racist demonstration, it was baffling to see the Indian team decide that the World Cup was the moment to start.

No matter Indian cricket’s own chequered history on the question of race, nor did it seem important to consider their own silence on the issues that have violated the fundamental rights of Indian citizens in recent years. An anti-racist gesture by a team that is keen to toe the line for the government in power, driven by convenience and selfish interests? Now that’s a contortion that would put most yogis to shame. The love for yoga among the Modi dispensation, and the administration’s closeness to BCCI, perhaps has elevated its political variant among the preferred choice of bodily expression among the cricketers.

The contortions are splendid. Let us begin with thinking about Indian cricket’s complicated relationship with the subject of race.

In many ways, racial discrimination was built into cricket with colonial logic determining the sport’s character and values that were skewered so delightfully by C.L.R. James. This is indeed why the emotional statement from Michael Holding last year resonated so deeply around the world of cricket.

Indian teams were not immune to the racism inherent in the game, and the racial code of cricket defined the economy, the schedule, and the general organisation of the sport across nations. Even now, in its wealthy state, the Indian side does encounter sporadic moments where its players are the target of racist comments, as we saw earlier this year in Australia.

Also read: Michael Holding’s ‘Why We Kneel’ Is a Strike at the Heart of Racism in Sports – And Society

Yet, Indian cricket itself is not extricated from the circle of racist actions or statements. Writing in his memoirs, Sunny Days, Sunil Gavaskar leaned on racially motivated language to describe a hostile environment in the West Indies.

“To call the crowd a ‘crowd’ in Jamaica is a misnomer. It should be called a ‘mob’. The way they shrieked and howled every time Holding bowled was positively horrible. They encouraged him with shouts of ‘Kill him, Maaaan!’ ‘Hit im Maan!’, Knock his head off Mike!’ All this proved beyond a shadow of doubt that these people still belonged to the jungles and forests, instead of a civilised country… They were stamping their legs, clapping and jumping with joy. The only word I can think of to describe the behaviour of the crowd is ‘barbarian’.”

Gavaskar’s words are not just a relic of bygone days. Indian cricket’s defiant refusal in 2008 to even acknowledge the possibility that the spinner Harbhajan Singh may have uttered a racist term at Andrew Symonds revealed a wilful refusal to engage with the issue, even though fans in Mumbai had been evicted from the stadium only months ago for using the same derogatory term. The issue remains unresolved to this day.

One may consider a more recent allegation by former West Indies captain Darren Sammy who revealed that his Indian teammates at the IPL franchise Sunrisers Hyderabad had repeatedly used a racist nickname for the cricketer. There was no plausible deniability this time around as an old Instagram post confirmed Sammy’s accusation. The cricketers involved did not face any punishment.

Without any serious engagement with this history of racism, Indian cricketers taking a knee in support of Black Lives Matter rings hollow. It appears as a perfunctory nod, a new yoga asana that wishes symbolic actions would help cover up for the lack of reflection on racist attitudes which permeate Indian society. Purity of the soul is apparently achieved here by bending for what is popular in the moment. This was not the first occasion when an Indian cricketer took the knee, as Hardik Pandya had already performed the asana a year ago. 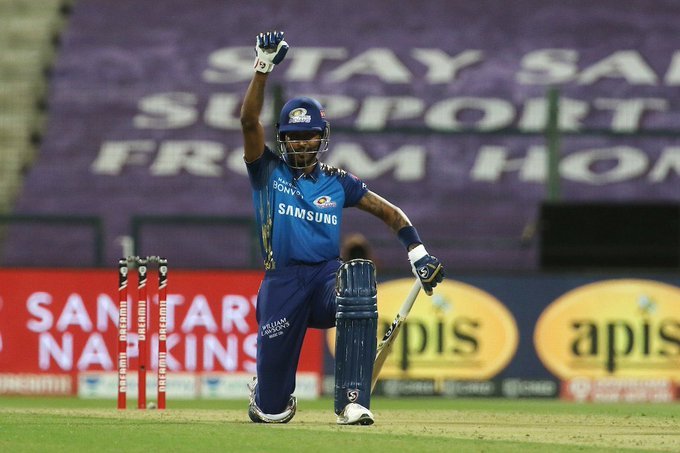 Even in the intervening year, no serious reflection on racism has been forthcoming. So, what was the point? Why parade this brand new yoga on the international stage?

Often, we hear the argument that Indian cricketers do not engage in politics because they are wary of the backlash that they would face if they spoke their mind. We have had occasions where cricketers have refused to share their view on a political issue, as it happened in the case of Virat Kohli when the question of the Citizenship Amendment Act was posed to him.

However, citing ignorance on the matter is not always the chosen response. On the subject of the ongoing farmers’ protest, skipper Kohli did reveal that the team tends to discuss political matters of the day internally without revealing how the discussion went.

We need not worry about being left in the dark, though. Indian cricketers remain keen to speak on political matters and they often go public with their views. Instead of seeing the act of taking the knee on Sunday as a rare excursion on the political pitch, we should notice how often and frequently members of the men’s cricket team assert their political positions.

Over the course of this year, past and present Indian cricketers have been found to publicly celebrate their upper-caste status, and use casteist slurs. The cricketers in question, Ravindra Jadeja, Suresh Raina, Yuvraj Singh, and R. Ashwin, have cared little for the criticism that their statements have invited, barring Yuvraj who was briefly arrested by the police for his remark.

In addition to revealing their caste biases, Virat Kohli, Ajinkya Rahane, and others have also cheerfully tweeted for the Modi government in an orchestrated attempt to counter criticism by concerned citizens and renowned names abroad who had questioned the regime’s undemocratic push for the farm laws. These are just two instances in 2021 alone, but recent years have also seen past and present players utter their opinion on issues like demonetisation and the Citizenship Amendment Act.

So, we find a set of yogis who don a blue jersey sponsored by MPL and Byju’s. It is not just their clothing that stands out, but these yogis also demonstrate incredible dexterity and agility. Anti-racism, caste pride, neoliberal laws, mental health, advocating for the Modi government… It is this crude constellation of political positions that facilitate the various asanas mastered by Indian male cricketers. As is the case with the fashionable variant of Yoga that is paraded as an indigenous sport by the BJP administration, the cricketers’ political asanas show a vapid engagement with the politics of oppression.

It is characterised by a selfish moving of the goalposts to ensure that the cricketers can stay safe in their twisted world. They bring to life contortions of the kind that makes one believe that if their time ever ran out as cricketers, perhaps a life as a yogi would remain a possibility. Or try gymnastics.

Following the loss on Sunday to Pakistan, we learnt of another asana that remains one of the favourite moves of the Indian cricketer. As news of the abuse directed on social media at Mohammad Shami gathered steam, past and current stars demonstrated their trick of turning a blind eye to the issue at hand while ostensibly issuing supportive tweets for Shami. A common theme among those who cared to support the Indian seamer was the celebration of Mohammad Shami’s past achievements, with V.V.S. Laxman arguing that one performance does not define the fast bowler. One wondered whether ten poor displays would make the abuse reasonable.

Mohammed Shami has been a stellar performer for India for eight years, playing a significant role in many a victory. He can't be defined by one performance. My best wishes are always with him. I urge fans & followers of the game to support @MdShami11 and the Indian team.

The matter at hand, of course, was not Shami’s performance. All of the supportive tweets refused to address why indeed was Shami the scapegoat for the loss of the entire team. As the sole Muslim cricketer in the playing eleven, the fast-bowler became the latest target of the abuse and the trolling that is directed at Indian Muslims on social media.

Shami was targeted because he is Muslim, plain and simple.

For the mental gymnasts and the political yogis, this would have been quite easy to work out. But Indian cricketers would not say so. Unlike Wasim Jaffer who had received the support of only Anil Kumble when he was ousted as the coach of Uttarakhand on trumped-up charges of communal bias, at least Shami could count himself fortunate to receive wider support. But only to the extent that the yogis would extend themselves.

The intentional silence on the abuse and violence encountered by Muslims in India, and other issues that may inconvenience their paymasters, is the final piece of this perverse political yoga.

Speaking on matters like race despite showing no serious regret over racist statements, careful elisions and evasions to dilute the discrimination at hand, and a commitment to silence when words of empathy are most needed, has come to define the political manifesto of the current Indian team.

During this year’s Indian Premier League, when international cricketers spoke of the horror-inducing state of affairs due to the second wave of COVID-19, the deathly silence from Indian cricketers spoke the loudest. It was suggested then that the players could not speak, lest they lose their contract with their rich franchises.

Perhaps that is the case, but it should not mislead us to believe that Indian cricketers do not engage in politics because they are wary of the backlash. Caste pride, supporting the Modi government’s damaging policies, even the targeted criticism of their fellow teammate on account of his faith is not a step too far for them to perform their political yoga.

We should not entertain complacency by thinking that it is futile to engage members of the Indian cricket team on politics. Nor are their positions entirely predictable, as the taking of the knee showed. By posing political questions, we are likely to learn where and how the cricketers fall in their latest contortion.

Priyansh is a writer, and a doctoral student researching Hindu nationalism and sport at the University of Toronto. He tweets @Privaricate.