It was third time lucky for the 24-year-old ace shuttler. 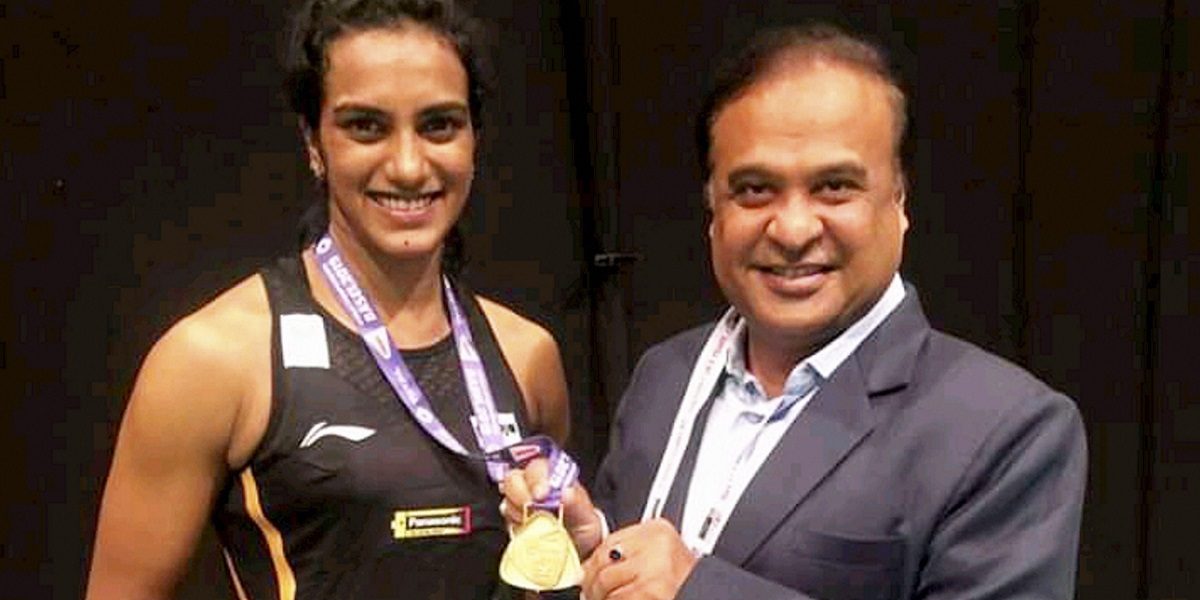 Basel: Badminton star P.V. Sindhu became the first Indian to win the World Championship gold by thrashing familiar rival Nozomi Okuhara of Japan 21-7, 21-7 in one of the most lopsided finals ever.

Two years after losing the gold to Okuhara in an epic 110-minute final that went down as one of the greatest battles in badminton history, Sindhu finally exorcised the ghost of that loss with a dominating win over the same opponent.

“I am really very happy. I have waited for this victory and finally, I have become a world champion,” Sindhu told reporters.

“I have no words to express because I have been waiting for so long. Last time, it was silver, before that it was silver and finally I am a world champion, so I am really really happy. I have been expecting this for a very long time. So I got it finally and I want to enjoy it, feel it.”

It was Sindhu’s fifth World Championships medal – most by a female singles player alongside former Olympic and world champion Zhang Ning of China. She had previously won two silver and two bronze medals.

“This win is special because I am the first woman in India to win gold and I would like to thank everybody out there for their support,” she said.

Sindhu also won an Olympic silver medal in the 2016 Rio games, a silver at the Gold Coast Commonwealth Games, an Asian Games silver at Jakarta and the BWF World Tour Finals last year.

Sindhu credited her coaches for the performance and dedicated the win to her mother P. Vijaya.

“A lot of credit to my coaches, Gopi Sir and Kim (Ji Hyun) and also to my parents, my support staff and sponsors who believed in me,” she said.

“I dedicate this win to my mom, it’s her birthday today. I thought I will gift her something and finally I gift her this gold medal. It is because of my parents that I am here today.”

Highlights | @Pvsindhu1 ?? fulfills a perfect week in Basel securing the first world title of her career ?

It was third time lucky for Sindhu who had lost to Okuhara and Carolina Marin of Spain respectively in the 2017 and 2018 finals to settle for a silver medal twice.

Prakash Padukone became the first Indian to win a medal in the World Championships, winning a bronze in the 1983 edition. Saina Nehwal bagged a silver and a bronze in 2015 and 2017 respectively in women’s singles.

Jwala Gutta and Ashwini Ponnappa also won a bronze in women’s doubles in 2011, while B. Sai Praneeth was the latest to join the club as he settled for a bronze in the men’s singles in this edition on Saturday.

The fifth-seeded Indian, who enjoyed an 8-7 head-to-head lead over third-seeded Okuhara ahead of Sunday’s contest, was simply unstoppable as she dished out an attacking game, racing to an 8-1 lead.

She targeted the deep corners and unleashed her big smashes to win points.

A precise net shot helped Okuhara snap Sindhu’s run of eight straight points, but the latter was back in control when Okuhara went wide, unleashing two smashes to enter the break with a massive 11-2 lead.

Okuhara tried to step up the pace but an alert Sindhu was up to the task. She targeted Okuhara’s forehand corner to take two more points.

Sindhu used her height to produce attacking clears which Okuhara could not negotiate. At 16-2, Sindhu committed a couple of unforced errors before again taking control of the match.

Sindhu eventually grabbed as many as 13 game points when Okuhara went long and she sealed the first game with a body blow which her rival sent out.

In the second game, Sindhu continued her rampaging form, grabbing two quick points before Okuhara earned a point with a cross-court smash.

Okuhara had no answer to Sindhu’s razor-sharp returns. The Indian made the Japanese run to the deep corners with her acute angled returns and then swiftly followed them at the net to make life difficult for her opponent.

Sindhu led 11-4 at the interval in the second game. At 16-4, Sindhu made a couple of errors when she hit long, but that did not matter as she pounced on a weak return from Okuhara and sent it to the backline and then left her rival stranded with another powerful smash.

Sindhu grabbed the match point when Okuhara went long again and sealed the title with a superb return, before throwing her hands in the air in celebration.

With Sindhu’s gold and Praneeth’s bronze in this edition, Indian shuttlers also continued the six-year streak of winning at least one medal in the prestigious event.

The Olympic silver medallist said she approached the finals like any other match and it took the pressure off her as she could produce her best.

“Winning and losing is secondary but for me just going to the court and giving my 100% is very important.”

Talking about the final, Sindhu said, “Usually the Japanese girls play a lot of rallies, so there were long rallies and then I was dominating all of them and from the starting, I maintained the lead and finished it off.

“I had to be alert on court. For me, I had to be prepared for everything, attack or defence. So not any particular strategy against her. It is just that each point mattered to me.

“I was very confident even though I was giving one or two points, then I was getting those points back and finally I did it.”

Asked if the absence of players such as Akane Yamaguchi and Carolina Marin made her path to the triumph easy, she said, “I don’t think so because top one to 15 players are all of an equal standard. It is who plays well on a given day that emerges as the winner.”

Asked about the 2020 Tokyo Olympics, she said, “Tokyo 2020 is not so far but right now it is step-by-step for me. I know the Olympic qualification is going so I hope I do well, but right now I just want to enjoy and don’t want to think anything else.”

Crestfallen after the devastating loss, Okuhara, the 2017 champion, said she just couldn’t match up to the pace of Sindhu.

“Sindhu played very speedy returns and I couldn’t move fast enough. I couldn’t defend. It can happen in sports, this time it didn’t work out,” said the world no. 4 Japanese.

“I have lost matches in other competitions so I know I will have to improve my physical and mental fitness to be prepared for next time.”