Indian Cricket’s Affection for the Military Has Cleared the Boundary

The celebration of militaristic activities isn't new to organised sport, but the Indian team’s current promotion of its sentiments is unprecedented. 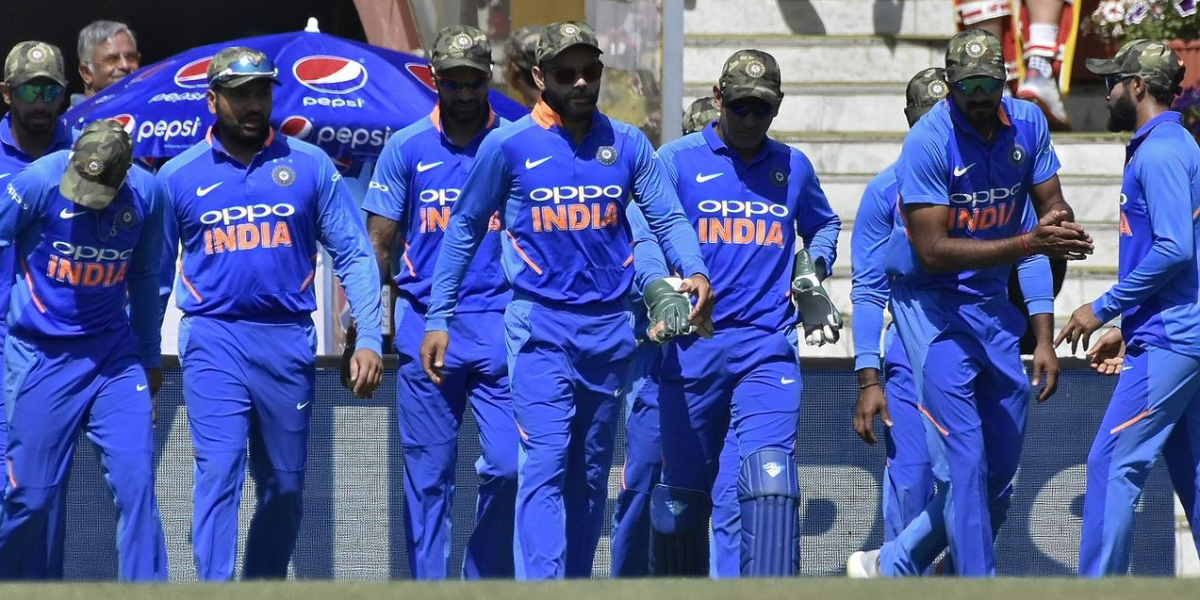 Former skipper Mahendra Singh Dhoni’s word is generally taken as gospel by his teammates in the Indian cricket side. From umpire reviews to field changes, little that he suggests is not acted upon by captain Virat Kohli or others.

So for Dhoni’s final game as an India player in his hometown of Ranchi, in a match against Australia, a suggestion by the honorary lieutenant colonel of the army — the wicketkeeper was conferred the honour in 2011 — was reportedly very much welcome.

For the third ODI against Australia, every member of the team sported camouflage army caps – in solidarity with the CRPF soldiers who lost their lives in last month’s attack in Pulwama. Although India did play two matches after the incident, the decision to switch caps had to wait until the game in Ranchi.

Kohli discussed the decision during the toss: “This is to pay respect to the martyrs of the Pulwama attack and their families. All the players have decided to donate their match fees from this particular game to the National Defence Fund. I, as the captain of the team, would urge everyone in the country to do the same – donate however much they can to the National Defence Fund and help in the education and well-being of the families and the children of those who lost their lives in the attack. So this is a very special cap and a very special game indeed.”

The wearing of the caps – an unprecedented act – is just the latest attempt by the Board of Control for Cricket in India (BCCI) and its cricketers to emphasise their commitment to the armed forces in the aftermath of the attack.

The celebration of militaristic activities is not new in organised sport but the Indian cricket team’s constant promotion of its allegiance to the military is breaking new ground. Currently, there exist very few parallels across sporting disciplines.

In recent weeks, the board and players have appeared to speak from a military manual. Although the International Cricket Council (ICC) snubbed the BCCI’s request to ban Pakistan from this summer’s ODI World Cup, the committee of administrators (CoA) chairman Vinod Rai — the de-facto head of the board until fresh elections are held — insisted that he is not in a mood to relent.

India’s attempt to ‘isolate’ Pakistan does not seem to have found any takers. Yet, players like Yuzvendra Chahal continue to support the demand that India should boycott its World Cup encounter against its arch-rival.

A change in the composition of the CoA also implies a significant shift. The appointment of lieutenant general Ravindra Thodge by the Supreme Court last month was a much-delayed response to the departures of Ramachandra Guha and Vikram Limaye. Ever since the CoA was reduced to two members, it witnessed sharp disagreements between chairman Rai and Diana Edulji.

Thodge’s appointment was made to break the impasse. However, he has been keen to emphasise his record in the military. “It is my first time in cricket, but I have 40 years of experience in the armed forces and I don’t think anybody can compete with that,” Thodge recently told Sportstar.

The BCCI managed to secure the ICC’s permission for Friday’s action as the wearing of army caps was claimed to be a part of “a charity fundraising effort”. Whether raising funds for an institution such as the army is acceptable remains unanswered. In this context, it is worth recalling that the English cricketer,  Moeen Ali, was not allowed to wear “Save Gaza” and “Free Palestine” wristbands by the ICC in 2014.

Cricket, like every other sport, demands the exclusion of political symbols on the playing ground. However, as history reveals, some political symbols are more acceptable than others – a nation state’s armed forces being one.

The less than spotless human rights record of the military and security forces in India did not deter the BCCI or the cricketers. The frenzied valourisation of the forces, which the present government is very keen on, seems to have infected the board too. The decision to wear army caps on International Women’s Day suggested a tone-deaf culture that ignores crimes committed against Indian women by uniformed personnel, most of which go unpunished.

The role of Nike, India’s official kit sponsor, is worth examining too. In recent months, the company has taken the lead in producing anti-establishment advertisements supportive of the political stance taken by African-American athletes and women in the US. Stars like Colin Kaepernick and Serena Williams have featured prominently in the promotional campaign that advocates feminism and speaking truth to power.

But critical scholars remain sceptical of Nike’s political agenda – its stance seems to shift according to the market preferences; the agreement to support the BCCI’s initiative suggests profit alone guides its decision-making.

For the board, though, more serious questions abound when it comes to making cricket inclusive. The BCCI’s rushed suspension of Hardik Pandya and K.L. Rahul was merely a consequence of social media outrage over misogynist remarks made in an interview.

Although the newly-appointed ombudsman, Justice D.K. Jain, is expected to decide on the final punishment for the two soon, the BCCI is hardly inclined to address the deep-lying issues briefly revealed by Pandya and Rahul’s transgressions. No plan is forthcoming to sensitise its contracted cricketers – a small expense for the world’s richest cricketing body. An example might be made out of Pandya and Rahul but the culture in Indian cricket that facilitates casual sexism, as displayed by the two, is likely to escape interrogation.

More importantly, despite the new ombudsman, it is unlikely that the investigation into accusations of sexual harassment against CEO Rahul Johri last year will be revisited. Although a three-member panel set up at the behest of the CoA had acquitted Johri, the opinion of lawyer Veena Gowda was completely disregarded by Vinod Rai. Gowda had recommended that Johri should undergo gender-sensitive counselling. The refusal to welcome a culture of self-reflection by the CoA remains disturbing.

The poor handling of the Johri case, unsurprisingly, lay forgotten as Indian cricketers bandied their affection for the armed forces on International Women’s Day. One should expect further escalation in the coming months, as the vexed question of playing Pakistan at the World Cup will continually reappear.

Which part of the kit will be swapped for military gear next? Perhaps, Indian cricketers will be transported by a MiG 21 to Manchester on June 16 as part of a strategy to intimidate Pakistan. It may sound ridiculous now, but the suspension of disbelief was set in motion some time ago.