What India has delivered in the one-month window between Adelaide and Brisbane surpasses every single historical milestone in Indian cricket. 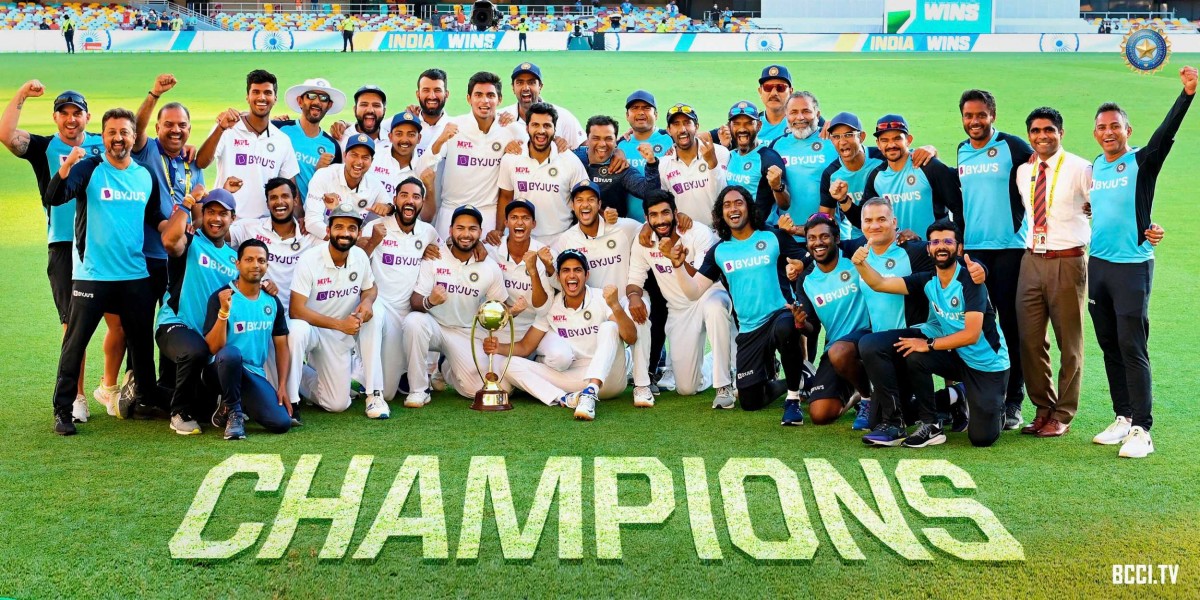 In Christopher Nolan’s 2006 classic The Prestige, John Cutter, a stage engineer played by the inimitable Michael Caine, explains the three critical elements of a successful act of illusion – the pledge, the turn and the prestige. Each is required to be carried out meticulously for the magician to have the desired impact on the audience.

Pledge mainly involves creating an aura where the performer aims to capture the imagination of the audience. Turn is where trickery and deception are involved – a sleight of hand the audience must miss. And finally, it is the element of prestige that delivers the blow leaving the crowd flabbergasted at what they just witnessed. It is important for each element to be executed in the right proportion for the complete act of illusion to come together and deliver the desired punch.

It will not be totally out of place to view what the Indian team has pulled off in Australia over the last one month as something erringly similar to the description Cutter provided for a successful act of theatrics and deception. From the very beginning, the series down under was supposed to be marked by the absentees from the Indian camp. Virat Kohli leaving the series after the opening Test was only half the story. The batting lineup was going to be further exposed with opener Rohit Sharma unavailable for half the series owing to strict quarantine protocols, despite passing the fitness tests just in time. Add to that, Ishant Sharma being ruled out of the tour had considerably brought down India’s fast bowling potency.

Against this backdrop, India suffered its worst overseas humiliation at Adelaide, going 1-0 down in the series. The pledge had been set. You cannot fault the Australians for falling into believing Indians were caught out of depth. With Kohli leaving while the team was in complete disarray, India had revealed its cards; rather revealed the cards it did not hold. No matter what replacements were picked plugging into those holes, no combination of cards was going to amount to a perfect hand. This is the turn that perhaps did Australia in and the deception was so sharp, Tim Paine’s men could not even notice when prestige came and pulled the rug from under their feet.

It did not hit them when Shubman Gill played those glorious drives on the rise on his debut at Melbourne. He kept getting on top of the bounce effortlessly for the rest of the series, almost implying he could not figure what the hype around Test cricket is all about. It did not hit them even when Mohammad Siraj took to Test cricket like a veteran pro. After what could only be described as a heist of a lifetime that India pulled off in Sydney, Australia may well be forgiven for thinking that was the peak of India’s ability to defy the odds with such a physically depleted unit. But one final act of deception was still up Ajinkya Rahane’s sleeve.

1988 was the last time Australia had lost a Test match in Brisbane. There is a reason the feat had not been repeated since. The nature of the pitch suits the Australian bowlers far more than it would their opposition numbers. The venue usually hosts the opening Test of the summer and it takes teams longer to adjust to conditions. And the extent to which the prospect of playing at the venue has been quite mythologised, it perhaps does intimidate teams appreciably. The West Indies team holding the distinction of winning in Brisbane 33 years ago included a fast bowling quartet of Malcolm Marshall, Patrick Patterson, Courtney Walsh and Curtly Ambrose. 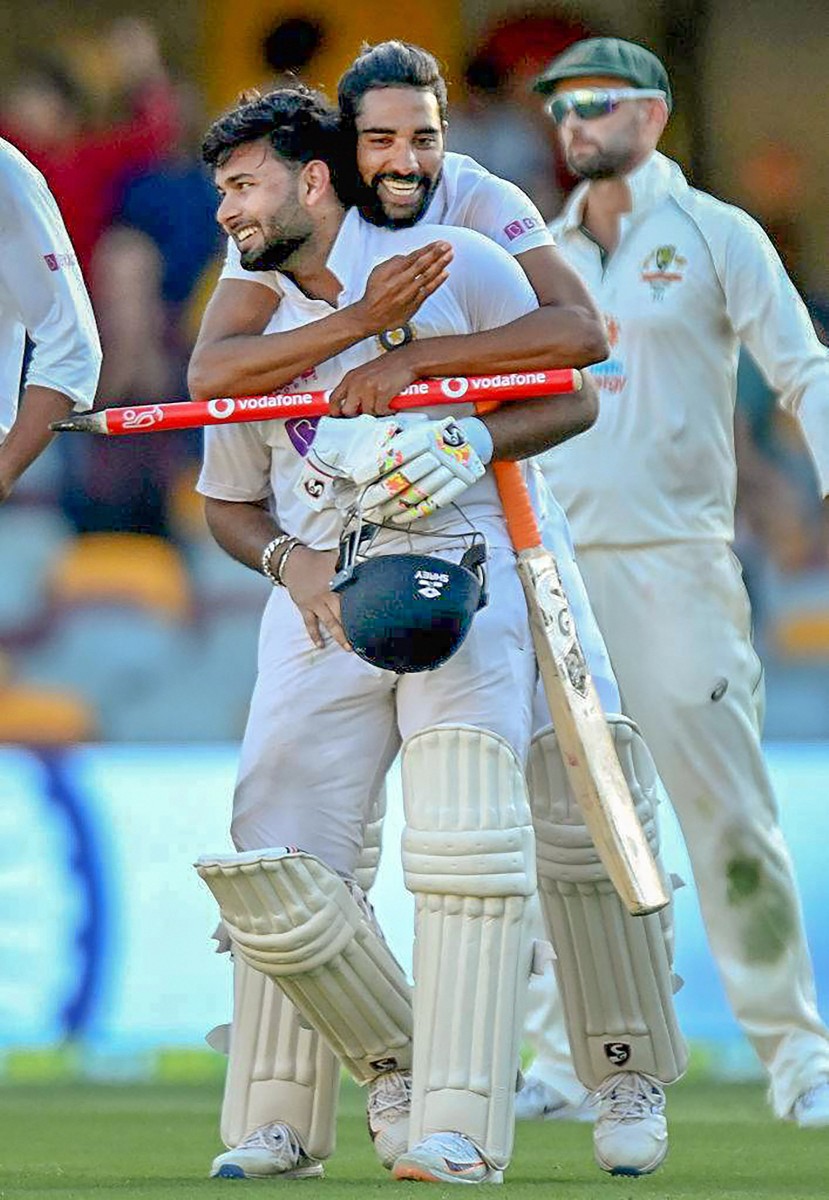 Last week, the lineup India fielded to play the series decider at Brisbane had a fast bowling quartet of Siraj, Shardul Thakur, Navdeep Saini and T. Natarajan – boasting of four Test appearances between them. To add insult to the injury, Australia won the toss and opted to bat on a pitch conducive to strokeplay. At a venue where even the best of opposition attacks have been cut to their size by the merciless David Warners and Steve Smiths of the world, the Indian rookie contingent had no business competing. Some gentle 130 kmph looseners on a true Gabba wicket? Surely, that can’t amount to any serious Test cricket.

And this lack of sincerity in application showed throughout in the way Australians batted on day one. Smith, Marnus Labuschagne and Matthew Wade got out playing what could be termed arrogant shots against bowling they thought was too pedestrian to pay much heed to. And this approach prevented Australia from seizing the opportunity to bat big and bat India out of the contest. What they failed to take into account was India’s batting was still perfectly competent and unlike some of the other visiting teams in the recent past, the Indians are quite adept at handling the extra pace and bounce the Gabba mythology is built upon.

However, despite that, going after a target north of 300 on the final day against a bowling attack as threatening as Australia’s required a serious amount of conviction on India’s part. And contrary to the simplistic narrative that are common feature post a historic sporting achievement, this conviction was not merely a result of some vague psychobabble. India made a very logically sound decision of going for the runs simply based on the fact that their batsmen, bar Cheteshwar Pujara are better suited looking for runs than to dead bat for the entire day. This both increased their chances of survival and never allowed the Australian bowlers to assume complete control of the game.

What was even more fascinating to see was the clarity with which India’s youngest operated. Paying little attention to the weight of the context, both Gill and Rishabh Pant perfectly executed what was asked of them. Both stuck to a plan, focused on wearing the bowlers down, and ensured the possibility of a loss was taken totally out of equation before going for the win. The situational awareness, the technical correctness and the range of shots put on display by both against this level of bowling was illustrative of the kind of quality India’s supply line is churning out at the moment.

A 21-year-old Washington Sundar, without any significant first class pedigree to write about, walking in out of nowhere and looking the part at the biggest theatre of Test cricket confirms the talent nurturing and coaching standards in Indian cricket are absolutely top notch at the moment.

The uninitiated often resort to knee-jerk reactions in the wake of freakish events that would scientifically qualify as statistical outliers. India’s batting collapse in Adelaide was little more than one such outlier. It cannot be a fair reflection of the batting strength of any team competing at this level, let alone arguably the best in business.

And therefore, unfortunately the turnaround India managed since is largely being sold as a story of grit, strength of character, determination, and an underdog achieving the impossible against the odds. While this psychoanalysis would make for a wonderful Netflix documentary that this series deserves anyway, focusing exclusively on the intangibles takes away from a rather boring and strictly cricketing fact that India just simply is a bloody good cricket team and that Adelaide was nothing more than a rather hilarious statistical anomaly.

Similarly, the heist Ravichandran Ashwin and Hanuma Vihari pulled off in Sydney by playing out an entire session to earn a hard-fought draw is one of those outliers unlikely to be repeated if the scenario were to be reproduced in a simulation model. Ashwin rode the collective luck that was denied to the Indian batsmen in Adelaide where everyone simply nicked at every possible wicket-taking delivery bowled by Pat Cummins and Josh Hazlewood.

This of course does not mean the resilience and determination that India has showed throughout the series despite steadily losing half the first choice players deserves no special mention. It must have taken a ridiculous amount of gumption to display such levels of preparedness in the face of unforeseen adversity. But once again, the self-belief and mental strength cannot possibly be sourced from a vacuum. India could believe because even the replacement resources at their disposal were competent enough, for which the domestic structure and the A-team tours deserve a lot more to be written about. 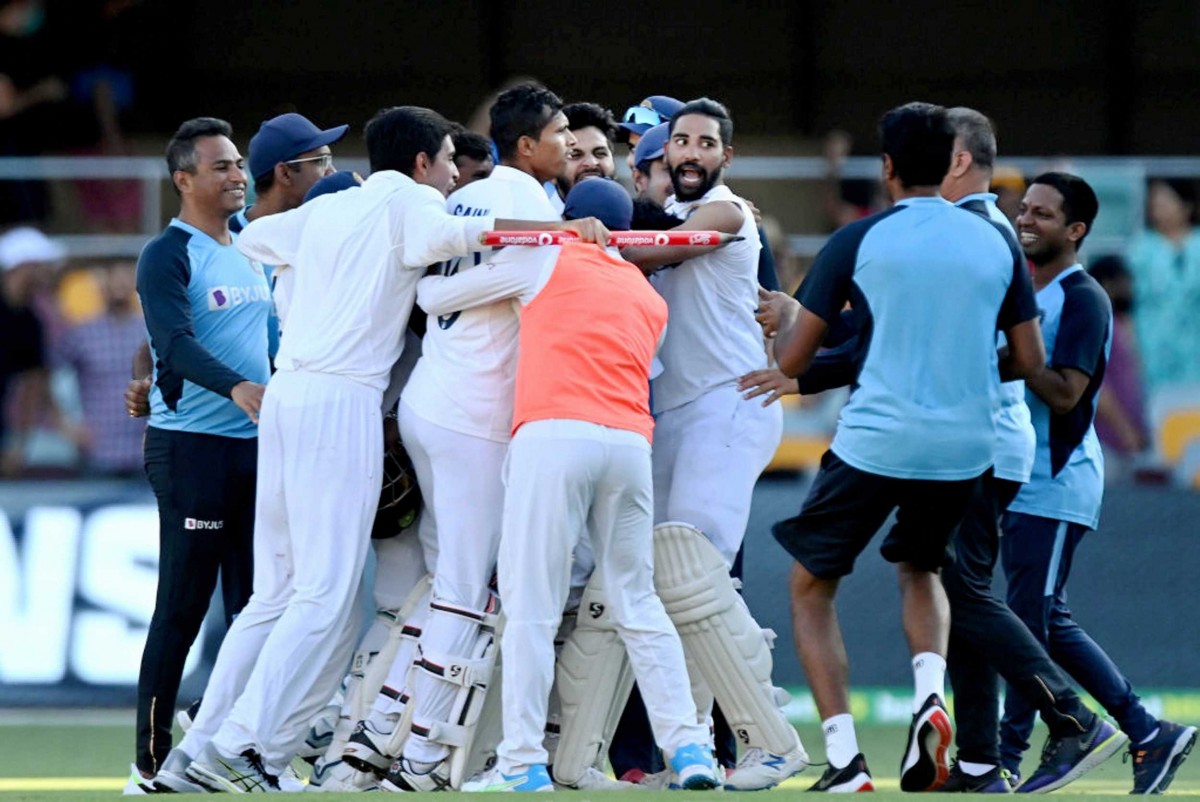 The cultural impression a sporting feat leaves behind, however, is rarely only a function of on-field excellence. It relies a lot more on narrative building and storytelling. The fact that India is no longer perceived as an underdog and is instead a bona fide global cricketing powerhouse makes fans somewhat less invested in the team’s mighty good performances, which are probably on the expected lines. But make no mistake. What India has delivered in the one-month window between Adelaide and Brisbane surpasses every single historical milestone in Indian cricket. It is bigger than the famous overseas series wins of past which were built on one happenstance too many and are quite unlikely to be repeated again under the same circumstances.

This series win, on the other hand, is literally a repeated feat after making history down under with the first ever series win in 2018-19. And in the process India managed to affirm that while the previous win may remain asterisked with Australia missing the fulcrum of their batting, it perhaps would not have mattered after all. This Indian team is now officially Australia’s Achilles’ heel and for the foreseeable future, starts every series down under on equal footing. While seam and swing still remains a concern for this batting lineup, India is no longer fazed by pace and bounce, and Australia will have to start looking for answers in places they perhaps haven’t had to explore to remain dominant at home.

A gripping Test series, at the end of the day, is an exercise in self-indulgence. Very few may get what’s so enjoyable in a bilateral contest with repeated matchups over a month or so at the end of which the teams could actually end up on parity. And it is objectively a very legitimate question to which there is no convincing answer. It is simply just what it is. Those who get it get it and well, too bad for those who do not.

But those in charge of running the sport finally recognised the need of adding some context to Test cricket and devised the idea of a World Test Championship where each team plays a certain number of series over a two year cycle at the end of which, the top two teams play a final. It is not the worst idea in the world. It brings in at least some pretence of uniformity of scheduling in a sport heavily lopsided favouring three teams compared to the rest. It may even add some sense of buildup and context for casual fans.

But the sheer aura of a high-profile bilateral series still remains just as much in place. At the end of this series, for instance, India has perhaps all but confirmed its place in the final of the Test championship expected to be held later this year. And while Australia still remains in the running, their chances have now taken a big hit.

But ask Smith and Cummins if the prospect of losing out on a spot in the final has even crossed their mind yet and chances are they might’ve very well forgotten what a Test championship is. And the answer would not be too dissimilar from the Indian camp, still in the hangover of their greatest series win. There is still no other sporting experience that comes close to replicating the intensity and thrill of a month-long repeated matchups between two high quality teams. There is nothing like Test cricket.