For Refugees in Germany, Football Is About Bonding and a Future

FC Lampedusa St Pauli is a team made up entirely of refugees, who have found a place they can call home on the football field. Hamburg (Germany): On a football pitch in the heart of Hamburg, several languages could be heard through the drizzle of persistent summer rain. From the sidelines, the coaches shouted instructions in German, while players urged passes in Farsi (Persian). There were snatches of Arabic, and a cheer of “FC Lampedusa St Pauli” when the ball thudded into the net, echoed by the sparse crowd of viewers. I was at a tournament featuring what may be the northern German city’s most unusual football team, composed entirely of refugees.

The team’s name draws from the events of 2013, when around 300 people arrived in Hamburg from the Italian island of Lampedusa. Many were of West African origin, fleeing the war in Libya. Not all were welcome, and the authorities made attempts to deport them. But around 80 people found shelter and support in the proudly punk locality of St Pauli. “The football team came up almost by accident, because many people used to play back in their countries,” says Nico, one of the team’s coaches. They had the help of popular professional team FC St Pauli, known for its trenchant anti-fascist, anti-racist views. (The club’s jerseys declare ‘Love Football. Hate Fascism.’) By 2014, FC Lampedusa had hit the fields, with a slogan that said it all: ‘Here to play. Here to stay.’

The club is now formally affiliated with FC St Pauli, retaining its original name even as members have changed and grown in geographical range. In the match that I watched, the players on the field had made their way to Hamburg from the Balkans, Afghanistan, Iran, Iraq, Eritrea and Somalia. The tournament was a series of friendly matches with other teams associated with FC St Pauli.  In the grey gloom of the day, the team’s red and yellow kits offered a welcome splash of colour.

Now something of a city fixture, FCLSP offers a view of what it is like to be an asylum seeker in Germany in the aftermath of the “refugee crisis” of 2015. The friendly playoffs I watched were unfolding in the backdrop of forced deportations of refugees to countries that had been deemed safe to return, including Afghanistan. The rising relevance of the AfD (Alternative für Deutschland), a right-wing party, has been squarely pegged on Germany’s acceptance of close to a million refugees. Most recently, Chancellor Angela Merkel has been under attack from her interior minister, Horst Seehofer, over her immigration policy. All of this makes it a charged time to be playing football in a refugee team.

Additionally, there is the disappointment of Germany’s shock exit from the FIFA World Cup. “It was my choice to support them because I live here now, I like the culture and you become integrated,” said Fernando, 40, who came to Hamburg to escape the violence in his native Colombia. Mahdi, 18, who hails from Afghanistan, also spent a sleepless night after the upset. “They were the champions, they should have gone further.” But like his friends, he found reasons to continue watching the matches. For Simon, 18, from Eritrea, it was time to cheer the player he had styled himself after. “He is the big Neymar of Brazil, I am the small Neymar of FC Lampedusa,” he grinned, showing off his haircut. Barring these preferences for teams and players, for most of the young men I met, football was one of the rare spaces in their lives free of borders and barriers.

The small field, where the team played the semi-final of the friendly tournament, lies in the shadow of the FC St Pauli stadium, between a Second World War-era bunker and a former slaughterhouse turned shopping mall. For Rexhep, 24, this is one of the places in Hamburg where he feels most at home. He discovered the team through a friend in the refugee camp, where he arrived from Kosovo in 2015. “It made me really happy to come here and be able to laugh and play with my friends,” he said. “It is a place where I can forget everything and be free.” For others like Mootu, 20, who survived the difficult journey to Germany from Somalia, the team provided a network for finding his way into his new home. “I learned German through football,” he laughed. “I heard and repeated the words for off-side and penalty and goal.” In the past three years, the team has played in various anti-racist tournaments. 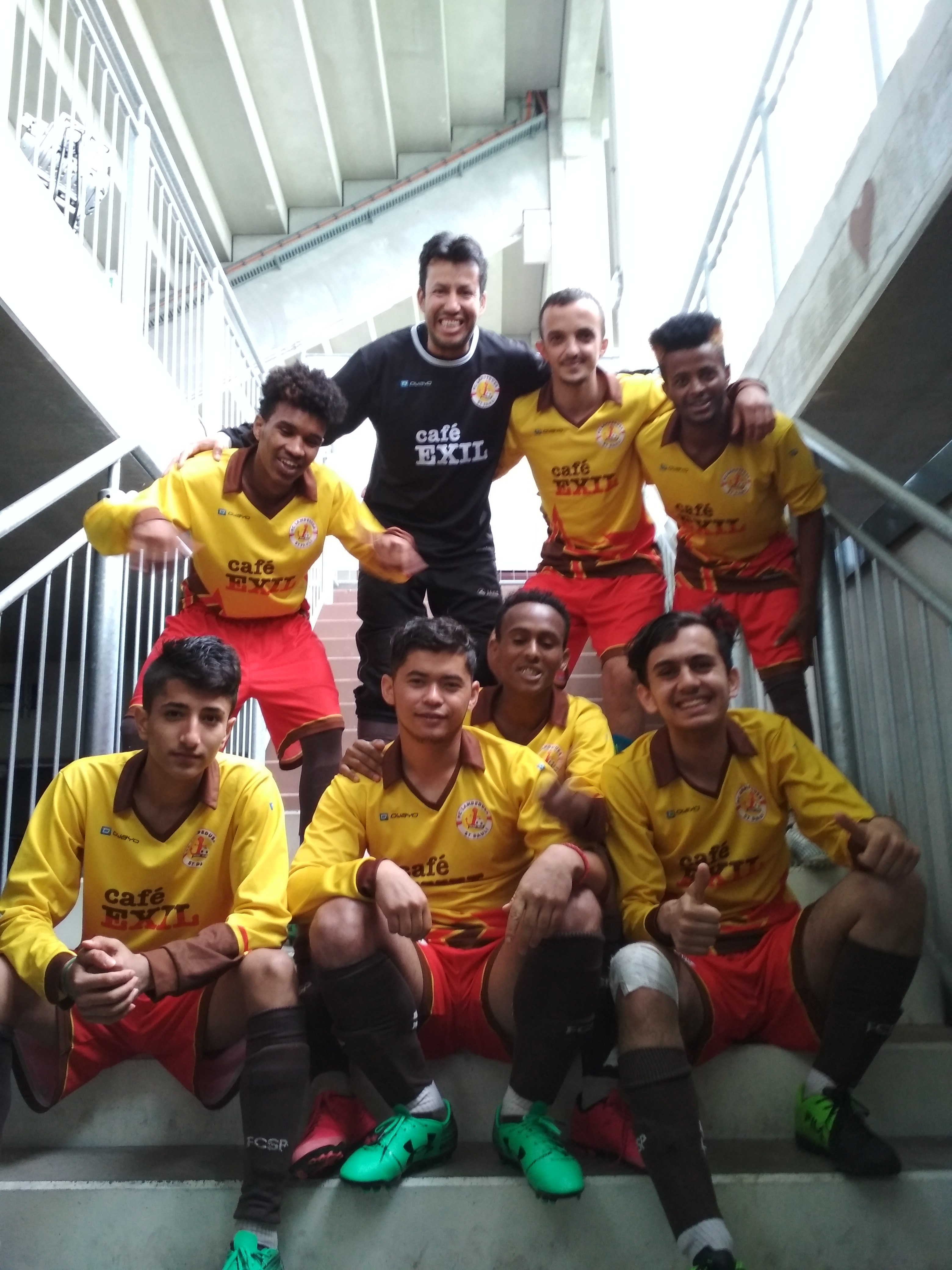 As the game heats up, language is the first barrier to fall away. Fernando called out to his friends in a medley that mixed German with Arabic and Persian endearments and exhortations. “I even taught my Spanish friend in Barcelona to say ‘habibi‘,” he says. It was easy for him to learn from his friends, because “We are all joined by football. It is a universal language”. The oldest member of the team, Fernando, has been playing for FCLSP for three years and holds a job making deliveries for an organic coffee brand. Many of the younger boys go to school. Like Simon, who is due to finish classes in a few days. Once the result is out, he will “Maybe study more, maybe work.” He would like to be an auto mechanic, he said, but didn’t know what the future holds. For both Simon and Fernando, despite the differences in their lives, football is an important part of the future they would like to make for themselves in Germany.

“There is no divide of religion or language here, or where you are from,” explained Rexhep, referring to the playing field. “We are like brothers, like a family.” For him and many others, football is where they find respite from the pressures of their lives, and being away from their loved ones. “What is football in my life? It is happiness, ” he says.

For Hagar, one of the coaches present on the field, the very existence of the club is a triumph. “We are like a bubble against politics, a kind of family, in our own world.” But over  the years, the team has witnessed changes that reflect the shifts in the lives of its players, and in attitudes and policies around asylum seekers. Some have been caused by players who stopped coming as they pursued studies or jobs. Others have been caused by unhappier circumstances. “Some of our players were deported, others left on their own before they were forced to go,” says Nico. When this happened, the entire team went to say goodbye. “We try to stay in touch, and send money so they can play football wherever they are,” she added. “We try to talk about these stories so that people understand how big the impact is, not only on those who leave but those who are left behind, who get frustrated about their uncertain future.”

And then there are more recent arrivals like Armin, a 17-year-old Kurdish player who joined the team six months ago. “There will be people who come to Germany from elsewhere and who will not be able to join a regular football team when they don’t know the streets, or the language,” said Hagar. “There will be a need for this kind of group that says ‘Everyone is welcome’.”

Nico and Hagar are part of the five-member coaching team that is composed only of women. All of them have a long history of playing together too, as part of the first women’s team of FC St Pauli, in the 1990s. So when they were asked to help build the team of asylum seekers, they agreed. “We knew we could do it, because we had already done it once,” says Hagar. Having only women as trainers has not caused any trouble with the players. “But other male coaches often have ideas or suggestions for us,” she adds dryly. As a response, they have come up with an inviolable rule: “Shut up and play football.”

This  training seemed to have paid off on that wet afternoon, as the team powered through the tournament. The rain continued to fall in fine sheets, and despite a hard fight, the Lampedusa team met with stiff opposition, and eventually lost the final. The other players marched into the pavilion, but Simon sat dejected on the grass. Finally, one of his opponents  from the winning side helped him up. He smiled, shook hands and looked at the sky. “Tomorrow,” he said, the word both a promise and a prayer.

Only the first names of players and coaches have been used on their request.

Taran N. Khan is an independent journalist based in Mumbai. She is currently in Germany as a Robert Bosch Stiftung Media Ambassador.