No football culture in Europe is completely immune to racism and discrimination. 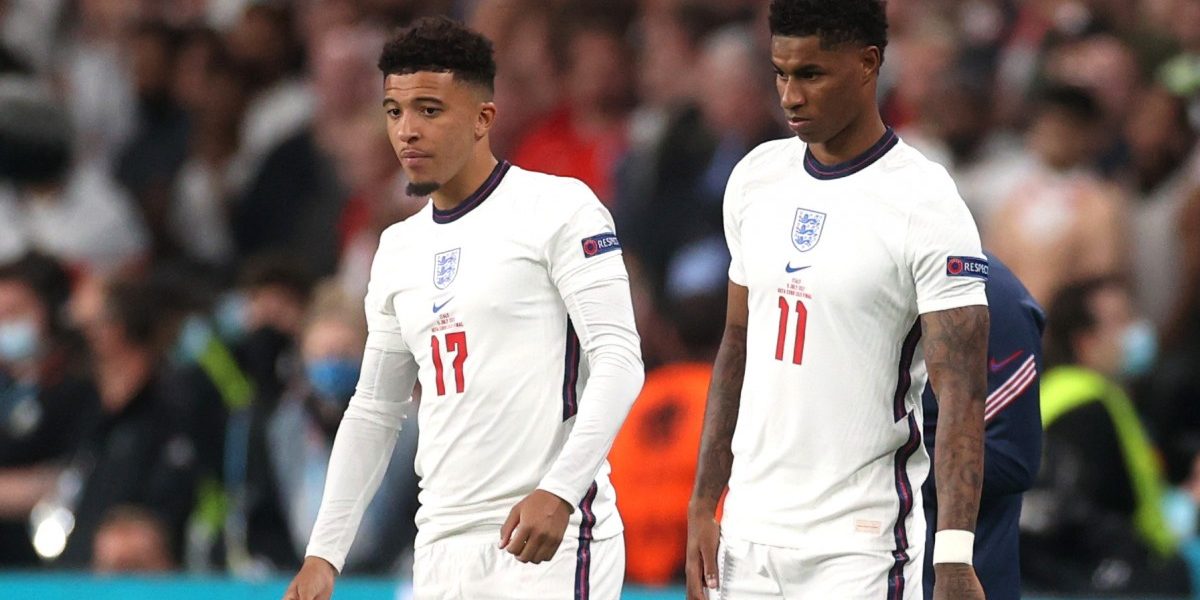 Penalty shootouts are at the very least a very cruel method to determine the outcome of a closely fought football contest if not an entirely unfair one. There are no perfect techniques to ensure the ball is put past the goalkeeper’s reach. Powerfully taken shots carry the risk of hitting the crossbar or even fly into the stands. Moderately taken ones might not meet the back of the net if the keeper jumps in the right direction. The pressure a striker undergoes while taking a kick during the shootout is unimaginable with the stakes being so high. A lot of it is often plain dumb luck and there’s a reason even the best in business have missed penalty kicks at the biggest of stages while staring into the prospect of elimination.

Once the final of the Euro 2020 (the insistence on calling it that in 2021 makes no sense) between England and Italy went into the penalties, there was an uncomfortably familiar air around the setting. Italy had been the slightly better team during the 120 minutes played but there wasn’t all that much to choose between the two sides. And the penalties would inevitably lead to one team having to deal with agony and despair despite having come so close to touching the glory.

England arguably were under more pressure in front of a packed Wembley stadium and under the weight of the enormous buildup to their entire campaign. Despite the early advantage they gained after Italy’s Andrea Belotti failed to convert his kick, England went on to lose the shootout with Marcus Rashford, Jadon Sancho and Bukayo Saka missing theirs.

None of the three players had started the final. Two of them had only been introduced as specialist penalty takers. The opinion is fairly divided on whether the England manager Gareth Southgate made the best possible selections for such a high-pressure situation. Three very young members were trusted for the job while leaving out some of the more senior and seasoned ones. However, the moment Saka missed the final kick of the shootout and Italy players broke into their celebrations, anybody even remotely familiar to the political climate in the present-day England would have immediately sensed the greater danger.

Other than being substitute players who missed their kicks on the night, what unites Rashford, Sancho and Saka is the colour of their skin. And it was only a matter of time before the inevitable discourse began. Minutes after the game ended, star England cricketer Jofra Archer sensing the urgency of the matter posted a tweet urging fans to not racially abuse the three players. But much like many of his tweets in the past, Archer’s words proved prescient once again. 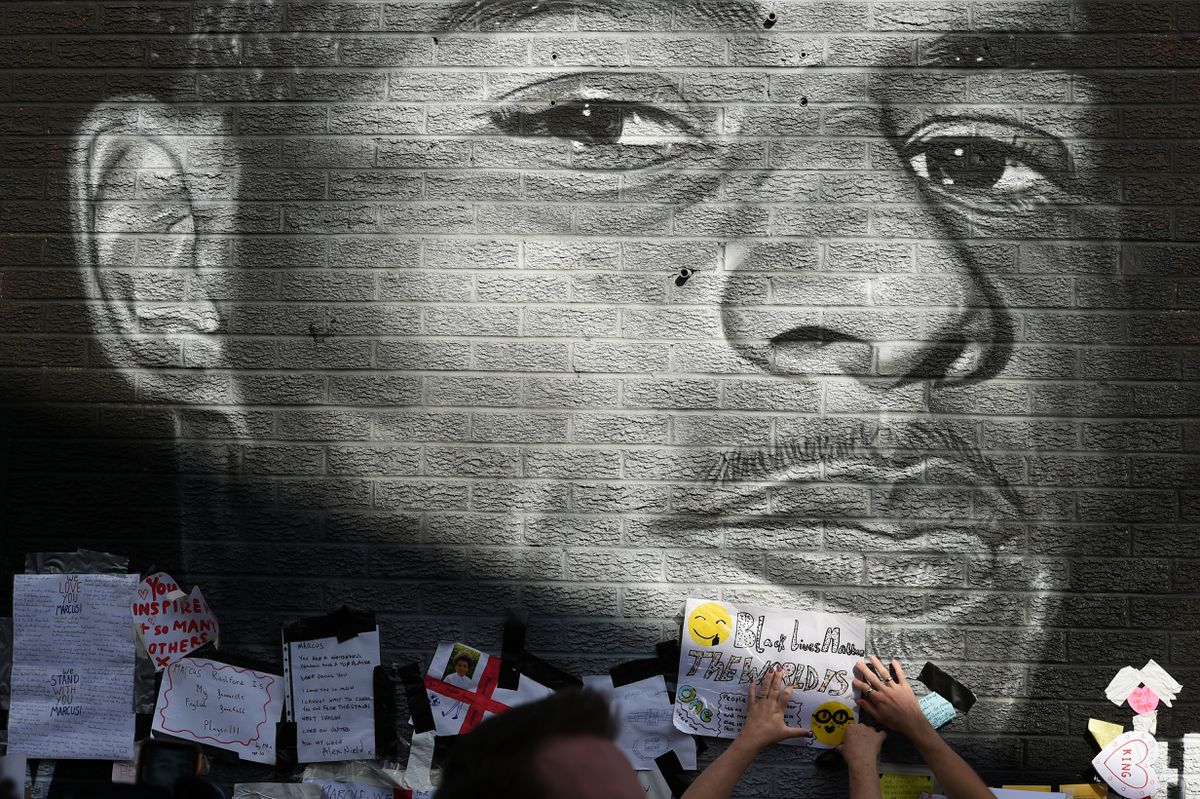 People attach a message of support on the Marcus Rashford mural after it was defaced following the Euro 2020 Final between Italy and England. Photo: Reuters/Peter Powell/File Photo

The racial abuse reserved for the players was unhinged, but not one bit shocking. The English society was anything but unconditionally united behind their players once they decided to take the knee making a powerful statement against ‘discrimination, injustice, and inequality’. The gesture has strong political connotations and has very effectively been used by athletes highlighting the social malaise of systemic racism. The England team however had to significantly water down the gesture fearing public reactions. Southgate had to assure the press the players were not promoting any specific political cause on the football field. Having to be defensive of the gesture in itself signalled what was to follow.

The players were booed and hooted at by large sections of England fans when they took the knee and this raucous behaviour was practically endorsed by no less than Prime Minister Boris Johnson and home secretary Priti Patel. It is quite rich of both to now very conveniently condemn the racist abuse of players but even the most committed of Tory voters will find it hard to sell that their leaders didn’t know what was coming.

England went on the have a dream run as the tournament progressed, and this political divide had gone off the headlines briefly as the nation saw a very realistic chance of the team bringing home glory after 55 years. But it doesn’t really take much to rally behind your players when they are winning. The moment they faltered, the worst of the post-Brexit English society reared its ugly head out.

Speaking to Sky News a day after the final, former England and Manchester United defender Gary Neville very eloquently expressed his anger highlighting how deep the rot runs. Mincing no words whatsoever, Neville went on to hold the very top leadership in the country accountable for almost encouraging the public behaviour to stoop to this level. However, despite his impassioned monologue on the issue, one will be hard-pressed to overlook Neville himself helping normalise boorish behaviour of the English crowd when he said he found nothing wrong in the fans jeering the opposition team’s national anthem.

Throughout the tournament, sections of England fans had jeered the opposite teams’ anthems being played at the Wembley stadium – specifically of Scotland, Germany, and Denmark. There was widespread criticism of such disrespectful behaviour and the UEFA was even forced to penalise England’s FA (Football Association). Neville though found it no big deal and preferred to let it pass as something that fans do when charged up. He was in good company as former England cricket captain Michael Vaughan echoed the sentiment. 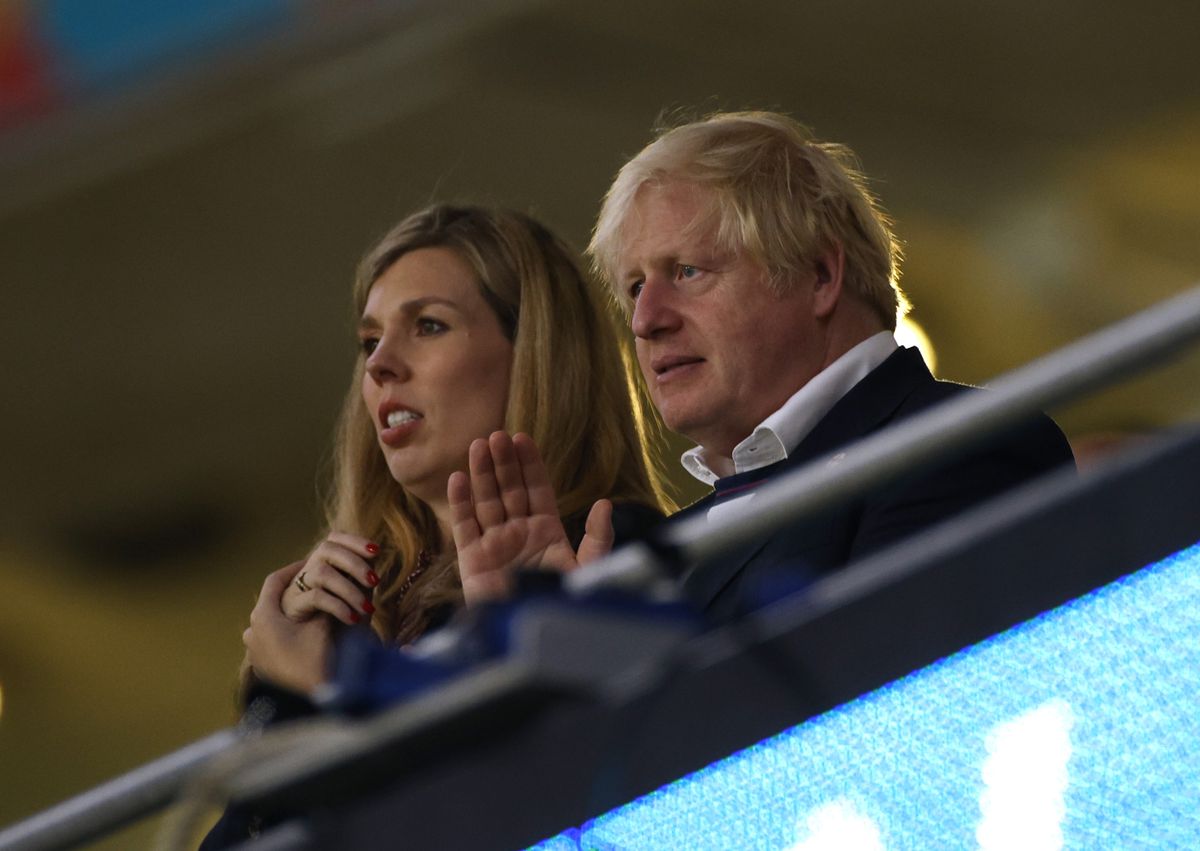 Of course, the behaviour didn’t find a universal acceptance. Southgate had himself distanced the team from such deplorable conduct of fans. Former greats of English football Geoff Hurst and Gary Lineker too had strongly expressed their disapproval. But when public figures with influence in media attempt to pass off such unruly practices in the name of banter, it should then surprise no one to see it culminate into a full-fledged act of hooliganism by fans that saw Italy supporters getting physically attacked.

The racial abuse of players and physical attacks on rival fans aren’t completely detached from each other. Both stem from a place of deep sense of nationalistic entitlement, which breeds sentiments of ethnic and racial supremacy. This fosters and abets a culture where immigrants are inherently frowned upon or at the very least are expected to be grateful for the largesse they have been offered. In this worldview, it is only reasonable for Rashford, Sancho and Saka to face racial abuse should they fail in their ‘duty’ to England; for England has already done more than its fair share by letting them have a shot to play at the highest level.

Unlike some other places in Europe though, such blatant racism isn’t all that mainstream in England yet and it reflects in how even a Conservative government is at least publicly having to condemn it in strong words. Things aren’t quite the same in the backyard of the European champions Italy. Among the least diverse of all major European teams, Italy has had a far greater and far more severe problem of on-field racism. Several players in the Italian Serie A have been targeted with the most distasteful chants by the crowds.

But it becomes even worse in Italy where even fellow players fail to offer unqualified solidarity to their teammates. The star Italian centre-back Leonardo Bonucci had resorted to in part blaming his Juventus teammate Moise Kean when the latter got racially abused by the fans of Serie A club Cagliari. FIGC, the Italian football federation is among the most lackadaisical authorities at cracking down on racism and other forms of player abuse by spectators.

No football culture in Europe is completely immune to racism and discrimination. Even a country as progressive Germany has had the Mesut Ozil episode in recent years. Ozil who is of Turkish origin remarked his ethnicity is inevitably highlighted when he fails to meet expected standards. Again, his German teammates were anything but united behind Ozil when he made public his grievances. The French team, heavy on immigrants of African origin, has had to deal with racism too after their star player Kylian Mbappe recently missed a penalty resulting into France’s elimination from the Euro 2020.

This maliciousness that is ever so commonplace in football fandoms is almost rewarded by those who attempt to normalise it in the name of passion. It is almost as if fandoms are somehow not pure enough if they aren’t borderline problematic. The behaviour of England fans post the team’s defeat in the final is a result of politics of ethno-nationalism, racial supremacy, and toxic masculinity; all of which is tolerated to the point they start seeping into the places where the entire world can see how primal a society can really be when emotionally charged.

It then becomes about protecting a country’s international image and empty words condemning the specific acts follow. That sanctimony though is of very little consequence if the society continues to refuse looking into the rot that’s brewing within. And Johnson and Patel perhaps really need to look into what they are helping flourish and thrive right under their noses. Some introspection certainly won’t hurt.