According to sources, the satellite's second orbit-raising manoeuvre was executed at 10.51 am on March 30 but contact with the machine was lost about four minutes later. 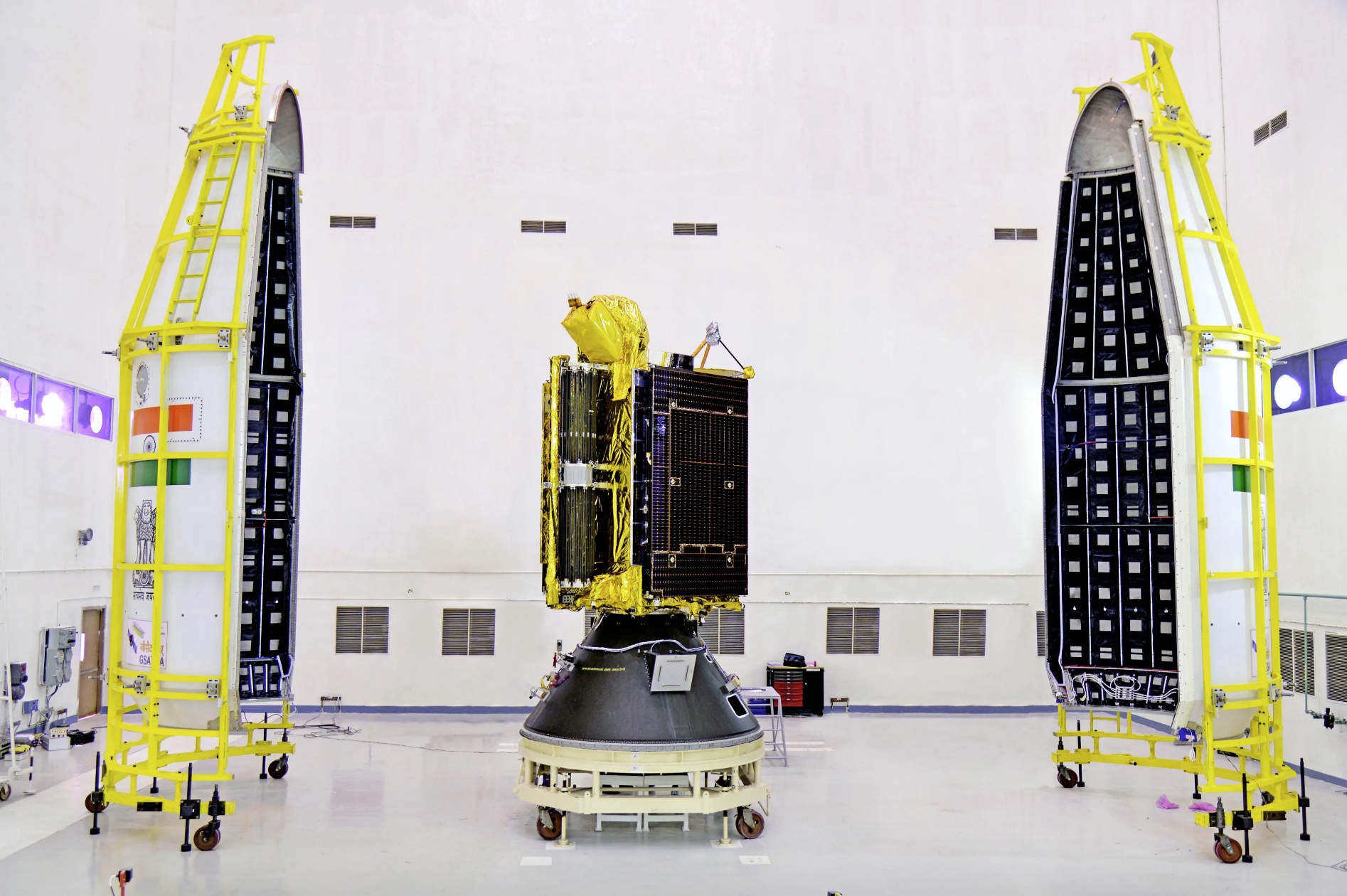 GSAT-6A seen with two halves of the payload faring of GSLV F08, ahead of the mission's launch on March 29, 2018. Credit: ISRO

Bengaluru: The Indian Space Research Organisation (ISRO) launched its GSAT 6A communications satellite onboard a GSLV Mk II rocket on the evening of March 29. However, by the early hours of April 1, reports began to trickle in that ISRO had been unable to retain contact with the satellite. At noon, ISRO confirmed that there was an issue, although it didn’t say much else. Sources at ISRO confirmed that the organisation had not been able to establish a link with the satellite as of 7 pm.

The GSAT 6A was injected into an elliptical orbit by the Mk II rocket’s upper stage at an altitude of 254 km about 18 minutes after liftoff. This was to be followed by the satellite performing three orbit-raising manoeuvres to attain a final altitude of 36,000 km in a geosynchronous orbit.

An ISRO communiqué quickly acknowledged that the first manoeuvre had been successfully performed at 9.22 am on March 30. However, the second orbit-raising manoeuvre, scheduled to be performed at 11 am on March 31, was not followed by a confirmation from ISRO until the morning of April 1, raising suspicions.

According to sources, the second manoeuvre – executed by firing the satellite’s liquid apogee motor (LAM) – was executed at 10.51 am on March 30 but contact with the satellite was lost about four minutes later.

The communiqué published at noon April 1 said, “After the successful long duration firings, when the satellite was on course to normal operating configuration for the third and final firing, scheduled for April 1, 2018, communication from the satellite was lost”.

The Times of India reported that ISRO chairman K. Sivan had subsequently “chaired a marathon meeting” on March 30 even as ISRO confirmed that personnel were at work to “establish link with the satellite”.

NDTV cited “people in ISRO with direct knowledge of the matter” to say that the issue was a “serious setback”. The report also echoed speculation on spaceflight fora that the problem was centred on a power systems anomaly.

However, no word has been forthcoming from ISRO about the root cause of the problem and how it would, or wouldn’t, affect the satellite’s other components.

The last satellite built by ISRO to have suffered a similar anomaly was the INSAT 4B, launched in March 2007. The problem rendered half its transponders useless and forced ISRO to make corrective design changes in the GSAT 8 satellite launched in May 2011.

Some observers also noted that the GSAT 6A’s first burn of the LAM, for the first orbit-raising manoeuvre, had been significantly shorter than the corresponding burn of the GSAT 6 (a.k.a. INSAT 4E) satellite, launched in August 2015: 2,188 seconds v. 3,385 seconds.

At the same time, there has also been an overarching trend towards firing the LAM for shorter periods for orbit-raising manoeuvres.

Finally, against rumours that the launch of the IRNSS 1I satellite would be postponed should the GSAT 6A link loss be confirmed, sources at ISRO assured that that wouldn’t be the case. The IRNSS, for Indian Regional Navigation Satellite System, satellite of iteration 1I has been set for an April launch to replace the IRNSS 1A satellite.

In early 2017, the failure of a timekeeping system onboard had rendered the 1A unusable for precise geolocation services. A first replacement satellite, IRNSS 1H, could not be injected into orbit in August 2017 after a release mechanism onboard the PSLV rocket’s uppermost stage failed and couldn’t eject the satellite.

The GSAT 6A weighs two tonnes, has a planned life of 10 years and has been catalogued by ISRO as a “high power S-band communication satellite”. The “high power” – facilitated by a large antenna – allows the satellite’s signals to be received on ground through smaller, possibly handheld devices. The Defence Research and Development Organisation has been working on supplying security forces in remote areas with such devices.