It's from the instrument called MENCA, whose designs are based on the CHACE instrument on board the Chandrayaan-1 mission to Earth's moon in 2008. 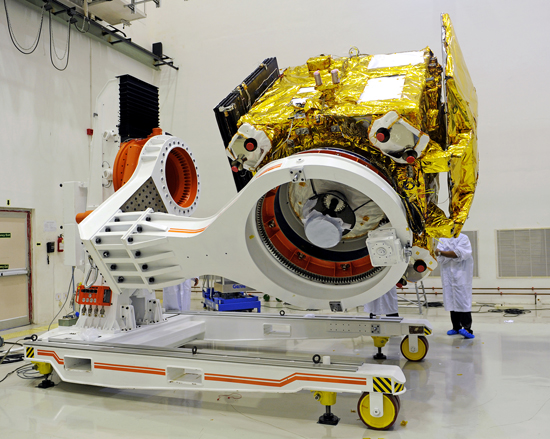 The first scientific result from an instrument onboard India’s Mars Orbiter Mission probe to the red planet was published on February 19, in the journal Geophysical Research Letters. The publication comes after multiple calls have been made for the Indian Space Research Organisation, which operates the probe, to release results and data obtained by it.

The Mars Orbiter Mission, or MOM, was launched by a PSLV XL rocket in November 2013. After a series of complex manoeuvres around Earth, the probe was swung on its way to Mars, around which it got into an eccentric orbit in September 2014. The orbiter was packed with six scientific instruments, altogether able to study the Martian atmosphere and surface characteristics. However, by January 2016, ISRO had been able to release only high-definition pictures taken by MOM – no scientific results seemed forthcoming. One ostensible reason provided for this was that MOM’s primary mission was as a technology demonstrator, and that scientific studies would follow after the mission was completed.

Anyway, this is why the newly published result is cause for some celebration. It is from the instrument called Mars Exospheric Neutral Composition Analyser (MENCA, named for the nymph Menaka from Hindu mythology), whose designs are based on the CHACE (Chandra’s Altitudinal Composition Explorer) instrument on board the Chandrayaan-1 mission to Earth’s moon. In September 2015, MOM’s orbit was temporarily decreased in altitude, bringing it within 260 km of Mars’s surface as opposed to the usual low of 400 km. In the process, MENCA measured how the concentrations of carbon dioxide, nitrogen, carbon monoxide and oxygen vary with height.

According to a blog post on The Planetary Society, “MENCA has come up with flying colours”. Its success has also been touted as vindication for the CHACE instrument, whose discovery of water on the moon in 2008 wasn’t accepted for publication by many journals. The discovery itself received recognition only when another result from a different instrument from Chandrayaan-1 reached the same conclusion. Now, Syed Maqbool Ahmed, part of the team that analysed CHACE results back then, writes in the same post, “MENCA’s triumph on Mars means Lunar CHACE was correct.”

Apart from confirming results obtained by other probes studying Mars, MOM continues to be relevant for the debate on whether the red planet’s surface and atmosphere contain sources of methane; the relevant instrument is the Methane Sensor for Mars. Methane is considered to be a biomarker – a potential (but not definitive) sign of life, which some scientists think may once have existed on the planet. But apart from the odd spikes in data, methane’s presence has not been confirmed.