The Falcon 9 has seven other missions this year, excluding the ones for AMOS 6 and NASA, and at least three of which have time-bound expectations riding on them. 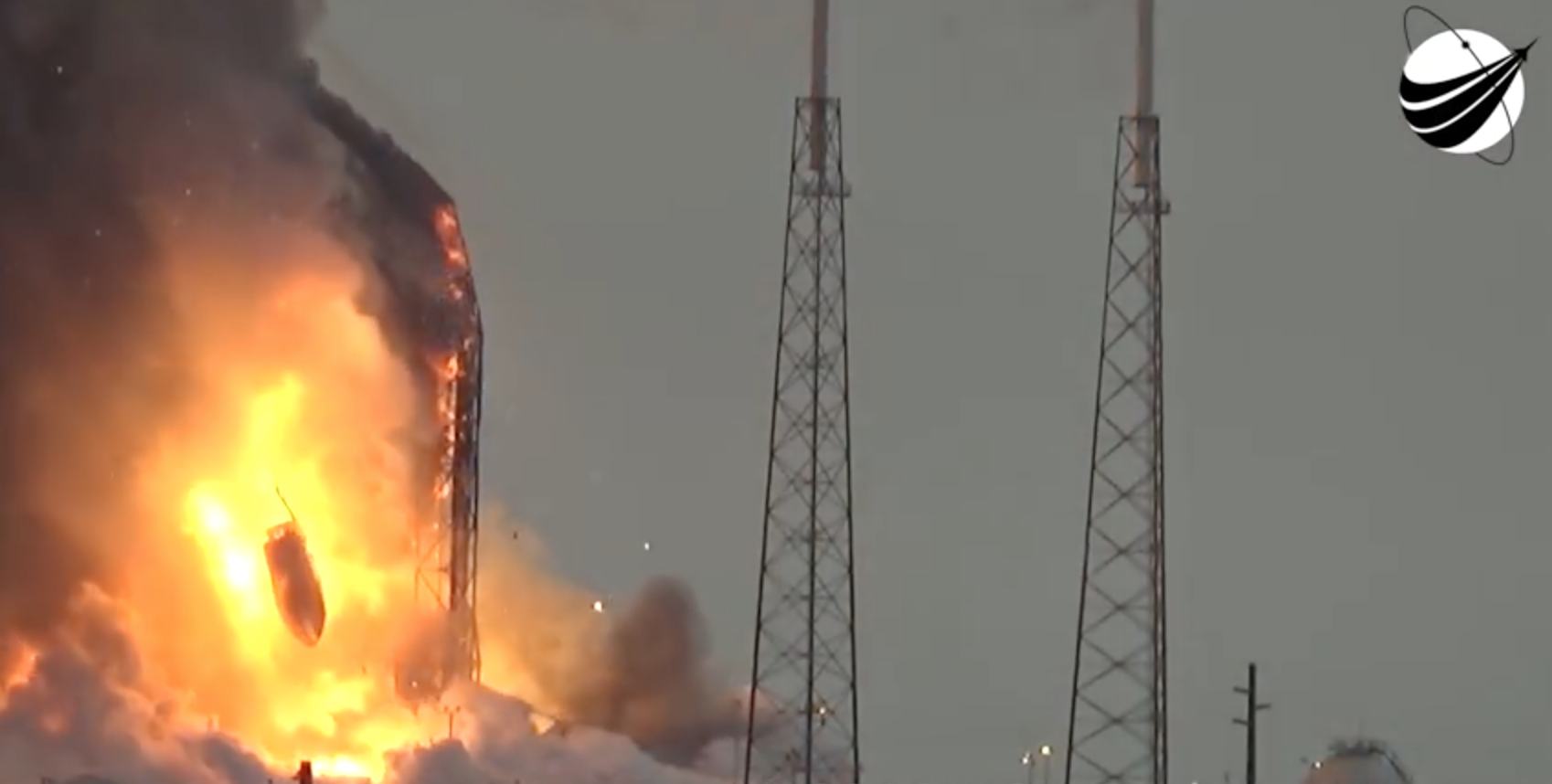 A Falcon 9 rocket goes up in flames at Launch Complex 40, Cape Canaveral, on September 1, 2016. Source: YouTube

A SpaceX rocket blew up on its pad at Cape Canaveral, Florida, a day before it was set to launch. It was carrying a $200-million Israeli satellite and supplies to the International Space Station. SpaceX CEO Elon Musk had tweeted that the explosion was triggered by an issue with the rocket’s upper stage, although final details will take at least six months to emerge. The mishap has many implications for the private space-launch company, most notably for the Israeli satellite-maker Spacecom, SpaceX’s relationship with NASA, its competition with Boeing and its assurances to the wider business community.

There’s also been an implication for Facebook. The social networking company was going to lease some of the bandwidth from the Israeli satellite, AMOS 6, to improve internet connectivity around Africa. However, this loss is relatively minor in comparison to what else SpaceX stands to lose: its reputation of being reliable and state-of-the-art at the same time. In fact, speculations were rife that a new rocket refuelling technique, concerning the upper stage Musk tweeted about, it has been testing since 2015 may come to be implicated in the accident.

The rocket, a Falcon 9, is at the heart of SpaceX’s plans to expand its offerings – up to building a super-heavy launch vehicle and taking humans to Mars within the decade. However, achieving these objectives behooves the company, led by Musk, to constantly innovate and bring launch costs down. Most recently, the company’s engineers have been able to demonstrate that the first stage of the Falcon 9 could return to land on the surface in an upright position after launching the second stage into orbit. The reusability saves SpaceX millions of dollars as well as eliminates the need to build it again for a subsequent mission.

Last year, the innovation also took the form of changing the nature of the propellants carried by the rocket. SpaceX is currently developing its Raptor cryogenic engine. However, unlike other cryogenic engines (including ISRO’s), where oxygen is cooled to really low temperatures at really low pressure, the Raptor will be fed really cold oxygen at really high pressure. The difference is that the oxygen contents in the tank become more dense, allowing the tank to hold more oxygen in a given volume. This in turn frees up space for the fuel (liquid methane), and increases the distance the rocket can travel as well as the amount of payload it can carry. According to SpaceX, the increase in density is of the order of 8%.

However, loading such a mass of oxygen into the tank before each mission has been a recurring problem for SpaceX. In 2014, a Falcon 9 rocket carrying an SES-9 satellite took off only after four failed attempts one week, three of which involved issues with the propellants. Unless SpaceX perfects the attendant techniques, it is going to be neither reliable nor state-of-the-art, at least as far as heavy lift missions are concerned.

Another suspect is the launchpad itself, the one called Launch Complex 40 at Cape Canaveral. A video made available by USLaunchReport.com (below) shows extensive damage caused to it by the explosion, including to the strongback, the steel tower supporting the rocket. Such damages typically take many months to fix, and until then that’s one less launchpad for SpaceX. However, if the launchpad had been poorly maintained and if it turns out to be that the explosion was triggered by something on the ground, then SpaceX can deflect criticism away from the Falcon 9. It could also use the nearby Launch Complex 39A, but which will only be ready for use in December 2016.

Had the September 1 explosion not occurred and the Falcon 9 taken off today, the AMOS 6 civilian communications satellite would’ve been placed into a geosynchronous orbit around Earth and taken over duties from its predecessor, the AMOS 2 that ends operations this year. However, AMOS 6’s loss means that Facebook will terminate its contract with Spacecom, the company that built the satellite in a deal with the Israeli Aerospace Industries, by January 1, 2017. More significantly, Spacecom’s being acquired by the Beijing Xinwei Technology Group for $285 million has also been called into question after the explosion sent shares of the former down by more than 9%.

SpaceX has contracts worth $10 billion for commercial satellite launches as well as NASA missions, at least $7 billion of which involve the Falcon 9. Apart from this, the company also has two deals with NASA: one worth $1.6 billion to fly resupply missions to the International Space Station and another worth $440 million to build and modify the Dragon, a capsule that NASA hopes to use in the future to send American astronauts onboard American rockets to space (between two and six missions). The agency currently leases slots on Russian rockets.

The resupply mission had been slated for November, at least as of June 2016. NASA has had to grapple with three delayed resupplies in the recent past. On October 28, 2014, an Antares rocket operated by the private company Orbital ATK crashed seconds after liftoff on October 28, 2014. In April 2015, a cargo module launched by a Russian Soyuz 2-1A rocket tumbled out of orbit and burnt up in the atmosphere before it could reach the ISS. In June 2015, a Falcon 9 rocket blew up a few minutes after takeoff. Musk later blamed a steel strut that collapsed under 2,000 pounds of pressure against the 10,000 pounds a supplier had claimed it’d be able to withstand.

The uncrewed and crewed test flights of the Dragon capsule had been slated for May and August 2017, respectively. However, the September 1 explosion will have thrown the schedule off whack. And the blowback won’t be from NASA alone.

NASA also has a contract with Boeing to fly two to six crewed missions for the agency, and with a maximum potential value $1.6 billion greater than its contract with SpaceX ($2.6 billion). The terms of the contract allow Boeing and SpaceX to “own and operate the crew transportation systems and be able to sell human space transportation services to other customers in addition to NASA, thereby reducing the costs for all customers”. At the same time, these services are required to be ready in 2017, when the US plans to eliminate its reliance on Russian launchers. A failure on SpaceX’s part to keep up with this schedule, and ensure the reliability of its Falcon 9 rocket by then, could increase NASA’s reliance on Boeing.

It can seem good for SpaceX that its failures are happening now, not when the bigger crewed missions come along. However, its road to reliability is not its road alone but a journey it undertakes along with all of its clients. SpaceNews reported that the Falcon 9 has seven other missions this year, excluding the ones for AMOS 6 and NASA, and at least three of which have time-bound expectations riding on them. What we can be thankful for are the repeated tests and countdowns every operator performs before launches, how much these tests drive up launch costs, and how these are the costs that aren’t being cut. After all, #SpaceIsHard.