Chandrayaan 2 in Limbo as ISRO Loses Contact With Lander, History on Hold

A brutal reminder that space is hard 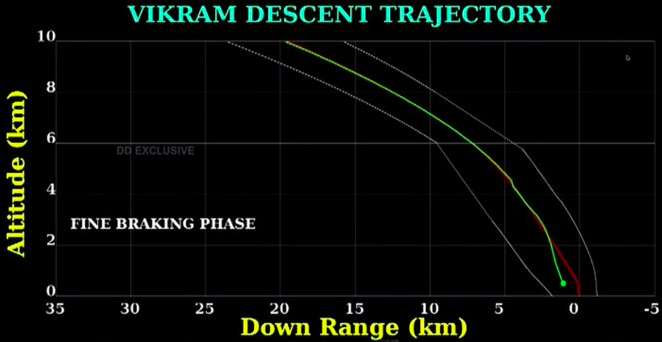 The deviation in the altitude-range plot that triggered initial concerns about the Vikram lander's fate. Photo: ISRO

Shortly before scientists of the Indian Space Research Organisation (ISRO) were slated to receive a confirmation from the Vikram lander of the Chandrayaan 2 mission, they lost contact instead.

There was little clarity about what had happened over the next 30 minutes or so before it became clear that one of the lander’s engines experienced an anomaly and the lander is likely lost. This said, it is important to remember neither ISRO nor its chairman K. Sivan have issued an official announcement yet.

It is unclear when they will divulge more information about what exactly happened. The organisation has cancelled the press conference originally scheduled for around 9 am tomorrow, during which Sivan was to address journalists.

It would seem – for now – that the Chandrayaan 2 mission is on hold and the outlook is bleak. The entire mission cost Rs 978 crore to execute, following nearly a decade’s worth of work.

The anomaly manifested when the Vikram lander was coming down onto the lunar surface by firing a thruster as a way to slow down its autonomous descent. When it was about 2.1 km above the surface, however, the communications link it had with antennae Earth went silent.

Soft-landing on the Moon is no mean feat and there is no shame whatsoever in failing at it. Space is hard, sometimes brutally so.

Prime Minister Narendra Modi, who was present at the mission control centre until reports of the anomaly emerged, reportedly asked the scientists present to “be courageous”. Modi’s address to the nation at 8 am on September made it sound like the mission’s lander/rover parts had failed.

Sivan had said around 2:30 am that he and his teammates were analysing data received from the Vikram lander in an attempt to determine exactly what had gone wrong, and presumably to determine if the mission could be revived.

Independent experts attempted to discern the cause of the problem based on telemetry data displayed on screens at the mission control centre, and rendered visible in the backgrounds of videos telecast on ISRO’s official YouTube channel and on Doordarshan, the state TV channel.

According to their reading, one of the engines powering the Vikram lander didn’t perform as expected, causing the lander to tumble and veer away from its nominal trajectory. While this interpretation hasn’t been confirmed, the extent of damage suffered by the lander and the rover aren’t known either.

For now, the orbiter of the Chandrayaan 2 mission is functioning normally – and is expected to for the next two years or so. It carries a set of eight instruments, all together weighing 2.3 tonnes, that will continue their studies of the Moon.

There have been some rumours that the orbiter, or alternatively NASA’s decade-old Lunar Reconnaissance Orbiter, could be used to photograph Vikram on the lunar surface. However, considering Vikram’s path deviated from the one that had been plotted out for it, this effort may not succeed.

The Wire will publish new information as and when they become available. To get a sense of the events as they happened, check out our live-blog below.