A Pre-Launch Review of Chandrayaan 2

This is India's most complex robotic mission to date.

A model of the Chandrayaan 2 rover being tested at ISRO's simulated lunar soil facility. Image: ISRO

The Chandrayaan 2 mission is set to lift off on board a GSLV Mk III rocket at 2:51 am on July 15, on the rocket’s M1 mission, from the Indian Space Research Organisation’s (ISRO’s) spaceport in Sriharikota.

There is a tremendous amount of details surrounding this one mission, with good reason: it is India’s most complex robotic mission to date. A PSLV launching a hundred satellites into different orbits pales compared to what is going on here.

For example, the rocket itself has been fit with the new CE20 cryogenic engine, whose development began in 2002 and which completed its integration full-duration hot test in 2017. Though it is one of the most powerful such engines in the world, many people seem to think that makes the Mk III a very powerful rocket. It is not. It is a medium-lift launch vehicle. There is the heavy-lift class above it – the sort of vehicle we will need if we are going to regularly undertake human spaceflight and lunar payload missions. Note here that the Falcon 9 costs as much as the Mk III but can carry a heavier payload, so ISRO’s cost-cutting has a way to go.

An interesting point: the CE20 engine in the C25 cryogenic upper stage also flew on the Mk III D2 mission, which launched the GSAT-29 satellite in November 2018. GSAT-29 weighs 3,423 kg and was injected into a slightly less elliptical orbit than Chandrayaan 2 will be. However, a comparison of the two (planned) mission profiles shows the engine burns to be of slightly lesser durations on the Mk III M1 mission. This indicated upgrades but their nature is unclear.

What about the mission?

The 3,877-kg stack called Chandrayaan 2 is an assemblage of three units: an orbiter, a lander and a rover. The last two are called Vikram and Pragyan, respectively. This is the mission sequence: 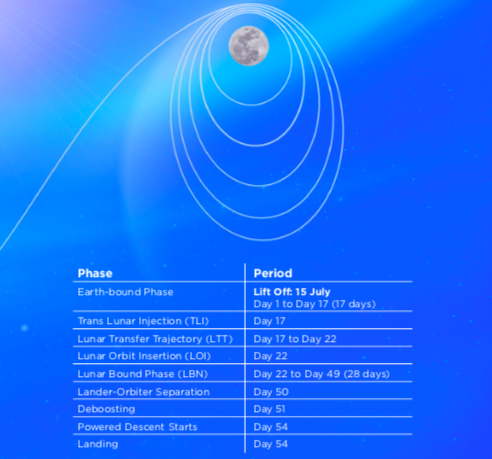 Jatan Mehta wrote a comprehensive article for The Wire Science about the important specifics of this mission (plus some trivia!).

For some additional details:

And no matter what anyone tells you, Chandrayaan 2 is NOT going to the Moon to look for helium-3. These speculations were put to rest (or so one would believe) in a Lok Sabha Q&A that transpired in July and December last year.

Virat Markandeya dug deeper into why the batteries are the principal limiting factors on this mission, for Indian Express. Vikram and Pragyan will land at the dawn of a lunar day and execute their tasks. At dusk, their batteries will power down and hibernate for the night – but they might not wake up the next morning. Reason: the lunar night is so cold, reaching temperatures of -180º C, that the batteries might not be able to warm up again.

To quote from an older blog post by this author:

This illustrates an easily understood connection between fundamental research and its apparent uselessness on the one hand and applied science and its apparent superiority on the other. Neither position is entirely and absolutely correct but this hierarchy of priorities closely parallels the practices of the populist politics that privileges short-term gains over benefits in the longer run.

It may not seem worthwhile to fund a solid-state physicist who has, based on detailed physicochemical analyses, fashioned for example a new carbon-based material that can store lithium ions in its atomic lattice and has better thermal characteristics than graphite. It may seem even less worthwhile to fund researchers probing the obscure electronic properties of materials like graphene and silicene, writing papers steeped in abstract math and unable to propose a single viable application for the near-future.

But give it 20 years and a measure of success in the otherwise-unpredictable translational research part of the R&D pipeline and suddenly, you’re holding the batteries that’re supposed to be installed on a Moon rover and need to determine how many instruments you can pack on there to ensure the whole ensemble is powered for the whole time they’ll need to conduct each of their tests.

Sandhya Ramesh and Mohana Basu compiled an interesting ‘Talk Point’ for The Print, about what gains we can expect from Chandrayaan 2. Somak Raychaudhury, the director of the Inter-University Centre for Astronomy and Astrophysics, Pune, makes an important point in there, that these interplanetary missions are important first-steps, and he also reminds us that they can’t just be about national pride. Springboarding off his comments: Chandrayaan 2 cannot, and should not be allowed to, coast on the pride factor. As a science mission, it needs to deliver on the science and ISRO needs to be seen to be delivering it: data in the public domain (no one-picture-per-week business), scientific papers, technical reports. Both the Mars Orbiter Mission and Chandrayaan 1 have been relative flops on this front (see this discussion, for example).

Also for The Print, Narayan Prasad of SatSearch analysed a commercial prospect: “A comparison of the capacity that these companies are trying to establish with ISRO’s Chandrayaan 2 points to some early evidence that India’s space agency may be able to offer a better price-performance” in terms of carrying payloads to the Moon.

M. Ramesh recalled the tense moments before Chandrayaan 1 lifted off in October 2008 in a report in BusinessLine. The oxidiser, a highly poisonous substance called nitrogen tetroxide, leaked through a fault in the connection between the oxidiser tank and a pipe, engulfing the rocket in a pink smoke that had to be cleared away asap before the fault could be fixed). Let’s hope nothing goes wrong tonight, but let’s also remember to not be surprised if something does: the Mk III is much more complex as a rocket than the PSLV, and lunar soft-landings themselves have had a historical success rate of around 50%, according to Shubashree Desikan’s report in The Hindu.

Surely our mission will be a success?

Assuming today’s lift-off mission will be a success, July 15 will be a historical date; the more significant thing will happen on September 6/7, when the lander will attempt to descend gently on the Moon and when (four hours later) the rover will roll out. Unlike what ISRO usually does, this is a longer duration multi-step mission with a lot that needs to go right (and a lot that can go wrong). This isn’t an effort to be a downer but simply remembering that we are far from done isn’t exactly the same as declaring failure, or even criticism for that matter.

Can I watch the launch?

Sure. Here are some important links:

A kind soul has set up a countdown for you to time yourself (in case you aren’t one of those people at the new Launch View Gallery tonight).

By the way, people in Chennai: you will be able to watch the launch from your rooftops, although not in much detail unless you have a pair of binoculars or something better. As for the photographers: if you take good pictures, please consider placing them in the public domain, since the ownership and distribution rights over ISRO images are vague. I would very much like to emblazon a good image on a tee for myself!

The contents of this article were originally published as a Twitter thread.