Trajectories followed by other space agencies in the past suggest that the third test – following atmospheric reentry and pad abort – will be the ascent abort. However, we don't know if or when that will happen. 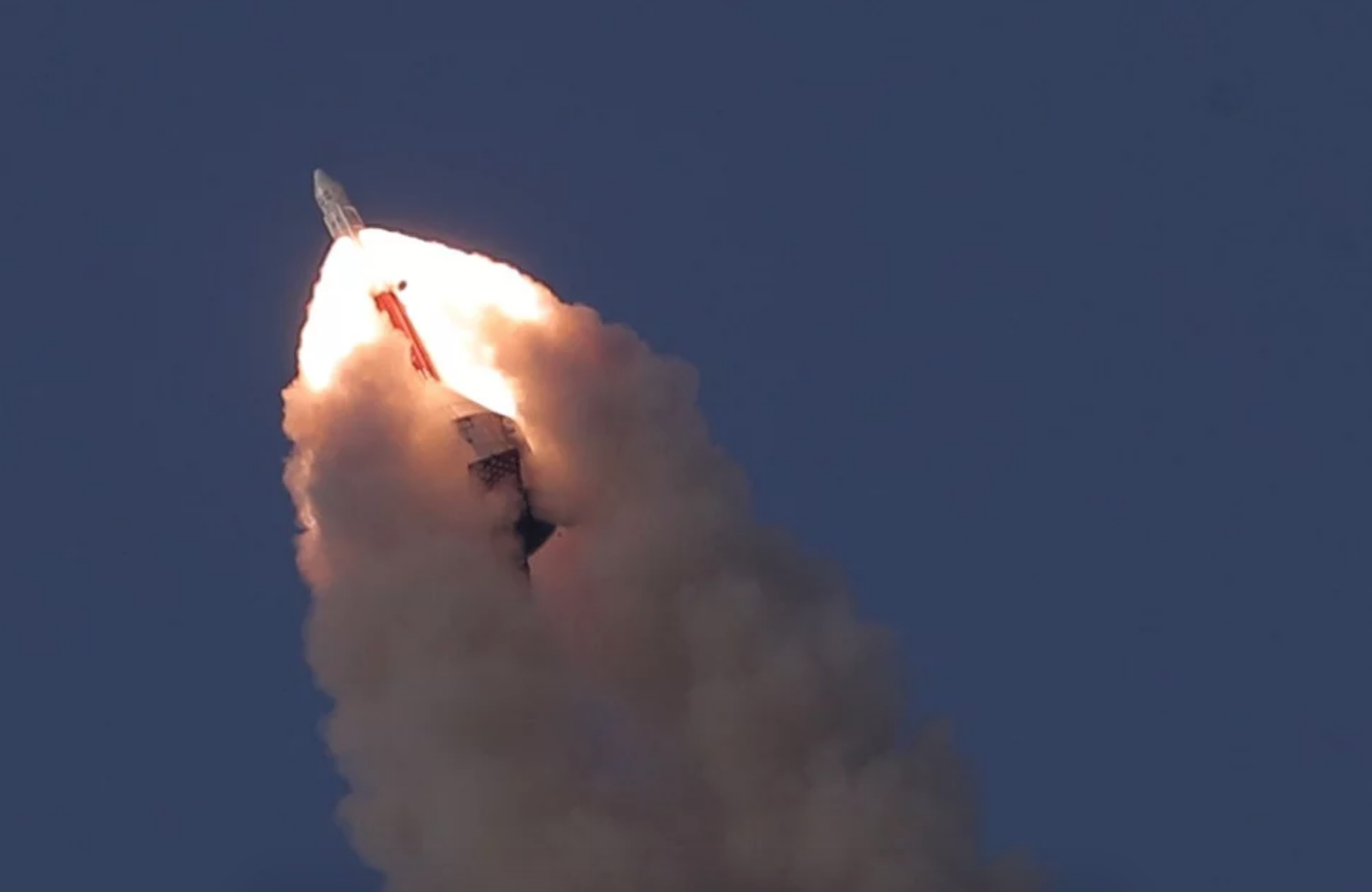 On July 5, the Indian Space Research Organisation (ISRO) conducted “the first in a series of tests” to qualify a module of its human spaceflight programme from its launchpad at the Satish Dhawan Space Centre, Sriharikota. The test was of a crew escape system (CES). According to ISRO, it is “an emergency escape measure designed to quickly pull the crew module along with the astronauts to a safe distance from the launch vehicle in the event of a launch abort” while the rocket was on the launchpad itself.

In all manned missions to space, the crew module – essentially a container housing the astronauts – is installed on the rocket’s uppermost stage. ISRO’s latest test, called a pad-abort, checks whether an escape system installed on the crew module can take it away to safety should the rocket malfunction on the launchpad itself. While the crew module, rather the spacecraft that it’s a part of, has its own engines, these aren’t powerful enough to propel it away within Earth’s atmosphere, necessitating the use of a separate escape unit.

The exercise was designed such that, at the end of a countdown, an unmanned crew module together with a crew escape system would lift off into the atmosphere without any turbulence while also protecting the module’s occupants from harm in the process.

Following a five-hour countdown that ended at 7 am on July 5, such a system (shaped like a tower in the image above) lifted off from the Satish Dhawan Space Centre. It had a launch mass of 12.6 tonnes and stood 14 metres tall. It was powered by seven “quick acting solid motors”, according to ISRO, that had been specifically designed for the occasion. They sent the crew module flying in a giant arc 2.7 km high and 2.9 km wide, at the end of which the module floated down with a pair of drogue parachutes into the Bay of Bengal – all in four minutes and 19 seconds.

“Three recovery boats are being exercised to retrieve the module as part of the recovery protocol,” an ISRO statement released on the occasion concluded. 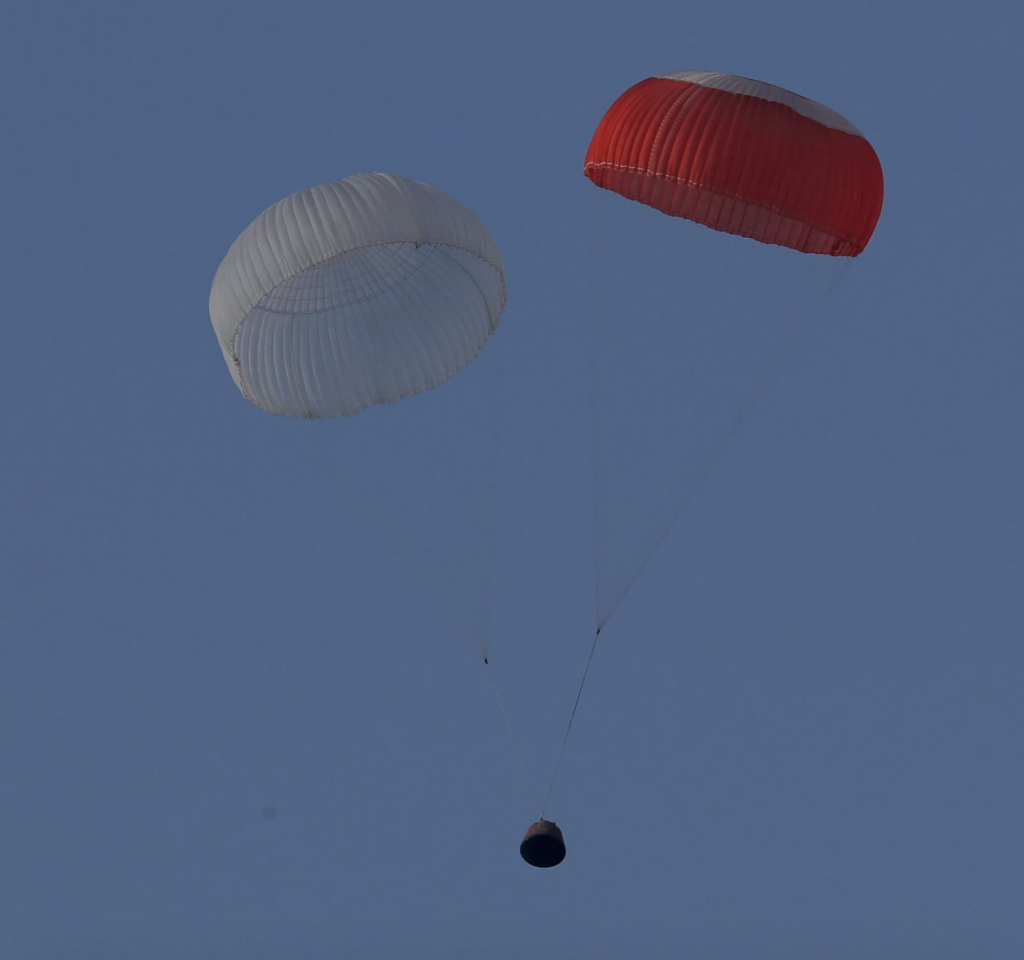 According to reports published in the New Indian Express and The Hindu in 2016, the pad abort test was originally slated to happen later that year. ISRO has not been forthcoming about the reasons for delay.

This is the second test ISRO has performed as part of its human spaceflight programme. The first was in December 2014, when the organisation launched a GSLV Mk III rocket atop which an unmanned crew module had been installed. It separated from the rocket at an altitude of 126 km, blazed through the atmosphere and dropped into the Bay of Bengal.

Tests conducted by other space agencies suggest that the third one – following atmospheric reentry and pad abort – will be the ascent abort: when the escape system is called upon while the rocket, together with the crew module, is ascending through Earth’s atmosphere and before it has entered space. However, ISRO hasn’t made any announcements about whether it’s preparing for such a test or when it will be.

It’s crucial that space agencies ace all these tests before they can qualify a rocket and the crew module as being safe for use in an operational flight. For example, the pad abort hasn’t been a frequent occurrence in spaceflight history but when it is indeed required, it is crucial that it be pulled off to perfection.

The last time a pad abort was used was on September 26, 1983, when the lives of two Russian cosmonauts onboard a Soyuz rocket were endangered after one of the rocket’s boosters leaked propellant onto the launchpad, leading to a fire that spread to the rocket as well. Engineers on the ground quickly sent a radio transmission to activate the escape system, which fired and flew the 7K-ST module housing the cosmonauts to safety 4km away. Two seconds later, the rocket exploded.

In May 2015, SpaceX also conducted a pad abort test for its Dragon crew capsule, which Elon Musk’s company hopes to qualify for human spaceflight before the close of this decade. However, unlike with ISRO’s escape system, the escape engines – which SpaceX has called SuperDraco – are built into the sides of the capsule itself instead of being mounted on an attached unit.

Assuming the CES has been tested to the satisfaction of scientific officers at ISRO, the next big item on the organisation’s calendar is the launch of a GSLV Mk III rocket later this year, carrying the GSAT 29 communications satellite. It will be the second orbital test flight of the Mk III – a rocket ISRO will have to ensure is as reliable as the PSLV has come to be since it is the vehicle of choice for the indigenous manned spaceflight programme. In June 2018, the Cabinet sanctioned Rs 10,000 crore for ISRO to build and launch 10 GSLV rockets (and 30 PSLV rockets) over the next decade.

While the Government of India has not officially cleared the programme to go ahead, ISRO has been testing the necessary technologies before it can make a more concrete pitch to Parliament. Jitendra Singh, the minister of state (independent charge) for the Department of Space, answered a question in the Lok Sabha on August 3, 2016, specifying some of these technologies:

Major activities identified under Pre-Project are Crew Module systems, Environmental Control & Life Support System, Flight Suit and Crew Escape System. The Crew module was flight tested in the experimental mission of GSLV MkIII on December 18, 2014 and the re-entry characteristics and the recovery of the Crew Module were successfully demonstrated. The flight suit development has been completed. Development of the ECLSS and the Crew Escape Systems are progressing well and is targeted to be completed in 2016-17.

According to a brief description on the Vikram Sarabhai Space Centre website, “The programme envisages the development of a fully autonomous orbital vehicle carrying two crew members to about 300 km low earth orbit and their safe return.”

In typical fashion, there is no clarity – at least on the public-facing side – about the timelines involved but many scientists and observers have speculated that it will take at least another five years before ISRO is ready for its first manned mission. Even the pad abort technology demonstration was not accompanied by a notification on the social media or to the press until after the event.

Another similarly secretive pursuit of ISRO’s has been of the reusable launch vehicle (RLV), expected to be completed by 2030. According to various reports over the last two years, this vehicle is expected to be fit with at least five semi-cryogenic engines and will be able to lift 10,000-20,000 kg to the low-Earth orbit. On May 23, 2016, ISRO conducted a test designated ‘hypersonic experiment 1’ – or HEX1 – to check the aero-thermodynamic characteristics of a shuttle-type vehicle to this end. Another component of the RLV, the scramjet engine, was tested in August the same year.