With South Asia in Tumult, Only a Regional Approach Offers Solutions

The subjects of education, health, gender, economic cooperation, democracy, the environment and more were discussed at the Southasia Peace Action Network's first-anniversary event. 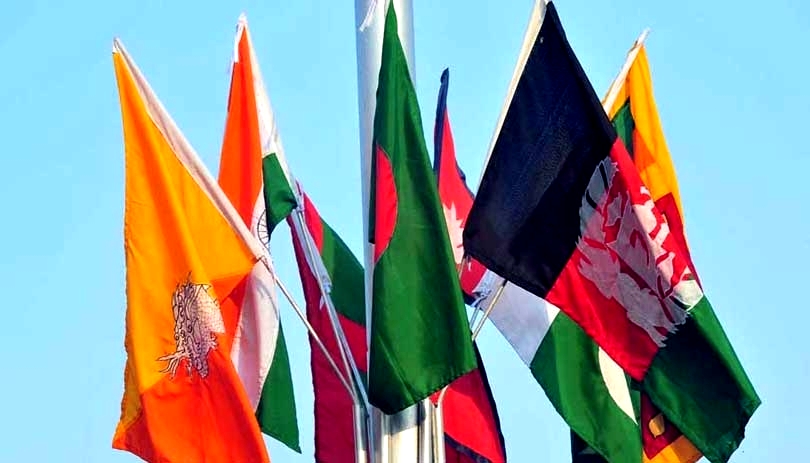 “Each of our countries is facing moments of total insanity and the only recourse is laughter – one big roar across Southasia,” said arts educator Salima Hashmi of Lahore, speaking at an event organised recently to mark one year of the Southasia Peace Action Network (Sapan).

Launched in March 2021, Sapan is an inter-generational coalition that connects academics, activists, journalists, healthcare professionals and others from across the region as well as the overseas diaspora.

“To see the ludicrousness of Southasia right now,” Hashmi said, “we need the ‘dark humour’ of the great storyteller Saadat Hasan Manto.”

The online discussion tackled various themes in nine breakout sessions, even as Pakistan plunged into a constitutional crisis and Sri Lanka, into an economic tailspin.

“It’s us, the little people, who can say the emperor has no clothes and laugh at the demi-gods pretending to be gods – because they all have feet of clay,” added Hashmi. To be able to make sense of the situation, she said, being able to “laugh and ridicule ourselves is necessary”.

“If our governments are not going to come together, it’s up to all of us to come together,” said activist Khushi Kabir in Dhaka, who moderated the group discussion on youth, education and student unions.

“But journeying together, we’ll keep up the struggle,” the song continues.

Hashmi, Kabir and Ramdas are founder members of the Sapan coalition. Participants at this milestone event, titled, ‘A Year of Sapan: Looking Back, Looking Forward’, upheld the importance of a regional approach to the issues plaguing the people of Southasia.

Speakers at Sapan events have included internationally acclaimed public intellectuals, including former UN Special Rapporteur Radhika Coomaraswamy; Afghan rights advocate and Nobel Peace Prize nominee Sima Samar, and renowned linguist Noam Chomsky, who joined Sapan’s September 2021 event to talk about the impact of “the second 9/11” on Southasia and Southasians – the first being the one in Chile in 1973.

“Sapan is a fantastic effort, and it is here to stay,” affirmed Ramdas (83).

Her spouse, retired chief of the Indian Navy, Admiral Laxminarayan Ramdas (89), also a founding member of Sapan, chaired the discussion on the challenges to democracy in the region. Participants highlighted the increasing role of religion in politics and hyper-nationalism among key challenges that confront Southasia today.

The network builds on the work of earlier as well as current initiatives and organisations working on peace, justice and human rights issues in Southasia. The coalition, entirely voluntary and not a registered body, has developed over the last 12 months into a robust, intergenerational, inter-regional and cross-diasporic entity. It brings together octogenarians on the same platform as millennials; grassroots workers on the ground in Southasia with diasporic IT professionals; and healthcare professionals across the region and beyond.

Also read: Backstory: The Media Can Learn From South Asia in These Times of Turmoil

Sapan uses ‘Southasia’ as one word, following the lead of the pioneering regional magazine Himal Southasian, seeking “to restore some of the historical unity of our common living space without wishing any violence on the existing nation-states”. 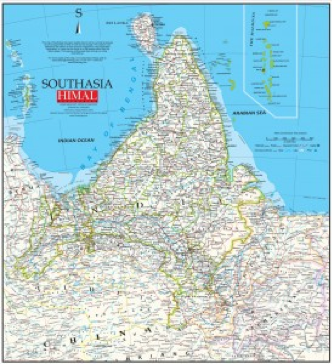 Some may think this map is upside down, “but that is because we are programmed to think of north as top-of-page”. We need to “reconceptualise regionalism in a way that the focus is on the people rather than the nation states. This requires nothing less than turning our minds downside-up.” Photo: Himal Southasian

The old ‘South Asia’ is an “aloof geographical term”; a region of sharply defined borders and nation states which reflects how “an outsider might see our region”, say the editors of Himal.

While admittedly limited to English-language discourse, ‘Southasia’ reflects more closely what we are; a “vast penumbra of intermingling cultures and identities” beyond “our certitudes as citizens of modern-day nation-states”.

Since its inception, Sapan has, on the last Sunday of every month, held public meetings on a plethora of issues. The themes taken up include gender, environment, sports, the climate crisis and public health, with a special focus on the COVID-19 pandemic which has impacted public health and economies over the past year.

While these are “the more soft subjects”, as Lalita Ramdas said, they flag the issue of equal rights and justice and join common threads such as hunger, poverty, lack of access to healthcare, and education.

“We now need to get into the tougher, deeper issues that prevent us coming together as a region, including militarisation, nuclearisation, and religious ultra-nationalism rising in different forms across the region,” she suggested.

Participants agreed on the need for school education across the countries of Southasia to include the subject of Southasian regionalism, for which a curriculum would have to be developed. Previous Sapan resolutions include consensus statements on climate change and healthcare as a basic human right, suggesting that the COVID-19 crisis be used as an opportunity to break away from words into action.

The resolution presented at the end of Sapan’s February, 2022 session on ‘music and mystics’ tackled the Ukraine crisis, presenting the situation in all its complexity and adding to the voices calling for an end to the war.

“Sapan, which started as an experiment, is (becoming) more and more a movement that will help take Southasia forward,” said researcher and law student Vishal Sharma in Shimla, presenting the opening plenary remarks.

Participants also paid tribute to the departed peacebuilders whose vision Sapan aims to take forward, such as Mubashir Hasan, former finance minister of Pakistan, who was one of the first to speak of a Southasian union or federation.

The brief ‘In Memoriam’ section at the start of the session commemorated other departed Southasians too, including journalists Kuldip Nayar and I.A. Rehman; human rights advocate Asma Jahangir; feminist poets Sufia Kamal and Kamla Bhasin; sociologist Rubina Saigol, and others. Saigol was an integral part of Sapan’s initial meeting in March 2021, and passed away from post-COVID complications five months later.

Sarita Bartaula, a youth activist from Nepal currently in Washington D.C., presented an overview of the network’s activities over the past year, together with Waqas Nasir, a researcher and educationist in Lahore.

As rapporteur for the education group, Nasir also later presented key recommendations to the plenary, along with other rapporteurs from the breakout rooms where small groups discussed the way forward on health, art, education, economic cooperation, sports and other issues. Entrepreneur Samir Gupta in Delhi and filmmaker Sahil Laul in Connecticut managed the logistics for this segment.

Participants agreed on the need to learn from each other and for regional seminars on socio-economic policy as well as arts and sporting events. Suggestions included expanding the conversation beyond ideological boundaries in order to involve all stakeholders who stand to benefit from greater economic cooperation.

In the health group, Konchadi Vasanth Pai (90), a retired pharmaceutical employee in Bangalore, flagged the issue of healthcare being out of reach for ordinary people. The moderator was Sabina Faiz Rashid, dean of the James P. Grant School of Public Health, BRAC University, Bangladesh.

“We need to stop just building doctors and hospitals” and look at issues holistically, ranging from mental health to community issues, said Rashid. Physician Dr Fauzia Deeba from Quetta, based in the US, was rapporteur for this group and participants included several diasporic physicians, as well as those from within the region.

With Admiral Ramdas in the chair for the ‘challenges to democracy’ group, activist Kavita Srivastava in Rajasthan moderated the session with Saeed Rid, professor of peace studies in Islamabad, as rapporteur. Participants included  Neeti Nair, history professor  at the University of Virginia, Charlottesville; Faisal Barkat in Srinagar; and advocate Arsh Dhanotia and human rights activist Avinash K. from New Delhi.

Kunda Dixit, founding director of Panos South Asia, Kathmandu, and founding editor of the Nepali Times moderated the media discussion, with Mandira Nayar as moderator, and journalists from around the region as participants.

The members of Sapan believe that a great deal of pain and suffering could be mitigated through greater socio-economic cooperation, resource-sharing, and the creation of a Southasia of soft borders, reflecting the shared history and inter-connected space.

This worldview was reflected in Sapan’s first public event last April, when organisers quickly pivoted from the planned discussion on sports to expressions of concern and solidarity for those impacted by the pandemic. Several sports personalities and journalists who had confirmed participation, joined regardless, like journalist Rajdeep Sardesai, former Pakistani test cricketer Jalaluddin, international squash player Nooreena Shams, besides ace journalists Afia Salam, Zainab Abbas and Sharda Ugra in Karachi, Lahore, and Bangalore respectively, and analyst Nazneen Firdausi in Dhaka.

Sapan’s next event, planned for the last Sunday of April 2022, will focus on labour rights and democracy in Southasia ahead of May Day.

Priyanka Singh is a data analyst in Delhi. Beena Sarwar is a journalist and editor in Boston. Both are Sapan founder-members.