While the draft legislation is popularly termed as the ‘India Out’ Bill, the text does not mention the South Asian giant by name but refers in a generic sense to Maldives’ ties with foreign countries.

New Delhi: In the Maldives, the ruling party’s internal divide has been visible and vocal – especially with next year’s presidential election increasing the stakes. While the differences stem from broader ideological issues, the two camps have also diverged on the fate of the so-called ‘India Out’ Bill that criminalises public campaigns that apparently harm Maldives’ relations with foreign countries.

While the MDP’s parliamentary group had approved the Bill in February, the draft legislation seems to have gone into cold storage due to severe misgivings among the larger faction within the ruling party.

For over a year, the opposition, led by former president Abdulla Yameen, has been spearheading an “India Out” campaign on the premise that Indian military officers are stationed in the Indian Ocean island nation. This had been repeatedly denied by Maldives defence and foreign ministries in multiple statements.

With the rhetoric escalating and reports of a few Indians in Maldives feeling threatened, there had been rising pressure on President Ibrahim Solih to take action. Maldives parliament speaker and former president Mohamed Nasheed had initiated the Bill’s drafting that would have given legal cover for the government to prosecute the opposition with a jail term and heavy penalty.

The MDP parliamentary group approved the Bill on February 9, with the plan to table the Bill in the Majlis at the earliest. With 65 seats in the 87-member parliament, any bill steered by the MDP was guaranteed to be passed.

But, within two weeks, the Bill had seemingly gone into cold storage.

On February 21, lawmaker Ali Azim stood up to congratulate his party colleague Mohammad Aslam, who won the election to be the MDP parliamentary group’s head after defeating the former’s re-election bid. The winning margin of 40 to 25 votes is perceived as the strength of the two camps in the MDP supporting either President Solih or Speaker Nasheed.

Azim admitted on the floor of parliament that the Bill was stalled due to major differences within the party.

Speaking to The Wire, Azim said that he had not taken forward the Bill in the parliament due to opposition within the party. “The Bill was tabled to MDP Parliamentary Group during my tenure as the leader. Motion to submit the Bill to parliament was won by a razor-thin margin of a single vote. This is the reason why I decided to hold off, without submitting it to the parliament,” he said.

Azim claimed that the “main concern of the MPs who are opposed to the Bill is that the Bill might curtail freedom of assembly and freedom of expression”.

But he asserted that President Yameen’s ‘India Out’ campaign had gone beyond these freedoms enshrined in the Maldivian constitution. “It (Yameen’s campaign) incites hatred against a friendly country, and it needs to be stopped. They are simply abusing the fundamental right guaranteed to all under our constitution. President Yameen is desperately trying to keep his base engaged at any cost.”

The ruling party MP expressed uncertainty about the fate of the Bill. “Majority of MDP MPs who are opposed to the Bill are seen as staunch supporters of President Solih, and since the current PG leadership is heavily inclined to them, it is up to them to re-table the bill to PG group or shelve it completely. I do not know what will happen.”

There has been an intensification in factional jousting within MDP in the run-up to the election for the post of party chairperson in May. This election is seen as a critical show of strength of support among the larger party base for Solih and Nasheed, both supporting different candidates, ahead of next year’s presidential polls.

During Yameen’s presidential years, Solih led the MDP inside Maldives, while Nasheed was forced into self-exile after the court convicted him of terrorism charges brought by the government.

Due to the conviction, Nasheed was not eligible to stand for the presidential election, and the candidacy went to Solih, a veteran politician. India also clearly preferred the politically-pragmatic Solih as the presidential candidate over Nasheed, who was perceived as a maverick in New Delhi’s power circles. India’s relations with the Maldives had nosedived in the later years of Yameen’s presidency when he moved closer to China.

The return of the MDP in a surprise landslide victory in 2018 also led to an upswing in relations with India.

Over the last few years, Nasheed had been increasingly vocal about a faster route to change from a presidential to a Westminster style of government in the Maldives, with a possible role for himself as prime minister. The implication was that the rest of the coalition and President Solih didn’t see the need for such a transformation.

While India’s relations with the Solih government have remained rock solid, Nasheed has been more vocal in criticising Yameen’s ‘India Out’ campaign and sparred with Chinese diplomats on social media.

Sources close to Nasheed’s MDP faction also claimed that the reluctance among the majority of President Solih’s supporters not to back the Bill was also due to disquiet among the other coalition parties over the legislation. The implicit criticism was that Solih was choosing the coalition over Nasheed. 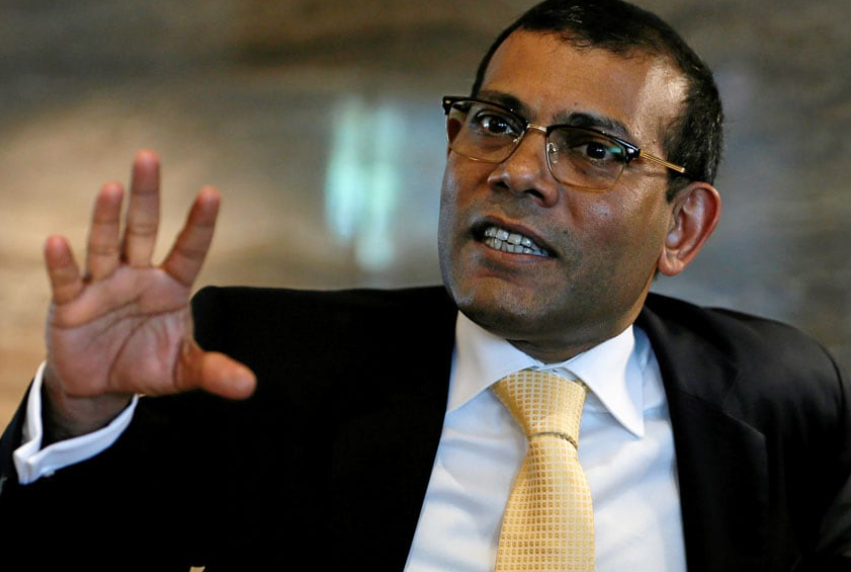 Last year, the Solih government withdrew a Bill criminalising hate crimes after it was tabled in parliament following the terror attack against Nasheed in May 2021. Nasheed had accused the government of pandering to the objections of the Islamist Adhaalath Party, which is part of the ruling coalition.

Diplomatic sources, however, asserted that it was more significant that all the parties in the ruling coalition had spoken out strongly against the ‘India Out’ campaign rather than whether the Bill sees the light of the day. Claiming that a strong consensus among the parties on relations with India was more important, they noted that the hearing of the parliamentary panel had also been helpful.

The hearings, which began in early February in Majlis’s Security Services committee, were part of an inquiry initiated by Speaker Nasheed to assess the implications of the ‘India Out’ campaign.

With nearly all the top Maldivian ministers and officials deposing before the committee in open hearings, sources claimed that their strong statements were useful in making the case to the broader public about the necessity of good relations with India.

With the preliminary hearings complete, a report will likely be released next month. The chairman of the parliamentary panel, Mohamed Aslam, who is also the new head of MDP’s parliamentary group, is currently on a study tour in the United States and expected to be back on April 2.

Well-informed MDP sources told The Wire said that the report would highlight the “negative impact” of such campaigns and its implication for Maldives’ long-term relationships. “The report is not yet finalised, but I believe it will recommend stopping this campaign and taking appropriate legal actions,” he said.

Azim, who is also a member of the committee, felt that the ‘India Out’ Bill might get a second wind if the report recommended the need for legislation.

But, as per the MDP party source, the issue of the Bill will be finalised by further discussions among the parliamentary group.