Why Have We Become Targets of Hatred, Asks Pakistan's Shia Community

The suicide bombing of the Shia mosque in Peshawar on March 4 came after four attacks on the Muslim minority sect in Afghanistan. 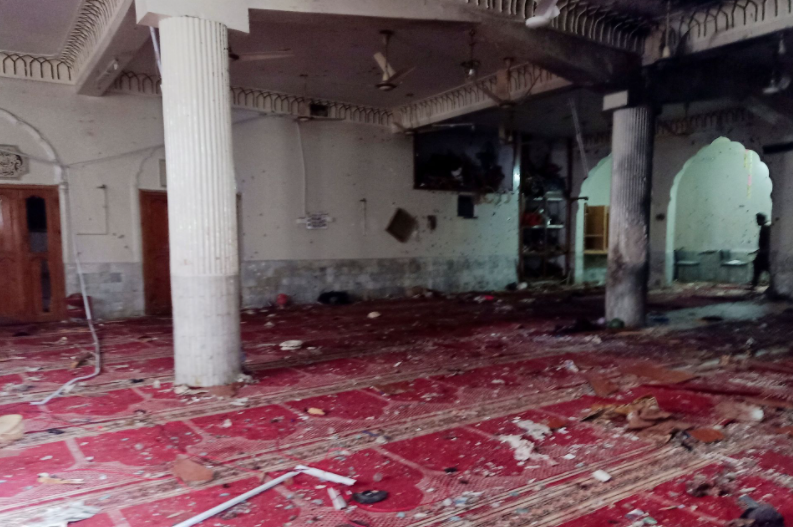 A general view of the prayer hall after a bomb blast inside a mosque during Friday prayers in Peshawar, Pakistan, March 4, 2022. REUTERS/Fayaz Aziz

Karachi: The Shia community of Pakistan believes that the March 4 suicide attack by a bomber from the Islamic State – Khorasan Province on a pre-partition era Shia mosque at Kocha Risaldar, Peshawar, in which 64 people were killed and more than 200 people seriously injured, was the latest in series of attacks on their community since the Taliban came to power in Afghanistan in 2021, supported by the Pakistan government.

“Shias in Afghanistan have been attacked four times since the Taliban takeover in 2021 and we sense that the situation for us will get worse in the future,” said Sayed Shabeer Shah, who was a victim of the 2015 attack on a Shia mosque in Peshawar in which 19 people had been killed.

Shah wondered how the attacker had managed to enter the mosque on March 4, considering that it is well-known for its strict security measures and the distance between the main gate and the mosque itself is about 400 meters, which takes three to four minutes to cross.

No guards had been available at the main gate, said Shah. But there had been eight policemen posted at the mosque who had failed to be alert enough to thwart the lone suicide bomber from entering the building, he added.

“The attack on the Shia mosque in Peshawar was the result of the insecure security state’s suicidal policies,” said Bushra Gohar, a senior member of the National Democratic Movement and a former member of the National Assembly of Pakistan. “The sponsorship and nurture of religious extremism remains an integral part of the state’s policy.” Relatives of the victims comfort each other, after a bomb blast in a mosque during Friday prayers in Peshawar, Pakistan, March 4, 2022. Photo: REUTERS/Khuram Parvez

A history of intolerance

Every government that comes to power in Pakistan claims that religious minorities will be safe. But there is a vast and deep distance between this claim and reality. For example, it is said that militant groups that follow the Deobandi school of Islam, such as the Afghan Taliban, Lashkar-e-Jhangvi and the Ahle Sunnat Wal Jamaat, are banned in Pakistan. But these groups continue to work under different names and have promoted sectarian violence against the Shia community since the 1990s.

“They seem to think that those who do not match them in their beliefs and ideology deserve to be killed,” said Mohsin Dawar, a Pashtun nationalist who is chairman of the National Democratic Movement and a member of the National Assembly of Pakistan.

“Even if we quote Yazid in order to condemn him, we have FIRs lodged against us because we quoted Yazid,” says activist Abid Rizvi. “Now we cannot even criticise Yazid.”

Yazid was the second caliph of the Umayyads and the first person in Islamic history to inherit the caliphate. When Hussain, the grandson of Prophet Muhammad, was martyred in the battle of Karbala by the forces led by Yazid, it led to the beginning of a schism in Islam that divided the faith into Sunnis, the majority, and Shias, a large minority.

Mohsin Dawar believes that the military establishment of Pakistan is responsible for what happened in Peshawar on March 4 due to its policies on Afghanistan.

After the Soviet invasion of Afghanistan in December 1979, Pakistan supported the Mujahideen, which were groups of Afghan guerilla fighters who fought the Soviets as a jihad. When the various groups of Mujahideen began to war with each other instead, a group of Islamic teachers and students emerged, calling themselves the Taliban and fighting the Mujahideen to take over the country. Pakistan then began to support the Taliban, an anti-democratic force, but now the Daesh (the Islamic State – Khorasan Province) is working against the Taliban and also attacking minorities, Dawar explained.

“Pakistan facilitated and celebrated the terrorists’ takeover of Afghanistan without thinking through the dire consequences for the country and the region,” said Gohar. “Political leaders and parliament have surrendered their roles and responsibilities in the formation of foreign and security policies to the unelected military and civilian bureaucracy in return for petty power interests.”

She added: “We have repeatedly warned the people of Pakistan about the regrouping of Taliban terrorists of all shades in Khyber Pakhtunkhwa under the state’s watchful eyes. It is an indication that a new cycle of proxy war has begun since the Taliban occupation of Afghanistan last year.”

Dawar believes that there is something dubious about the fact that Arman Lodhi Shaheed, a member of the Pashtun Tahafuz Movement, was arrested for distributing pamphlets in Karachi, while those who circulate Daesh literature in Khyber Pakhtunkhwa are never booked by the police. “Political movements are scrutinised,” he pointed out.

Politics aside, the Shia community in Pakistan is overcome with grief. “Why are we being killed?” asked Muzafar Akhunzada, deputy secretary of the Shia Ulema Council of Pakistan. “We are against injustice and we spread the message of peace. But our girls are orphaned and our daughters are made widows. Someone must answer: who killed us?”

The state could use the excuse that attacks like this are carried out in Pakistan due to opposition to the China-Pakistan Economic Corridor, Akhunzada said. “But if that is the case, why does it happen only to the Shia community?” he asked.

While the police have traced the suicide bomber and the people who assisted him, they will not share further details until the investigation has been completed.

Akhunzada will not place the blame for the attack directly on the Pakistani state for fear that fatwas will be made against him. After the attack on the mosque, very few people even called the Shia community by its name: members of the government in Islamabad and many members of opposition parties called the suicide bombing “an attack on humanity” rather than “an attack on Shias”. Just a day after the attack, a video went viral on social media in which Shias were referred to as kafirs: infidels.

“How can people change the identities of communities?” asked Dawar. “When a Pashtun is killed, the state does not say a Pashtun was killed. It says a Pakistani was killed. The fact is that more Pashtuns and Balochs are killed in Pakistan than members of other communities. You cannot erase someone’s identity.”

Any person who identifies herself or himself as part of a certain community should be recognised as part of that community, said Dawar. “If Shias say that they are being killed because they are Shia, then we should accept it,” he said.

Qazi Khizer, president of the Sindh chapter of the Human Rights Commission of Pakistan, explained: “Muslims do not kill Muslims. That is the mindset of the Deobandi and Salafi groups that are supported by the state of Pakistan. These groups believe that Shias are not Muslims.”

According to a research study carried out by the Human Rights Commission, 39 Shia doctors were killed in 2004 because they belonged to the Shia sect. “Shias are killed for their beliefs,” said Khizer.

“It is the fault of the state. Everyone knows who actually runs the state,” said Akhunzada. “We have a message for those who threaten us and pressurise us to deflect from our faith – we respect all faiths and we will never change our path. What is the crime we have committed that we are being killed?”