US Goes For Strict Monitoring of Pakistan’s F-16s

Some in India saw the announcement as subterfuge for upgrading Pakistan’s F-16s, while others saw it as strict US oversight.

Washington: Pakistan Prime Minister Imran Khan and his team have declared their US visit a success. They have reason to be pleased, mainly on account of President Donald Trump’s energetic endorsement of Pakistan’s role in the Afghan peace process and his inexplicable claims about India seeking mediation in Kashmir.

Pakistan’s foreign minister, Shah Mahmood Qureshi, was so convinced of the trip’s success and the improved scenario, he set aside diplomatic caution and accused two US officials – White House senior director for South Asia Lisa Curtis and acting assistant secretary of state for South and Central Asia Alice Wells – of shutting the door on Pakistan in the past.

The question is if the door has opened somewhat, if at all. The good optics of Khan sitting beside Trump in the White House worked in Pakistan’s favour, but have things changed substantively for the better for Rawalpindi?

Two public documents by the US government are worth considering. First, the fact sheet released by the White House within minutes of Trump’s claims on Kashmir, which said Washington was asking Pakistan “to do more” to facilitate the Afghanistan peace talks.

Referring to terrorist groups operating within Pakistan, the fact sheet said “it is vital that Pakistan take action to shut down all groups once and for all.”

The fact sheet was obscured in the excitement over Trump’s offer to mediate in Kashmir, but it is a document on the basis of which Curtis and Wells presumably held discussions with the Pakistani delegation. The main thrust was “to do more” on key issues. 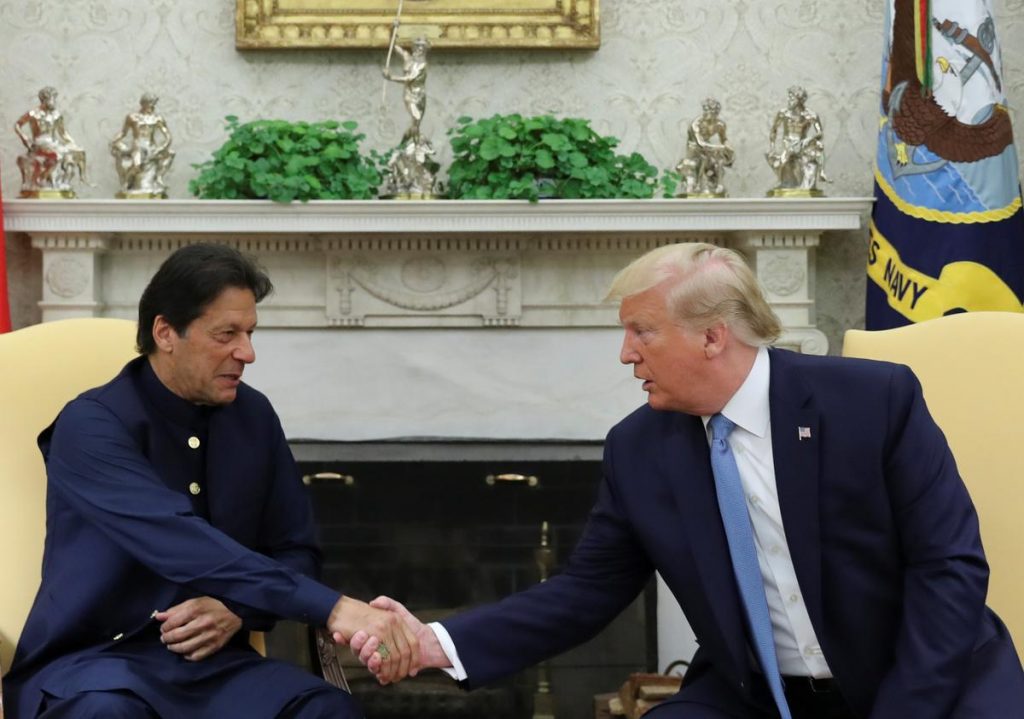 More significantly, a day after Khan’s visit ended, the Pentagon announced that it will conduct “24/7 end-use monitoring” of Pakistan’s F-16 fleet by posting 60 representatives on the ground. This was hardly a vote of confidence. It was the first reference to 24/7 monitoring.

“After Balakot, they want to have proper oversight. It is a stringent imposition of US rules on Pakistan,” a well-informed Indian observer noted. “The notification is very explicit.”

It’s well-known that US officials had ordered a review of the Pakistan’s F-16 fleet after its misuse was reported in the wake of the Pulwama attack in February by Pakistan-based Jaish-e-Mohammed.

Indian officials at the time had stressed that Pakistan was in violation of its F-16 end-user agreement, which had been explicitly discussed by US officials in public testimony to the US Congress. New Delhi had also presented evidence of US-made Advanced Medium Range Air-to-Air Missiles or AMRAAMS used by Pakistan in an air raid on Indian territory.

An additional controversy had arisen over whether an Indian MiG-21 had shot down a Pakistani F-16. A US media report quoting US officials said no F-16 was shot down after a physical count was done. But a Pentagon spokesman told the Hindustan Times he was unaware of any such investigation and the state department declined to discuss details of the end-user monitoring agreement.

While the public controversies raged, the US government was making its own internal assessment of whether Pakistan was in violation. The decision to station more US personnel on the ground hints broadly at what the conclusion might have been.

The announcement on 24/7 monitoring by the US Defense Security Cooperation Agency came last Friday, soon after Khan’s departure. It was seen as a sop to Pakistan by many, but was it?

The official press release said the state department had approved a possible Foreign Military Sale (FMS) to Pakistan to support a “technical security team” for the F-16 programme for an estimated cost of $125 million.

The notification by DSCA, which leads, directs and manages foreign security assistance for the Pentagon, was sent to the US Congress on July 26. It does not mean resumption of US security aid to Pakistan, a state department official told The Wire. Nearly $2 billion in various military and security aid to Pakistan were blocked last year by the Trump administration.

Also Read: Is the US-Pakistan Transactional Relationship Back on Track?

“There has been no change to the security assistance suspension announced by the president in January 2018 for Pakistan,” the state department official said. But the suspension allowed narrow exceptions in support of US national security interests, he added, implying this was one such allowance.

The team of monitors to be stationed in Pakistan will be supplied by Booz Allen Hamilton Engineering Services, which has been chosen as the principal contractor. Pakistan is said to have 85 functioning F-16s of various models in its inventory.

Much larger sale to India

At the same time, the DSCA also approved a much larger sale to India – $670 million worth of spare and repair parts, technical and logistical support for its C-17 fleet. It was noteworthy that the two announcements came within minutes of each other.

Besides the vast difference in the amount of money involved, perhaps, the idea was to show the difference in the nature of the partnership – Pakistan was getting 24/7 end-use monitoring of its F-16s fleet while India was referred to as an “important force for political stability” in the Indo-Pacific and South Asia region.

But critics saw the Pakistan announcement as the return of good old days for Rawalpindi’s generals and their demands and desires once again coming front and centre.

One Indian analyst said the $125 million for Pakistan was actually meant for retrofitting 18 of the F-16s with updated Pratt & Whitney engines and that Pakistan was well on its way to refurbishing its entire fleet and lengthening its life.

While Pakistan has certainly managed to get its foot in the door in Washington with a well-crafted visit, the DSCA announcement is not about opening the store room. At least, not yet.

The idea was to show the difference in the nature of the US’s partnership with India and Pakistan. Photo: REUTERS/ Mian Khursheed /File

A US official said the Pakistan announcement is a continuation of an existing contract, which was about to expire in December this year. The new approval will finance the programme for the next five years.

First, $125 million is hardly the kind of money that will buy engine upgrades. But it sounds about right for salaries and logistics support for overpaid Booz Allen contractors to provide “oversight of operations” for the next five years.

The oversight will require 60 representatives to be posted in Pakistan for the express purpose of protecting “U.S. technology through the continued presence of U.S. personnel that provide 24/7 end-use monitoring.” The idea is also be to protect US technology from Chinese spies in Pakistan.

A US security contractor can make anywhere between $100,000 to $250,000 a year depending on the country he is deployed in and the company he/she works for. Besides the salary, defence contractors claim expenses for offices, residence, frequent travel, logistics and support staff. An extremely high profit margin is built in because of the “danger” involved.

A good comparison is the cost of deployment of US troops. Studies have shown that it cost the US government about $1 million per soldier per year in Afghanistan in 2009. By 2014, the figure had doubled.

At the same time, US policy and attendant moves vis-à-vis Pakistan do require close monitoring and a healthy dose of scepticism. There’s no telling what turns Washington may make given Trump’s desperation to get out of Afghanistan.