The resolution drafted by the OIC makes no mention of a fact-finding mission, which Afghan stakeholders had suggested. 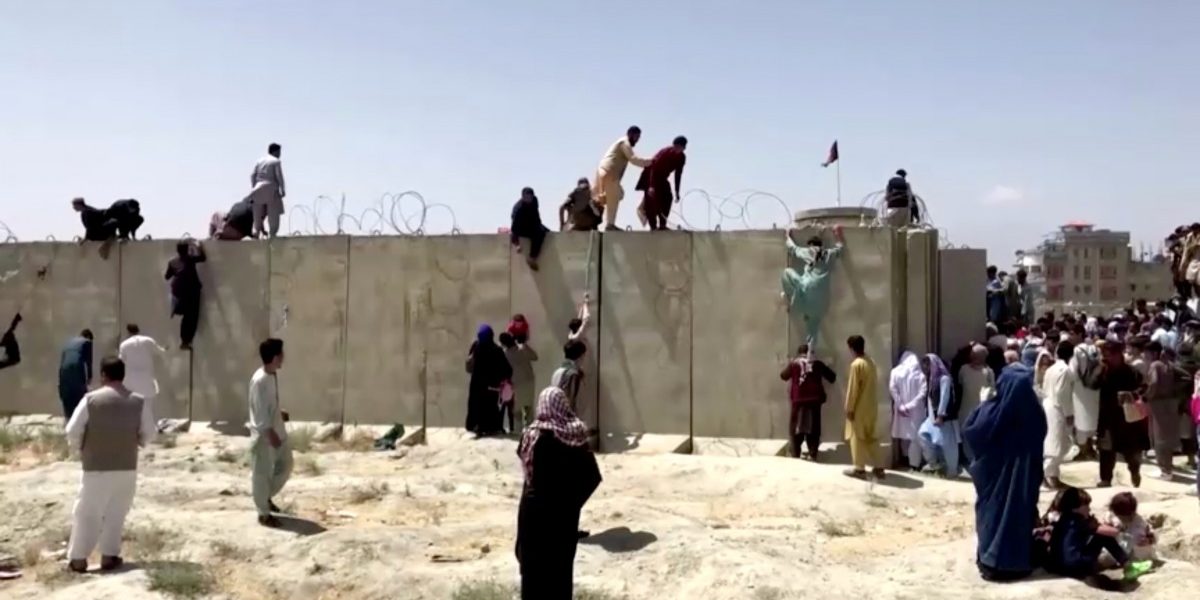 New Delhi: A week after the Taliban’s victory in Afghanistan, the United Nations Human Rights Council’s special session was supposed to signal to the Taliban that the world was monitoring its human rights abuses. Instead, the final resolution, drafted by the Organisation of Islamic Cooperation, was so watered down that the European Union questioned its purpose publicly and Afghanistan’s top human rights chief called it a “travesty”.

On Tuesday, the Geneva-based 47-member UNHRC adopted a resolution on protection of human rights in Afghanistan by consensus without voting. It only asked the UN human rights commissioner, Michelle Bachelet, to present an oral update at the next session in September-October 2021 and a “comprehensive” written report during the subsequent 49th session in February-March 2022. There is no mention of the Taliban in the entire three-page document.

“If we cannot agree at least on condemning the human rights abuses and violations, if we are not willing to call out the parties involved so that the message that we are watching them is clear, then what is the purpose of this resolution” said the Austrian envoy on behalf of the EU, just before the resolution was adopted without a vote.

Just as the Taliban suddenly took over after 20 years, Afghanistan’s mission in Geneva, still manned by diplomats appointed by the Ashraf Ghani government, were looking for sponsors to push for a special session of the UNHRC. They, apparently, first approached EU members but did not find much traction.

With the West preoccupied with the evacuation of their citizens, the OIC quickly jumped into the fray. A letter was forwarded to the HRC president on August 17, signed by Afghanistan and OIC’s coordinator on human rights, Pakistan. The date was set for a day-long special session – the Council’s first-ever on Afghanistan – on August 24.

Podcast: Many of My Afghan Friends Had Begun to Lose Hope Several Years Ago

According to diplomatic sources, Afghanistan had first shared a draft, which had included language to set up a fact-finding mission. This fundamental Afghan demand emerged after reports began trickling out of human rights abuses in territory occupied by the Taliban as the insurgent group swept through the country last month.

A week before the government fell, Afghan foreign minister Mohammad Haneef Atmar raised the need for a special session and a fact-finding mission during a phone call with Bachelet.

It is learnt that the OIC rejected the Afghan draft.

On Sunday, Pakistan circulated a draft, which gave member states less than 24 hours to get instructions from their capitals and negotiate amendments. It had no mention of a fact-finding mission. Instead, it only suggested that the UN human rights chief give a written report and hold an interactive dialogue in UNHRC’s 49th session, rather than in the forthcoming 48th session this year.

There was outrage amongst international NGOs. “A text drafted by Pakistan as leader of the Organisation of Islamic Cooperation (OIC) recommends the weakest possible response, no investigation or monitoring body, just a future discussion on a report by the High Commissioner for Human Rights that was already mandated,” Human Rights Watch (HRW) stated on August 23.

On Monday, the informal discussions witnessed member states, especially from the EU, trying to bring in some amendments.

“During the informal session, there were some fairly weak suggestions for amending the resolution. The EU proposed an SR (Special Rapporteur), which is not a strong mechanism – lacking real power with almost no staff,” Rachel Reid, a senior human rights consultant who has worked for many years on Afghanistan, told The Wire.

She recounted that the OIC’s co-sponsorship of the special session had been a shock. “We were stunned when the OIC – with Pakistan in the lead – was invited to lead this process. The fact that we ended up here reflects the procrastination and lack of leadership by multiple member states. This was an epic betrayal by the UN HRC.”

The concern about Pakistan steering the draft resolution was mainly due to Islamabad’s close relations with the Taliban.

It was known by that time that the draft resolution would be adopted by consensus, as no country, in the current circumstances, would call for voting on a draft that condemned human rights violations in Afghanistan.

In an article for the Kabul-based research group, Afghanistan Analysts Network, Reid had written that the Afghan mission in Geneva had not been happy with the OIC resolution but had hoped that other states would take a stronger position for setting up a concrete mechanism.

“No state has done this, although it is entirely within their power. This may in part be because several member states, who would normally be sympathetic, are entirely focussed on evacuating their nationals and other at-risk Afghans from Kabul; they may lack the bandwidth to take on this issue or fear putting the evacuation at risk by antagonising the new Taleban authorities,” said the report.

As per sources, India had attended but not been active during the informal discussions.

The Indian statement, made in the first half of the special session on Tuesday, did not refer to the resolution. It called on the international community to enable all Afghans, including women and minorities, to live in peace and dignity. Besides, India reiterated its previous position for an “inclusive” and “broad-based” Afghan government. It hoped that Afghan soil would not become a haven for terror groups like Lashkar-e-Tayyabba and Jaish-e-Mohammad. Just like all its statements, India made no mention of the Taliban.

Opening the special session, top human rights officials conveyed, directly and indirectly, that the draft resolution was far from adequate.

Stating that there were credible reports of human rights violations under areas controlled by the Taliban, UN human rights chief Bachelet urged the Council to take “bold and deliberate” action by establishing a “dedicated mechanism” to monitor Afghanistan.

Shaharzad Akbar, chairperson of the Afghanistan Independent Human Rights Commission, was more forthright. “The draft resolution tabled today is a travesty,” she said.

The afternoon meeting, during which the resolution was to be passed, was delayed in its start.

By that time, there was another amendment – the human rights commission had to also give an oral update in the next session, rather than waiting till 2022.

The civil society members allowed to speak at the session were scathing. “Effective fact-finding is the bare minimum. Words of concern alone from this Council are not enough,” said the International Commission of Jurists.

Amnesty International noted that the Council had to launch a “robust, independent, investigative mechanism to ensure informed decision-making by the international community and combat impunity which continues to fuel grave crimes”. “Anything less is an abdication of responsibility,” it asserted.

Introducing the draft resolution on behalf of the OIC, Pakistani envoy Khalil Hashmi stated that the phrase “inclusive and broad-based” was also added in one of the operative paragraphs.

Afghanistan’s permanent representative, Nasir Ahmad Andisha, indicated that he was not satisfied. “Enhanced monitoring is essential to prevent further atrocities and assure accountability. This is the time to come together and affirm zero-tolerance policy towards impunity.”

He told the session that the resolution was not enough but added that Afghans would hear the messages of solidarity from member states. “…we all need an outcome commensurate with the situation in the ground. Despite all our efforts, unfortunately, we have not been able to achieve such an outcome.”

China publicly supported the resolution, just as Russia did. However, the Russian diplomat expressed regret that there was no mention of the ‘Moscow format’ process in the resolution or the negative impact of military intervention by foreign troops.

Mexico said that “as expressed during the informal consultations repeatedly”, the draft resolution should have a “more robust mandate” in terms of monitoring.

However, the EU made an unusually strong statement, giving details of the amendments that OIC rejected.

Speaking on behalf of the EU, Austria’s Elisabeth Tichy-Fisslberger stated that while some of the suggestions were taken on board, the regional body “strongly regrets” that none of their “core elements” were integrated into the draft.

“The OIC did not want to establish a fact-finding mission and also turned down our alternative proposal for a special rapporteur. The OIC presented a text that does not even call the Taliban by their name, contrary to the latest statement by the UNSC,” she said bluntly.

The Austrian diplomat noted that the resolution drafters did not want any reference to the “women, peace and security agenda” or to the CEDAW to which Afghanistan is a state party.

She noted that the OIC also rejected all suggestions to mention the “important work done” by the United Nations, International Criminal Court and the principle of Responsibility to Protect.

“We regret that due to the OIC’s refusal to allow for a substantive text and a comprehensive preventative mandate, it falls short of the level of ambition that the situation in Afghanistan demands.”

She then asked that if the international community cannot even condemn human rights and tell the parties that the world is watching, “then what is the purpose of this resolution”.

The Austrian diplomat, however, added that voting against the resolution was also not possible, as it would seem peculiar to vote against a document that “deplores the suffering of many people in Afghanistan”.

The president of the Council then announced that that resolution had been adopted, without a vote.