“In our case, terrorism is bred not in some faraway land, but across our border to the west. Our neighbour’s expertise is not restricted to spawning grounds for terrorism; it is also an expert in trying to mask malevolence with verbal duplicity,” Swaraj said.

New Delhi: At the United Nations, Indian external affairs minister Sushma Swaraj said that a key reason for calling of talks with her Pakistani counterpart was the news of killing of three Indian policeman “within hours of our acceptance”, even as she accused Islamabad of expertise in “verbal duplicity”.

After a few hours, her Pakistan counterpart lobbed a counter-volley, accusing India of fomenting terrorism and cancelling talks on flimsy pretext, which shows New Delhi’s preference for “politics over peace”.

“We are accused of sabotaging the process of talks. This is a complete lie,” said Swaraj in her speech at the UN General Assembly on Saturday.

She asserted that all Indian governments, including Prime Minister Narendra Modi’s, had begun talks many times, as these “are the only rational means to resolve the most complex of disputes”. “If they stopped, it was only because of Pakistan’s behaviour,” she claimed.

India had on September 20 agreed to a request by Prime Minister Imran Khan for a meeting between the two foreign ministers on the side-lines of the 73rd session of the General Assembly. But, it was cancelled the next day over “disturbing developments”.

“We accepted the proposal. But, within hours of our acceptance, news came that terrorists had killed three of our jawans. Does this indicate a desire for dialogue?” she asked.

This is the first time that Indian government has publicly clarified that the talks were cancelled over the killing of three members of Jammu and Kashmir state police. Pakistan’s response to the cancellation had presumed that India’s withdrawal from the talks was due to the discovery of the mutilated dead body of an Indian border security personnel within Pakistani territory.

In the MEA statement cancelling the talks, India had directly accused Khan of revealing his “true face”. However, Swaraj didn’t point fingers directly at Khan at the General Assembly and was mentioned only in reference to his proposal for talks between the foreign ministers.

She reminded that Modi had invited the heads of the SAARC nations to his swearing-in ceremony in May 2014.

The Indian minister also noted that “Pakistan-sponsored terrorists” attacked Pathankot air force base less than a month after she went to Islamabad with an offer for a comprehensive bilateral dialogue. “Please explain to me how we could pursue talks in the midst of terrorist bloodshed?”.

She earlier described terrorism, along with climate change, as being “an existential threat to humanity”.

“In our case, terrorism is bred not in some faraway land, but across our border to the west. Our neighbour’s expertise is not restricted to spawning grounds for terrorism; it is also an expert in trying to mask malevolence with verbal duplicity,” asserted the Indian foreign minister.

She cited the discovery of 9/11’s “architect and ideologue”, Osama bin Laden in Pakistan as the “most startling evidence of this duplicity”.

Even after Bin Laden was killed by US special forces at Abottabad, Pakistan “continued to behave as if nothing had happened”, said Swaraj. “Pakistan’s commitment to terrorism as an instrument of official policy has not abated one bit. Neither has its belief in hypocrisy”.

She noted that while the killers of 9/11 met their fate, “the mastermind of 26/11 Hafiz Saeed still roams the streets of Pakistan with impunity”.

The global illicit financing watchdog’s notice to Pakistan on terror funding was a demonstration “that the world is no longer ready to believe Islamabad”, she said. 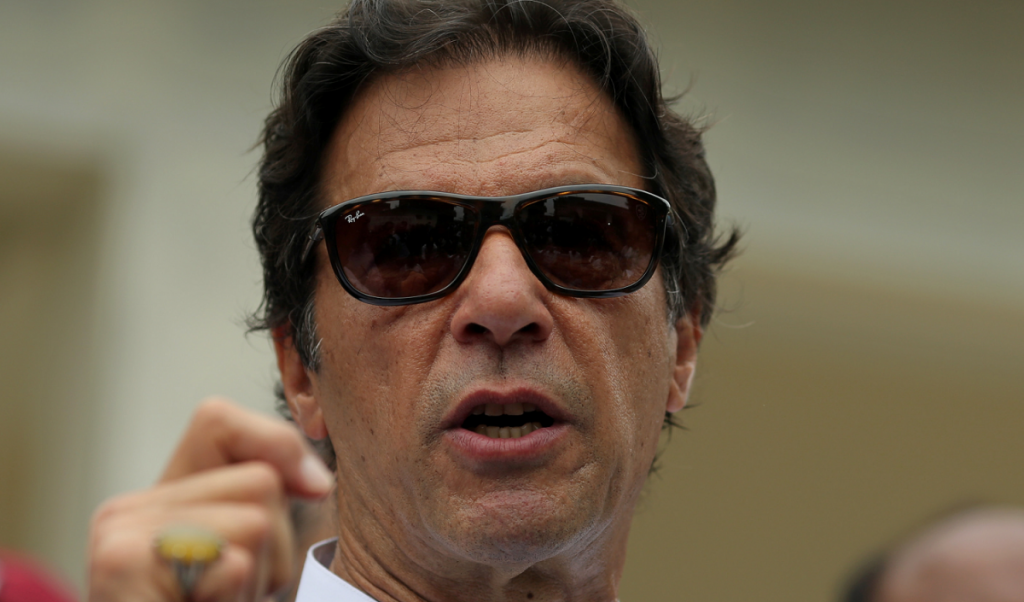 With Pakistan foreign minister S.M Qureshi scheduled to speak later on Saturday afternoon, Swaraj then went on the offensive to attempt to discredit Pakistan’s attempt to bring up alleged human rights violations by security forces in Kashmir.

“Time and again, Pakistan accuses India of human rights violations. Who can be a greater transgressor of human rights than a terrorist?” she said, adding that Pakistan “glorifies killers” and “refuses to see the blood of innocents”.

“It has become something of a habit with Pakistan to throw the dust of deceit and deception against India in order to provide some thin cover for its own guilt. The United Nations has seen this before. Last year, Pakistan’s representative, using her right to reply, displayed some photographs as “proof” of “human rights violations” by India. The photographs turned out to be from another country. Similar false accusations have become a part of its standard rhetoric,” said Swaraj.

She also weaved Pakistan’s printing of postage stamps on Kashmir as a fallout of the failure of the international community to not be able to define terrorism and finalise the comprehensive convention on International Terrorism.

“This is why terrorists with a price on their head are celebrated, financed and armed as liberation heroes by a country that remains a member of the United Nations. Cruelty and barbarism are advertised as heroism. The country prints postage stamps glorifying terrorists,” she said.

India had cited the release of postage stamps as one of the two reasons for the cancellation of the foreign minister-level talks, even though Pakistan Post had released them before the parliamentary polls in July.

In her speech, she also advocated faster pace for reforms of the United Nations. “India does not believe that the United Nations should become the instrument of a few at the cost of the many. India believes that we must move forward together or we sink into the swamp of stagnation”.

She also expressed confidence that India will achieve her SDG goals due to the flagship programmes initiated by PM Modi.

On climate change, she mentioned that Modi had launched the International Solar Alliance with French President Emmanuel Macron. “Our prime minister has described his vision of sustainable and available energy in a typically apt phrase: One Sun, One Grid. This breakthrough concept can become the solution we seek to the problems,” she added.

“Pakistan continues to face terrorism financed and orchestrated by India – shall never forget the mass murder of more than 150 children in a Peshawar School, the terrible Mastung attack and others that have links with terrorists supported by India. And we will never forget the terrorist attack in India against Samjhota Express carrying innocent Pakistanis – and now its confessed perpetrators are being allowed to walk free,” he said.

Pakistan has accused Tehreek-e-Taliban of having links with India, but has not previously linked specific incidents to its eastern neighbour at an international forum. India has previously summarily dismissed reports of any connection with TTP.

Bringing up the ongoing custody of Kulbhushan Jadhav, he said that the former Indian naval officer had “provided evidence of Indian financed, planned and executed acts of terrorism and violence in Pakistan”.

India and Pakistan are currently litigating before the International Court of Justice on the lack of consular access to Jadhav.

On the cancellation of talks by India, Qureshi stated that New Delhi had “wasted an opportunity for the third time for the Modi government – each time with flimsy grounds.”

Accusing India of preferring “politics over peace”, he claimed India used the “pretext of stamps issued months ago, of a Kashmiri activist and depicting grave human rights violations, including pellet gun victims, as an excuse to back out from the talks”.

He asserted that there can be “no lasting peace in South Asia without a just settlement of the Jammu and Kashmir dispute based on the UN Security Council resolutions and the will of the Kashmiri people”.

Stating that the report of the office of UN high commissioner on human rights (OHCHR) on Kashmir had “exposed” India, he claimed that Pakistan was ready to host an independent probe team in Azad Jammu and Kashmir.

Referring to Indian statements about another ‘surgical strike’, Qureshi stated, “If India ventures across the LoC, or acts upon its doctrine of “limited” war against Pakistan, it will evoke a strong and matching response”.

In certain parts, the two speeches were mirrors of each other. While Sushma Swaraj stated that Indian PM had pledged to build a “New India” by 2022, Qureshi said, “Under the leadership of Prime Minister Imran Khan, we have begun to shape up a new Pakistan”.

Not surprisingly, India took the opportunity of the right of reply to lash out at Qureshi for “baseless allegations”.

“What we heard is a ‘New Pakistan’ cast in the mould of the old,” said Indian diplomat Enam Gambhir on the Pakistani foreign minister’s speech.

She especially picked out Qureshi’s “preposterous” claim of linking India to the 2014 attack on the Peshawar school as “among the most preposterous”. “Let me recollect for the new government of Pakistan the outpouring of sorrow and pain in India that followed the massacre of innocent children in 2014. Both houses of India’s Parliament had expressed solidarity while paying respect to the memory of those killed. Schools all over India had observed two minutes of silence in their memory”.

Gambhir stated that the “despicable insinuation made by the Foreign Minister of Pakistan dishonors the memory of the innocent lives lost to terrorists on that day”.

It was a “desperate attempt to look away from the monster of terror that Pakistan has itself created in its quest to destabilise its neighbours and covet their territory,” she added.

On Pakistan’s claim of having turned the tide on terrorism, the Indian diplomat asked, “Can Pakistan deny the fact that it is the host and patron of 132 of the UN-designated terrorists and 22 terrorist entities under the 1267 and the 1988 UN Security Council sanctions regime as of today? Will Pakistan deny that UN-designated terrorist Hafiz Saeed enjoys a free run inside Pakistan and spews venom and sets up candidates for electoral office?”

She then referred to the removal of a member of Pakistan Prime Minister’s Economic Advisory Council for being a member of the minority Ahmaddiya community.

“It is evident from the recent example of the Princeton economist, Professor Atif Mian’s appointment and removal from the Economic Advisory Council on grounds that he belongs to a ‘minority’. Before preaching to the world, championing of human rights should begin at home”.

On the OHCHR report on Kashmir, she said, “We have also today heard support by Pakistan for a report no Member State had asked for; none supported; and on which no action was taken”.

In response to Qureshi’s claim that the talks were called off on “flimsy” grounds, Gambhir said that for India, every loss of life counts. “Hence our belief that talks and terror cannot go together”.

In its first right of reply, the Pakistani representative deplored that India gave “another homily against terrorism”.

Escalating the rhetoric, he said that the “breeding ground of terrorism in the region are the RSS centres of fascism”, whose “claims of religious superiority are perpetrated through state patronage all across India”.

He invoked the name of Farooq Ahmed Dar, who was tied to the front of a jeep by Indian army soldier, to be used as a “human shield”.

The Pakistani diplomat then covered a wide range of issues in India from mob lynching to Assam NRC drive and the choice of Yogi Adityanath as chief minister of Uttar Pradesh.

“For a country where members from India’s minority, including Christians and Muslims are publicly lynched at the hands of Hindu zealots, where perpetrators of Samjhauta attack receive state patronage, where an unabashed Hindu extremist Yogi Adityanath who openly advocates religious superiority of the Hindus serves as the face of the largest Indian state, Uttar Pradesh, where right to citizenship to Bengalis in Assam is being arbitrarily rescinded and who have suddenly been made stateless and have been called ‘termites’ by a prominent Indian leader, where churches and mosques are torched, is surely not qualified to give sermons to others,” he said.