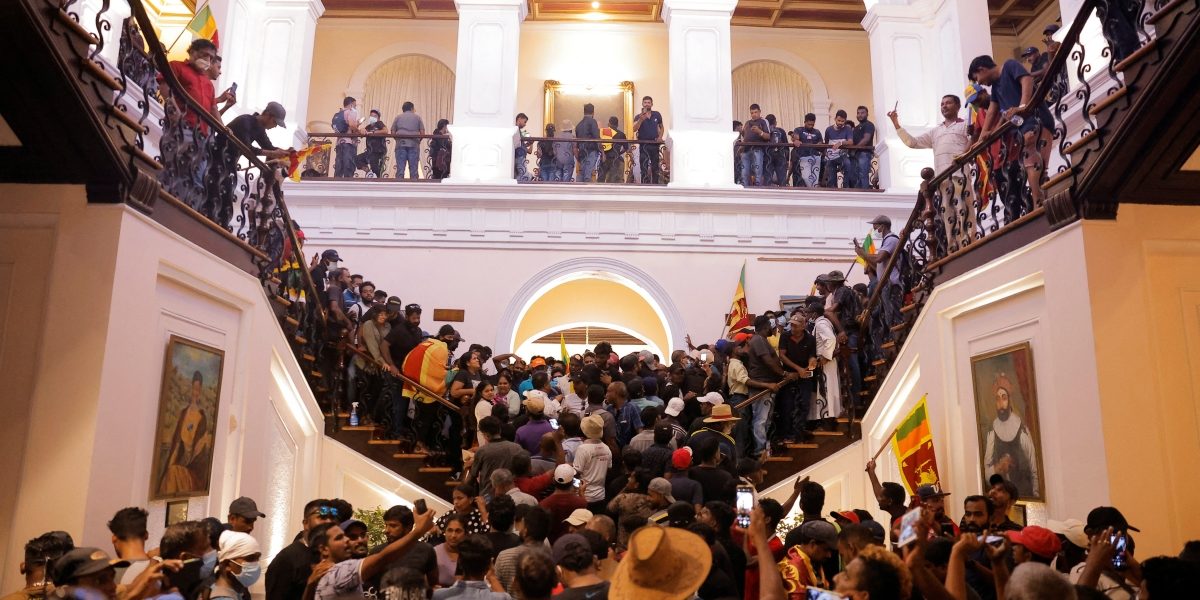 New Delhi: Hours after tens of thousands of protesters stormed into the vast residential properties of Sri Lanka’s president Gotabaya Rajapaksa – amidst reports that the president fled in a Navy ship – Prime Minister Ranil Wickremesinghe said he will resign from his post and make way for an all-party government to take over.

The Prime Minister’s Media Division said that the Prime Minister will resign after an all-party government is established and the majority is secured in Parliament. His office said that Wickremesinghe will continue as prime minister until then.

To ensure the continuation of the Government including the safety of all citizens I accept the best recommendation of the Party Leaders today, to make way for an All-Party Government.

To facilitate this I will resign as Prime Minister.

Wickremesinghe had initially turned down political parties’ request to resign at an all-party meet, according to MPs who attended the discussion. However, his Office is understood to have announced his readiness to quit minutes after the meeting ended. Attempts have also been made by protesters to enter his official residence, Temple Trees.

Wickremesinghe told party leaders he was taking the decision to step down in view of the fact that island-wide fuel distribution is due to recommence this week, the World Food Programme director is due to visit the country and the debt sustainability report for the IMF is due to be finalised shortly.

So as to ensure the safety of the citizens, the prime minister said he is agreeable to this recommendation by the opposition party leaders.

Journalists who were reporting near the prime minister’s residence were assaulted by police officers.

I wholeheartedly condemn the brutal inhuman attack on @NewsFirstSL journalists by police officers stationed to protect @RW_UNP. SHAME ON YOU, illegitimate Prime Minister.

Rooms, pools, balconies, stairwells and the grounds of the president’s house were full of protesters, according to footage flooding social media.

A journalist even tweeted that protesters are soon expected to host a press conference from the president’s residence.

Reports say that the president could have ‘fled’ well before the protesters entered his house. Footage circulated on social media showing purported luggage belonging to the president being hurriedly packed into a Navy ship, SLNS Gajabahu, at the Colombo Port.

Footage circulated on Social Media claim that luggage belonging to the President was hurriedly packed into a Navy Ship (SLNS Gajabahu) at the Colombo Port. #DailyMirror #SriLanka #SLnews pic.twitter.com/S07NRvZDZx

All parties ask PM and President to resign

The main opposition party Samagi Jana Balawegaya has meanwhile urged both Gotabaya and Wickremesinghe to step down, noting it will not attend any meeting called by the latter.

Wickremesinghe summoned an emergency meeting of political party leaders in which he is understood to have participated via a video link.

Opposition parties asked the prime minister and president to both resign, to which Wickremesinghe disagreed, tweeted member of parliament Rauff Hakeem.

“No consensus as PM disagrees. Speaker however decided to write to President and PM to resign as per overwhelming request,” Hakeem tweeted.

At Speaker’s Residence urgent Party Leader’s meeting. Several other Leaders including PM, AKD and Sumanthiran participated via zoom. Decision to ask both President and PM to resign. Speaker to take over as temporary President according to constitution. pic.twitter.com/RyauaIvCei

That’s right. I have suggested that the consensus of the Party Leaders that both Prez and PM should resign and it can also include the caveat that the PM does not agree to this!

After initially refusing to step down, however, it seems the PM warmed to the idea eventually, with news outlets tweeting that his office has announced that he is willing to resign.

At least seven persons, including two policemen people were injured in police shooting amidst the countrywide protests on Saturday. “Gunshot-like sounds” were heard in the vicinity of Gotabaya’s house, reported Sri Lanka’s EconomyNext outlet.

Protesters were holding Sri Lankan flags and helmets when they broke into the president’s residence, video footage from local TV channel NewsFirst showed.

Sri Lankan Police lifted the curfew that was imposed in seven divisions in the country’s Western Province, including Colombo early on Saturday.

Aragalaya 2.0 : Thousands of protesters are currently heading to Colombo in various modest of transport, braving fuel crisis, demanding President Gotabaya Rajapaksa's resignation. A container on the road bringing a group of protesters pic.twitter.com/aIJ3K9CJYp

Police in Colombo on Friday fired tear gas and used a water cannon on student protesters. The students staged a sit-in overnight, with other protesters including healthcare workers, clergy, trade unions and opposition supporters joining them on Saturday, organisers told reporters.

Sri Lankan media has reported that as the second Test with Australia is underway in the Galle International Cricket Stadium, protestors have made their way to the Galle Fort, overlooking the grounds, breaking police barricades.

The protest has made it on to the fort overlooking the cricket. The cops can't stop numbers like this pic.twitter.com/14HaQ2s7Qd

Removal of curfew after pressure from top bodies

The island nation has been crippled by a shortage of foreign exchange that has left it struggling to pay for essential imports of fuel, food and medicine. Its 22 million people have been bearing the brunt of record inflation, currency depreciation and rolling power cuts for months.

Many blame President Gotabaya Rajapaksa for the swift slide in living conditions, the worst since independence in 1948, which has sparked widespread protests that have sometimes turned violent. 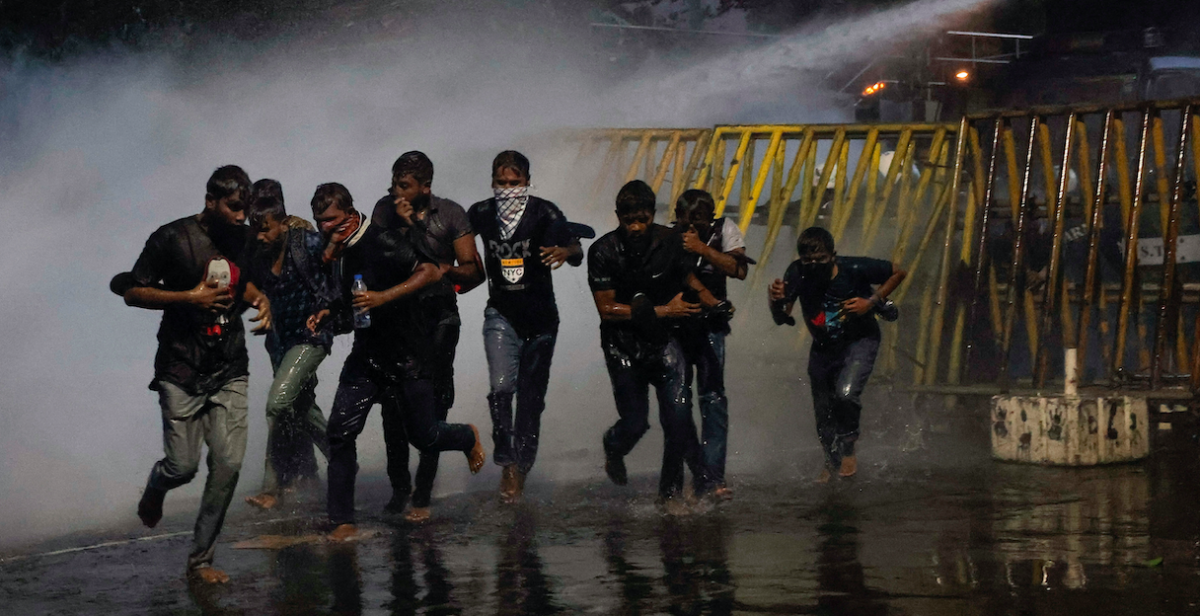 Police use tear gas and water cannon to disperse demonstrators near President’s residence during a protest demanding the resignation of President Gotabaya Rajapaksa, amid the country’s economic crisis, in Colombo, Sri Lanka, July 8, 2022. Photo: Reuters/Dinuka Liyanawatte

“People are dying in fuel queues and can barely manage three meals a day. This is what the president and his government have done to this country,” said Wasantha Mudalige, a member of the Inter University Students’ Federation that organised a march to the president’s house on Friday.

“We will not give up until this president and prime minister go home,” Mudalige said, referring to Ranil Wickremesinghe who was appointed as prime minister in May to replace Rajapaksa’s elder brother after he stepped down.

In a statement, Rajapaksa said the public were being misled and said essential supplies were scheduled to be delivered soon.

“At a time when successful solutions have been achieved to the existing problematic situation, the programme of the opposition political groups to mislead the people is very sad and unpleasant,” the statement said. “This will lead to set the country back once again.”

A spokesperson for the UN High Commissioner for Human Rights said there were concerns over Saturday’s protest turning violent.

“With security forces we have seen the use of lethal weapons in protests. This is why we are putting out this preventive call because we are very concerned about what might happen tomorrow,” Ravina Shamdasani told reporters.

Violence is not an answer. If you are going to protest, please do so peacefully. And reminding military & police to grant peaceful protesters the space and security to do so. Chaos & force will not fix the economy or bring the political stability that Sri Lankans need right now.

The Russian embassy in Colombo said that there is no threat to the safety of Russian tourists but asked Russian citizens to avoid visiting crowded places. The Australian government has also tweeted a similar message.

The country hopes to submit a debt restructuring plan to the global lender by August and raise additional funding via a donor conference after reaching a staff level agreement.

Note: This is a developing story and is being updated and republished as events unfold.