History reveals that a two-third majority for Sri Lanka’s Sinhala-centric parties have led to the introduction of new constitutions that centralised state power and created divisions amongst communities. 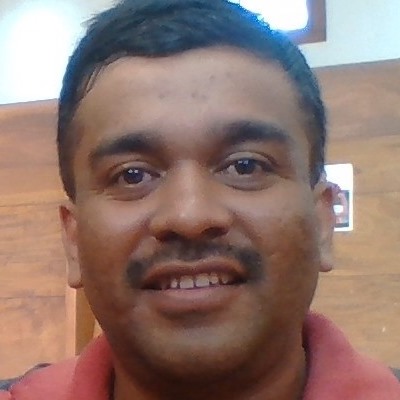 President Gotabaya Rajapaksa’s Sri Lanka Podujana Peramuna (SLPP) has secured a landslide win in the general elections held last week. For an election held in Sri Lanka under the proportional representation system, this victory is an unprecedented one. With the support of its allies, the SLPP has crossed the two-third majority mark in the next parliament.

The United National Party (UNP), which contested under the leadership of former Prime Minister Ranil Wickramasinghe, could not even poll 5% of the total votes in any of the electoral districts. The party won just one seat on the National List. An alliance led by a breakaway group from the UNP under the leadership of Sajith Premadasa, who lost to Gotabaya Rajapaksa in the presidential election in November last year, has come a distant second with 54 seats in the 225-member house. The Tamil National Alliance with a base among the Tamils in the North-East of the island has secured 10 seats.

The SLPP won the Sinhala-majority districts in the South by huge margins. Outside the North-East, nearly a dozen Muslim and Malaiyaha Thamil candidates representing a few minority parties who contested as part of the opposition alliance led by Sajith Premadasa have been elected to Parliament.

The failures of the previous regime to address the economic woes of the people contributed significantly to the emergence of the SLPP as a popular alternative. Governance and policy making were characterised by fissures and instability due to in-fighting between the UNP and the Sri Lankan Freedom Party, which attempted a coalition government between 2015 and 2018 under President Maithripala Sirisena. On the other hand, southern political leaders, civil society groups, student movements and trade unions could not challenge the entrenched Sinhala majoritarianism resolutely. The absence of a progressive alternative that could capture the imagination of the people made it easier for the chauvinistic SLPP to attract votes in large numbers in the Sinhala-majority districts in both the presidential election 2019 and now the general election.

In the Tamil-majority Northern Province, the Tamil National Alliance (TNA) faced a major setback. The party secured 6 out of the 13 seats available in the region compared to the 9 seats it had won in the last general elections. A huge chunk of its Tamil voters within the province have voted for parties aligned with the SLPP which contested on a platform of development and jobs.

The TNA’s failure to address the socio-economic problems faced by its Northern and Eastern constituencies, negotiate a political solution to the national question with the previous regime in Colombo which the party supported on various occasions inside and outside of parliament, and make headway in finding justice for war-time excesses has cost the party dearly in the elections.

Also read: Explainer: Why Sri Lanka’s Election Results Are Crucial for the Rajapaksas

Within Jaffna district, a significant chunk of the TNA’s traditional voters appear to have moved towards the Tamil National People’s Front and Tamil Makkal Thesiya Kootani, parties that placed a stronger emphasis on the right to self-determination of Tamils in the North-East of the country and international investigation into the war crimes committed by the state during the last stages of the war. But their campaign, giving a central place to these issues, did not find much traction outside Jaffna. The vote share of the two parties together could not even rise above 3% in any of the three districts in the Eastern Province.

The TNA’s performance was weak in the Eastern Province too. The party won only two seats in Batticaloa and lost the single seat it had won in Ampara district in the last general elections. The shift among Tamil voters towards parties that are aligned with the government indicates that the economic concerns of the Tamil population in the North and East cannot be sidestepped by political actors who prioritise self-determination over development. 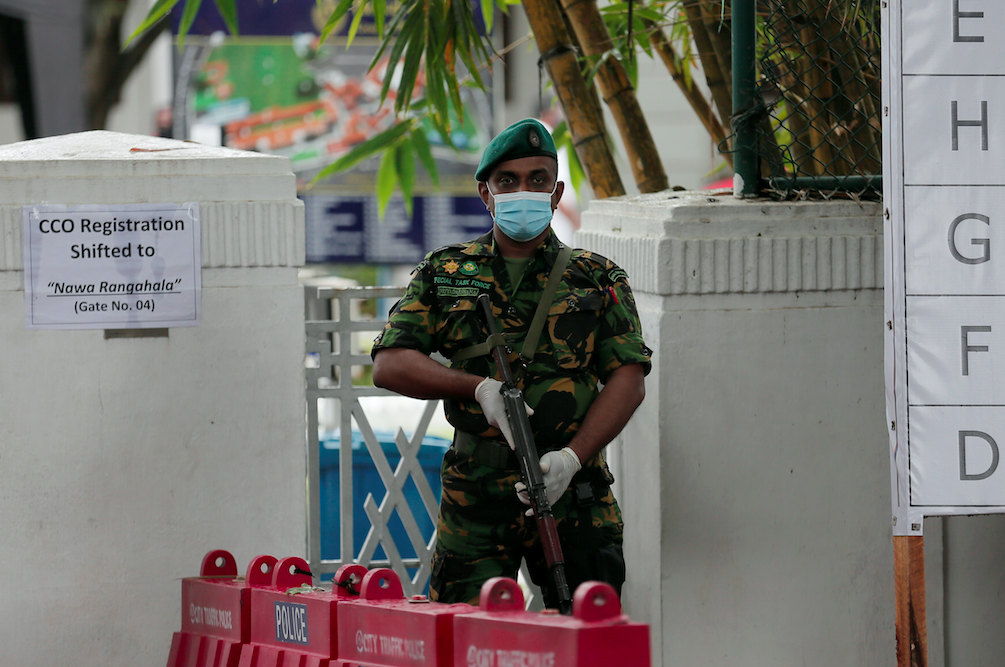 A Special Task Force member stands guard in front of a counting centre on the following day of the country’s parliamentary election in Colombo, Sri Lanka, August 6, 2020. Photo: Reuters/Dinuka Liyanawatte

Regime consolidation, militarism and the economy

Although the proportionate representation system has enabled minority communities, especially minority communities that live outside the North-East, to send their representatives to parliament in reasonable numbers, the massive victory of the SLPP, a party that occupies the far-right end of the Sinhala Buddhist ideological spectrum, poses a threat to the pluralistic cultural landscape of Sri Lanka and the peaceful coexistence of the different ethnic communities.

The country’s post-independence history reveals that the two-third majority that Sri Lanka’s Sinhala-centric parties secured in the past led to the introduction of new constitutions that centralised state power and created divisions among the communities. Such powerful regimes also crushed democratic protests and trade union activism.

With the electoral success last week, the regime consolidation which began in the early months of 2020 following Gotabaya Rajapaksa’s victory in the presidential is expected to go full swing. Since his inauguration, President Rajapaksa has permitted a greater role for the military in the governance of the country. Ex-military officials who backed him in his bid for the presidency were appointed to top administrative positions within various ministries and presidential task forces and committees.

The military has also played a major role in handling the COVID-19 pandemic, sometimes to the exclusion and marginalisation of medical professionals. With the victory in the parliamentary elections, an emboldened president might make new moves to expand the participation of the military in governance.

The COVID-19 crisis has created instability in the everyday lives of the people, although the government appears to have been successful in controlling the spread of the virus. The government’s economic relief to the poor during this crisis has not been adequate. Educational activities at schools and some universities have resumed only for a segment of the student population. Students from economically marginalised families and rural areas with limited or no access to the internet find it difficult to participate in classes conducted online. The tourism and hotel industries have suffered huge losses. The country might face a major economic crisis in the next few months. How will the government handle this crisis? Will it introduce welfare measures through re-distribution of wealth and resources? Will it resort to repression and authoritarianism as what Sri Lanka experienced during the previous Rajapaksa regime? 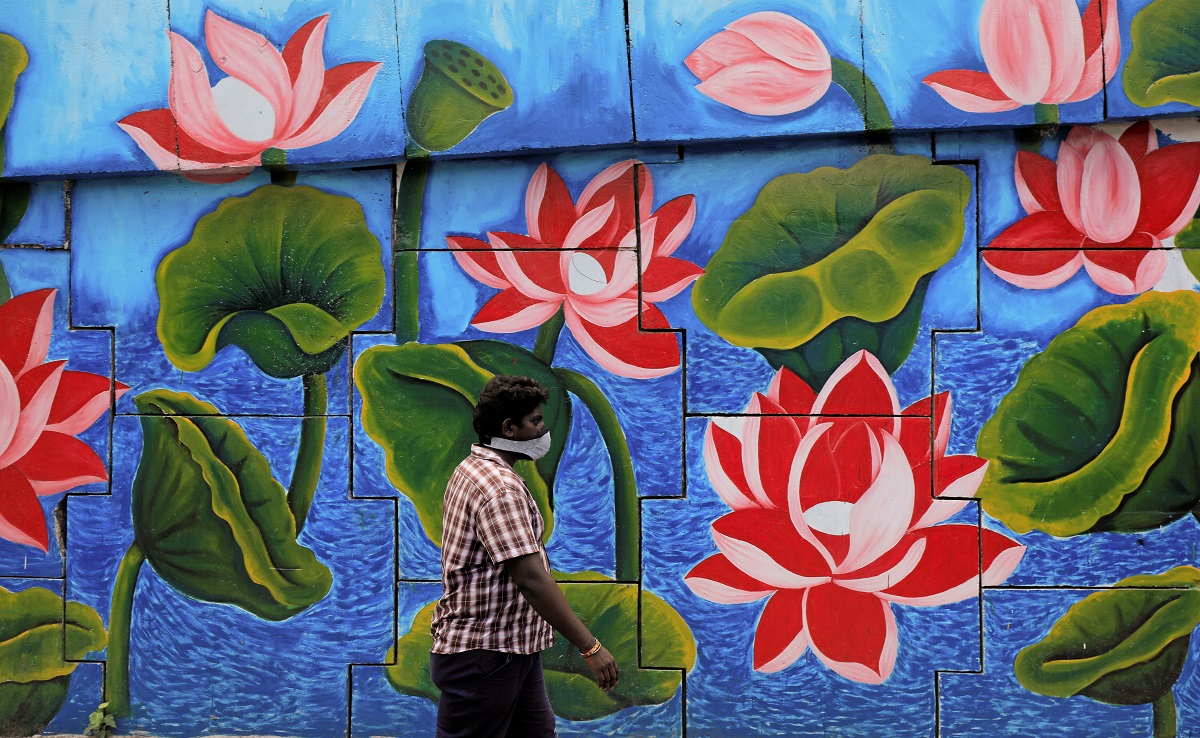 The Mahinda Rajapaksa regime that ruled Sri Lanka between 2005 and 2015, especially during its second term that started in 2010, adopted neoliberal economic policies that widened the faultlines with the Sinhala community. Waves of protests by workers in free trade zones, fishermen’s associations, students and university teachers exposed the government’s failures on the economic front. The government and its chauvinistic allies like the Bodu Bala Sena tried to deflect people’s attention from the economic miseries they faced towards divisive campaigns that demonised the Muslims. However, this trend could not be sustained for long.

In the North and East, the regime failed to address the political and economic concerns of the war-affected populations. Rural indebtedness increased due to microfinance schemes introduced by predatory companies. The people in the region had little or no control over the mega-development schemes designed and implemented in a centralized manner.

Tamil groups in the North launched protests against militarisation and land grab. Tamils’ attempts to memorialize the end of the civil war and militants who died during the armed struggle were often crushed by the military. Mahinda Rajapaksa’s defeat in 2015 happened mainly due to the economic failures of his regime, protests led by workers and minorities and a consolidation of democratic forces from all communities.

While some of the problems that bedevilled Sri Lanka during the previous Rajapaksa regime may re-emerge following the SLPP’s victory, the statements made by the current President and his top officers and some of the measures his government has taken so far to address important economic and political issues indicate that the new regime will move in a more militaristic and technocratic direction with moves to strengthen the power bloc comprising military officers and Buddhist monks who back the President.

The government appears to be keen to introduce key amendments to the constitution that might empower the executive president, dismantle the constitutional council which was created with a view to reducing political interference in the appointment members to various important commissions and even abolish the 13th amendment introduced via the Indo-Lanka Accord of 1987, which allows a small measure of autonomy to the nine provinces.

The militaristic, centralised approach to governance that the new dispensation is expected to adopt will not help the economic revival of the communities affected by the ongoing COVID-19 crisis. It is feared that the state might resort to authoritarianism in responding to protests and social unrest that an economic crisis might trigger. The surveillance mechanisms of the state have already expanded. Recent witch-hunts against activists from the Muslim community and dissidents, fund-cuts to the Open University of Sri Lanka, attempts to slash the independence of higher educational institutions, and increased Buddhist symbolism in the activities of the government all suggest that the state might take a more authoritarian and Sinhala nationalist turn in the future rather than support the welfare of the people.

Tamils and Muslims in the Northern and Eastern Provinces are anxious that Buddhisization of these two provinces may take an aggressive turn under the new regime. Tamil activists in the region also worry that the ultranationalist SLPP may even try to settle Sinhalese from the South in the two provinces in order to weaken the Tamils’ demand for self-rule in the region. Following the Easter Sunday attacks, the Muslim community all across the island has been facing increased threats from chauvinistic elements.

In order to challenge the existent and emerging forms of majoritarianism and authoritarianism, all forces that uphold democracy, pluralism and social justice in the island should work together. With the regime enjoying a two-third majority in parliament, key battles around economy, pluralism, independence of institutions and autonomy for the Northern and Eastern Provinces will have to be waged outside parliament. A consolidation of democratic forces and working people cutting across ethnic divides is going to be crucial in charting our resistance to the majoritarian, militaristic populism that Sri Lanka has now firmly been pushed into.

Mahendran Thiruvarangan is attached to the Department of Linguistics & English at the University of Jaffna.