Gotabaya Rajapaksa's has huge leads in the Sinhala-dominated districts, while ruling party candidate Sajith Premadasa is ahead in the Tamil-dominated areas. 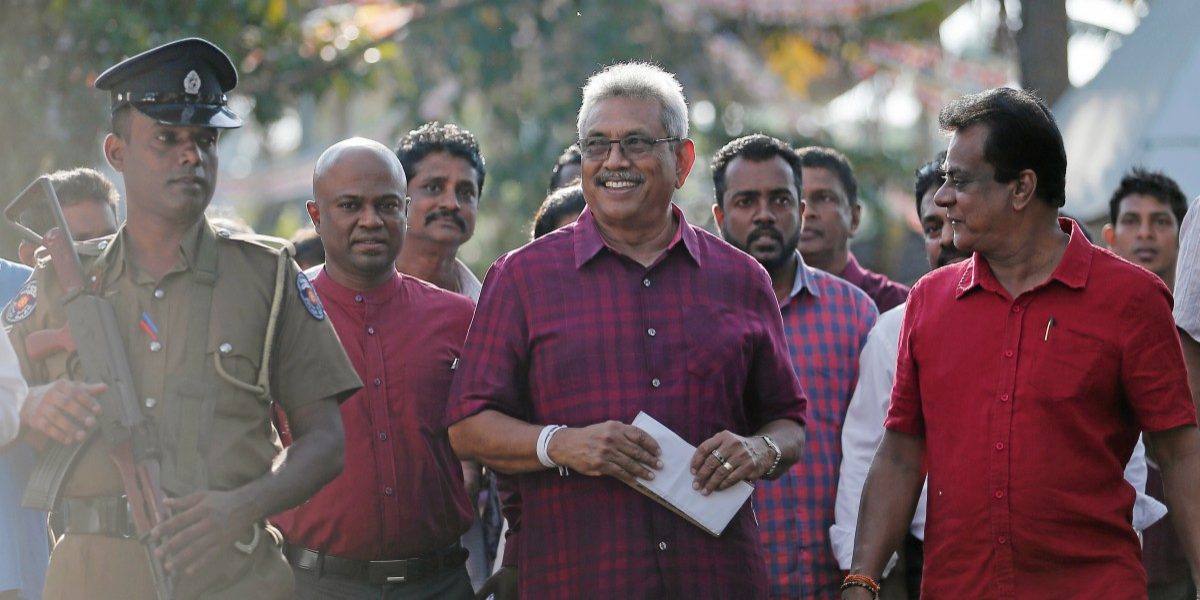 Colombo: Sri Lanka’s main opposition candidate Gotabaya Rajapaksa on Sunday took an unassailable lead over the ruling party candidate Sajith Premadasa in the hotly contested election that would decide the future course of the country amidst security challenges following the Easter Sunday bombings.

The 70-year-old former wartime defence secretary, the younger brother of former president Mahinda Rajapaksa, has swept the poll with over 60% margins in most Sinhala majority districts while his 52-year-old rival Premadasa has performed well in the minority Tamil-dominated north and east provinces.

Premadasa has garnered over 80% of the vote in Tamil areas, reducing Rajapaksa to less than 5% in some areas in the north.

In the Muslim-dominated Muttur in the east, Premadasa was a clear winner with 90% of the votes polled.

The poll on Saturday brought the curtains down on a campaign which was kick started on October 7 with the handing over of nominations. A record number of 35 candidates contested with 15.9 million of the island’s 21 million population eligible to vote.

The results trend shows that Rajapaksa is set to win outright at least 16 of the total of 22 electoral districts which went to polls.

Rajapaksa’s victory will mark the return of the family to the pinnacle of power in the island after they were surprisingly ousted in the 2015 presidential poll.

In the result declared so far from the sole polling division in the south of the country, Rajapaksa has won 65% against Premadasa’s 28%.

Postal votes are cast in advance by officials drafted for election duty on polling days.

The remaining candidates who contested the election were far behind in numbers. 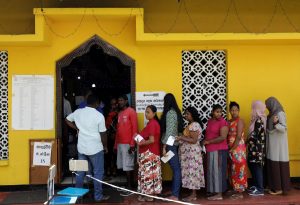 People stand in a line to cast their vote during the presidential election in Colombo, Sri Lanka November 16, 2019. Photo: Reuters/Dinuka Liyanawatte

Sri Lankans voted on Saturday to choose a successor to President Maithripala Sirisena amid multiple poll-related incidents, including an attack on the minority Muslim voters.

As many as 12,845 polling stations were set up across the country.

This poll will make record as the election with the largest number of polling stations and the longest 26-inch ballot paper.

According to observers, with pro-China Rajapaksa in the fray, India is keeping a close watch on the election results as its outcome will have a bearing on the country’s presence in the Indian Ocean region where Beijing is increasingly making its inroads.

China, which has acquired Sri Lanka’s Hambantota port in 2017 as a debt swap, has been ramping up its ties with the island nation and expanded its naval presence in the Indian Ocean with an established logistics base in Djibouti

China in July gifted a warship to Sri Lanka, in a growing sign of its deepening military cooperation with the strategically located island nation in the Indian Ocean.

The Lanka election took place nearly seven months after homegrown radicals pledging loyalty to the Islamic State terror group detonated suicide bombs at three churches and three posh hotels, killing 269 people and seriously hitting the tourism industry which is one of the main forex earning sectors of the country.

The candidate who obtains over 50 per cent of the votes will win the presidency. The ballot also allows voters to choose their three top candidates in order of preference, which will determine the winner if no candidate secures over half the first place votes.

Those preferences will be used to tally votes for the top two candidates to decide the winner. Such a process has not happened in previous elections because one candidate has always crossed the 50 per cent mark.

Premadasa, the ruling United National party (UNP) candidate, banked on his ‘man of the commoner’ image – a legacy of his father Ranasinghe Premadasa, the country’s president between 1989 and 1993 until the LTTE assassinated him in 1993.

Premadasa senior was considered as the “man of the poor”.

The Rajapaska senior’s legacy of ending the Tamil separatist war has made him the darling of the Sinhala Buddhist majority. Gotabhaya was his top defence ministry official who supervised the military operations against the LTTE. While doing so, he acquired the reputation of a ruthlessly efficient administrator.