Edhi, who built a nationwide network of humanitarian centres in Pakistan, occupies a prominent place in the Bangladeshi photographer's moral imagination. 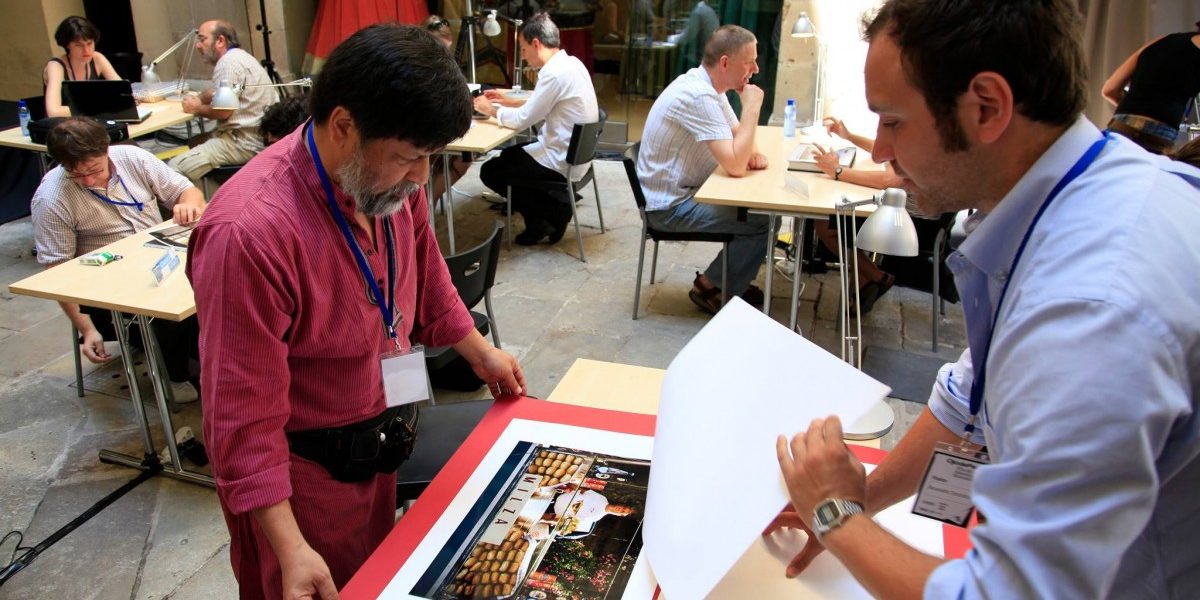 Friends of Shahidul Alam drawing attention to his incarceration since August 5 may perhaps be forgiven for invoking the menace of the hegemonies he challenged. By this I refer to the push for his release included in the international coverage on the tens of thousands of protesting schoolchildren, whose voices Alam amplified.

For decades, Alam has done the hard work of rebalancing social and media inequalities. But because his criticism of Prime Minister Sheikh Hasina’s goons and government on Al Jazeera was perceived as passing judgement, he was dragged out of his Dhanmondi flat by plainclothes officers without a warrant and produced barefoot in a Dhaka courthouse 20 hours later.

Born in Dhaka in 1955 (his mother told him he was an accident), Alam discovered photography when he was stuck with a camera he had bought for a friend. A PhD candidate in Chemistry at the University of London, he felt comfortable working with chemicals in the Bedford College darkroom, which he described as a damp place that smelt like sulphur. Image making was far too expensive an obsession for a research student – but it also skilled him in becoming resourceful. In 1984, he returned to Bangladesh with a PhD and the 1983 Harvey Harris Trophy for the best photograph of the year at the London Arts Council.

Alam joined the agitations that brought down the Hussain Muhammad Ershad regime in 1990. Requiring inexpensive ways to communicate, he introduced digital technology to the country by setting up Bangladesh’s first email network in 1998 and developing a Bangla font for the internet. He learnt that it wasn’t enough to make good images – images need to get past gatekeepers who are all too often dismissive or disinterested. With anthropologist Rahnuma Ahmad, his life partner and fiercest critic, he set up the Drik picture library that also constitutes as an archive of images of the 1971 liberation war. He registered the award-winning Drik agency in 1989 based in his home – the bedroom serving as office space, the washroom as darkroom. Drik in Sanskrit means vision, inner vision and philosophy of vision.

In 1990, he set up the Bangladesh Photographic Institute. In 1993, he opened Pathshala, which is considered one of the finest schools of photography in the world. He co-founded the pioneering Majority World agency in 2004, providing image-makers from all non-Western countries a global platform. The term ‘majority world’ asserts that the majority population of our planet, residing in Latin America, Asia and the Middle East, has its own social and cultural capital that can no longer be marginalised.

Alam has trained hundreds of professional journalists, camera people and photo editors and nurtured a community of majority world photographers who now have the institutions needed to compete with peers in the West. Drik LEARN initiative brings media opportunities to children in rural areas. Crowning his empire is Asia’s most important photography festival Chobi Mela (picture fair), inaugurated in 2000, which promotes photographers from across the world.

Alam first met Pakistani social worker Abdul Sattar Edhi in 1995 in his sparsely furnished room in downtown Karachi. “He had an easy charm that came from living a simple life and having little to hide.” Sitting on his charpoy, he explained how things started.

Edhi was born in Bantva in Gujarat in India. He arrived in Karachi during the Partition when displacement, dispossession and an administrative crisis were transforming the demographics of the new capital and port city. When he learnt that there was only one ambulance, he opened a dispensary, hired a physician and placed a tin box outside for donations.

With a donation from a businessman in his community, he purchased his first ambulance – an old Hillman van worth Rs 7,000. Eventually, he went on to run maternity homes, shelter homes, animal homes, a coastal rescue operation, public kitchens, funeral services, a countrywide emergency ambulance service, and international rescue and relief operations on an entirely non-discriminatory basis.

“We were regularly interrupted by people coming in with requests, and Edhi responding to minor crises. Then we heard about Fahim Commando, the MQM leader, having been killed,” Alam wrote. Fahim’s body was shifted to a courtyard next to Edhi’s living quarters for the ritual bath. Alam took an image that was simple and honest, asserting an energy and dignity reminiscent of his self-portrait of teaching photography to children in Phandauk. 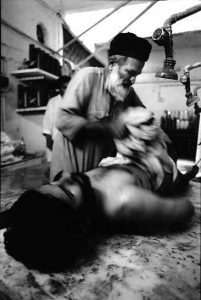 “Fahim and his comrades had apparently been caught in an ambush and all four had died. They had been in police custody, but the police had all escaped and not one of them had been injured. Edhi was not judgemental. Fahim was another man who needed a decent burial. As I watched him bathe the slain MQM leader, I could see the burn marks on the bullet holes on the commando’s body.”

Nine years later, Alam covered the foundation in a photo essay commissioned by Saudi Aramco and written by Richard Covington. ‘Humanitarian to a Nation’ was republished in best-selling author David Elliot Cohen’s What Matters as ‘What One Man Can Do: The Amazing Life of Abdul Sattar Edhi’.

On December 27, 2008, Alam’s 1995 image drove me to visit Edhi (with a vague hope of running into the photographer too). On the same day, Israel launched the deadliest attacks on Gaza since the 1967 war. Wanting to cross the Gaza border, Edhi waited in New York for several weeks for permission from the Egyptian authorities. Unsuccessful, he returned to Karachi where I got to meet him in the company of Shahidul Alam, who was on a stopover.

A year later, Alam emailed and said he was in Amsterdam to serve on the jury of World Press Photo competition. He wanted to show me what he was working on. He took me through a set of images on his screen. A rice paddy at night… an autopsy table… he was addressing extra-judicial killings in Bangladesh.

I knew from a threatening situation we experienced on the outskirts of Karachi that Alam was prepared for any trouble while travelling. But his images on extrajudicial killings made me realise that someday the Bangladeshi state would come after him in his own country for reasons the Pakistani state did not go after Abdul Sattar Edhi.

Edhi stepped in where the Pakistani state failed and the state came to rely on him. For instance, his ambulance service has been called to pick up the bodies of the extra-judicially encountered in army operations. Fishermen from India, imprisoned for drifting into Pakistani waters, have received his assistance in their repatriation.

His non-discrimination earned him the wrath of the right wing clergy who branded him a traitor and disbeliever particularly for what they find promiscuity promoting cradles that have the purpose of discouraging infanticide and ending late-term pregnancies. On the other hand, dacoits, terrorists, insurgents or militants also didn’t hinder his work because they understood that he is the only one who would help them too.

Edhi was known to be critical of central power holders and the ruling elite, but he was also detached from the game of politics. His subaltern spirit of social justice and equality did not pose a threat to political power or the status quo.

Edhi occupies a prominent place in Alam’s moral imagination and his staged photographs of Abdul Sattar Edhi on his charpoy at breakfast with his wife Bilquis reflect that. Edhi and Alam are both counter hegemonic forces, visionary, working in the sub-continent’s harshest realities, epitomising the potential of personal initiative. But the photo essay has a serenading quality to it and does not reveal the ambiguities that on the one hand contribute to Edhi’s achievement and on the other prevented him from changing the system even if that is what he once wanted.

On July 29, protests in Dhaka were sparked when a boy and a girl were killed by a speeding bus. Alam took to the streets with a camera mounted on his bicycle to explain the situation. On August 2, he posted a video of students taking matters into their own hands and enforcing traffic laws.

“Ministers have been told to step down from their cars and walk or take another car because the cars they are driving do not have the proper documentation,” he says. In other videos Alam speaks of a war zone. At one point, his camera registers the pro-government and police supported Chhatra League goons smashing his camcorder as he filmed them chasing students.

“It is an unelected government so they do not really have the mandate to rule but they have been taking over by brute force,” he explained in the interview with Al Jazeera. Alam has now been charged with giving ‘false information’ and making ‘provocative comments’.

“I remember Shahidul Alam as a good man. He was also a good friend of Edhi,” says Faisal Edhi, who has taken over his father’s work since Edhi passed away in 2016. “He worked for Edhi Foundation’s mission and he covered us. He is a very nice man, professional. I don’t think the allegations against him are true. They are politicised. He should be released soon. This injustice should stop.”