Interviews with a close political colleague of the prime minister are the first time that evidence has pointed towards the prime minister's direct involvement. Under the current regime, there have been hundreds of secret detentions by law enforcement authorities, many involving the opposition. London: Bangladesh’s prime minister signed off on secret detentions by the country’s intelligence services as part of a widening crackdown on the opposition, a close associate has claimed.

Sheikh Hasina is said to have given the country’s military intelligence agency Directorate General of Forces Intelligence, known as DGFI, “clearance” to illegally pick up two men linked with the opposition who were secretly detained for months.

The whereabouts of one of the men remains unknown, 20 months after he was detained.

Bangladesh has faced severe criticism from human rights organisations over its record of enforced disappearances.

Under the current administration, there have been hundreds of secret detentions by law enforcement authorities, many involving the political opposition, with dozens of victims turning up dead or never returning.

Early last year, the United Nations Working Group on Enforced or Involuntary Disappearances, and other UN experts, called on “Bangladesh to act now to halt an increasing number of enforced disappearances in the country”.

At the end of 2017, the Bangladesh human rights organisation Odhikar had identified over 180 cases of disappearances in the previous two years of which the dead bodies of 28 had subsequently been found, and the whereabouts of over 25 people remain unknown.

The interviews with the associate, a close political colleague of Sheikh Hasina, are however the first time that evidence has pointed towards the prime minister’s direct involvement in secret detentions.

Bangladesh Law enforcement authorities and government officials have repeatedly denied the detentions. The associate spoke on condition that his identity would not be disclosed, fearing repercussions. The revelation comes as the prime minister’s son Sajeeb Wazed Joy wrote an article denying the government was involved in any disappearances.

In November 2017, The Wire revealed that the academic Mubashar Hasan was picked up and was being secretly detained by DGFI, after which the Bangladesh authorities blocked the website. Hasan was subsequently released after six weeks.

The political associate of the prime minister said that the disappearances of both Mir Ahmed Bin Quasem, a British-trained barrister who was picked up from his flat in Dhaka in front of his wife and children, and Hummam Quader Chowdhury, who was taken from his car as his mother watched, were “authorised by the prime minister” in August 2016 after DFGI approached Sheikh Hasina with a “concocted” story about a conspiracy between them against the government.

The men were picked up six weeks after militants linked to the Islamic State stormed on July 1, 2016, an upscale restaurant in the capital city of Dhaka killing 20 foreigners, an attack that followed a string of murders of atheist bloggers and others belonging to religious minorities.

The Awami League government was intent at that time in pinning responsibility for the attacks on the opposition parties.

“I think it could also have been the intelligence agencies trying to take credit with the prime minister. … They do some high profile things like that,” the associate said.

Bin Quasem, also known as Arman, is the son of a Jamaat-e-Islami leader who was subsequently executed for crimes committed during the country’s independence war. Chowdhury’s father was a prominent leader of the Bangladesh Nationalist Party and was also executed for 1971 war crimes.

Whilst Chowdhury was released onto the streets of Dhaka in April 2017 after disappearing for seven months, Bin Quasem remains missing.

Chowdhury and his family have refused to speak about his ordeal.

The prime minister’s close political associate said that Chowdhury was first detained in the custody of detective branch of the police, but that “after they picked up [Quasem], then both of them were handed to DGFI”.

Speaking specifically about Chowdhury, the associate said that “Without her clearance, they wouldn’t pick him up” and that “of course” Hasina knew that “[Chowdhury] was continuing to being detained.”.

Michael Polak, the UK lawyer acting for Mir Quasem said, “This is evidence that the prime minister had a direct hand in Arman’s fate and should she wished she could release him tomorrow.”

Tahera Tasneem, Quasem’s sister said, “Our entire family is shattered in grief and sorrow. We want him back as soon as possible.”

The political associate also suggested that a month before, Sheikh Hasina had known about the month long secret detention of Hasnat Karim, a British Bangladeshi, and of Canadian-Bangladeshi student Tahmid Hasib Khan who were suspected of being involved in the terror attack at the Holey Artisan Bakery café in July 2016. Both men, guests at the restaurant on the night of the attack, were subsequently formally arrested, and Karim has remained in prison since then, without charge.

Analysts said that the associate’s claims about the prime minister’s involvement are not unexpected.

Mohammad Ashrafuzzaman, of the Bangladesh desk for the Asian Human Rights Commission, said: “I am not surprised at all that the Prime Minister is said to have authorised secret detentions and disappearances.” He said that cases they and their sister organisation the Asian Legal Resource Centre have investigated point towards the Sheikh Hasina “being directly involved in instructing the state agencies to disappear high profile people having political affiliation with the opposition”.

Charu Lata Hogg, Associate Fellow, Asia Program at Chatham House, added, “The spate of extra judicial executions and disappearances has persisted. These new allegations come as no surprise as state complicity in such rights abuses has long been documented by rights groups.”

Sheikh Hasina has not responded to repeated requests for comment on the allegations.

The political associate said that a number of different state agencies are involved in the dozens of people picked up and secretly detained including the paramilitary organisation, Rapid Action Battalion (RAB), the detective branch of the police, the counter-terrorism unit, the special branch and DGFI. 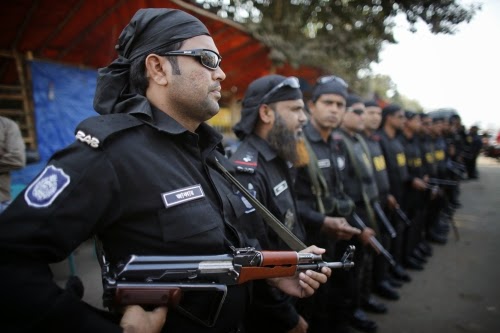 “The most active used to be RAB, then they felt that RAB was getting a very bad reputation, then they said ok let the DB do it. …Then DB started these so called encounters and shoots outs, things like that so what RAB was doing DB also started doing, they were also sanctioned to do it. So there was not much difference between the two of them.

“In the case of Humam and Mir Quasem’s son, unfortunately the initiator was DGFI. …That is a different kettle off fish completely.”

The Awami League came to power in 2009 after a landslide victory, but only remained in government after winning controversial elections boycotted by the main opposition parties the Bangladesh Nationalist Party and the Jamaat-e-Islami. New elections are due later this year. Commentators question whether it will be a free and fair contest.