Past Haunts the Present in Pakistan's Only Hindi Department

Prejudice is thwarting the promotion of Hindi language in the Islamic Republic of Pakistan. 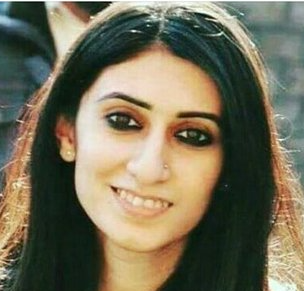 On a cold, breezy afternoon, there is usual fervour on Kutchehry Road in Lahore. Rickshaws ply to and fro, small crowds gather outside shops that line the narrow street, a little boy sells newspapers around the corner, the tea stall is cramped with people, and college students loiter around the age-old Oriental College building. The back gate of the glorious red brick building of Punjab University’s old campus opens into this historical street. It is the same Kutchehry Road that Bhagat Singh took for escaping after pumping bullets into British police officer John P. Saunders.

From the back gate, the left path leads to a small garden lined up with trees. Behind the bushes is a rusty, half-concealed blue display board on a wall.  As one draws close, a rather surreal moment unfolds – the board reads in English, Urdu and Hindi, something one would expect to see only in pre-Partition Lahore.

‘Hindi Department, Hindi Vibhagh, Shoba-e-Hindi’, are the words in all three languages displayed on the board outside the building. 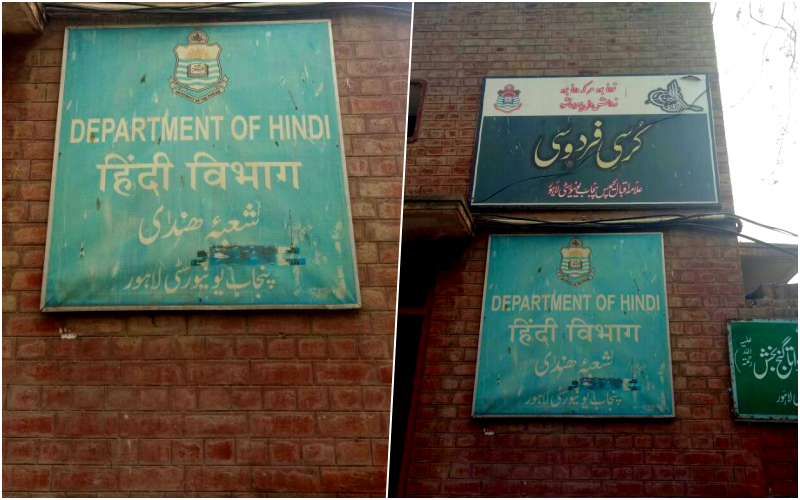 The shabby board reads in English, Urdu and Hindi, something one would expect to see only in pre-Partition Lahore. Credit: Special arrangement

An old man guides me to a claustrophobic staircase that takes me to the first floor where the Hindi department is located. The shabby but spacious hall has four rooms: a reception, a library, a classroom and an office.  The cracked walls, flaking paint, broken windows and crumbling doors tell gloomy tales of a lost heritage.  At the other end of the staircase is another hall that might have served as a classroom at some point. Placed inside are 12 chairs covered in dust, an antique cabinet, and a Hindi varnamala (alphabet) chart hanging on the wall as a teaching aid. As I stand in the hall, poet Gulzar’s couplets linger in my mind:

I hear somebody call me from behind. “My name is Mohammad Shahzad and I am a junior clerk here,” he says while welcoming me to the admin room. “We have a staff of four. Other than me, there is a senior clerk, a librarian and a peon. And we all know Hindi,” he tells me with a sense of gratitude.

“The department was re-opened in 1983 during late President Zia-ul-Haq’s regime”, he tells me.

The University of Punjab was formally established in October 1882. After three universities were set up in Bombay, Madras and Calcutta, Punjab University was the fourth one to be established by the British in Lahore. Most of the colleges affiliated with the University of Punjab were on the Indian side. Hence, at the time of Partition, it was decided that the University of the Punjab, Lahore, would conduct examinations on both sides of the border. As narrated by Krishen Khanna in the book ‘City of Sin and Splendour: Writings on Lahore’, the registrar of the university, Madan Gopal Singh, had to travel to Lahore from Shimla to fetch some university records. He left a note for Khanna’s father saying, “See you when I get back, that is if I get back.” His fears were well founded as he was murdered on the campus.

Following bloodshed in Lahore, part of the university was relocated to East Punjab in September 1947. For about a decade the university had no campus but had teaching departments functioning from Hoshiarpur, Jalandhar, Delhi and Amritsar. In 1956, the Panjab University campus was set up in Chandigarh, India.

The Oriental College was founded in 1870. The focus was on classical languages – Arabic, Persian and Sanskrit – and oriental indigenous languages – Urdu, Hindi, Punjabi and Pashto. In 1928, the Urdu, Hindi and Gurmukhi research departments were also established. After Partition, the departments of Sanskrit, Hindi and Gurmukhi were shut down and instead M.A. classes in Urdu were initiated. At present, the department offers courses in Arabic, Chinese, Russian, Hebrew, Greek, Turkish, Portugal, Latin, Persian, Kashmiri and Hindi.

“The class is going on but you can visit the library”, says Shahzad.

As I enter,  a woody scent of old books emanates from the library that stands right opposite the admin room. There’s a huge collection of Hindi books. “Every year, the department orders books from India. The books are ordered through the Academy Book Centre whose bookshop is located on Temple Road.” says the librarian. The shelves are divided into different sections – poetry, literature and critique. I chance upon several interesting books in Hindi by authors such as Munshi Premchand, Bhisham Sahni, Saadat Hassan Manto, Amrita Pritam, Faiz Ahmed Faiz and Ghalib.

Heaps of partly destroyed, dusty old books are placed on five rotting shelves in the left corner of the room. Interestingly, the numbered shelves have notes glued to them that say Tulsi Ramayana, Mahavira and Hindi magazines. The librarian tells me that these books are from the Sanskrit department that was closed down in 1947.

I see two students coming out of the classroom followed by Shabnam Riaz, in-charge of the Hindi department. On my request, she invites me to the classroom.

I realise that the classroom is also being used as office space. The room was divided in two. In one part, there is an office desk with four chairs, a bookshelf and a cabinet. In the other, there are three vintage sofas, a small table and a whiteboard on the wall. Riaz is an alumnus of the Hindi department of Punjabi University, Patiala in India.

“I am working in the Hindi department since 2002. The department was in shambles when I had joined.  Before 2002, only a certificate course in Hindi was offered. I worked hard to introduce the one-year diploma degree in Hindi which wouldn’t have been possible without the support of the then dean of faculty, Akram Chaudhry,” she says.

She tells me not many students in Pakistan are interested in learning Hindi, adding that “every year, the number of students varies between five and ten.”

The two students I meet are employees of the ministry of foreign affairs. “We sometimes get letters in Hindi which need to be translated and hence, we are required to know the language,” says Maqsood Ahmad.

This quenches my curiosity about Zia-ul Haq’s interest in re-starting the department of Hindi in 1983. Other than Punjab University, Lahore, the military-run National University of Modern Languages in Islamabad, offers a certificate course in Hindi. It’s interesting to note that Hindi classes continue to be held at Punjab University where the Jamat-e-Islami’s student wing has been strongly opposing the music department.

As we continue to talk, Riaz mentions the names of some renowned Hindi writers and poets who are taught as part of the syllabus. These include Kabir, Surdas, Dharamveer Bharti, Malik Mohammad Jayasi, Munshi Premchand, Usha Priyamvada, Manu Bhandari, Shriram Sharma Acharya, Bhisham Sahni, Kamleshwar, and Ramchandra Shukla. When asked about teaching religious texts, she said “We avoid that but sometimes the texts can be used as a reference.”

Riaz feels if the department shifts to the New Campus, more students would be interested. “We have raised the issue with the vice chancellor Zafar Moeen Nasir but the request hasn’t been accepted so far”, she says, adding that a proposal for a M.A. degree programme in Hindi, is also “pending approval’.

I briefly get to meet the dean Saleem Mazhar whose office is right opposite the Oriental College building.  Mazhar says  Oriental College has a certain historical significance and moving only the Hindi department to the New Campus wouldn’t be appropriate. “I agree that many times the Mall Road is blocked due to traffic or protests, which creates difficulties for students. However, I would want classes from all departments to take place at both the old and new campuses so that students have a choice”, he says. Then, with a smirk, he says, “I am pushing the vice chancellor to introduce a M.A. Hindi programme because it is more important to learn the language of enemies than friends.”

Having  learnt Hindi with help from my friend Somnath Bhattacharya in Jamshedpur, India, the dean’s statement pushed me to dig deeper into the interest of Pakistanis in Hindi language. Akhtar Ali, visiting professor at Government College University who teaches Hindi as an elective course in the Urdu department, says: “I was enrolled in the first batch of the Hindi certificate programme at Punjab University. I wanted to formally learn Hindi mainly because I was fascinated by it. Also, Hindi and Urdu are essentially the same languages written differently.”

Zakia Khurshid, an alumnus of Punjab University’s Hindi department, says, “My grandmother who was from Bhopal could read and write Hindi. As a child, I would often see her writing in Devnagri script and that’s what motivated me to learn”. 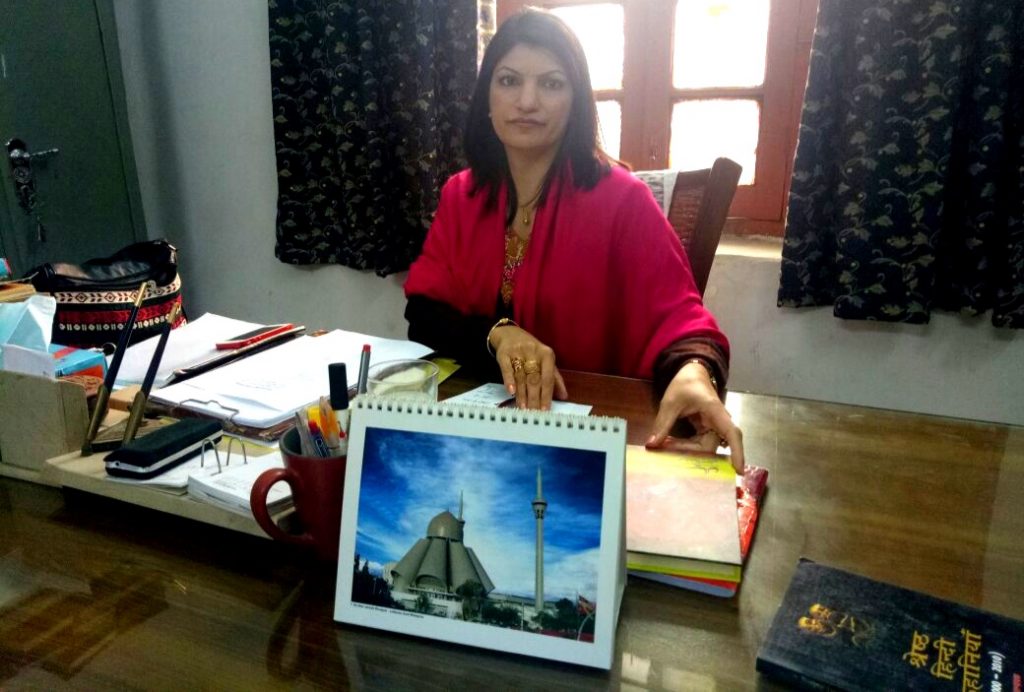 Abdal Ahmed Jafri, author of ‘Saadat Hasan aur Manto’ – a compilation of writings by prominent Urdu writers, says his mother was from Meerut and taught him Hindi when he was ten years old. “Arabic and English were already foreign languages; my first choice was to learn Hindi. I am a film freak and when Amitabh Bachchan’s movie Mard released, I read the Hindi title on screen for the first time. I would also excitedly read song titles while watching Chitrahaar on Doordarshan.”

While walking back from Oriental College to the Hindi department block in the Old Campus, Shahzad tells me about the Hindi lecturer, Tanveer Ghulam Hussain. The fourth room in the hall is her office.  In the clutter on her desk, I see several Hindi course books and short stories. A warm, friendly woman in her mid-30s, Tanveer is a lecturer at the department since 2011. She is a Punjab University Hindi department alumnus and is currently pursuing her Ph.D in Urdu literature.

The discussion drifts to Urdu and Hindi literature. Tanveer feels sad that Hindi books are not readily available in Pakistan. “While institutes in India such as the Aligarh Muslim University and Jamia Millia Islamia still have Urdu departments, it is prejudice in Pakistan that doesn’t allow for promotion of Hindi”, she says, adding that despite having the largest population of Hindus, none of the universities in Sindh have set up a Hindi department.

This reminded me of Jaun Elia who, in the preface of his first book Shayad, regretted the politicisation of his beloved language Urdu ­– which had merely become a ‘Muslim language’ ­­­– and wondered if other languages of the sub-continent could be mocked similarly. Little did he know about the fate of Hindi in the Islamic Republic of Pakistan.

Sehyr Mirza is an independent journalist.